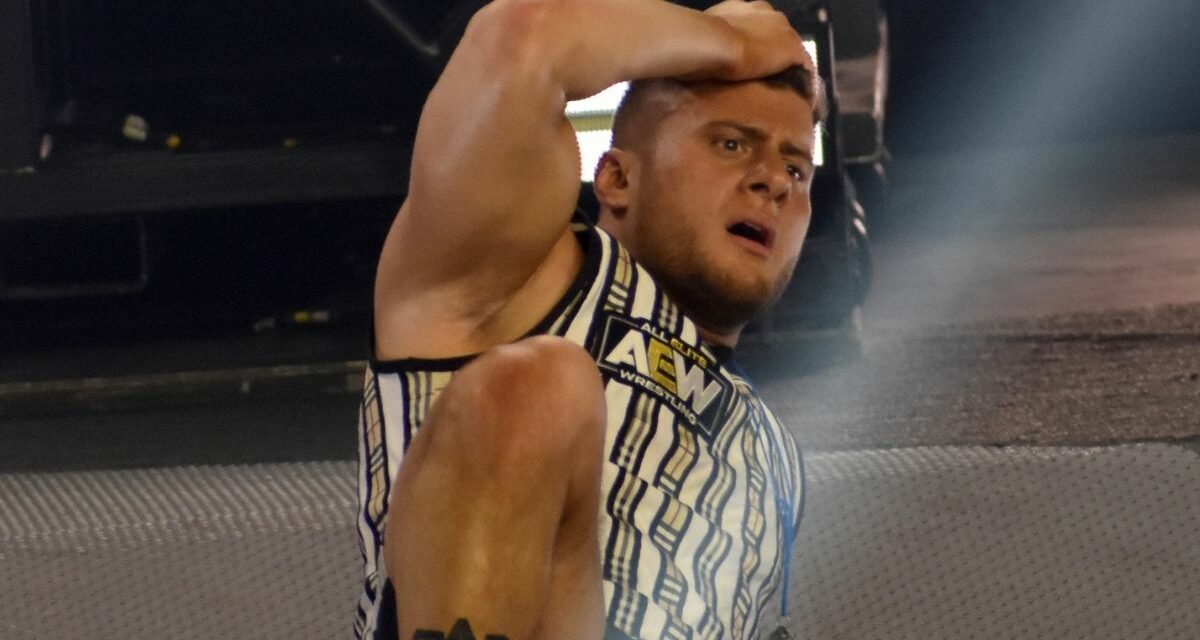 Hard to believe that Double or Nothing is this Sunday and that this is the third year Anniversary of AEW’s debut. With that being said, there’s a lot to be done on tonight’s show. A few of the finalists for the Owen Hart Foundation Tournament will be decided tonight. Wardlow needs to beat Shawn Spears in a cage match if he wants to get his hand on MJF and the Ring of Honor tag team championship will be defended tonight. Let’s get to it.

MJF does his due diligence “checking” Wardlow for any foreign object. MJF “can’t” find the handcuff keys, giving Spears the opportunity for a cheap shot. MJF with an eye rake and then teams up with Spears to slam Wardlow into the cage. Spears runs into a back body drop. MJF taunts Wardlow, because Wardlow can’t touch him. Wardlow wants the cuffs off, so he breaks them himself. He tosses Spears around the ring. Wardlow tosses Spears to the mat and follows with a senton. He covers, but MJF refuses to make a count. Wardlow goes for the powerbomb on Spears, but MJF kicks him in the groin. Spears hits the C$ but Wardlow kicks out even with the fast count. Spears goes outside the cage, but he needs a pin or submission to win. He grabs the chair. MJF holds Wardlow. Spears takes a swing as Wardlow falls down and he cracks MJF right in the head. Wardlow rises behind Spears with a look on his face. Wardlow hits a Symphony of Powerbombs. A new ref runs in. Wardlow calls for another one. He power bombs spears and covers by stepping on his chest. The ref counts three. 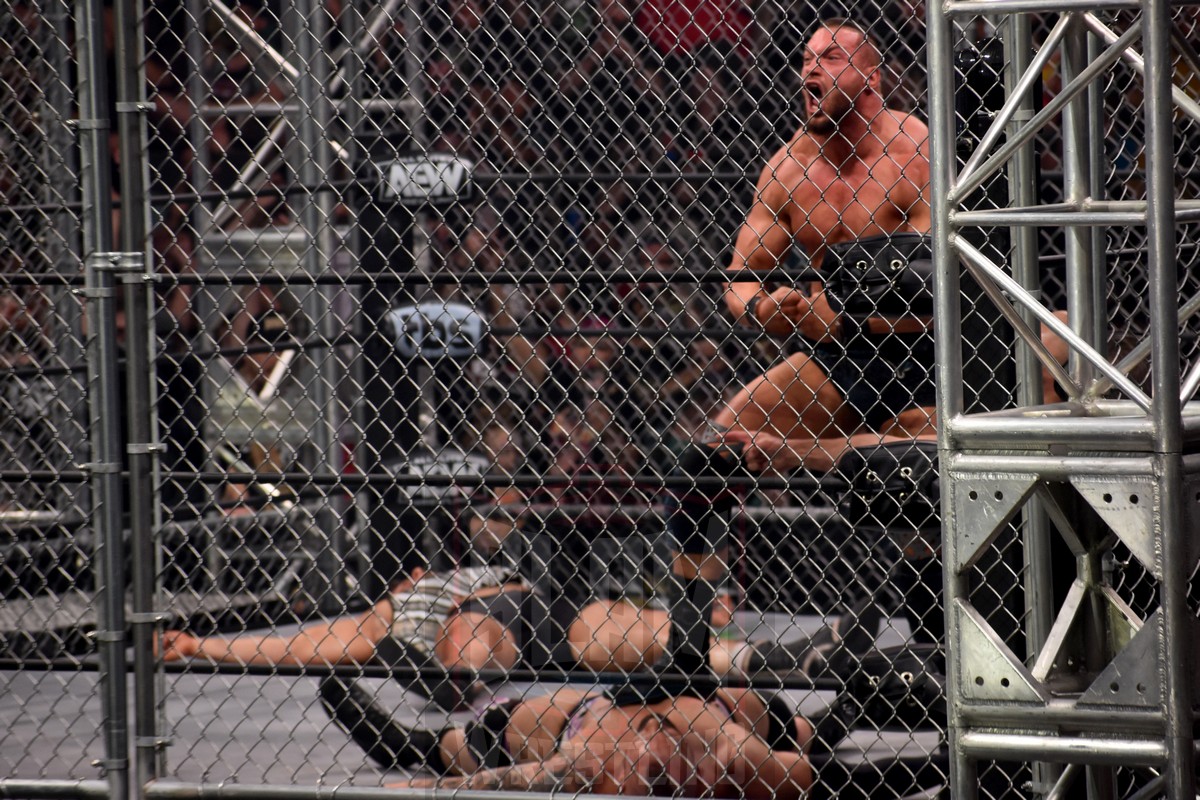 Wardlow stands over Shawn Spears at AEW Dynamite on Wednesday, May 25, 2022 at Michelob Ultra Arena at the Mandalay Bay casino in Las Vegas. Photo by Ben Lypka

After the match, Wardlow fights off security as MJF escapes the ring. One poor guard gets power bombed into the cage. MJF celebrates  a top the cage, calling out MJF.

The Jericho Appreciation Society doesn’t appreciate one of the AEW staff members wearing a Jon Moxley shirt. Jericho throws a fire ball in his face. That’s a bit of an over reaction if you ask me. 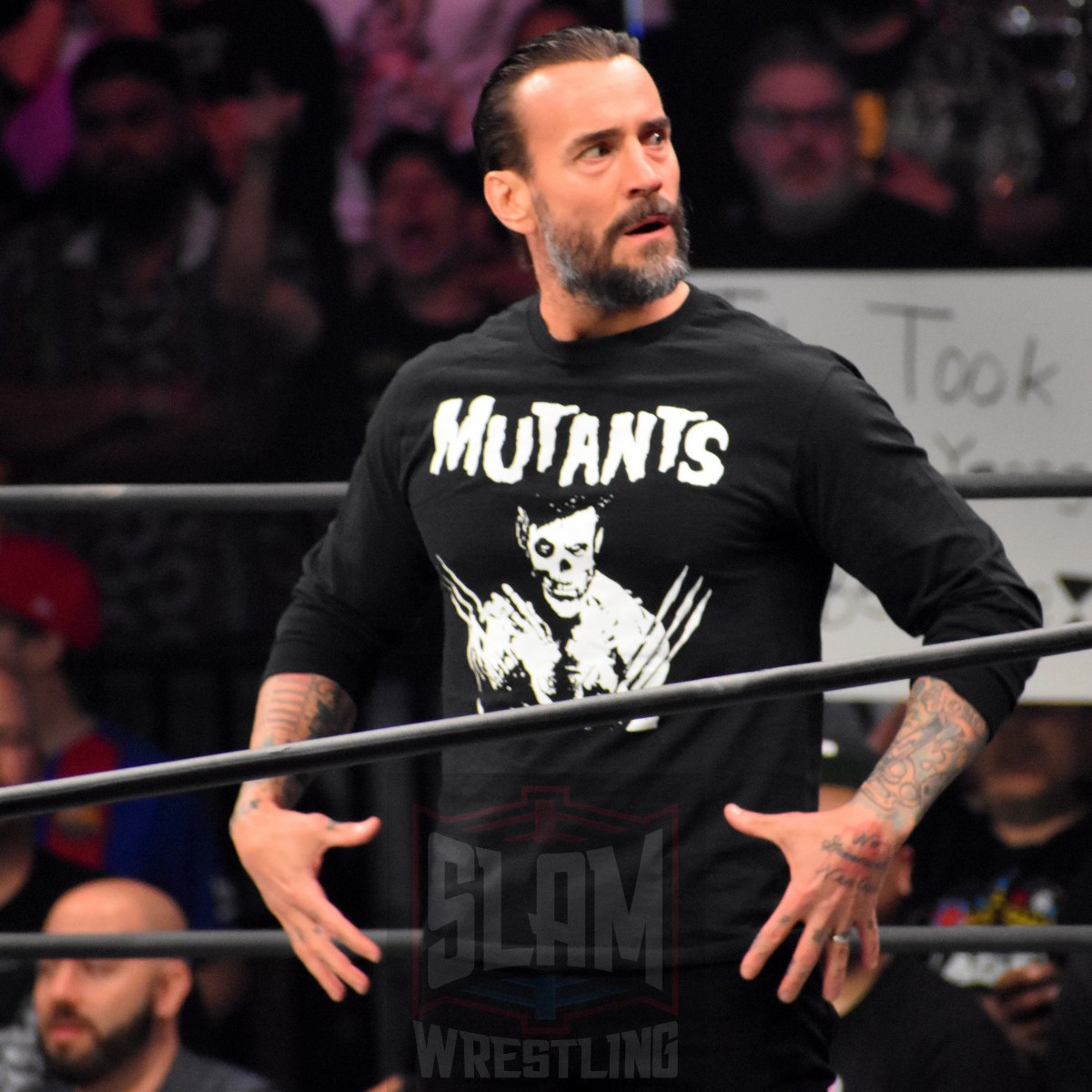 CM Punk wants the AEW World title at AEW Dynamite on Wednesday, May 25, 2022 at Michelob Ultra Arena at the Mandalay Bay casino in Las Vegas. Photo by Ben Lypka

Tony Schiavone welcomes CM Punk and AEW World Heavyweight Champion Hangman Adam Page. The two have finally come face to face. Punk is planning of walking out of Double or Nothing on Sunday as champion. Page is asked about his challengers confidence. Page is going to embarrass Punk, not on Sunday, but right now. On second thought, he can’t do it, because it’s not the right thing to do. Page doesn’t hate Punk; he almost pities him. He has no respect for Punk, though. Page isn’t just going to defend the title; he’s defend all of AEW from him.

Punk reminds Page that he paved the way. He gave Page the blueprint. Punk wants Page to shake his hand right now. He pushes the champ and Page responds with a heavy right. Punk just sits in the ring smiling.

William Regal has joined commentary as the JAS walk out. Jericho cuts the music has he also joins commentary.

Kingston jumps Isiah Kassiday on the ramp while Mox attacks Marq Quen in the ring. Kingston slams Quen in the ring and then takes him down with a double under hook suplex. Mox tags in to run a double team on Quen. Kassiday tags in and drop kicks Mox. The two double team Mox in the corner. 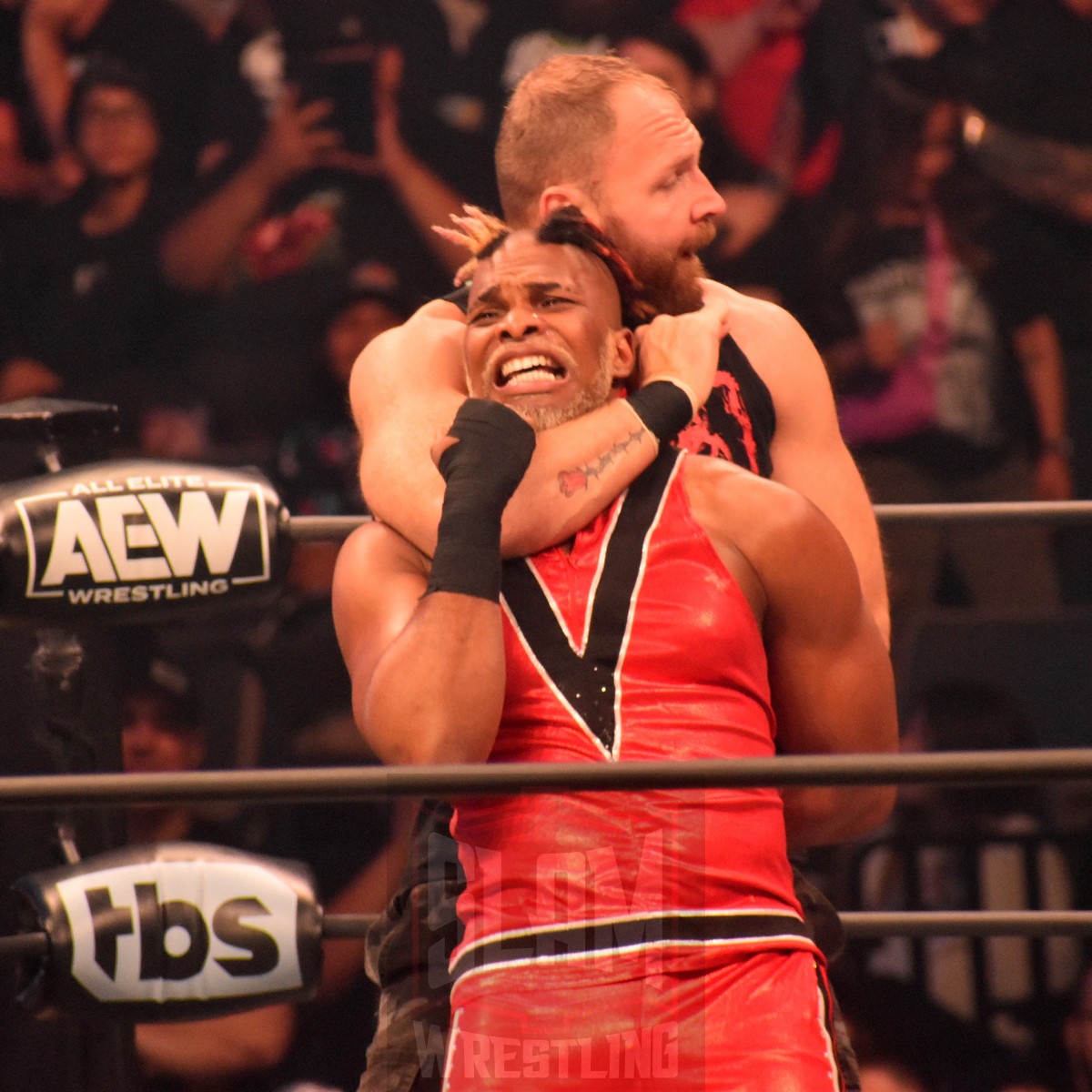 After the commercial break, Moxley has full control of Kassiday, until Isiah hits an enzuigiri. Quen gets the tag and comes flying in with a drop kick. Quen then flies over the top rope to take out Mox on the floor. Kassiday with a stunner off the top turnbuckle. Quen follows with a shooting star press. Mox kicks out. Kassiday gets caught on the Silly String. Mox with a lariat. Kingston holds Quen as Mox hits Kassiday with the Paradigm Shift. Mox covers and gets the three count.

After the bell, Jericho orders his crew to attack. Santana, Ortiz an Bryan Danielson run down to even the odds. AEW officials try to break the brawl up. Jericho kicks Danielson in the knee; immediately dropping him. Officials finally gain control, breaking up the fight.

The problem with having RoH matches on Dynamite is that you may not always know what is going on. FTR and Roppongi Vice are in the middle of a great match when they are interrupted by two guys I don’t know. It’s Jeff Cobb and Great O-Khan, The United Empire, attack. They toss Roppongi Vice out of the ring and then take out FTR. Dax Harwood is put through a table and so is Trent Barretta. 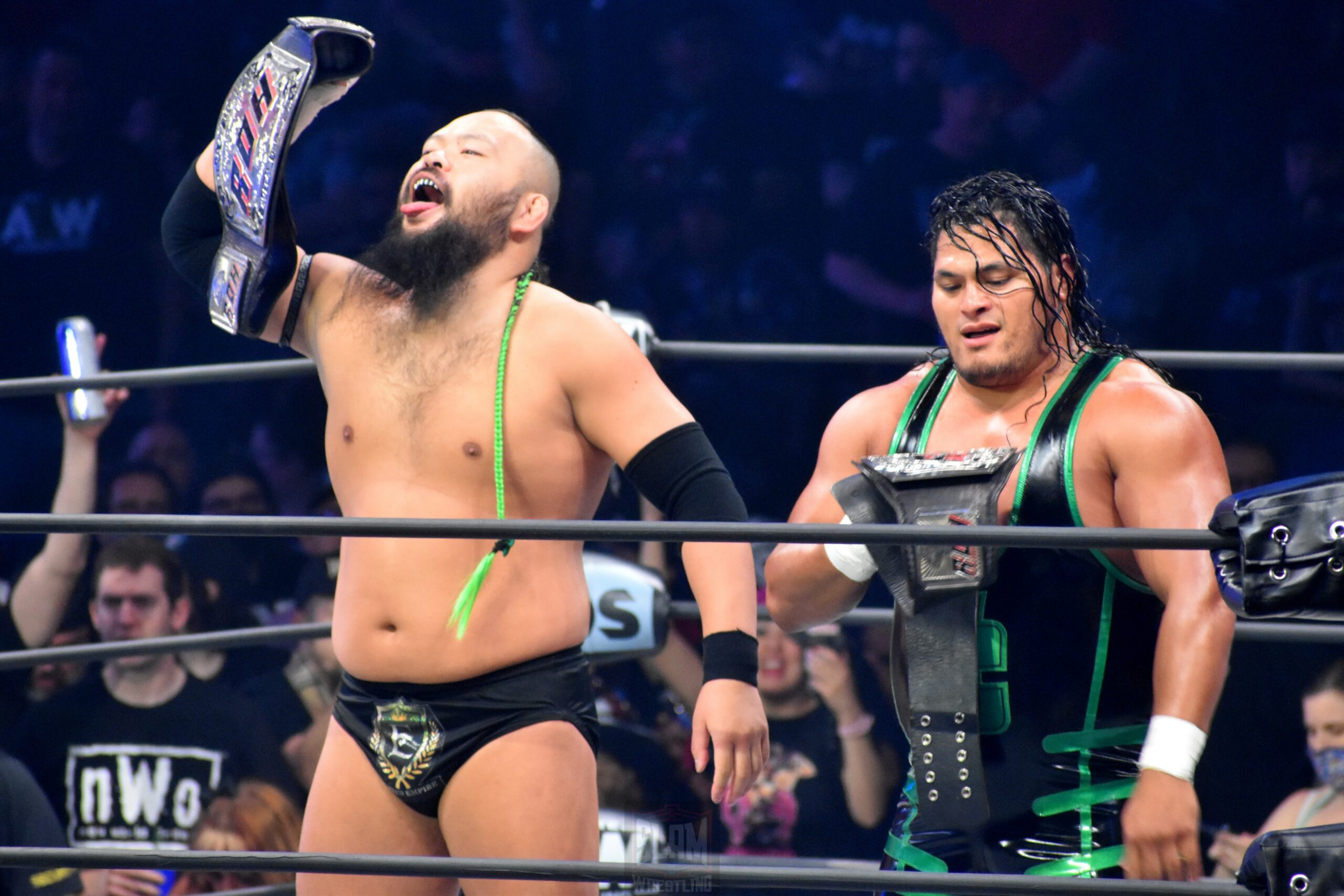 The Hardys talk of their upcoming match with the Young Bucks, calling the Bucks Hardy cosplayers. Jeff says they are in their over-prime. This final run will be their best and the Bucks are stepping stones to the AEW tag team titles. 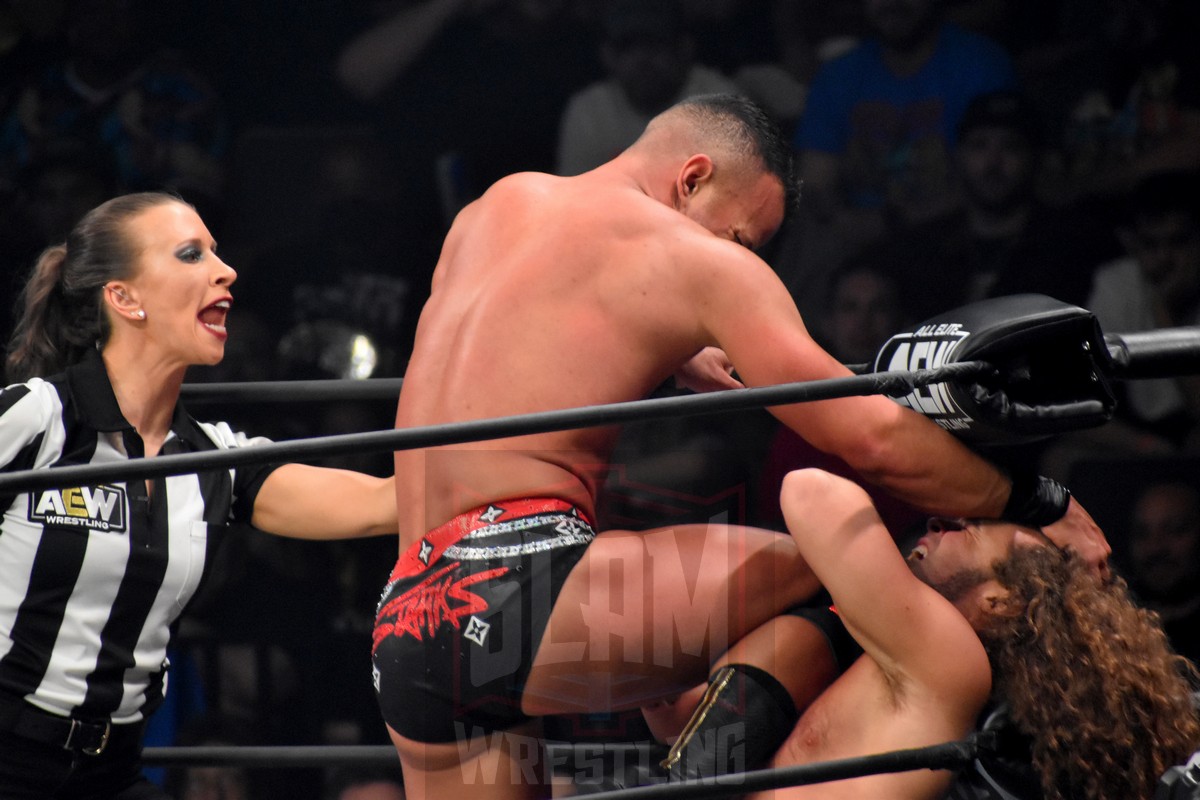 Ricky Starks goes after Jungle Boy at AEW Dynamite on Wednesday, May 25, 2022 at Michelob Ultra Arena at the Mandalay Bay casino in Las Vegas. Photo by Ben Lypka

Jungle Boy and Swerve shake hands, but Starks shoves Swerve into JB. Starks catches Swerve on a kick and whips his leg into Jungle Boy. Swerve tosses JB into a hurricanrana on Starks. Jungle Boy is taken out on the floor by a Starks clothesline. Swerve and Starks trade blows on the apron. Swerve with a kick to Starks and is hit with a hurricanrana to the floor by Jungle Boy. Swerve slams Jungle Boy into the corner and puts him up top. Starks joins them, only to get shoved to the floor. JB with a reverse-rana, but Swerve lands on his feet. Starks gets blindsided by a kicks from Swerve. JB is set up for vertical suplex by Strickland, who gets  speared by Starks. Ricky with a Michinoku driver, but JB kicks out at two. Starks with a thumb to the eye and hits Swerve with Rochambeau. JB locks in the Snare Trap on Starks. Ricky gets the ropes, but Jungle Boy drags him back into the middle of the ring. Swerve breaks the hold with a super kick. Strickland with the Swerve Stomp to Starks and he covers to get the win.

After the bell, Powerhouse Hobbs attacks Strickland. Luchasaurus and Keith Lee run down to join in on the fun. Luchasaurus knocks Hobbs out of the ring. Lee launches himself over the ropes to take out both big men.

Dan Lambert has ordered a new TNT title to replace the one that Sammy Guevara destroyed. It will be presented to Scorpio Sky on Rampage.

Tony Schiavone welcomes AEW Women’s Champion Thunder Rosa to the stage. She isn’t wearing on face paint. It’s the face of someone who has earned everything she has. On Sunday, she will don the war paint and beat some respect into Serena Deeb.

Red Velvet isn’t happy about her loss to Kris Statlander last week. Ruby Soho interrupts, as she will face Statlander. 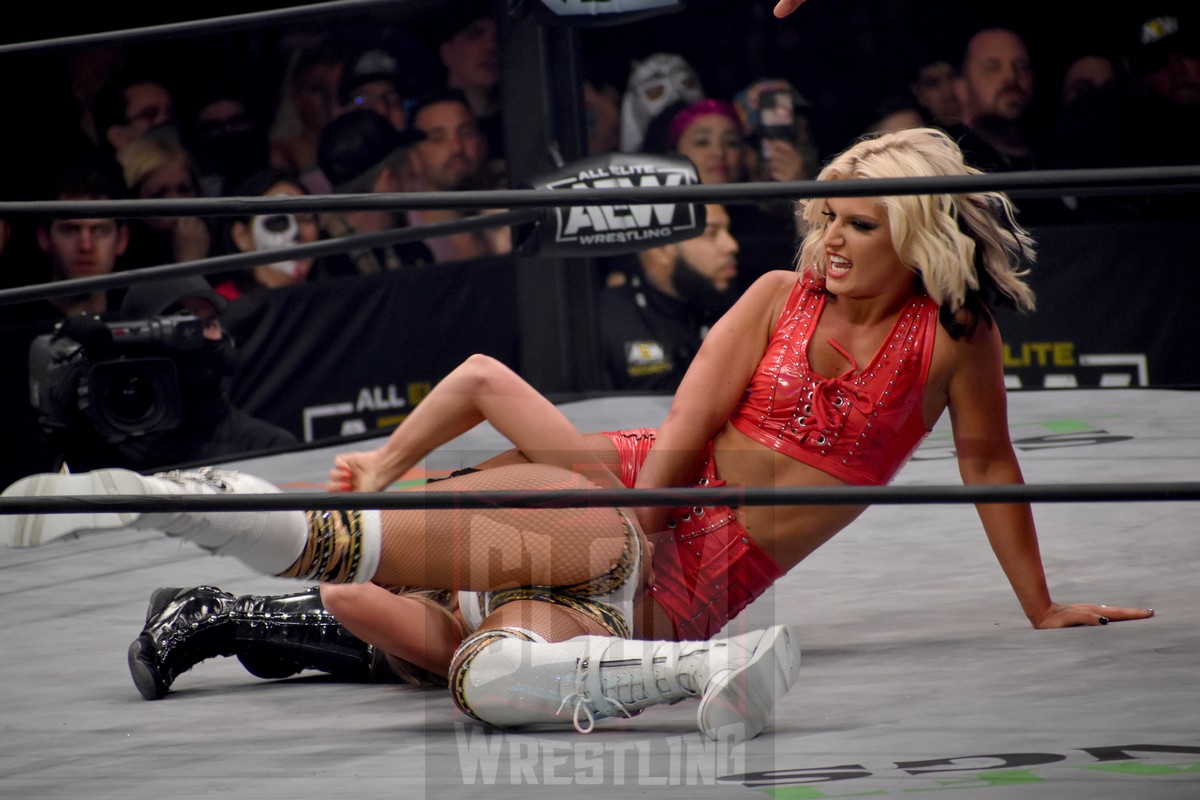 Toni Storm has Dr. Britt Baker down at AEW Dynamite on Wednesday, May 25, 2022 at Michelob Ultra Arena at the Mandalay Bay casino in Las Vegas. Photo by Ben Lypka

Baker tells Rebel and Jamie Hayter to head to the back for this match.  Toni and Britt keeps things on the mat, trading holds. Baker breaks a head scissors by getting to the ropes. Baker rolls to the floor, but Storm follows her. She slams Baker into the ring post. Baker blocks Storm’s attempt to smash her onto the apron. Baker with an eye rake and slams Storm into the ring steps. Back in  the ring, Baker connects with a thrust kick. Storm counters the Pittsburgh Sunrise with a swinging DDT. Toni follows with a hip attack. Baker counters the Storm Zero with an air raid crash. Jamie Hayter makes her way to the ring, and Baker tells her no. Storm almost gets the pin with a roll up. Baker hits a twisting neck breaker. Storm kicks out at two. Toni counters a lariat with a release German suplex. Storm knocks Hayter off the apron and then blocks a super kick. Toni looks for Storm Zero, but Baker counters but sitting down on Storm. She grabs the ropes for leverage and is able to get the three count.

Kyle and Joe trade strikes to start the match, with Joe gaining the upper hand. O’Reilly tries to take Joe down with a single leg, but Joe fights him off. KO blocks a sleeper hold, but Joe takes him down with a kick. Joe with kicks and chops and then an elbow drop. He follows up with a snap suplex. KO with a rising knee and then wrenches the arm to slam Joe to the mat. O’Reilly hammers Joe on the mat with strikes to the ribs and shoulder. Kyle with a dragon screw in the ropes. He goes up top, connecting with a knee strike to the back of the neck. O’Reilly with a cross arm breaker, but Joe is able to fight him off.

After the commercial break, KO with elbow strikes. Joe takes him down with a leg sweep. Joe with senton, but can’t get the three count. Joe wants the Muscle Buster, but O’Reilly is able to counter into a Fujiwara arm bar. Joe is able to get to the ropes to break the hold. The two trade blows once again. A knee strike stops KO in his tracks. O’Reilly with an O’Connor roll, but Joe counters into a rear naked choke. O’Reilly tries to counter, but can’t and he passes out. The ref calls for the bell. 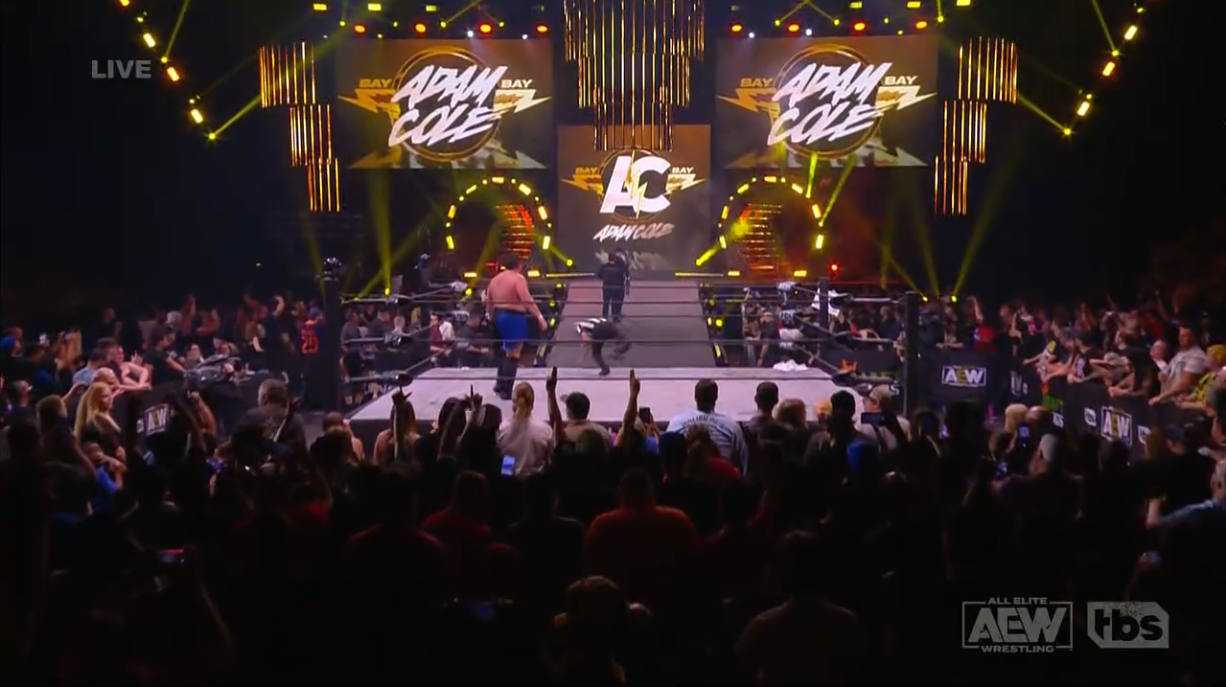 Joe advances to the finals to take on Adam Cole, who just happen to walk out on stage.

TOP PHOTO: Special referee MJF did not have things go his way in the cage match between Shawn Spears and Wardlow. Photo by Ben Lypka

Crowd in Vegas red-hot for Wardlow-MJF

The “Go Home” show for Double or Nothing was jam packed with action. Which is my only complaint. There was so much going on that somethings didn’t have time to breath. The cage match could have used more time, but overall AEW put on another great show.