Crowd in Vegas red-hot for Wardlow-MJF 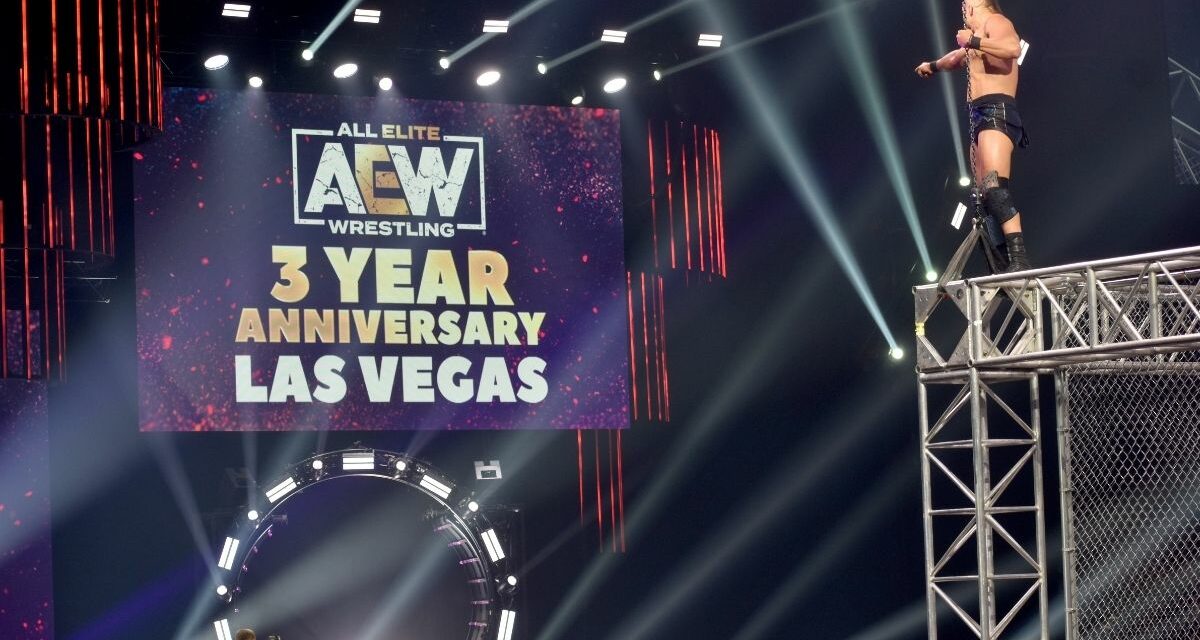 LAS VEGAS – On a night when All Elite Wrestling celebrated its third anniversary, the biggest news coming out of Wednesday’s Dynamite show was the promotion’s future plans for Double or Nothing and the west coast.

AEW president and CEO Tony Khan spoke to fans in attendance at the Michelob Ultra Arena at the Mandalay Bay casino both before and after the show and reflected on the organization’s growth, challenges during the pandemic and the future of Double or Nothing.

Khan said he wanted to bring Double or Nothing back to Las Vegas in 2020 and 2021, but COVID-19 made that impossible. He added he was thrilled to bring the show back to the fight capital and wants this to be an annual tradition “forever.”

The declaration is significant just because AEW has rarely traveled to the west coast, and are performing in California for the first time ever next week. Making Double or Nothing an annual event for western fans could see the show continue to grow.

In the ring, the show started red hot with Wardlow taking on Shawn Spears in a steel cage match. Maxwell Jacob Friedman was the guest referee and he predictably did not do Wardlow any favors. Friedman and Spears did not allow Wardlow to be removed from his handcuffs and the pair took the early advantage. Wardlow eventually broke himself free from the cuffs, but again Friedman would not count three. Spears then accidentally nailed Friedman with a chair, which led to Wardlow power bombing Spears repeatedly and referee Bryce Remsburg counted three.

The crowd was red hot for Wardlow and MJF got tremendous heat throughout the night. Good visual to build to Double or Nothing with Wardlow staring down MJF from the cage.

CM Punk and Adam Page followed that match with an intense talking segment. Punk questioned why Page was taking the rivalry so personally and Page cut a scathing promo stating that he was going to be defending AEW from Punk on Sunday. The men then got into a shoving match and Page struck him.

The crowd was probably 60-40 pro-Punk, but Page did get a lot of cheers after his promo. Those changed after the shove. I feel this is the time to put the title on Punk as he feels like the biggest star. 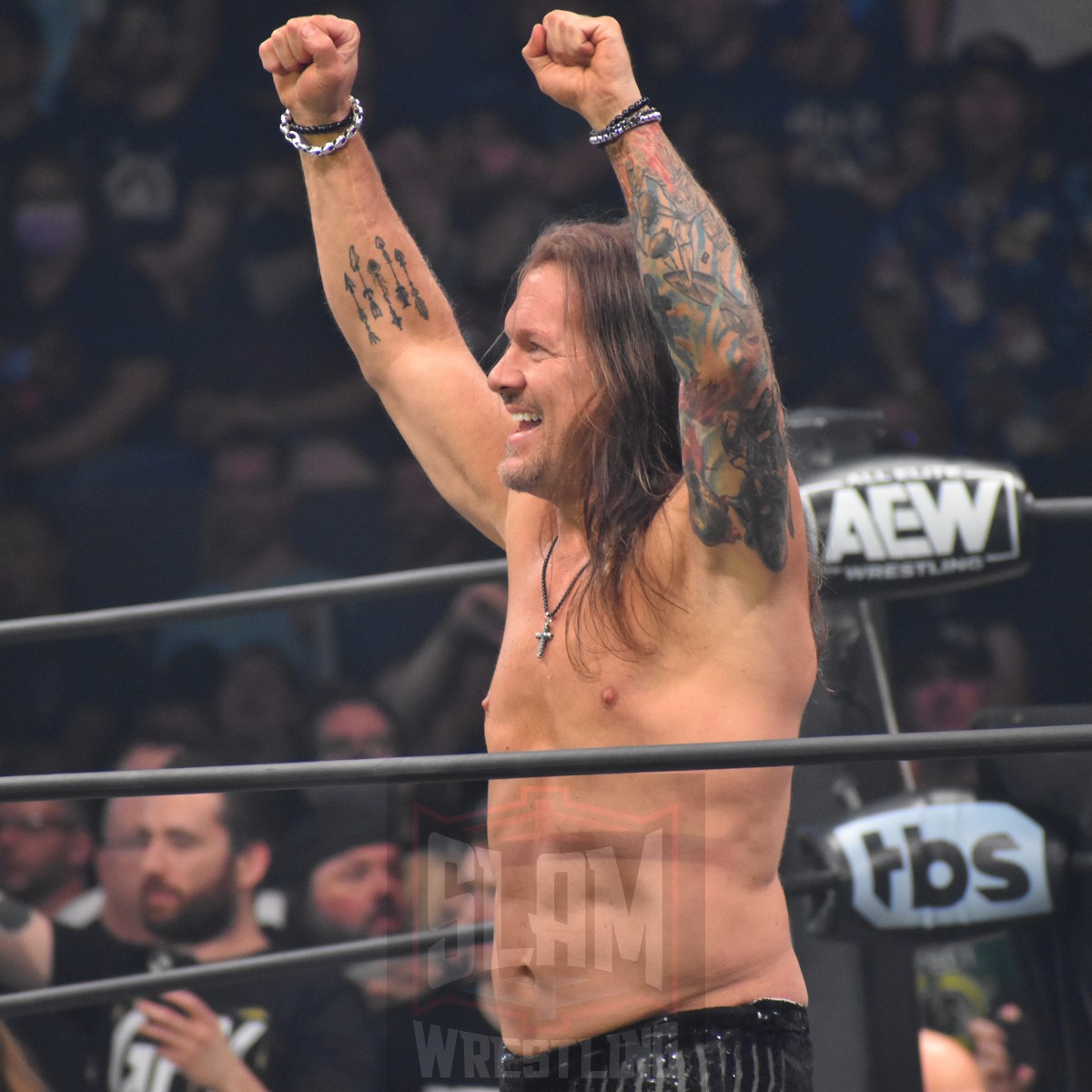 Chris Jericho at AEW Dynamite on Wednesday, May 25, 2022 at Michelob Ultra Arena at the Mandalay Bay casino in Las Vegas. Photo by Ben Lypka

Chris Jericho got heat for ending “Judas” early, but the crowd got really ramped up for Eddie Kingston and Jon Moxley. Good match with Private Party selling well and getting some shine near the end. Both Moxley and Kingston are extremely over. Big brawl between all members of the five-on-five match to close the segment.

FTR vs. Roppongi Vice featured the extremely rare no-contest finish from AEW. The match was solid, but was stopped by Jeff Cobb and Great-O-Khan who beat down both teams. Khan and Trent Beretta seemed to botch a table spot and much of the crowd didn’t seem to know Cobb and Khan. It was cool to see Cobb, but this felt like a build for the Forbidden Door show in June. 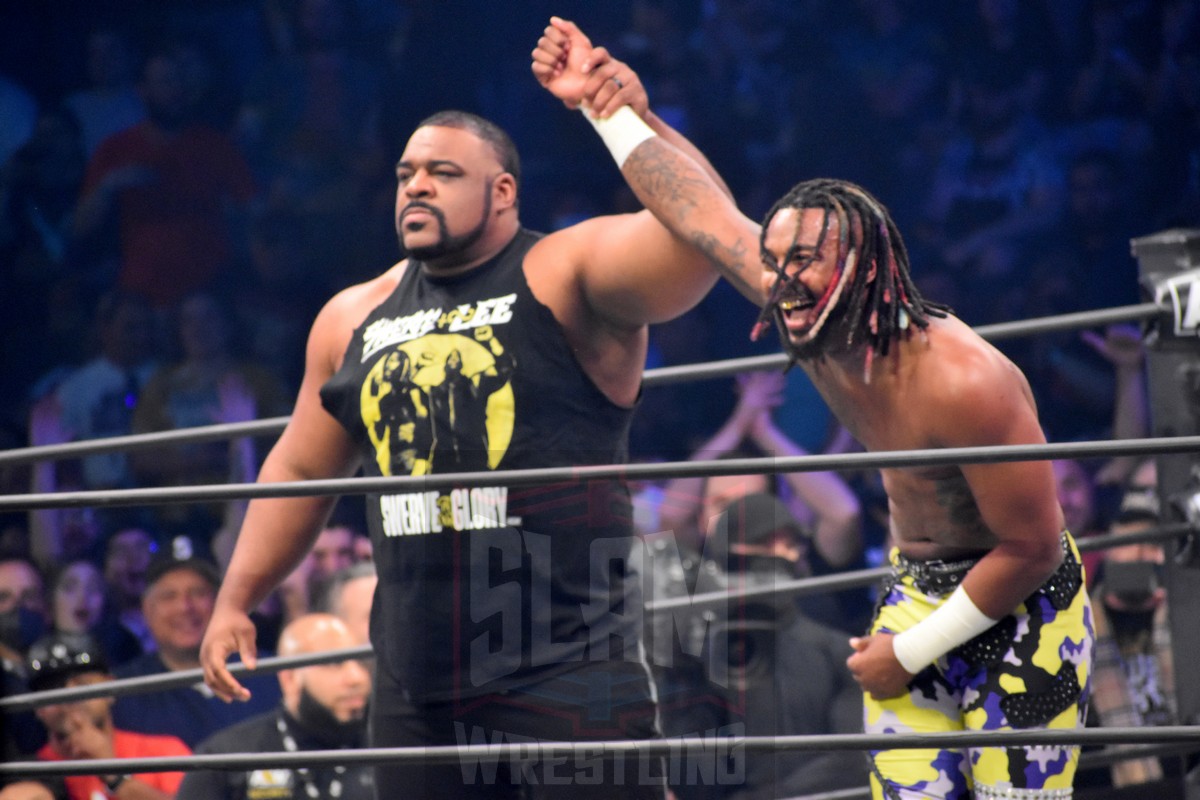 Keith Lee and Swerve Strickland at AEW Dynamite on Wednesday, May 25, 2022 at Michelob Ultra Arena at the Mandalay Bay casino in Las Vegas. Photo by Ben Lypka

The three-way match featured some incredible athleticism as Swerve Strickland, Jungle Boy and Ricky Starks gelled well together. All three guys had their moments, and it feels like Starks is due for a face push just because the crowd loves him. Strickland gets the win and it felt like he was due for a victory. The post-match sees all their tag partners hit the ring, and Keith Lee and Strickland stood tall. Lee is extremely over and is massive in person.

Tony Schiavone then spoke to Thunder Rosa. Decent talking segment, but it felt like something was missing. Rosa was very over in Vegas.

Britt Baker and Toni Storm saw a pretty mixed crowd response, and it felt like Baker may have been more over. Funny moment when Baker rips up a fans sign, followed up by the fan taking the two pieces and still holding it together. Jamie Hayter then helped Baker win, but it was hard to tell in the building what happened. This could have used more time, but what was there was good.

Samoa Joe was another guy who was super over. Great match with him and B.C.’s Kyle O’Reilly, as they made the most out of their time. The two went back and forth with stiff shots, and traded submissions before Joe caught O’Reilly in a rear naked choke and he passed out. Match of the night. Adam Cole came out to confront Samoa Joe on the ramp to a monstrous pop to close the show.

Matches of the night:

The AEW Dark tapings featured Konosuke Takeshita defeating Ryan Nemeth is a short, but fun match. Takeshita was impressively over for a guy who has only fought once on Dynamite. Mercedes Martinez beat Mazzerati in an Ring of Honor women’s title match to end Dark.

Stay tuned for a full report from Friday’s live edition of Rampage.

TOP PHOTO: Wardlow stares down MJF from the cage. Photo by Ben Lypka