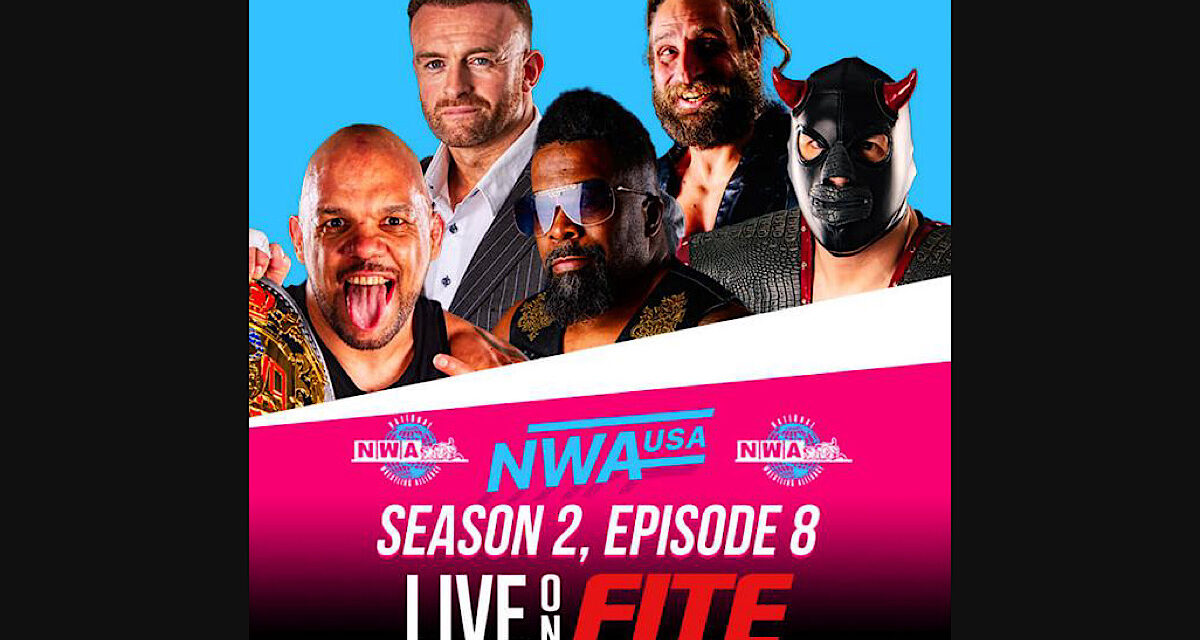 This NWA USA has in action this Saturday Gaagz the Gymp and Sinister Sal Rinauro will face each other in the squared circle in the main event.  Also, BLK Jeez takes his shot at the NWA Junior Heavyweight belt facing the fighting champion, Homicide.  Whoever booked the show did the matches in reverse, and we’ll have a lot to cover this Saturday.

The show starts with a cold open, and May Valentine is backstage with Sal.  She addresses their history and friendship, and she can’t help but notice he’s got “other friends.”  Sal responds to his time with the Sinister Minister and says, “the Master is funner” and now he sings a happy song.  Granted, The House of the Rising Sun is an inspired choice, made creepier by Sal singing it.  Shine on, you crazy cubic zirconia!

We got to the Skyway Studios in Nashville, TN for the final NWA USA before heading to Kentucky.  Joe Galli, Velvet Sky, and the NWA CEO William Patrick Corgan have the call.  There’s no time to lose as we go to the First Match of the night, and it’s for the… 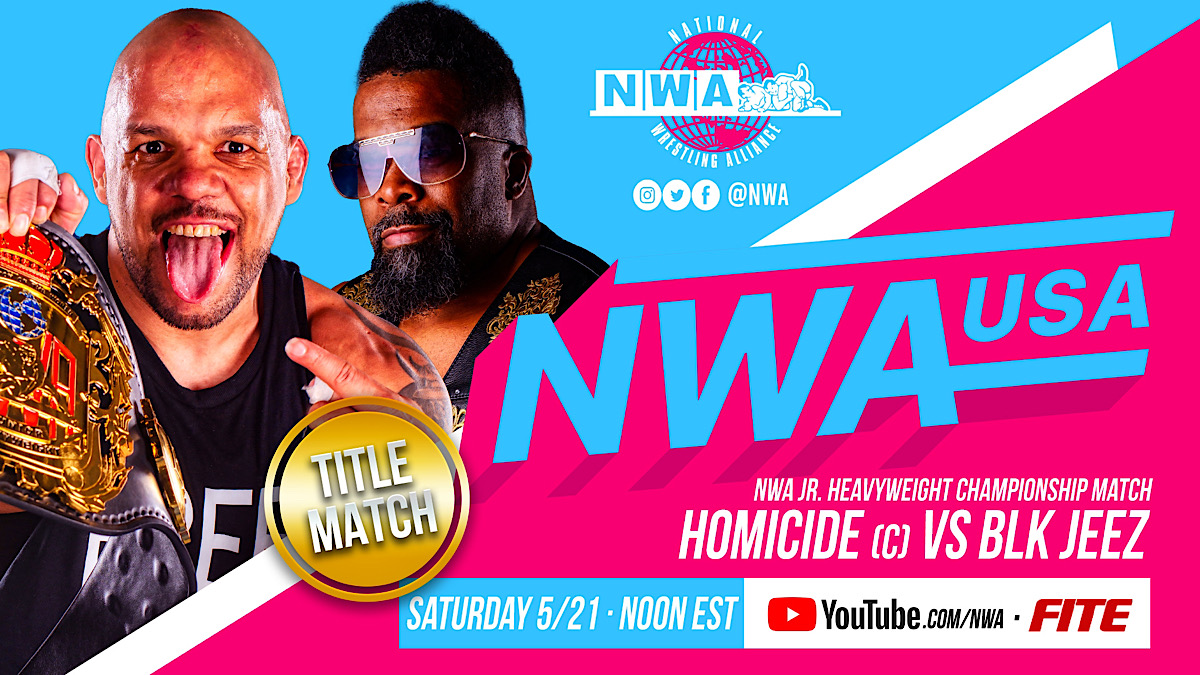 Jeez enters by himself, so no IdolMania at ringside.  The Crowd is hot for this, and Jeez is hungry for championship gold.  Once the bell rings, Jeez goes straight at the champ.  Homicide takes a break on the outside, and Jeez follows close behind.  The Notorious Legend gets the upstart in a sleeper to a powerbomb attempt, but Jeez turns to a back body drop.  He gets a belly-to-belly suplex on Homicide for a cover that only gets a two count.

Jeez just outwrestles the champ, and there’s speculation Homicide took the challenge too lightly.  He goes up top, and Homicide cuts him off at the pass.  He attempts to get in some offense, but Jeez pushes him off the top rope and then hits a missile dropkick to cover, but again gets a two count.  Jeez, ramps up the offense with a body slam to a double stomp that misses the mark, and Homicide gets Jeez with a double underhook suplex that gets the champ a two count.  A back body drop suplex gets another two count, and Homicide is having trouble putting away The Chruch’s Money.

Jeez keeps on attacking with a Northern Lights suplex with a bridge, but only gets another two count. Homicide channels Eddie Guerrero with the Three Amigos, then a Boston Crab in the middle.  Jeez quickly crawls to the bottom ropes to break the submission.  Homicide sets up for the Cop Killa finisher, but Jeez reverses to a flatliner to pin for the one, two…whoa, a close two count!  Jeez goes for an inside cradle with a handful of tights that gets another two count, but Homicide answers back with a Northeast Bomb, but he kicks out at the two count to his surprise.  Finally, he’s had enough and gets Jeez on the top rope and puts him away with an avalanche Koji cutter and…

Kyle Davis is with Nick Aldis at The Podium about he and Cardona facing each other at the ALwayz Ready pay-per-view.  Aldis addresses Davis and the fans and whether you love him or love to hate him, he stands as a husband, father, and someone that loves professional wrestling. He is proud of everyone that steps in the ring and wrestles their heart out for the NWA…except for Cardona.  Aldis states it’s time he took back “Sweet Charlotte” and when Cardona looks up at him from the mat, he says he’ll see the real NWA Heavyweight champion.

Now for some tag team action and it’s… 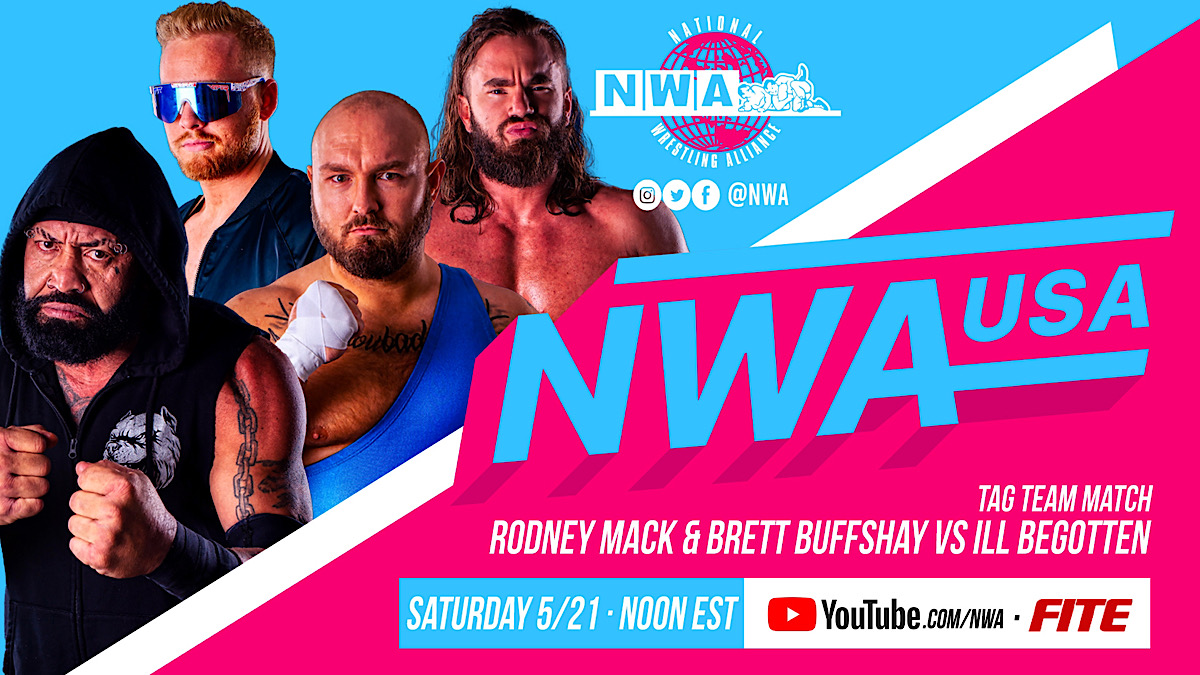 Brett Buffshay and Rodney Mack vs. The Ill-Begotten (Jeremiah Plunkett and Alex Taylor)

No Rush Freeman, so forget Freebird rules here. Galli notes that since Freeman is not a licensed manager, he is barred from ringside.  Again, you buy the bit, you buy the premise.  As for Buffshay, last time he got trounced by Trevor Murdoch, but Mack, according to Galli, saw the youngster work out the next day and asked him to be his partner.  It’s great Buffshay is getting more opportunities like this, which show there is talent in Utah (insert humblebrag moment).

Plunkett starts, but Taylor wants in against The Redd Dogg. He’s in the ring five seconds before Mack slaps the taste out of his mouth, before tagging Plunkett back in.  Mack tears down Plunkett, and he tags back in Taylor.  Mack brings in Buffshay, and he and Mack keep Taylor isolated in their corner.  Buffshay holds his own, especially with a running knee lift on Taylor, but it’s not long before the Ill-Begotten pull shenanigans, and Buffshay is a Rookie in Peri.  Buffshay tries a hope spot in a sleeper hold to the Tater Peeler from Tennessee, but Plunkett gets out with a back body drop.  He tries a senton but misses.  Buffshay rolls to his corner for the hot tag and Mack is a Redd Dogg en Fuego.  The end has Mack lock Taylor in the Euthanizer submission, and he’s out like a light.

Your Winner via Submission:  Brett Buffshay and Rodney Mack

And now for your Main Event and trust me…things are going to get weird.  Like beyond Dirty Sexy Boys weird, because it’s… 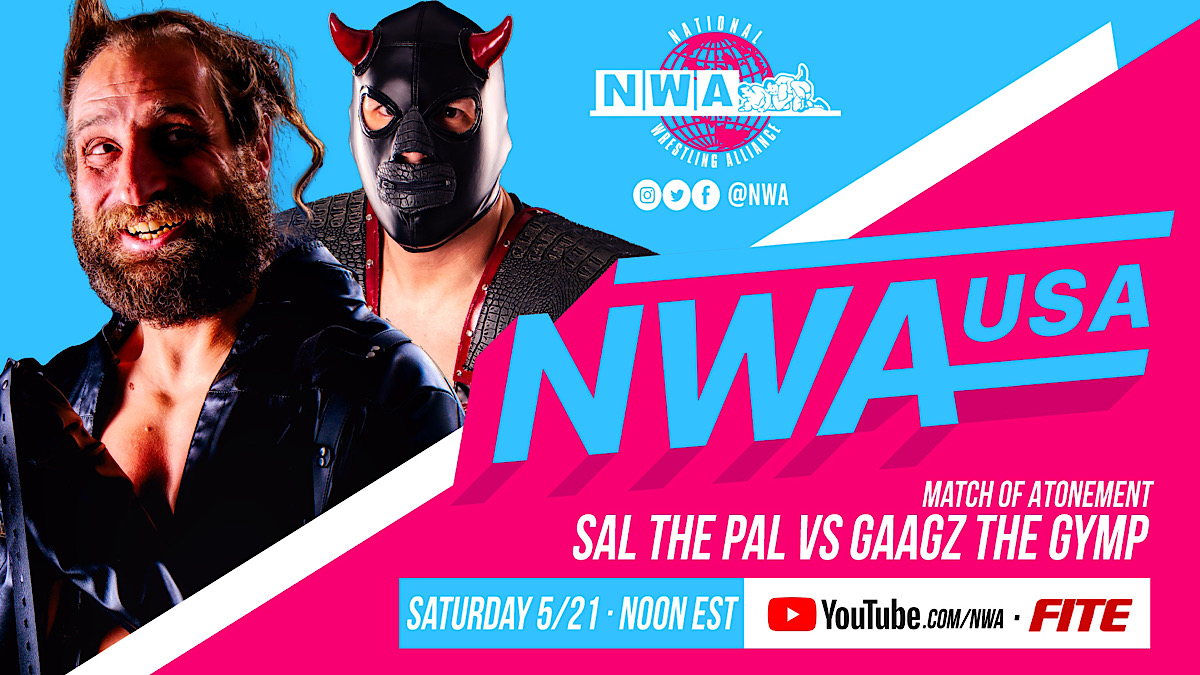 Both the Miserably Faithful partners come out together.  Galli says this match was done at the behest of The Sinister Minister and he demanded this as punishment.  Again, buy the bit and buy the premise, folks.

Gaagz starts to unzip his mask, and Sal zips it back up.  He then mounts the Gymp and unloads with punches.  But the Gymp is back up, and Sal goes back on the attack.  He stomps away at his Miserably Faithful teammate and the Gymp is enjoying this, and the fans are chanting in support of the Gymp.  What can I say?  The crowd is weird, and it’s in Tennessee, but I repeat myself.

Gymp retaliates with palm strikes and pulls at the little hair on Sal’s head before going to pull his beard.  Sal nails with a springboard Sal stunner, but The Gymp is unfazed.  He unzips the mask to reveal the tongue and the Gymp gets Sal in a sitting dragon sleeper and he’s out.

The Gymp starts to…err, gimp off to the backstage as the show goes to credits.

Again, whoever booked the show di the matches in reverse.  Homicide and Jeez should have gone on last, while Gymp/Sal should have been the opener.  If The Sinister Minister was booking this show, then I say, “Bravo, you evil genius.”

Overall it was a great show, and Buffshay teamed with the Redd Dogg might be a sleeper hit down the road.  I’d keep my eyes on that ion the future.

For Now, See ya next Saturday!