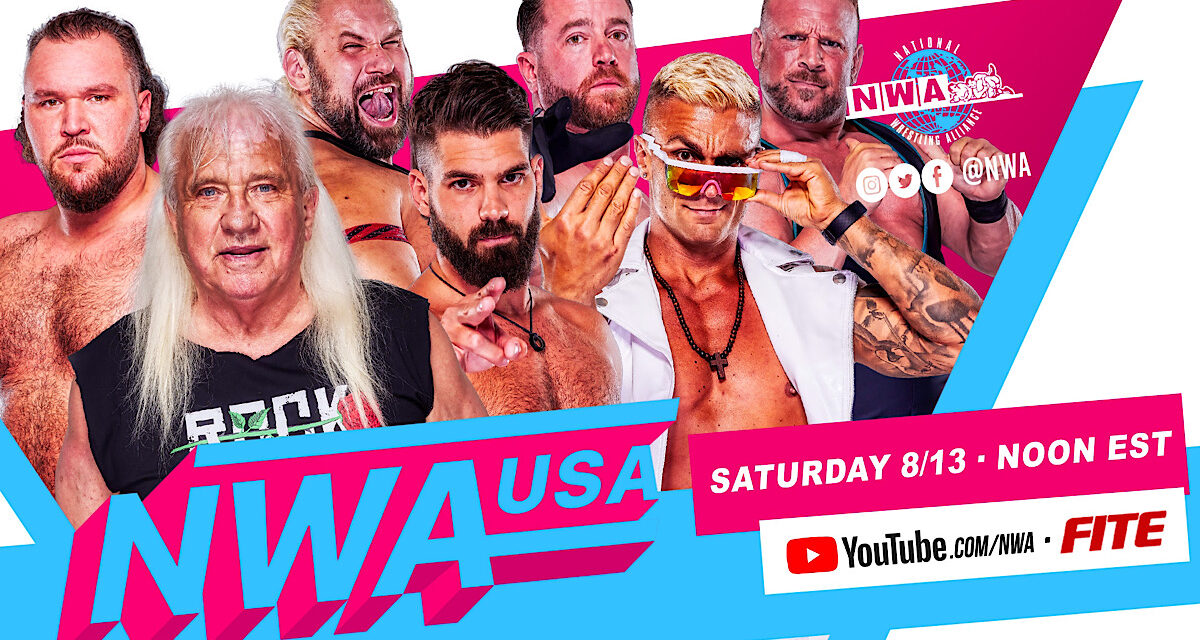 This NWA USA has two great matches, with The Country Gentleman going up against The Now, and VSK has The Rock n Roll legend Ricky Morton. Also, Aron Steven and May Valentine will be part of Jamie Stanley’s segment that needs to be quoted warmly and accurately, and that is worth the price of admission alone. As we head to the Skyway Studios in Nashville, TN., where Joe Galli, Tim Storm, and Velvet Sky have the call, it’s time for the First Match of this Saturday… 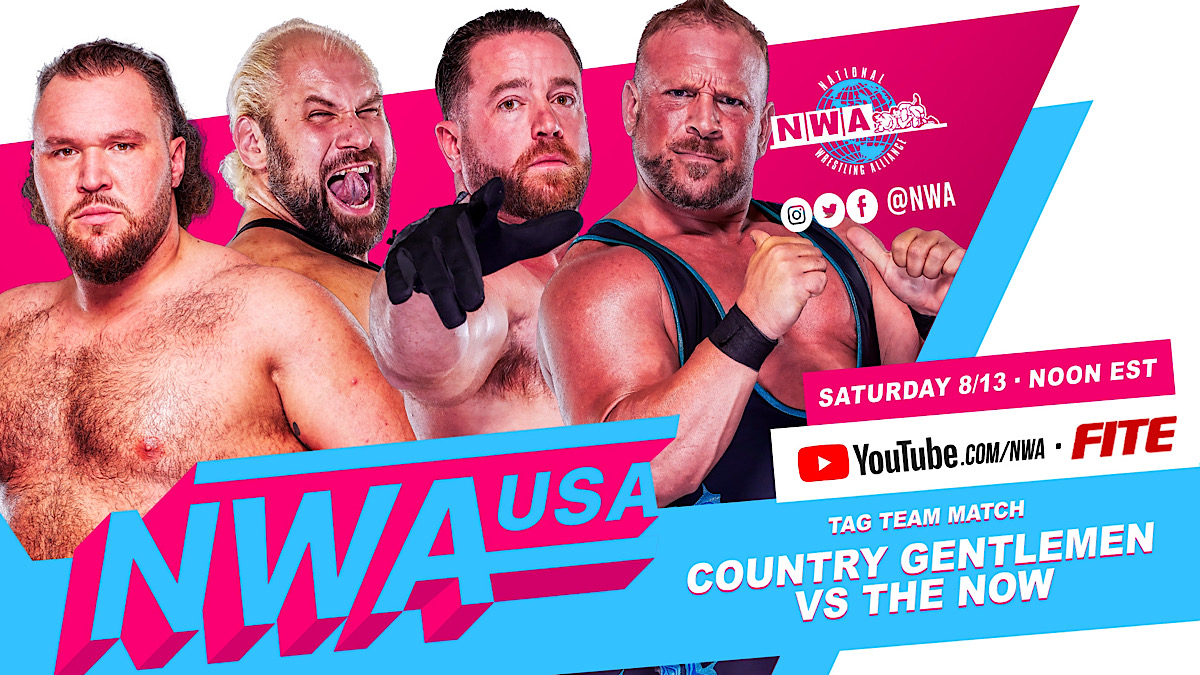 Cazana gets Dalishus in a wrist lock and yanks on his arm hard.  Now Andrews is tagged in, and then they double team with an atomic drop/shoulder tackle, followed by a double elbow drop to Dalishus’ sternum.  Andrews hits the ropes, but Collins kicks him in the back. Dalishus gets a stunned Andrews into position with his knees in his back and tags in Collins for the Welcome to The Now signature double team move. Collins covers for a two count.  Now Collins with a scoop slam and then an elbow drop to Andrews.  He covers again but still gets a two count.  Andrews is isolated in The Now’s corner, keeping him away from his Country Gentleman cousin.  Dalishus attempts a twisting senton but Andrews rolls out of the way.  He then nails a uranage to Dalishus and then begins to crawl to his corner.  Andrews gets the hot tag to Cazana, and he is a Gentleman en Fuego to The Now, even nailing Collins in a high spinebuster to cover for a two count.  As the match breaks down, Dalishus and Andrews are thrown to the outside. Finally, Cazana delivers a picture-perfect belly-to-belly suplex on Collins and he covers for the pin.

Joining at the Podium with Kyle Davis is Wrecking Ball Legursky. Legursky gives a medical update on Jay Bradley, who is still suffering from “elephant-phitis of the inner thigh”, and he’s getting help with Fixers Cream©. While he’s out, Legursky says he’ll beat up anyone in singles, tag, six-man, or Lucha Libre. Davis inquires of his services and Legursky channels his inner Dibiase and says, “everyone has a price.”  As they haggle, because Davis is sometimes a bit strapped for cash, Legursky haggles, and Davis talks about purchases that go by the wayside that could use help with, and Legursy replies, “That sounds a little illegal, Kyle!” Davis is a little flummoxed by the response until fans chant what we know: FIXERS RULE.

May Valentine is backstage with Kerry Morton and she asks about Colby Corino.  Kerry remembers when they would use to play as kids, but now they will face off as competitors in the NWA Junior Heavyweight division. He doesn’t like him but he respects him as a wrestler. As for his dad beating Legursky last week, he feels like now they can move on from The Fixers and focus on the future. 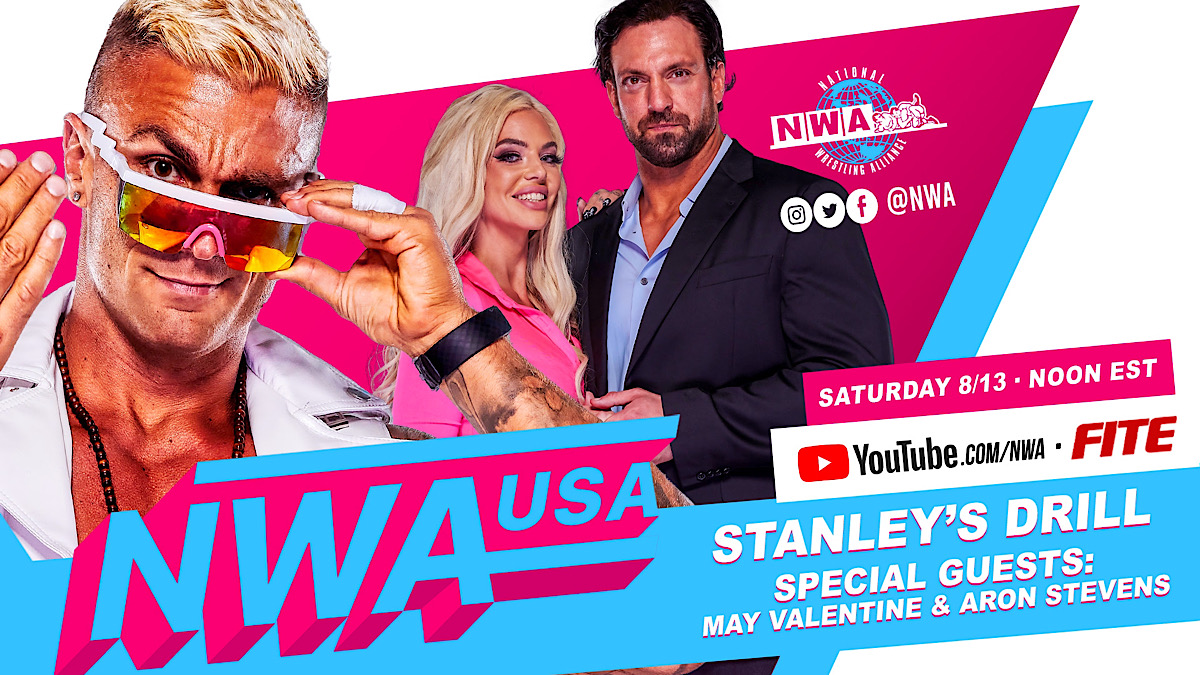 Jamie Stanley puts May Valentine & Aron Stevens to the verbal test on his Stanley’s Drill segment. This deserves to be written verbatim, so let’s take it away:

Stanley:  Here I am with Aron Stevens and the lovely May Valentine.  (to Valentine) You look fantastic today.

Stanley:  Question for you, May:  Does Aron, or does he not, think he’s better than me?

Valentine:  Well, Aron is better than you. That’s my answer.

Stevens: And May is correct.  That’s my answer.

Stanley:  May, another question for you: Can Aron please do us a favor and button his shirt up one more button?

Valentine:  Absolutely not. I think he looks incredible like that.

Stanley:  So Aron, out of the four adjectives to describe me being handsome, talented, charismatic, and humble, why would you choose all four?

Stevens:  Because you look like the illegitimate son of Billy Idol and Jimmy Buffett. It’s this shirt… 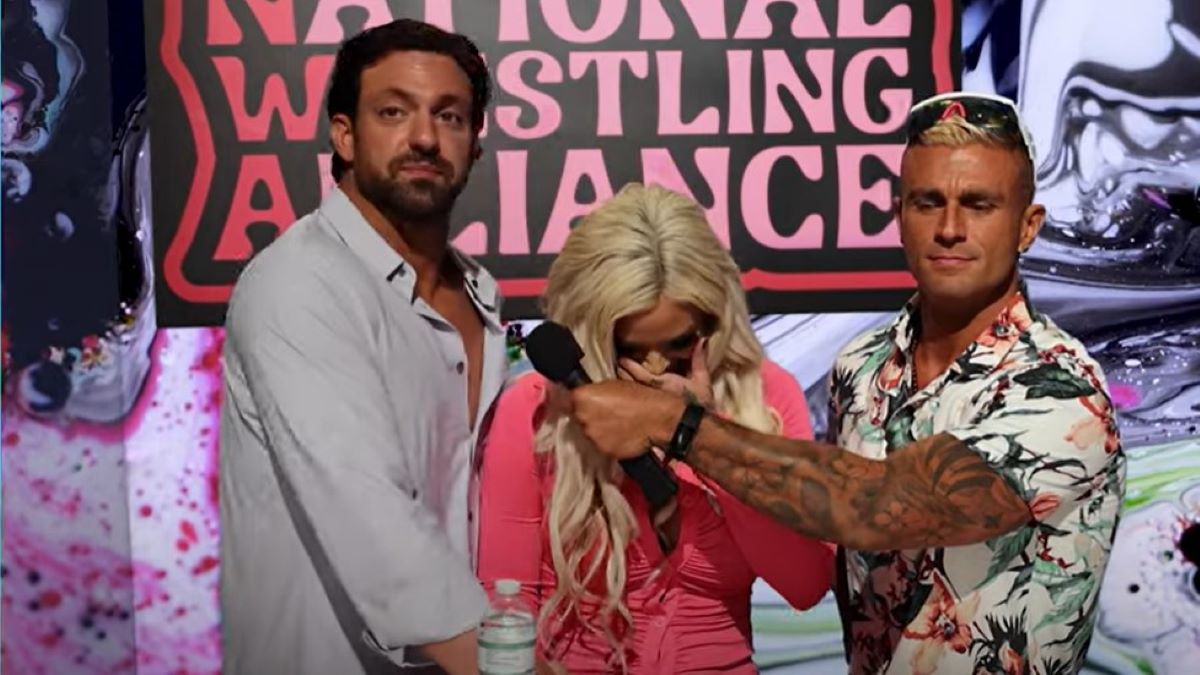 Stanley:  Okay, May.  How does it feel to be standing next to (not Aron); I’m talking about me: God’s gift to pro wrestling and women and humanity in general.

Valentine:  This man to my right, it feels incredible.

Stanley:  Aron, I’ve seen the way that you’ve looked at me in the locker room. It almost seems like you would like to be like me. You emulate me obviously you…you took a button off your shirt to try to copy America’s Jawline (patent pending). Why are you trying to be so much like me?

Stevens:  Have you not seen my whole resume? I do people better than themselves. That’s kind of just me, though.

Genius. Simply genius, and Valentine busting up at the Billy Idol crack was awesome, too.  I laughed at that as well

There is a recap of the Murdoch and Pope fight from NWA POWERRR but read it here if you missed out.

And now let’s go to the Main Event, and it’s… 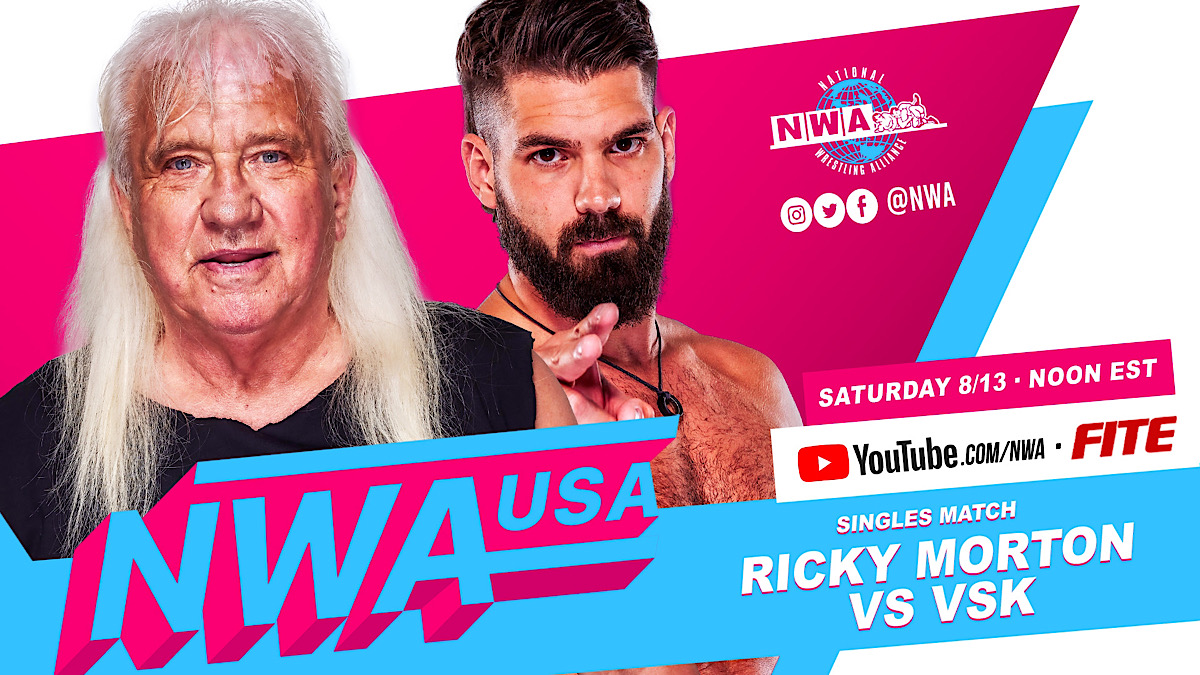 Both men lock up, and The Cardona member is showing disrespect to the legend.  Morton is fired up and tries to punch him, but the ref says not to use the right hand, so Morton gets him with the left.  Morton gets a wrist lock, but VSK yanks down hard on his mullet.  Now VSK is in control and he gets a body slam for a two count.  He chokes Morton as the fans chant, “Rock n Roll!” in support.  VSK lands with a springboard senton, and then he gets Morton’s head propped up on the middle rope.  VSK attempts for a leg drop but Morton moves away, and he ends up crotched on the middle rope. Morton delivers a Canadian destroyer and rolls him up for the one, two, and three.

Your Winner via Pinfall:  Ricky Morton

After the match, VSK beats down Morton, and Knox comes out with a table. Before Knox can chokeslam him, Kerry Morton comes out with a steel chair to run off The Cardona family.  Father and son stand triumphant, as the show goes to credits

Really just a solid show with both matches, but between Stanley’s Drill segment and Legursky’s rambling, they are what give this show the extra 1/2 star.  Seek this out if you need something fun to watch.

For now, we’ll see you next Saturday!