NWA: Murdoch has a bone to pick with Da Pope 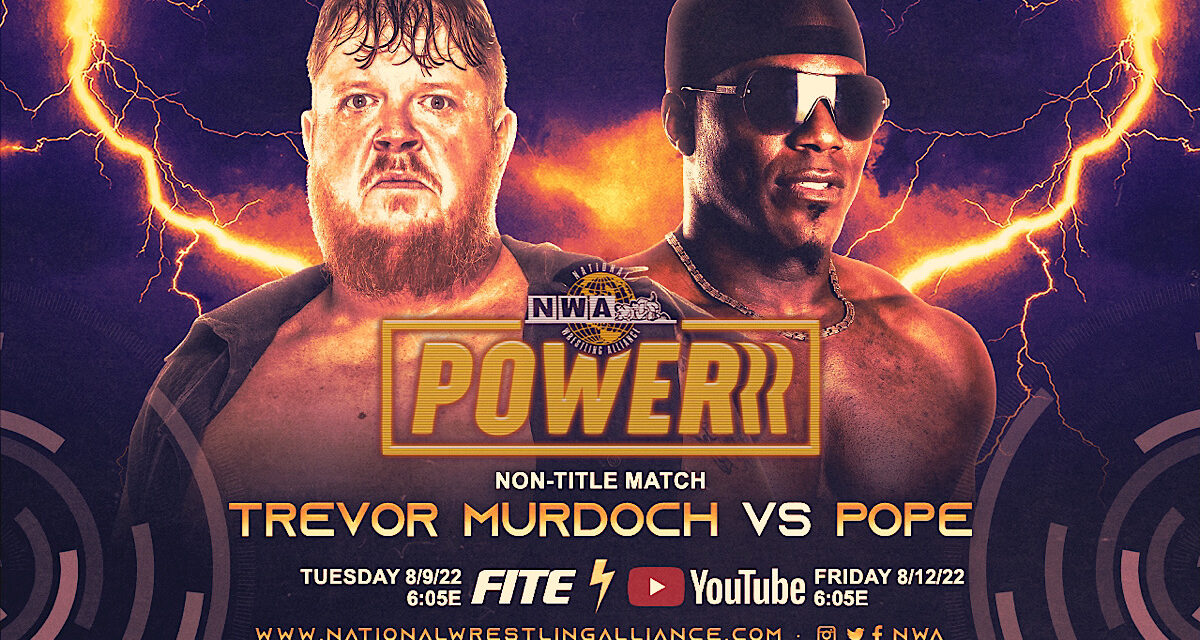 The NWA World’s Heavyweight Champion, Trevor Muchangingoing a change in his demeanor of late, and that has caught the notice of his friend, Da Pope.  Pope has tried to reach out but has been getting the cold shoulder.  Tonight is a match where both men get to air their grievances in the squared circle, but at what cost?

We’ll find out as we head to The Skyway Studios in Nashville, TN. Joe Galli, Tim Storm, and Velvet Sky have the call and we head right into the First Match of the night, and it is a… 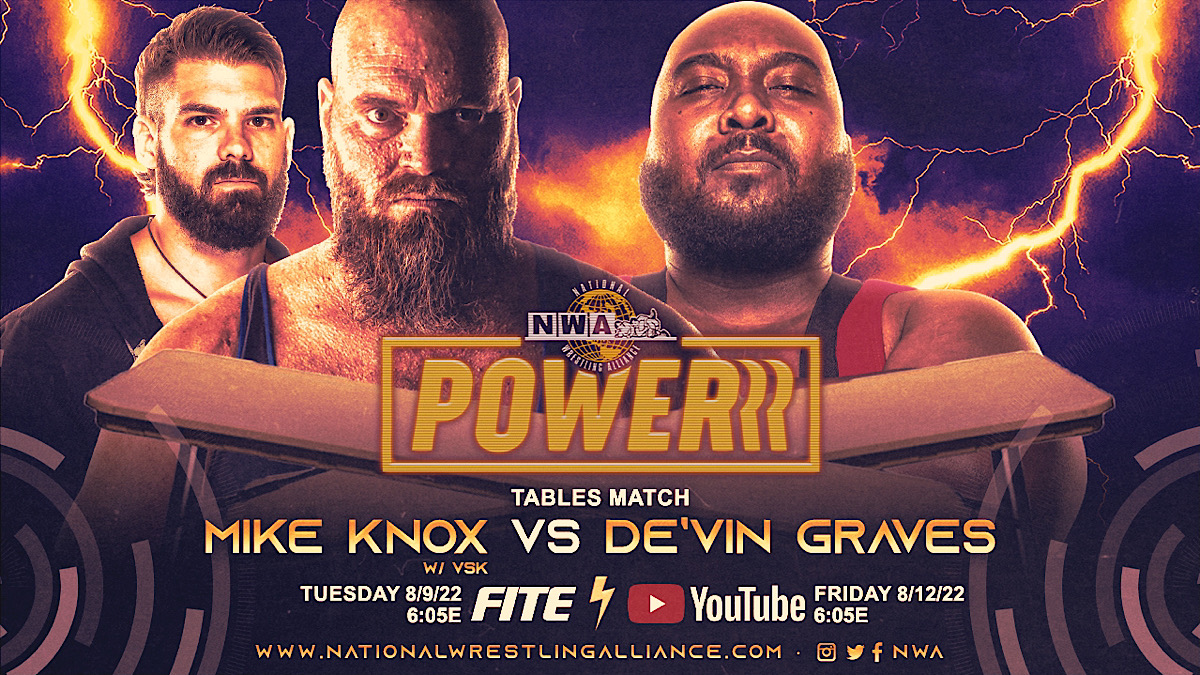 Knox has had a beef with Bully Ray since PowerrrTrip2, and there’s still heat between the former Aces & Eights stablemates.  All this match is designed to do is send a message to Bully Ray, and this is a one-sided match from the moment the bell rung.  Graves is rocked with a big boot by Knox, and both Cardona members taunt Graves mercilessly while delivering damage to his carcass.  Graves tried to fight back but Knox gets a running crossbody, followed by a running hip toss in the corner to rattle his skull.  Knox has VSK get the table to set up, and Knox screams, “Come on, Bully!” One chokeslam to the table and it’s finally over.

Your Winner via Pinfall:  Mike Knox

At The Podium with Kyle Davis is BLK Jeez and the oiled-up Jordan Clearwater. After counting the abs Clearwater has, Davis asks where Cyon is, and Jeez tells the “Nashville Neanderthals” that he is preparing for the NWA National Championship with Jax Dane at NWA 74. He lists Dane’s accolades as a champion but notes that he is a former champion.  Once it’s all said and done, Cyon will bring more gold to IdolMania.

So when I opened up The Book Of Jeez 📖 and came across the chapter known as #NWA74, it lead to another 💎 on the 🎤 from the mind of “The Church’s Money!! #Naamean @nwa @KyleDavisATL @FiteTV @ClearLikeWater1 @PlanetTyrus @AUSTINIDOLLIVE @MarsheRockett @NWA_MysteryMan pic.twitter.com/a9nHX3EQK2

May Valentine is backstage with Da Pope. She inquires about his chances tonight against Murdoch, and he replies that “questions need to be asked that we have the answer to.” They’re brothers but they hit bumpy spots.  No matter what happens, he assures Valentine that he will be the Pope of Pimptasticness.

Now it’s time for a grudge match with… 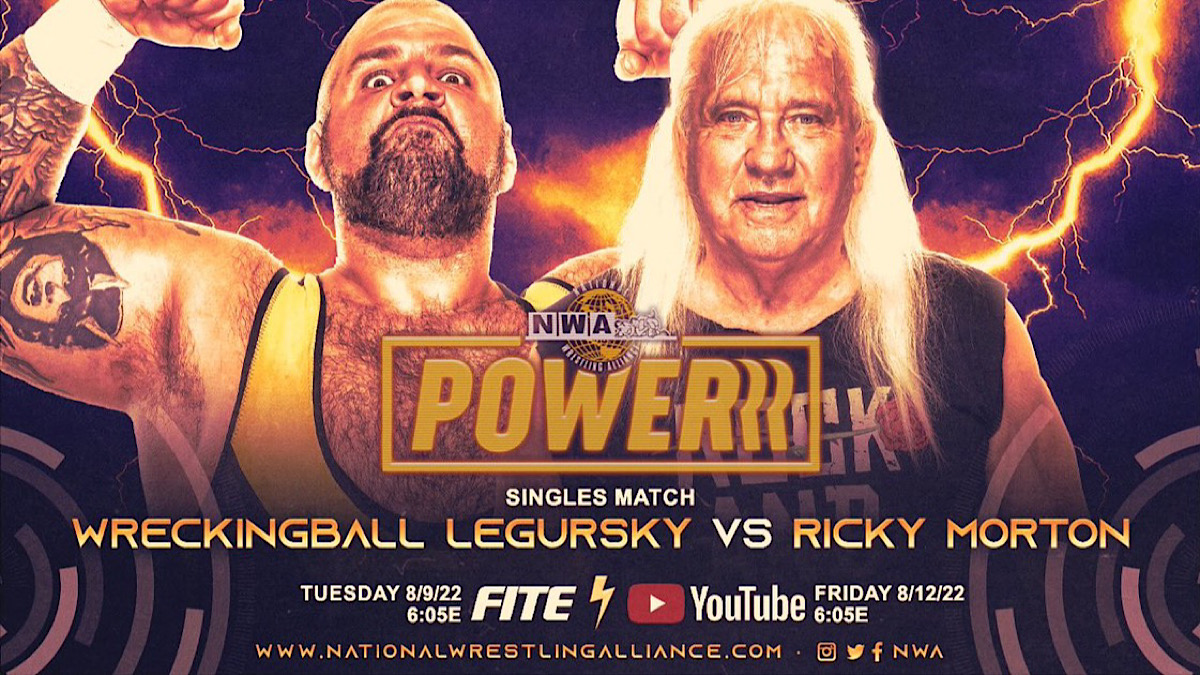 Morton is fired up in this rematch ever since Legursky beat him on NWA USA, and the wily veteran sticks and moves against the larger Legursky.  It looks good for the Rock N’ Roll Expresser, but a shot to the throat and Legursky is in full control of the match, adding injury to further insult Morton.  Legursky toys with Morton and then lands with a diving headbutt.  Legursky goes to undo the top turnbuckle pad to expose the metal.  He grabs Morton and pushes him into the corner to set him up, and Legursky rushes like a locomotive but Morton ducks at the last minute and Legursky hits the bolt instead.  Morton rolls up the stunned Legursky and covers for the pin.

Your Winner via Pinfall:  Ricky Morton

After the match, Morton hightails it out of the ring as both men are now tied at one apiece.  Of course, Legursky won’t stand for this, and it’ll be interesting what will be the final match down the road.

There’s a quick segment that shows Jamie Stanley interviewing Aron Stevens and May Valentine for NWA USA.  Since I didn’t see that this past Saturday, I can only assume this is a plug for next week.

There is a recap of the PJ Hawx and Homicide battle for the NWA Junior Heavyweight Championship but read it here if you missed it.

Galli announces that Storm left his broadcast position because Madusa asked him to the back on an important matter. We’ll find out more as the story develops, but now here’s… 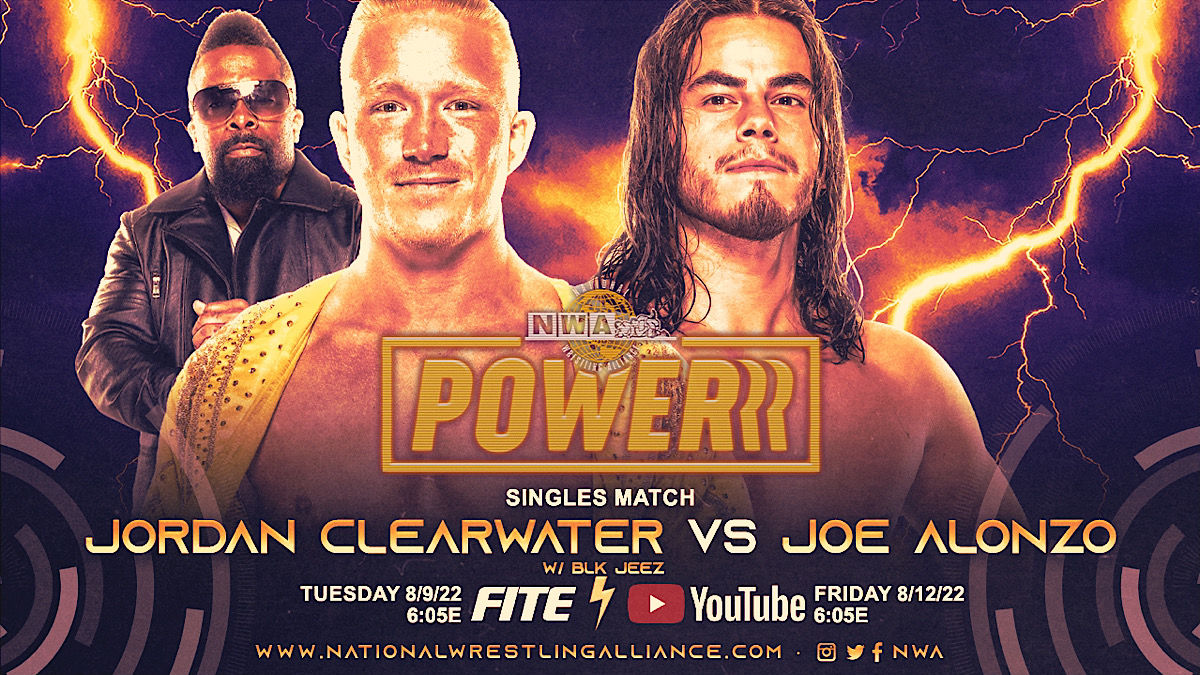 Alonzo is becoming a fan favorite here in the NWA, but he has yet to pick up a win.  Tonight might change that, but as soon as the bell rings Clearwater beats Alonzo senseless at the start.  Alonzo manages to counter with speed with a quick rollup and a standing dropkick each to cover for a count of two.  During the match, Galli and Sky note that Clearwater is an avid bird watcher (an ornithologist, if you will), and then I happened upon this tweet by Pollo De Mar that is worth sharing:

After @VelVelHoller told us @ClearLikeWater1 is an avid bird-watcher on this week’s @NWA #NWAPowerrr, it suddenly all makes sense. pic.twitter.com/C61rpNlvVA

Back to the match, Alonzo gets a rope-assisted enzugiri on Clearwater.  As the ref check on him, Alonzo attempts a springboard move, but Jeez yanks him down to the concrete floor and he does some dirty work before sending him back in the ring to the Golden Boy.  Clearwater nails with a scoop slam for a two count and then mounts to punches, followed by a leg drop for another two count.  Clearwater is now getting vicious in his attacks as he steps on his throat, then he gives Alonzo a suplex for another two count.  Fans rally with chants of, “Let’s Go, ‘Zo!”, but Clearwater keeps on the attack with a backdrop suplex but still can’t put the challenger away.  Clearwater attempts with a sleeper but Alonzo reverses to a belly-to-back suplex, and now the momentum shifts to his side.  Alonzo goes from a hip toss to an arm drag, but Clearwater rebounds back with a basement Superkick to cover for another two count.  He then goes to a sunset flip but Alonzo rotates and nails a basement superkick to cover for a two count. Alonzo goes for a springboard move that misses, but he manages to deliver a cutter for another two count.  Now Alonzo gets set up for a spinning neckbreaker, but Clearwater blocks by hanging on to the ropes. He delivers the Midas Touch and it’s all over.

Your Winner via Pinfall:  Jordan Clearwater

May Valentine is with Angelina Love and what her aspirations are in the NWA.  Love says she’s always had big aspirations. She is a multi-champion, and Velvet Sky has a championships opportunity from The Champion Series. That sounds like such a good idea, she’s gonna talk to the other half of the Beautiful People about that.

I wonder how that is gonna go over?

Kyle Davis at the Podium with the Pope on the eve of this fight and let’s hear from  the man himself:

“‘Textile’ Kyle; I think it all goes to the question of how is it that two men who call themselves friends can come out here and face off in the ring, but it’d be for the love of the game. I told everybody that Trevor and Pope were like two flat tires. What that means is simply this: sometimes the gets a little bumpy when the tires starts going flat. That’s the point we’re at right now. But let me be clear; Murdoch asked for this. Pope’s gonna give him this, and when it’s all said and done I’m gonna extend my hand yet again.”

Famous last words as we head to the Main Event, and it is…

There is tension in the match as the tie-up, and Murdoch is mean muggin’ Pope throughout.  They tie up again, and Murdoch stomps on the toes. Murdoch shoulder tackles Pope and he stares daggers at him in the corner, as Pope is trying to make sense of where his head is at.

Galli, Storm, and Sky speculate on this new attitude of Murdoch, as this whole thing started when he lost the title to Matt Cardona, and no one came to his aid.  Because of that, this meaner and, dare I say, dirtier Murdoch has taken a different path where he doesn’t lose the Ten Pounds of Gold ever again.

After a pause, Pope gets taken down again and Murdoch attempts an elbow drop that barely misses him.  He’s still trying to figure out Murdoch, but the champ calls for a test of strength. They lock up, but Pope breaks the hold and gets a side headlock.  Now both men go hold for hold, countering each move, but Pope nails Murdoch with a dropkick to an atomic drop and then follows up with a flying shoulder tackle that makes Murdoch take a breather to the outside.  Pope opens the ropes to invite him back in. Murdoch slowly enters the ring, and then cheap shots him to take advantage of the situation.  He gets in a clothesline and then lands a spinebuster to Pope and covers for a two count.  Murdoch gets an elbow to his face and then puts Pope in an abdominal stretch.  Murdoch goes up the top turnbuckle to attempt an elbow drop, but Pope moves at the last minute.  Pope is pimpin’ with a running elbow, but then Murdoch dumps him from the ring to the concrete floor on the outside.  Murdoch shoves Pope into the ring post.  He rushes at him and then he runs into the same post as Pope evades.  They brawl on the outside, but Murdoch gets the better of Pope.  He sets up for a piledriver on the concrete floor,  but Pope collapses in a heap.  Now Murdoch just coldly stares at the lifeless Pope.  Meanwhile, the ref counts out both men, and that means…

Commentary is left dumbfounded by what they witnessed, and Murdoch shows no emotion on his face.  He simply walks back behind the curtain of the Studios, as the show goes to credits.

I’m not big on main events going to a double DQ, but this is the exception as it told a story of Murdoch becoming a darker version of his former self.  The only issue is that this persona is facing Tyrus come NWA 74.  I’ll address it more as we get closer to the PPV.

The rest of the card was good as Knox has a good tables match to send a message to Bully Ray.  Clearwater is really coming into his own, and you don’t want to sleep on Alonzo.  Given time, he can be an impact player in the future.

Until Then, see you in seven!