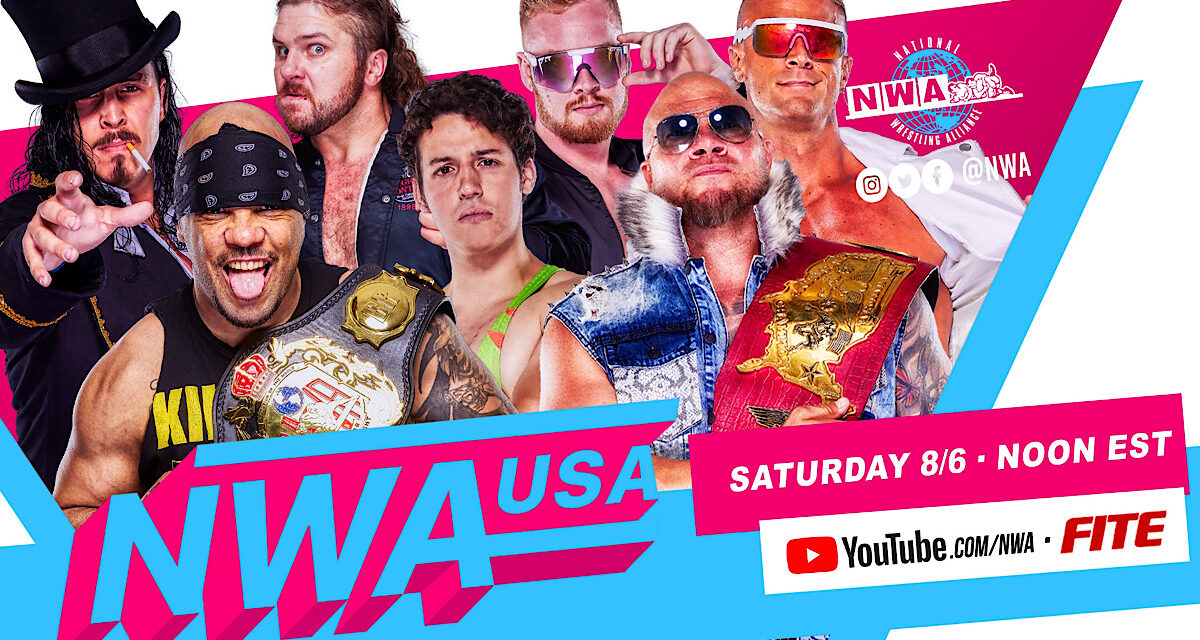 We are less than four weeks away from NWA 74, and everyone is looking to make an impression. This NWA USA is no exception, as the main event will have a rematch for the NWA Junior Heavyweight title between PJ Hawx and Homicide, and it looks to be a show stopper.  But before we get there, let’s head to the Skyway Studios. Joe Galli, Tim Storm, and Velvet Sky have the call, and we dive right into the First Match with… 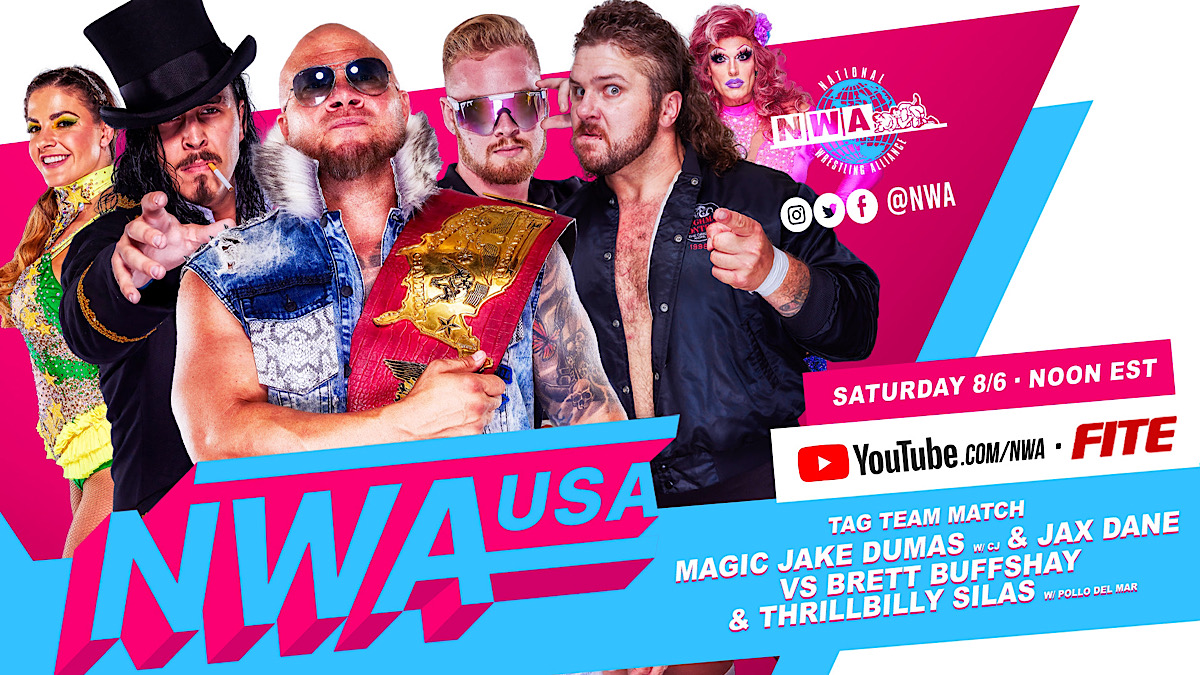 There’s one thing missing with this match:  Dane no-showed.  Therefore, we have a handicap match and Dumas will need to pull a major trick out of his hat.  Buffshay starts hot against the Magic one, and Silas goes hard in the paint once tagged in.  It looks like they both have good tag chemistry until Silas gets Buffshay in a Gorilla Press and throws him at Dumas, who quickly ducks.  After that, Buffshay is a Quad Daddy in Peril.  Dumas attempts the Abracadabra, but Buffshay gets out and tags Silas, who is now a Thillbilly En Fuego.  During the match, CJ models Dumas’ top hat to the delight of fans, and Del Mar gets hot because she believes she is looking at her man.  Then Silas and Del Mar go under the ring for…who knows what.  Meanwhile, Dumas and Buffshay fight on but while CJ keeps the ref preoccupied, Dumas finally gets the Abracadabra and…ta-da.

After the match, Dumas slices Buffshay’s eyes with a magic card, blinding home.  As Galli and company talk about why Buffshay came up short, Silas and Del Mar come out from under the ring in some various states of distress.  Everyone in commentary is left agog at what they just witnessed.

As for me, it’s like the philosopher Taylor Tomlinson once said:  Love is blind.  Lust is Helen Keller.

At The Podium with Kyle Davis is Jax Dane’s personal attorney, Chris Silvio, Esquire, and he is inquiring about Dane’s absence. Silvio objects and says his client fulfilled his contractual obligation, so ipso facto, he doesn’t need to be here. Mercurio shows up at the Podium, and Silvio exposes him as being here in the United States with a fraudulent visa (Mercurio: “I don’t use-a visa, I use-a Mastercard!” Ha!). Furthermore, Mercurio hates that Silvio can’t pronounce Italian, and worse…he’s “giving him-a the ugly face.”  I’d have to consult my lawyer friend on any briefs coverver the ugly face.

There is a recap of the Tyrus/Odinson fight on NWA POWERR, but read here to catch up.

Now for something different, here’s… 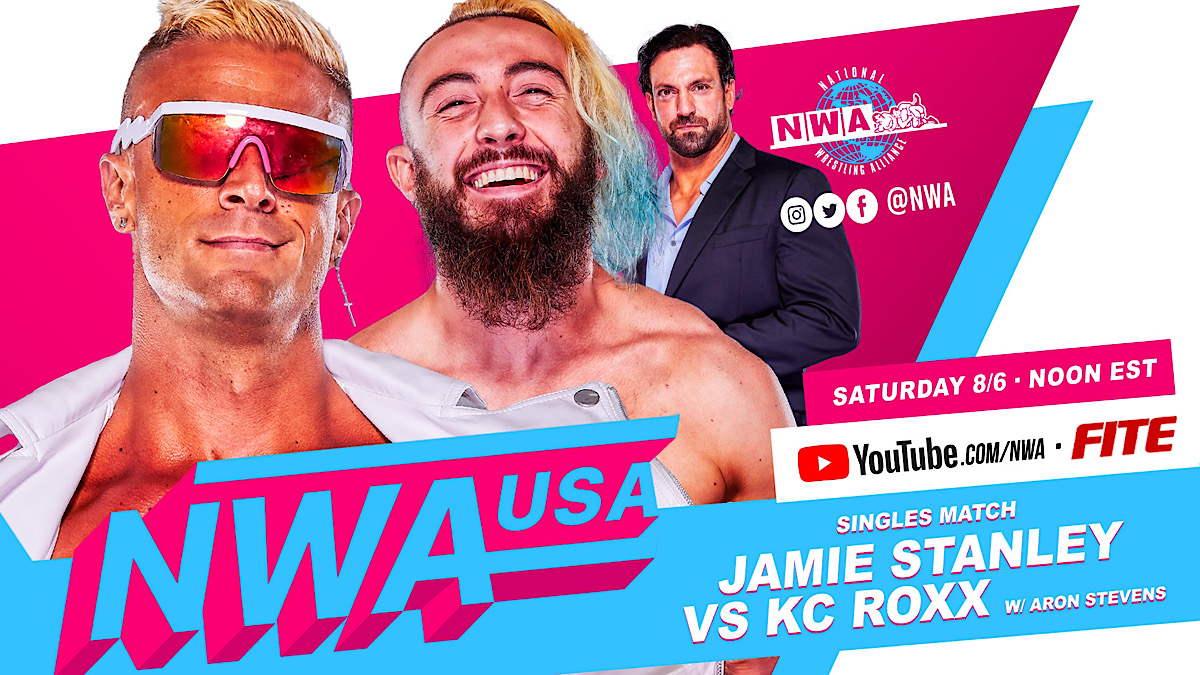 “That Dude” Jamie Stanley vs. “The Dojo Cat” KC Roxx (with Aron Stevens)

Roxx reminds me of what would happen if nZo were shrunk in the dryer, but…let’s see how this goes, especially if Stevens is in his corner mentoring him.  This is a completely one-sided affair, and Stevens is on the outside on the phone, barely into the match.  Stanley gets a powerslam on Roxx and covers for the one, two…nope. He ain’t done with the Dojo Cat.  Roxx starts to come back with a series of roll-ups to pin attempts, to no avail. Then Stanley gets hung up on the second rope. Roxx is raring to go, but the ref tells him to give space. When his back is turned, Stevens clocks him, and now The Dojo Cat gets the three count.

Your Winner via Pinfall:  KC Roxx

Roxx is celebrating like he won his first title defense, and Stevens is very happy with his protege.

May Valentine is with The Cardona Family of Mike Knox, Brian Myers, and VSK. Valentine mentions Knox will face Bully Ray at NWA74, and she asks what his chances are like.  All of the Cardonas are insulted by the question, but Knox menacingly says his chances look good since he’s no longer in control by Bully Ray, and he can’t wait to get his hands on him.

Now, Valentine is with Ricky Morton.  She asks the Rock N’ Roll Express legend why he’ll face Wrecking Ball Legursky on NWA POWERRR. Some think he’s senile or too old, but he wants to prove a point.  He then directs his comments to Legursky and tells him to come get some.

Now for the Main Event, and it’s a rematch for the… 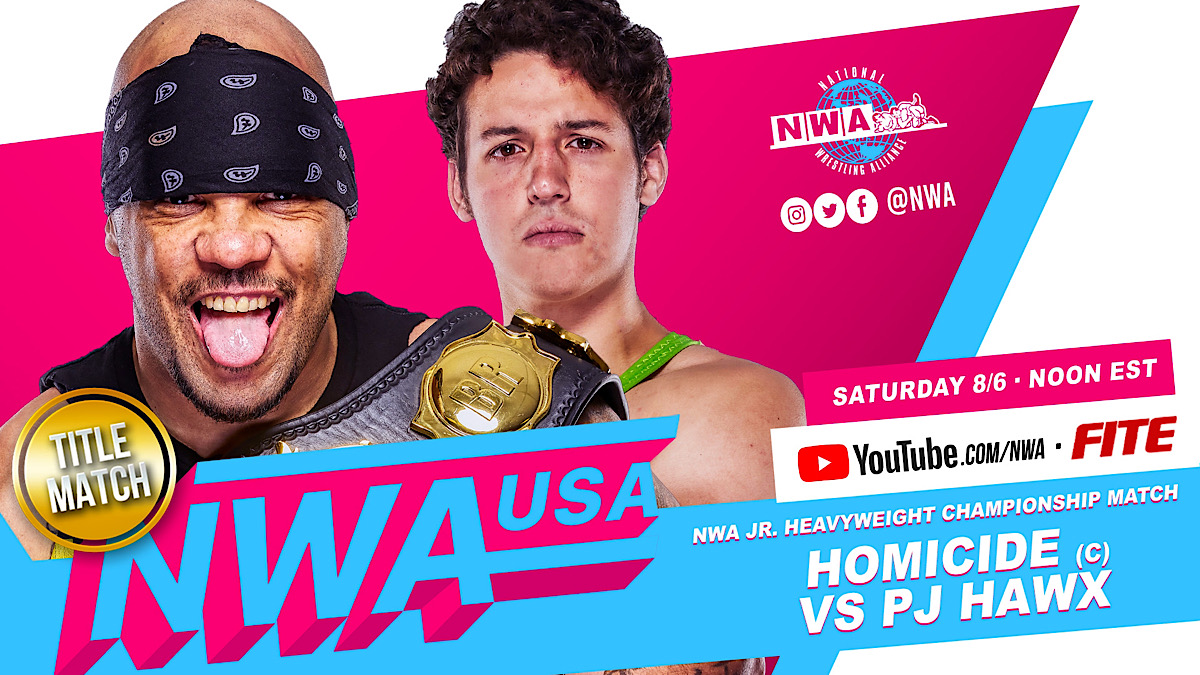 As the bell rings, we get a straight technical match.Homicide busts out some moves, but Hawx is no slouch on the mat.  Homicide gets Hawx in a leg scissors to his neck and then a butterfly suplex for a two count.  Homicide sends him to the corner, but Hawx counters with a belly-to-belly suplex for a one count, and he follows up by using the middle ropes to land with a slingshot neckbreaker on Homicide for a two count.  They go back and forth, but it’s The Notorious Legend who starts with the Three Amigos on Hawx, but he switches up at the third to go for a Boston Crab, but Hawx quickly gets out before it gets locked on.

Homicide sets Hawx up top, and then sends him crashing down to the mat to land hard on the right knee.  He then goes into a camel clutch and then transitions to a pin on Hawx, but he kicks out at two.  Hawx is sent to the ropes, but he manages to roll Homicide into the Hawx Clutch, and he wrenches back hard. Homicide writhes in pain and crawls his way to grab the bottom ropes to break the hold.  Hawx gets Homicide set up on the top rope.  As he climbs up top, Homicide reverses to a tornado DDT for a two count. He follows with a neckbreaker of his own on Hawx for another two count.  Hawx still has gas in the tank and throws an exploder suplex to cover Homicide for a two count.  He goes for a leg lariat that gets blocked, and Homicide goes for a Boston Crab and transitions to an STF. Now Hawx is in pain and blindly grabs the bottom rope to break the submission.  Homicide goes for the Cop Killa finisher, but Hawx has it scouted.  But the end comes when Homicide sets up Hawx on the top turnbuckle and delivers the avalanche Koji Cutter for the one, two, and three.

The Notorious Legend is still undefeated and he heads to NWA 74 holding the belt as he now prepares to face Kerry Morton in competition as the show goes to credits.

The start rating really belongs to Hawx and Homicide for putting on a great match.  Hawx is almost ready to be a champion in his own right…just not today.  Roxx and Stevens may be the mentor/student pairing we never knew we needed to have.  I’ve already said my piece on Silas and Del Mar.  As for Dumas…Again, he’s still better than Criss Angel.

See you next Saturday!