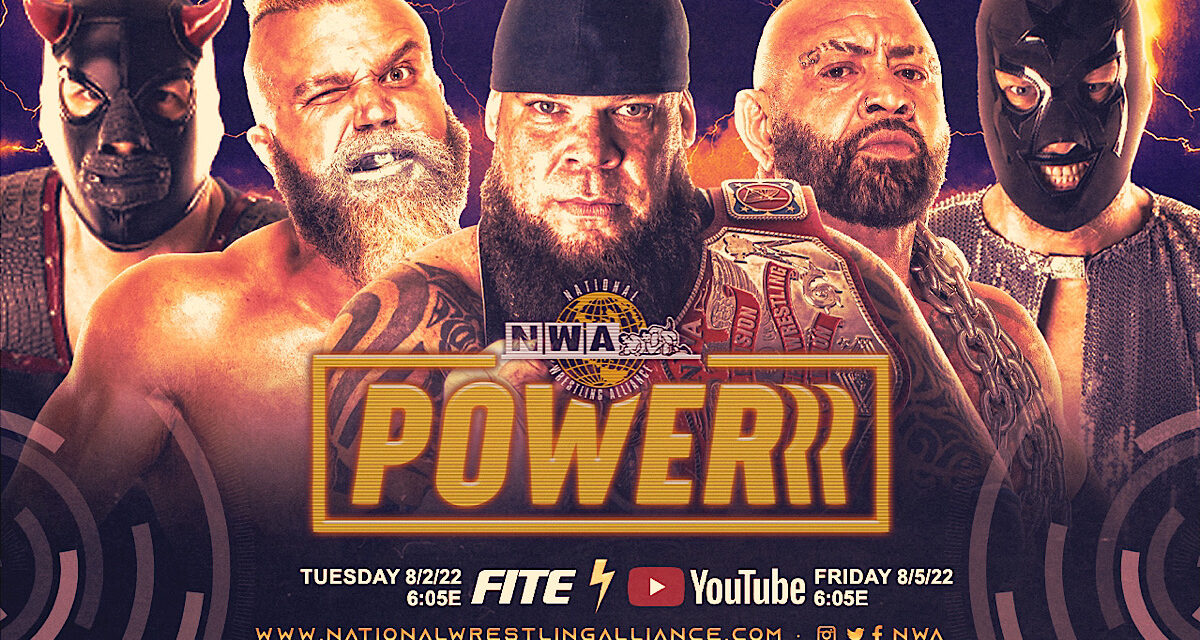 The National Wrestling Alliance is now nearing the homestretch to NWA 74, but there are title opportunities before we head to The Chase.  Odinson has the opportunity to face Tyrus for the NWA Television title before he faces Trevor Murdoch in the main event. Plus, May Valentine will get a Heart 2 Heart with Colby Corino, and a Team War is brewing with the Ill-Begotten and The Miserably Faithful.

but ring now at The Podium is The OGK with Kyle Davis. Matt Taven says they want to be the first team to win not just the ROH and New Japan tag titles, but also the NWA Tag Titles.  Taven says he’ll take care of the “keyboard Melvins” right after they take care of business.  Mike Bennett adds that they’re here for the competition, and that includes La Rebelion.  Now, he doesn’t like what they did to them a while back, but they get it.  Now that brings out Bestia 666 and MechaWolf and they spit strongly that if they want the belts, they gotta go through them. Taven riles them up saying they dropped the ball losing the titles.  He then gets in Bestia’s skull-painted face and says that wouldn’t have happened if Papi Damien didn’t interfere.  With that, it’s on like Donkey Kong as both teams brawl in the Skyway Studios, and this feud is just heating up, as Damien 666 comes from behind and blinds them with the mist.

Joe Galli, Time Storm, and Velvet Sky have the call, running down the aftermath of what we just witnessed, as well well as tonight’s card. So let’s step Into The Fire and your First Match of the night is for the… 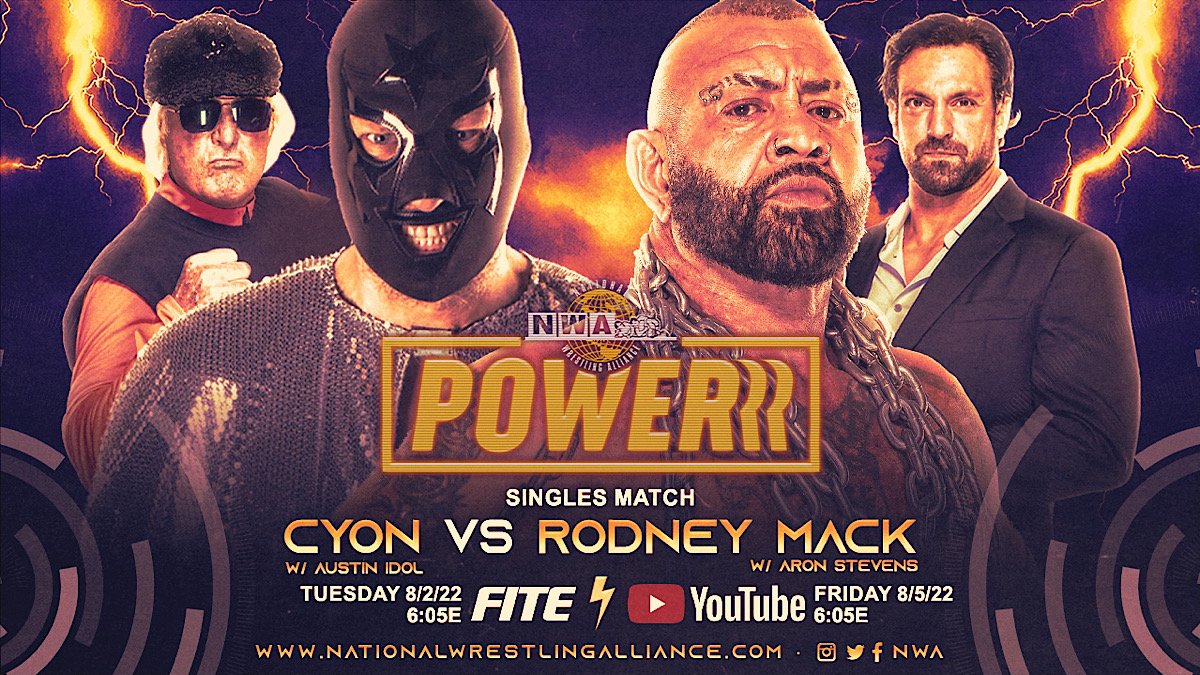 Galli inquires why Stevens is doing by Mack’s side (even though Stevens already addressed this) and wonders why he’s not in Brazil with May Valentine (yeah, that is a head-scratcher, huh?  I will develop this story and keep you up-to-date with any new information as it comes to light.)

Meanwhile back at the ring, The Redd Dogg is on the hunt and gives Cyon a massive suplex, followed by some ground and pound action to the Masked One.  Cyon quickly follows up with forearms, but Mack counters with a clothesline and a huge powerslam for a two count.  Cyon backs into the corner and Mack rushes at him.  Cyon evades, and Mack hits his shoulder on the top turnbuckle.  Cyon takes advantage and yanks hard, further damaging his wing.  Cyon gets a suplex and keeps Mack grounded, and then uses the top ring ropes to rake his eyes.  He nails with a DDT to Mack (and Stevens looks detached from the situation for most of the match), but only gets a two count.  Mack starts to return back on offense, whipping Cyon hard in the corner and then going for a sunset flip, but Cyon sits down and pulls his knee pad to hang on for the three count.

Your Winner via Pinfall:  Cyon

Mack is dejected by the loss, and Cyon is looking real good since getting back together with his “dad” Austin Idol.

May Valentine is backstage with Kamille and Thom Latimer. The Brickhouse lets us know she will be working both nights (thanks, Billy  Corgan), but hey…to her, it’s another notch in the belt of the One Time champion. Latimer is also self-assured at whatever gets thrown his way he will come out great.  He dove off a twenty-foot ladder last year, he recalls, so it doesn’t matter what will happen come NWA 74.

Valentine is now backstage with the NWA World Heavyweight Champion, Trevor Murdoch.  She inquires about him facing Da Pope next week, and he states asked for the match, and it’s between him and Pope.  No matter what, Murdoch says, at NWA 74 he will be there as the champ. Valentine presses on for more but Murdoch flatly states this matter is between him and Pope.

Tres Ominous, as I say in Spanish. 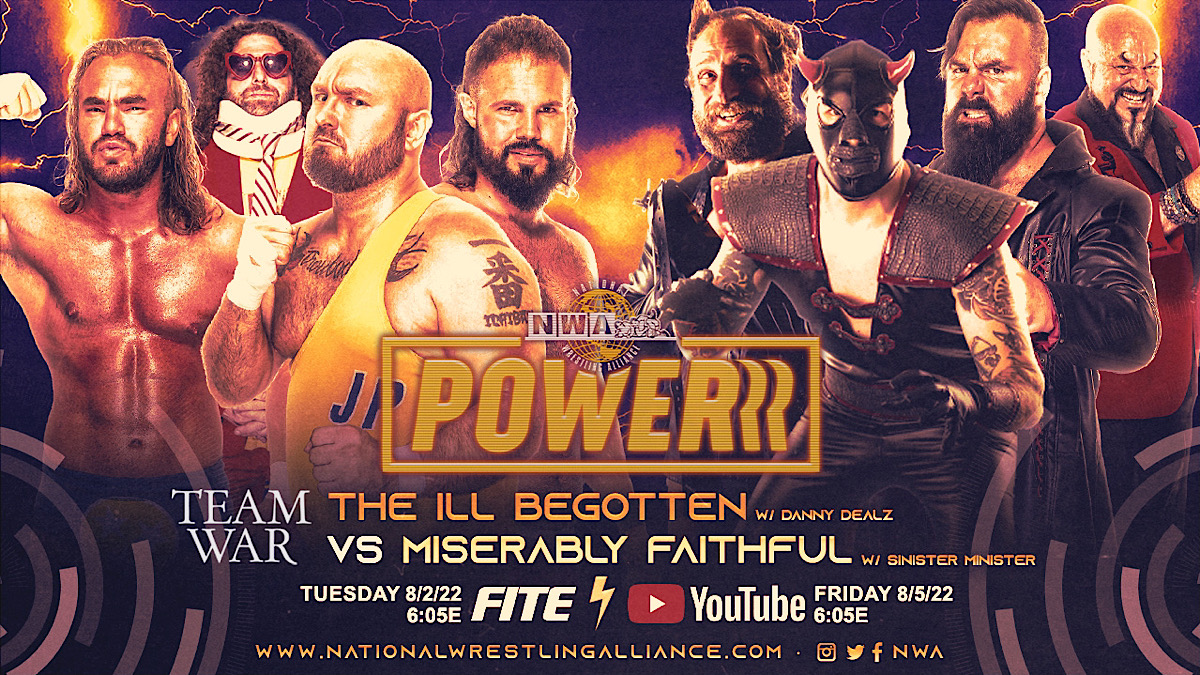 Galli goes over the rules of Team War, which are:

Sal and Freeman start for their respective teams, and Sal the Pal goes ballistic, but Freeman returns the receipt.  Freeman hits the ropes but Dealz trips his man and gets eliminated with a short flatliner by Sal.  Now Plunkett is in, and tries to figure out just what the hell is going on with Sal (Me, too, Tater Peeler.  Me, too, buddy). He rolls up Sal for a two count, and then he becomes more (!) unhinged.

How unhinged, you ask?  Imagine a rabid squirrel thinking he can rip apart a Rottweiller.

Sal goes up top for a high-risk move, but Plunkett clocks him midair and follows up with a DDT, and Sal is eliminated.  Gaagz The Gymp is in, and Plunkett goes to work and whips him hard into the corner…but he’s loving every minute of it.  Again, Gymp-a-Mania™ is running wild in the NWA!  Plunkett stays on offense but the unorthodox maneuvers of the Gymp keep him off-balance.   Gymp rakes his back and front and gets the sitting Gaagz Reflex (dragon sleeper) for Plunkett to submit.  Taylor jumps in and gets the Gymp on his shoulders for a fireman’s carry. The Gymp escapes to the ring apron and unzips.  Before The Tongue can be implemented further, Taylor dropkicks him to the outside to get eliminated.  Finally, Judais takes his time entering the ring and is deliberate with his moves, beating Taylor like a red-headed stepchild.  One crucifix bomb by Judais, and it’s all over.

Your Winner of Team War:  The Miserably Forgotten

May Valentine has a new edition of Heart 2 Heart with her special guest, the “Last Bastion of Professional Wrestling” Colby Corino. She has Aron Stevens nearby and KC Roxx. She starts by asking about his dad, Steve Corino, and what he was like.  He says his dad was okay, and took him around the world, and he was great.  Now the questions focus on Tyrus, and what Corino thinks of him.  Bewildered, Corinos says he thinks Tyrus is all right.  Stevens prods further (saying his dad was the best promo in the business and he needs to rise to that level), asking more questions on Tyrus.  Corino wants to walk out of this interview, but he is a professional and tries to answer, before wondering why they’re even talking about Tyrus.  Roxx tries to ask a question about what fictional animal Tyrus would be, and the best response is by Stevens who responds, “If you were a fictional animal, you should be a butterfly because they are quiet.”

Yeah, I’m bewildered, but entertained. It’s not quite Zack Galifinakis with Two Ferns, but it comes damn close.

But most important…why did they not go to the beach

We get recaps of this past NWA USA with the four-way women’s match but read here if you missed it.

May Valentine is with Caprice Coleman and Homicide. She asks The Notorious Legend why he faced PJ Hawx, and he says it’s for the future. Homicide also tells Luke Hawx to calm down with his issues towards him.  Valentine addresses Coleman, and he says he was called up for NWA 74 because he’s The Ageless One. Then he tells Homicide when he’s done with the kids to keep the belt warm for him.  Homicide’s eyes light up like, “Yo, what?”  Even I did a double take at that slick challenge.

And here’s the Main Event, and it’s for the … 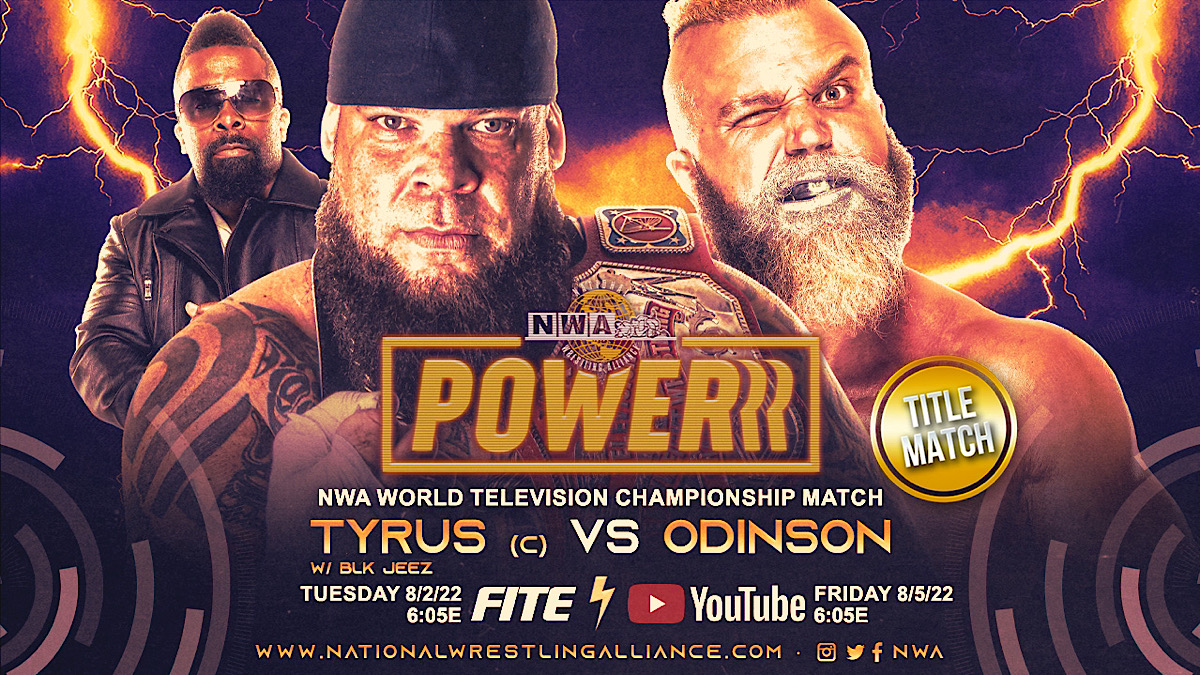 This will be contested under the NWA Television rules, with the match being under 6:05 minutes.  The bell rings and as the combatants circle the ring, at 5:35 Odinson attacks with European uppercuts to Tyrus, but it’s not long before The Man-ster is back in control, pushing him off.  Tyrus launches Odinson halfway across the ring with a suplex at 5:23 and lands a huge splash in the corner.  With 5:00 left, Tyrus hits an elbow drop and adds insult to injury by doing push-ups on Odinson’s back with a lackadaisical cover for a two count.  At 4:33, Tyrus grabs his trapezius and wears down Odinson, but he fights back up to a vertical base and bites his face at 3:51 to create separation.

Your Winner, and Still NWA Television Champion with 2:02 left:  Tyrus

Again, The Man-ster remains supreme in fending off another challenge, as the show rolls to credits.

A solid show, overall.  Some questions remain, though.  For example:  Who can stop Tyrus?  What’s Stevens up to?  Is the Miserably Faithful the most dominant stable in the NWA?  And why didn’t Valentine and Stevens go to Brazil?  Really?!  If given a chance, I would go with Valentine!

(I said too much)