Big opportunities open up on this NWA POWERRR 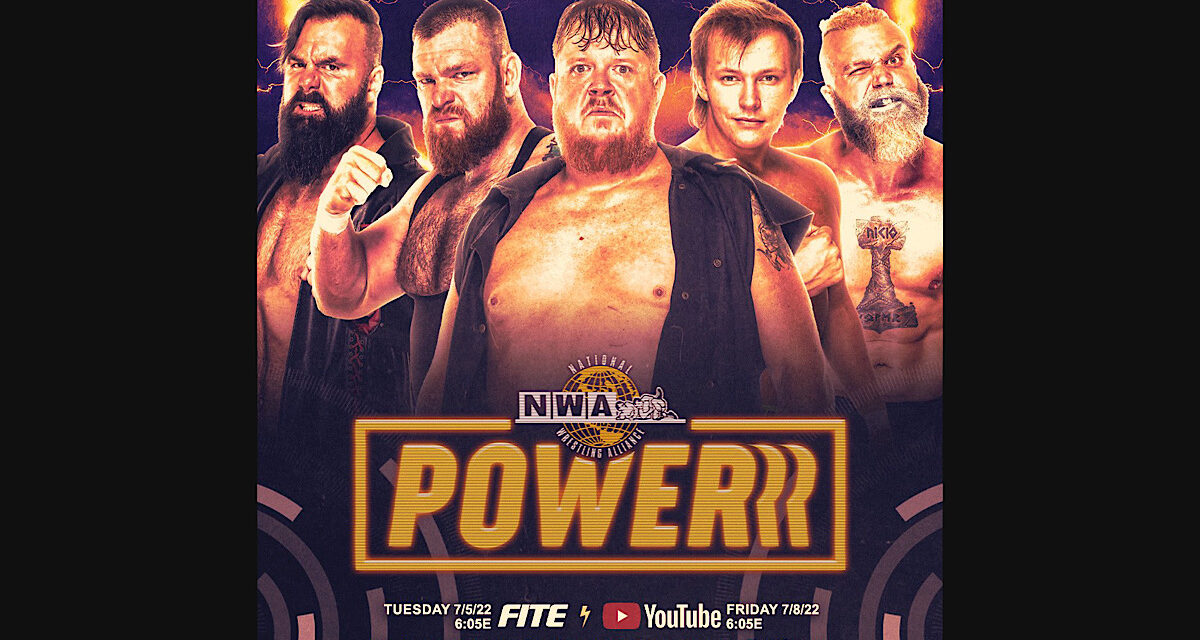 If nothing else, the National Wrestling Alliance offers every wrestler that comes through their doors an opportunity to make something of themselves.  This is true tonight as we have a three-way match to determine the number one contender for the NWA Television title, plus Trevor Murdoch in action in a non-title bout with Thrillbilly Silas, and The Fixers want to end things in one-on-one competition with Jay Bradley facing Kerry Morton in the main event.  All this, plus a major announcement later in the show.  Let’s jump to it.

No, really!  We get right to a cold open to the Skyway Studios in Nashville, TN.  Joe Galli, Tim Storm, and Velvet Sky have the call and we waste no time by going to the First Match of the Night… 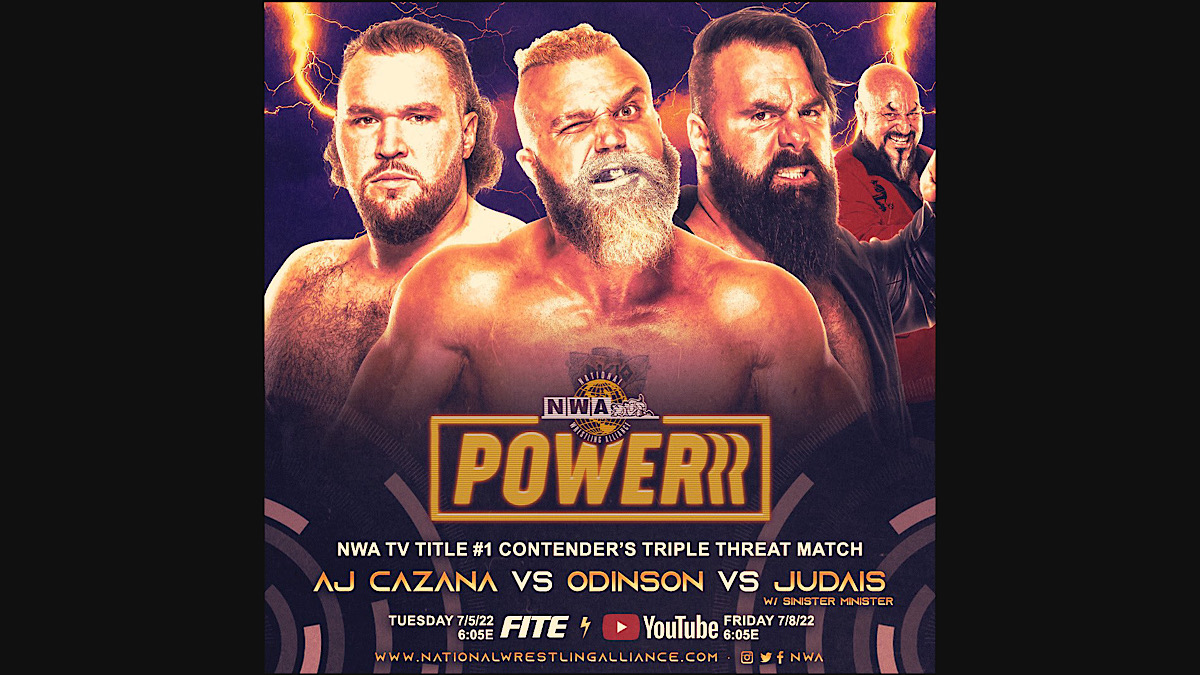 Cazana right off the bat pokes Judais square in the chest, and Priest of Punishment he takes no flak from him.  Odinson sends out Judais and he and Cazana battle out in the ring.  It’s a good back and forth match , and Cazana tried to get the pin early but he and Odinson get stun gunned on the top rope by Judais.  Back in the ring, he gets Cazana in the corner with tackles and attempts a boot but misses the mark.  then, Odinson tries to double suplex both men but gets reversed on the same move and he powders out

Cazana and Judais stands toe to toe in the ring with haymakers, but now Odinson gets back in, tucks Cazana’s head in Judais’ arm, and hits the  ropes for a flying European uppercut to send Judais back and land a DDT to Cazana.  Odinson continues the assault with European uppercuts to the  corners on both men, and then he suplexes Cazana onto a Judais for a two count.  Judais gets a chokeslam on Odinson to cover, but Cazana breaks the count.  They go back to blows but Cazana nails with a spinebuster to cover, but Odinson breaks count.  Odinson covers and Cazana breaks it up befor the ref counts to three.  Judais gets Cazana with a goozle to attempt a chokeslam, but Odinson tackles him out of the way and gets Cazana on his shoulders for the F10 for the win.

Your Winner, and the Number One Contender for the NWA TV Title: Odinson

Now we get the intro and a different video package to officially start the show.

At The Podium is Kyle Davis with the NWA Junior Heavyweight champion, Homicide.  Gives props to Ricky and Kerry Morton.  He says Kerry doesn’t have the “It Factor” yet, but will give him a title shot.  He has to take on VSK first, but that won’t stop The Notorious 187 as he promises he’ll be taking on all comers.

Aron Stevens and May Valentine sit down for an interview and share the journey and their  partnership with the fans.  Apparently they missed their flight to Brazil because there’s not enough staff, they missed the email, there was a flat tire, there was no money for an Uber, the tuxedo didn’t come back from the cleaners, an old friend came back from outta town.  There was a fire, earthquake, Locusts…what?

Oh, my bad.  That was from The Blues Brothers.  It’s so easy to get that mixed up.

In any case, Stevens addresses his work relationship with Rodney Mack, how he helped him way back when he was getting his start with bigger talent, and he wants to return the favor back.  It’s a bit rambling, but the gist is they’re here to stay in the NWA, you’ll see them from time to time,  and they’ll one day go to that beach in Brazil.  You know…that beach.  Valentine is about visiting family, her home town, and delicacies, but Stevens want to be at That Beach.  Ahhh, ain’t love grand?

There’s a recap of the NWA  Women’s tag team rematch with Pretty Empowered and The Hex on NWA USA but really, you should read it here to see what you missed.

May Valentine is with Chelsea Green, VSK, and Mike Knox and they are here on Cardona Family Business.  Green takes the mic and says they put the NWA on the map, and the “patriarch” Matt Cardona ensured that the family gets title shots, and they’re hold Corgan at his word.  VSK says he’s the next NWA Junior Heavyweight champ once he beats Homicide, and gold looks good in the family.  Knox, however, hasn’t heard about a title shot and he says/threatens Corgan not to  make him ask again.

Now for something completely different, here’s a non-title match with… 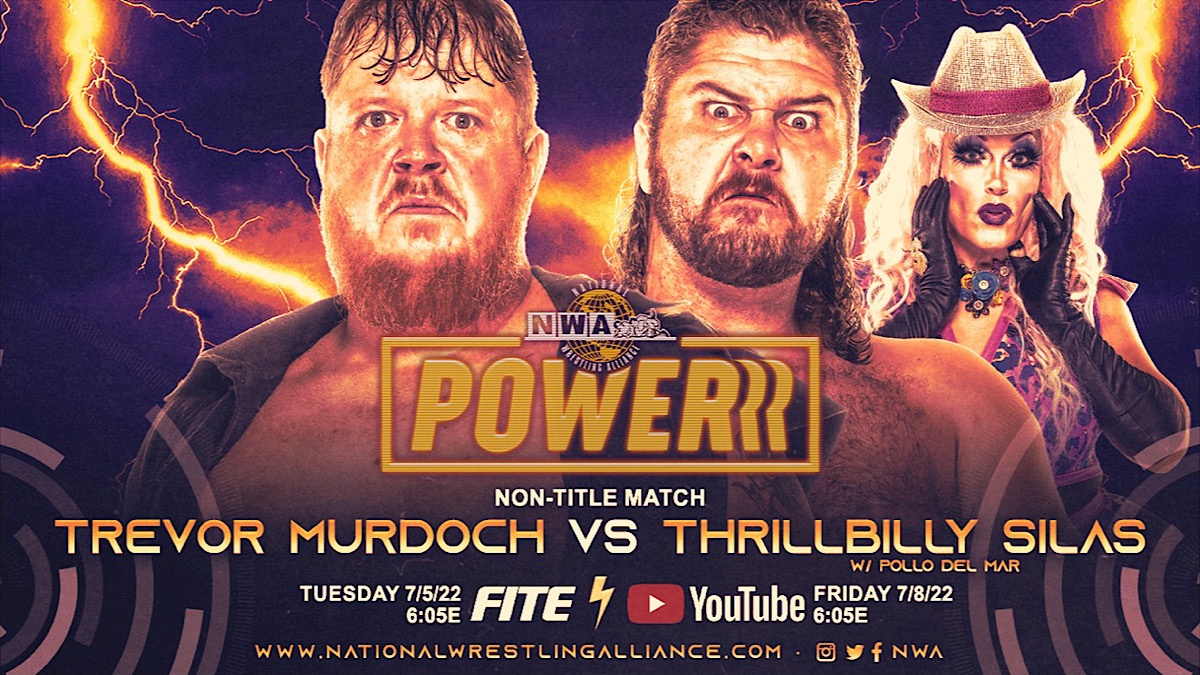 The best part is someone calls Del Mar a “Hussy”, and Silas defends her honor.  Again, love is grand.

Silas tries to put the badmouth on the champ and Murdoch slaps the taste out of his mouth.  He goes to work wih a huge spinebuster and followed by clotheslines in the corner to the Thrillbilly.  Silas is thrown in the corner but he manages with a elbow to the charging champ, but Murdoch lands another huge clothesline to knock him flat on his butt.  The champ is in full control, channeling his inner Harley Race.  As Murdoch hits ropes, Del Mar grabs his leg.  With the distraction, Silas gets Murdoch in a back suplex and the slam.  He follows for a leg drop but Murdoch rolls out and Silas has a sore tailbone for his troubles.  Murdoch comes back with a mafia kick to a backdrop, and a pop up powerbomb.  He delivers the flying bulldog and that’s all she wrote.

Your Winner via Pinfall:  Trevor Murdoch

The champ is with Kyle Davis at The Podium, and says someone hasn’t had a chance to congratulate him and that’s Da Pope.  He’s proud of Murdoch winning the Ten Pounds of Gold, and …he walks off, disrespecting Pope in the process.  Yeah, that dog won’t hunt.

May Valentine is with Allysin Kay on the loss of the NWA Tag belts.  There’s unfinished business Pretty Empowered, but speaking of unfinished business, she realizes it’s been awhile since she challenged Kamille for a the Burke.  Entering into the picture is KiLynn King, and…funny thing, she has unfinished business too with the NWA Womens champ.  So King proposes they both go at it in a number one contender match, and as they jaw jack, I say sign me up.

There’s a video package detailing of the feud between The Fixers and The Morton’s.  So now we head to the Main Event, and it’s… 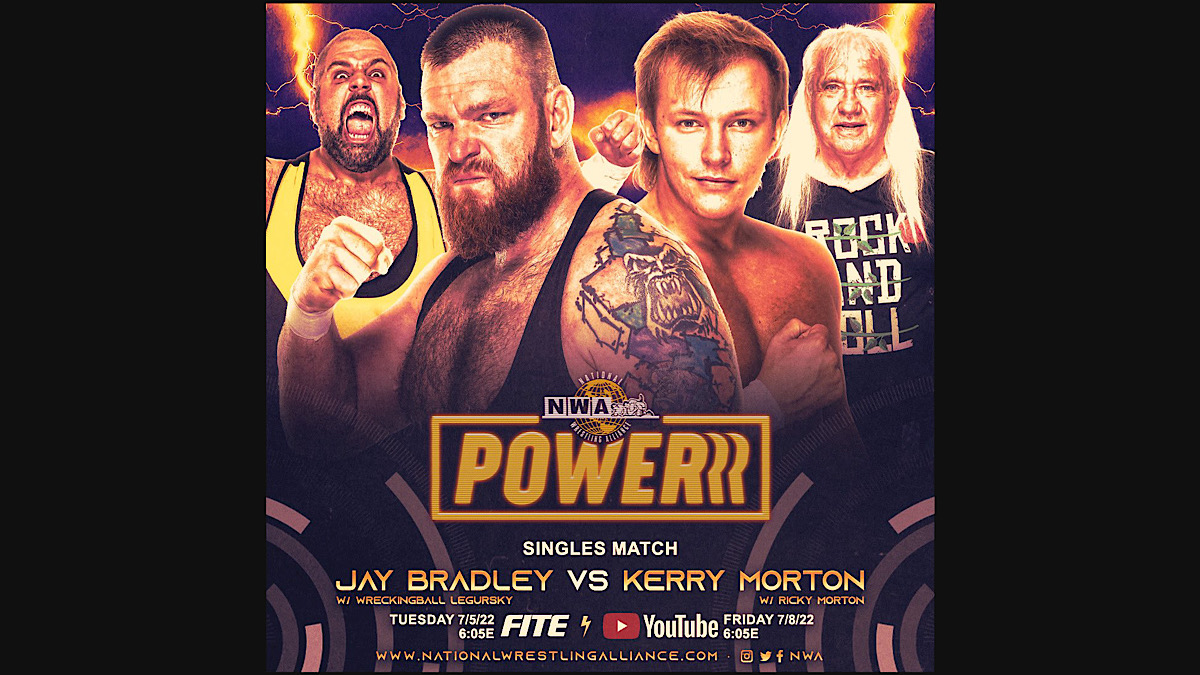 Galli says an exception was made to have their partners at ringside to avoid shenanigans from either side.  The bell rings, and Bradley tosses Kerry like a rag doll, and he is prepared to fix this Morton for good.  The Boss dumps Morton to the mat and follows with a knee drop.  Kerry tries to fire back, but Bradley reverses him to the corner and nails a big boot.  It is not looking good for the Future Legend and he rolls out of the ring and he talks to dad Ricky about the next best strategy.  As Kerry rolls back, he attacks with double axe handles to his chest, but Bradley is just too powerful.

He gets Kerry in a second rope elbow drop, then adds more injury by ramming him to the ring apron, and Bradley adds the coup de grace by propping Kerry on the top turnbuckle and then unleashing with a powerbomb.  Bradley is feeling cocksure, and Ricky goes to check on his son, but Bradley shoos him off the ring apron.   He turns and Kerry is back up with a flying knee lift to stun the big man, and he stacks up a dazed Bradley for the one, two, and three.

After the match, William Patrick Corgan is out to congratulate the Morton’s, and he heads to The Podium for his announcement with Kyle Davis.  There will be a tournament called the Race to the Chase, and the winner will face Trevor Murdoch for the NWA World Heavyweight championship.  The bracket is as follows:

The last one is a surprise because, prior to the pandemic, Aldis and Storm fought for a shot at the belt with a stipulation that if Storm lost he could never challenge again.  Corgan lifted the ban, but he can’t take credit for it.  The honor goes to Trevor Murdoch for fighting on his behalf for the opportunity.  We head back to commentary and Storm is fighting back tears, knowing that opportunity has come back again.  Galli and Sky congratulate their broadcast colleague, as the show rolls to credits.

Just a solid show that’s laying the groundwork for what to expect for the upcoming NWA 74.  The highlights of the show were the three way match, and Silas and Del Mar add something unique, even though they were in a squash match with the he champ, which still adds some layers.

But the news of Tim Storm back in the title picture?  That is huge news, and I would love to see this as a buildup to finally getting his hands on The Ten Pounds of Gold.

For now, see you in seven.