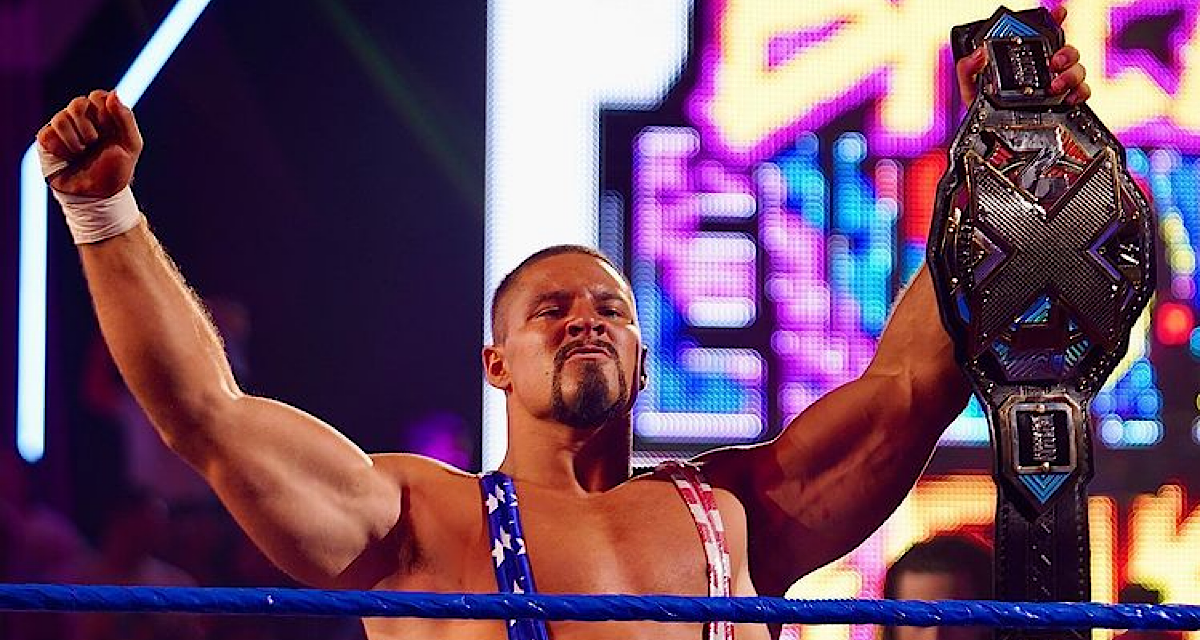 If there’s anything unanimous worth celebrating these past couple days, it’s that NXT 2.0 has a solid lineup of young champions to carry the brand. Carmelo Hayes, the Creed Brothers, and Bron Breakker headlined the latter end of Great American Bash with respectively great title defenses to prove that NXT, in part, presents some strong wrestling.

Orlando is hot in the opening goings where Toxic Attraction takes control preceding picture-in-picture. Jade makes a comeback against Jacy Jayne, but NXT Women’s Champion Mandy Rose interferes with a pinfall before getting ejected. Jade sends Jayne to the floor while Perez hits Pop Rox on Gigi Dolin to win the NXT Women’s Tag Team Championships for her team, ending the dragged-on, uneventful reign of terror for Toxic Attraction.

Tony D’Angelo shows pictures of Santos Escobar in the hospital to Legado del Fantasma, who react unreasonably mild to the information. Elektra Lopez “increased business at the port by 18 percent,” according to D’Angelo, and Cruz Del Toro and Joaquin Wilde will have one more chance to prove their worth to The Family.

Pretty Deadly’s promo package tries convincing everybody that Essex is the heart of fashion. They also vow to take the NXT UK Tag Team Championships back from Brooks Jensen and Josh Briggs.

“Trick Willy” pays homage to Muhammad Ali with his boxing-inspired attire, as North American Champion Carmelo Hayes plays cornerman. Williams’ in-ring ability has never matched his natural charisma, but he keeps up with the agile Lee. Williams is sent to the outside and douses his hands with rubbing alcohol, smothers Lee with it, and delivers a tornado kick for three. Sure, being partnered with Hayes means big shoes to fill, but Williams’ matches are always ridiculously bad.

Wendy Choo throws powder in Tiffany Stratton’s face while in the makeup chair, and the two competitors brawl backstage during picture-in-picture where the proceeding matchup actually starts.

Maybe the decision to start in picture-in-picture was to provide more time to matches that don’t consist of two caricatures. They trade big maneuvers and pinfall attempts as Stratton targets the left “digits” of her opponent – “fingers” in layman’s terms, and her twisting splash from the top gets the three-count.

“I’m gonna do whatever it takes to make sure I leave a champion,” Cameron Grimes tells Bron Breakker. “I wouldn’t have it any other way,” the champ responds.

Apollo Crews actually appears live for the first time in weeks, debuting yet another generic def rebel theme. In-ring, he thanks his children for reigniting his spark and begins naming possible opponents before Giovanni Vinci interrupts. He surprisingly showcases some confidence and charisma on the microphone, as he challenges Crews to a match next week – which will undoubtedly go hard.

Diamond Mine’s Ivy Nile is interviewed backstage about the group’s dissension before she overhears nearby arguing. She breaks up Tatum Paxley, Katana Chance and Kayden Carter and scolds her tag partner.

Grayson Waller sold Carmelo Hayes’ autograph “for 28 cents on eBay.” The champion responds, “Waller, you, you’re common. I am special.”

Hayes gets a special Fourth of July, American all-star entrance that radiates superstardom with Trick Williams in his corner. Commentary tries to pull the foreign bad guy card on Waller – who is Australian, which is vintage WWE American rah-rah delusion but nevertheless. It’s an even matchup between two smooth, athletic standouts following picture-in-picture, and the audience rises to its feet after an exchange. Waller hits some incredibly flashy moves that send Hayes outside, and Wes Lee appears to take out Williams. But Hayes capitalizes with a mid-air Codebreaker and delivers the top-rope leg drop to retain his gold. “Melo don’t miss,” and neither does Waller, as they are two shining lights in NXT 2.0.

Backstage, Xyon Quinn dismisses Apollo Crews’ message from earlier. “The future of this place is Xyon Quinn,” he says. The future doesn’t look very interesting. Next is NXT Women’s Champion Mandy Rose to talk down upon Roxanne Perez, who issued a challenge for next week.

Class is in session with Andre Chase, where Bodhi Hayward complains about not getting any sleep with roommate Thea Hail. Chase goes off on smart-ass Chad for offering a tidbit about the Fourth of July: “Who the f- did John Adams ever beat?”

It’s Diamond Mine versus Diamond Mine, as the Creed Brothers have attempted to “bite the hand that feeds them” against leader Strong. Julius Creed gets the upper hand over Kemp, and before picture-in-picture, Brutus Creed hits an insane top-rope cannonball to the outside, which cannot possibly be safe. Afterwards, Strong goads Julius to bring momentum into his and Kemp’s corner until the champion makes a comeback, pinning the latter to retain. The Creed Brothers help Kemp up, but much like reality (probably), Strong remains disgruntled.

Technically gifted in-ring and in mathematics is Axiom, who debuts a new vignette. Upon a quick Google search, Axiom is a name WWE had trademarked almost a year ago.

Backstage, Robert Stone and Sofia Cromwell complain about Von Wagner not being on tonight’s card. Solo Sikoa jumps in, and so do officials to prevent a potential brawl.

The numbers don’t lie, and they spell disaster for Grimes at Great American Bash, so it would logically seem like Grimes’ NXT tenure is running thin. Breakker gets the upper hand with a clothesline preceding picture-in-picture, but Grimes comes back with an outside senton thereafter. Grimes goes after the champion’s previously injured left shoulder, although Breakker fights through with a spinebuster. Picture-perfectly, Grimes connects with his signature Spanish Fly reversal, and Breakker recuperates with a big Frankensteiner. Orlando loses it when Grimes delivers the Cave In for two, and the champion puts it away with a mid-air spear.

Breakker stands tall at the entryway, but from behind is JD McDonagh with a blindside attack. He sends the champion through a table before the lower-third signal the end.

Hayes, the Creed Brothers, and Breakker have the potential to become future superstars. They’re carrying this brand like they carried tonight’s bottom-heavy show, that had a long first hour before the actually good stuff.