Uneven ‘Bruno Sammartino’ is long on Emilia, short on The Living Legend 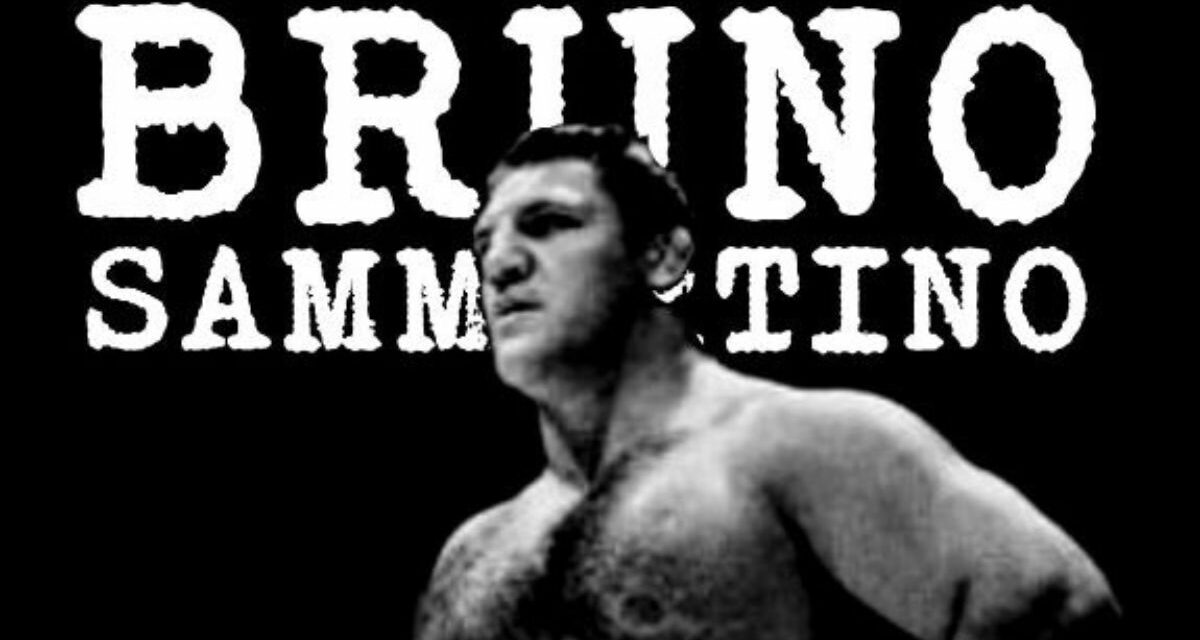 In Pittsburgh, there had long been rumors and talk of a documentary about the life of “The Living Legend” Bruno Sammartino. The film was to be spearheaded by local media mainstay Larry Richert.

In 2015, a film called Bruno Sammartino: La Mia Mama was shown on local Pittsburgh television during Mother’s Day weekend. With commercials, the two-hour film focused more on Emilia Sammartino than her famous grappling son. Even though that film was presented free to the public, there was still talk of a Bruno Sammartino documentary.

A film of that name was slated to be released with red carpet treatment in Pittsburgh in 2020, and then shown in New York and other east coast venues. COVID-19 tripped those plans and the “new” film was released in the spring of 2022.

At 93 minutes, the reimaged film by Richert (who narrates and produces) and writer/producer Patrea Patrick casts Charese Mongiello (misspelled in the credits as “Charesse Mongello”) as a young Emilia Sammartino and young Carter Kohler as Bruno. Richert and Patrick had worked on the Pittsburgh-set 2009 family film Shannon’s Rainbow aka Amazing Racer.

The movie begins with a legendary introduction of the then-245 pound champion in New York by Howard Finkel. Right after, Arnold Schwarzenegger excitedly explains what Sammartino meant to him as an athlete and friend.

Richert’s voice then extols platitudes on Sammartino as random clips from his career fly by. Bruno’s is called the “Quintessential American Story.” Parts of Schwarzenegger’s induction of the Italian immigrant’s WWE Hall of Fame speech – with a gleeful Sammartino listening with the packed house – is next. WWE clips of The Miz and William Regal add to the promising beginning. Then WWE-network moments featuring Ernie Ladd and John Cena, and James J. Dillon are added in.

Richert mentions Bruno picking up Haystacks Calhoun and the fact that Sammartino sold out Madison Square Garden 187 times, as well as stops around the globe.

There’s snippets of Bruno working out, as well as notes on how he was “on top for 20 years” and how fans tied him up for six hours, signing autographs.

After opening credits, Richert says Sammartino was born on October 6, 1935, in Pizzoferrato, Italy. Sammartino talks about his early life with his parents. His sister, Mary Sammartino, is then introduced.

For fans of Sammartino, the story of his childhood is well known and everyone involved talks about it to perfection. In retellings, his father, Alfonso, moves to Pittsburgh to work in the coal mines and steel mills. But before he can call for his family, World War II breaks out and Emilia and her three surviving children can’t get out of Pizzoferrato. When the Nazis advance, families flee into the mountains. Emilia is forced to sneak back into the village over the next 14 months to feed her starving family.

What’s different here is Mongiello’s performance as Emilia and a more detailed explanation as to what the Sammartino family did during that harrowing time in world history. In more recent interviews, residents of Pizzoferrato color the otherwise black-and-white newsreel footage.

Richert does an excellent job detailing the politics and war history of the time, and explains how the high mountain behind Pizzoferrato made the village a key player in the war.

Without explanation, the film jumps to Sammartino in the 1960s and the need for him as a “superhero.” Richert, who was personal friends with Sammartino, says that Bruno “wasn’t always a hero,” but mentions his in-ring success was a result of his “struggles as a young man.”

The narrative script is written by Patrick, who has worked in such documentaries as American Empire, Black Start and James Dean: Forever Young. She does not seem to have a great grasp of professional wrestling.

As has long been the case, Sammartino is described as a wrestler who brought fans together, no matter their ethnicity or lot in life.

There is footage of Bruno in Pizzoferrato a few years before his April 2018 death. The town unveiled a statue and museum in his honor. He had sworn never to return to Valla Rocca, the mountain where he and his family fled during World War II. However, along with family and friends, he did take the journey.

While the wrestling history is only glossed over, Richert and Bruno’s brother Paul tell more about the war from 1939-45. Alfonso Sammartino wrote frequently to his family from Pittsburgh, but Richert says that none of the letters were delivered. It’s moments like this that reveal how dour times were for families separated by conflict. Here, Patrick’s words excel as those trapped in Pizzoferrato were at the mercy of SS troops.

The village was bombed and the family had a couple of close calls for their safety.

In taped conversations from 2012 held in front of an independent wrestling ring in Pittsburgh, Bruno reflected on those times. These are stories he had told frequently over the years. The families climbed high into the elevation. Pizzoferrato’s elevation is about 4,104 feet, which means Valla Rocca had to be nearly a mile in the sky for oxygen-starved refugees. There, they made makeshift cover out of timber.

The film jumps to Bruno, Paul, and Mary’s memories of coming to Pittsburgh, where the future champion was bullied for being scrawny and sickly. Quickly, viewers are told Bruno found weight training and an apprenticeship as a carpenter.

Just as quickly, Richert returns to WWII and the results of bombing. Interspersed with the news footage is black-and-white recreations of daily goings on in the mountains.

If Bruno was a superhero, Emilia was Wonder Woman. She eluded SS troops, was captured, escaped from a pickup truck with barbed-wiring fencing, and was once shot in the shoulder and nearly bled to death on one of her countless trips up and down the mountains.

About 40 minutes into the documentary, the film once again jumps to the future (late 1950s) without explanation. Bruno talks about training and joining the Air National Guard. Moments later, he talks about Pittsburgh wrestling promoter Rudy Miller inquiring about the athlete he saw on Pittsburgh Pirates broadcaster Bob Prince’s talk show. Bruno told his wife of one-month Carol that he was going to be a wrestler. She wasn’t thrilled. Subsequent film of the Sammartino’s sons David, Darryl, and Danny flash by without comment.

Here, Sammartino talks about starting to wrestle and vaguely mentions wrestling in Canada for a year-and-a-half. Fans, new and old alike, would like to hear details. Instead, there’s more exposition from Arnold.

Some previously-recorded WWE wrestling history from Jim “J.R.” Ross follows for the most wrestling-focused segment so far. Ross talks about the lineage of the then-40-year-old WWWF title and how in 1963, Bruno won the belt in 48 seconds. Immediately following is audio from Vince McMahon explaining that the belt changed hands in 55 seconds. A wrestling scribe would have handled that differently.

There are a ton of video fragments of Bruno wrestling a dozen or so different men, including Superstar Billy Graham, and none of it is acknowledged. Then, there is a brief mention of Chick Garabaldi, who died during a February 1961 match with Sammartino and how Bruno was “devastated.” Cut to the next scene.

There are mentions of Bruno’s blood-feuds with George “The Animal” Steele and Killer Kowalski, as well as an accredited cameo by “Chilly” Bill Cardille.

Another treat is a small clip of Alfonso Sammartino talking about his son. It’s not often fans have seen tape on Sammartino’s father, who passed away in 1985.

Writer/producer Patrick also provides at least two original tunes to the soundtrack. Here, the slow, folksy and out-of-place “Mortal Ground” plays as Sammartino talks about the affinity he had for his father.

Bruno agonized over the memories of Pizzoferrato and there is more original film of Mongiello as Emilia climbing hills. These are very well done. Even decades later, the Sammartino children get emotional talking about the trials their mother endured. 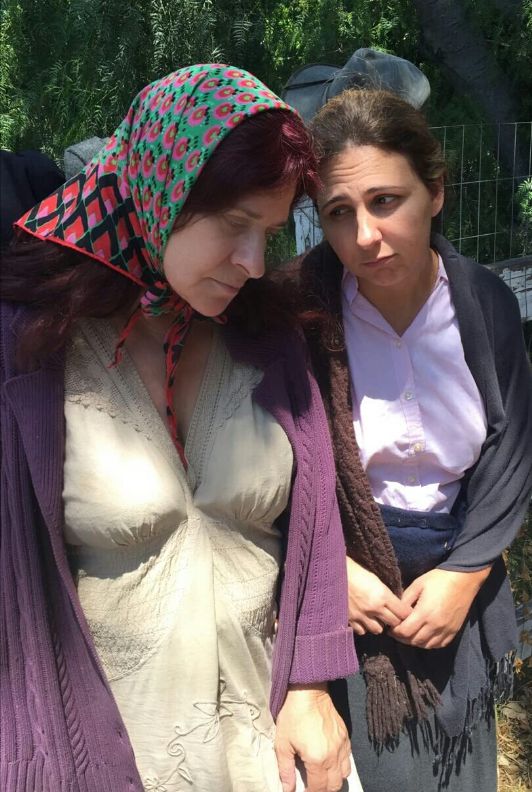 Charese Mongiello as Emilia Sammartino and Angela Capri as Aunt Mila in one of the reenactments.

Richert shares Bruno’s “moral code” and the first of at least two mentions of the ambiguous “clean wrestling.” There’s WWE film of the late-in-career feud between Bruno and Roddy Piper. There are flashes of Sammartino sending Hercules Hernandez over the top rope in a Battle Royal and a match with Nikolai Volkoff. None of it is elaborated upon.

Triple H unveils the bronze statue to Bruno and a glimpse of a 70-something Sammartino walking around his modest Pittsburgh home.

There’s more of Emilia and a young Bruno. Emilia was wounded in the shoulder. There are recreations of how the family nearly met their doom, as well as the famous “leeching” story. All of this is very effective.

The family finally makes it to America and Bruno retelling of seeing the Statue of Liberty is a fan favorite.

Because it is a story about one of the industry’s most recognized wrestlers, there has to be at least one in-ring story, and it’s about Stan Hansen dropping Bruno on his head. Without much fanfare, the story is told. There is no mention whatsoever of Larry Zybszko, Pittsburgh’s famed Studio Wrestling TV show, or Bruno’s standing as a peer to such athletic giants of the time as Roberto Clemente – or any other sport for that matter.

In one of the documentary’s strangest moments, Richert blindly reads that Bruno is “one of the ten sexiest wrestlers ever” as pictures of Edge and Debra McMichael slide by. Seconds later, pictures of The Rock, John Cena and a three-second video of Trish Status vs. Stacy Keibler race by.

Without reason, there’s talk of how a 50-plus year-old Sammartino is “still in great shape” and video of his WWE induction. The documentary ends with Carol Sammartino talking about the champion’s life in retirement, with photos and a quick video of Bruno back in Italy.

More proof that the film was not produced by professionals familiar with the squared circle, Richert reads that Sammartino was the “World Federation of Wrestling” champion. It boggles the mind that that wasn’t corrected. 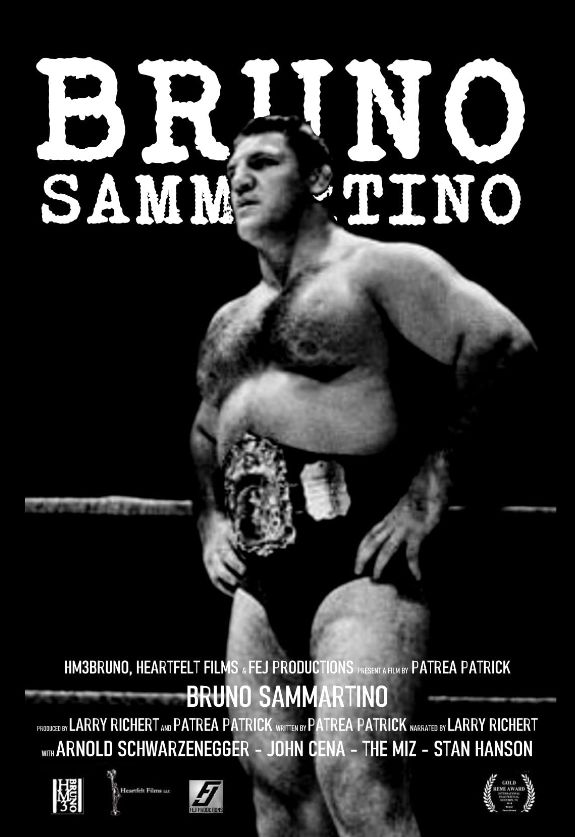 Bruno Sammartino is really about Emilia, just like in its original incarnation. It’s all familiar, but unfortunately it’s sloppy stuff for fans yearning for an original wrestling documentary on one of grappling history’s greatest subjects.

Bruno Sammartino is available for streaming and purchase at Amazon and other well-known outlets.