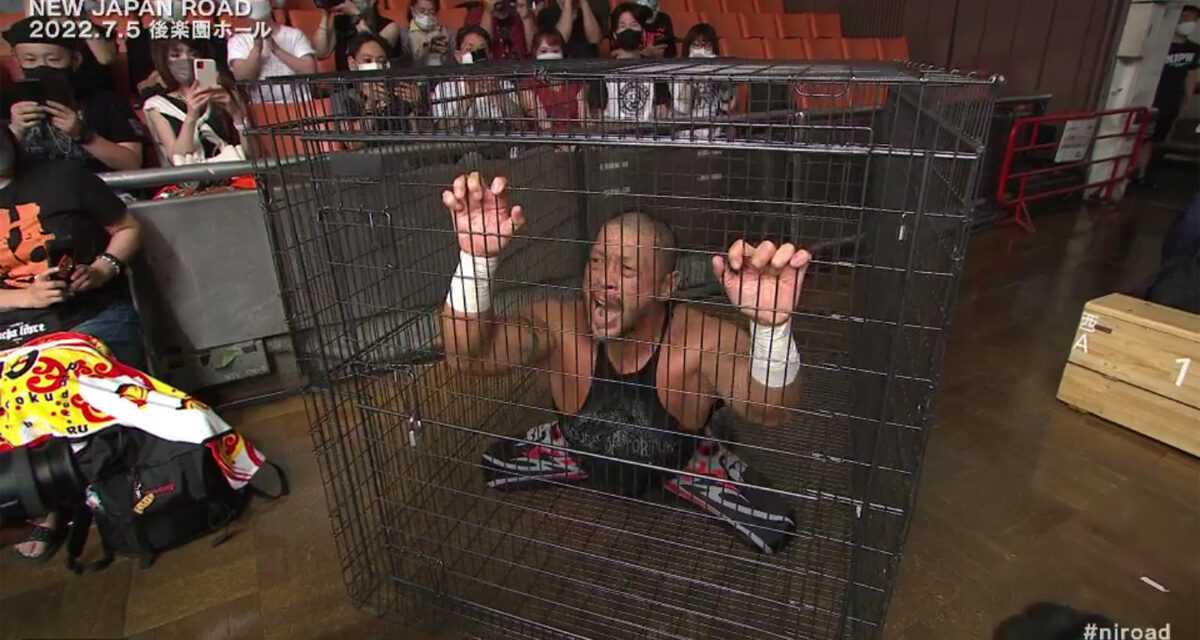 It was a dog-eat-dog confrontation when Toru Yano and Dick Togo battled it out in a dog crate/cage match at New Japan Road. The object of the match was to lock your opponent in the crate/cage to win.

Both Yano and Togo demanded the key to the cage from the official right after the bell was rung. He refused to hand it over as neither man had incapacitated the other. A falling fist drop stuns Yano on the mat. Yano ducks and slaps Togo in the back of the head. Togo returns the favour when Yano asks for the key again.

Togo takes the key from the official but when he turns around Yano nails him with a turnbuckle pad and takes the key.

On the floor, Togo begs off. He tries to punch Yano in the “lower abdomen”. Yano blocks it and kicks him there. Yano is thrown into the ringside barricade. 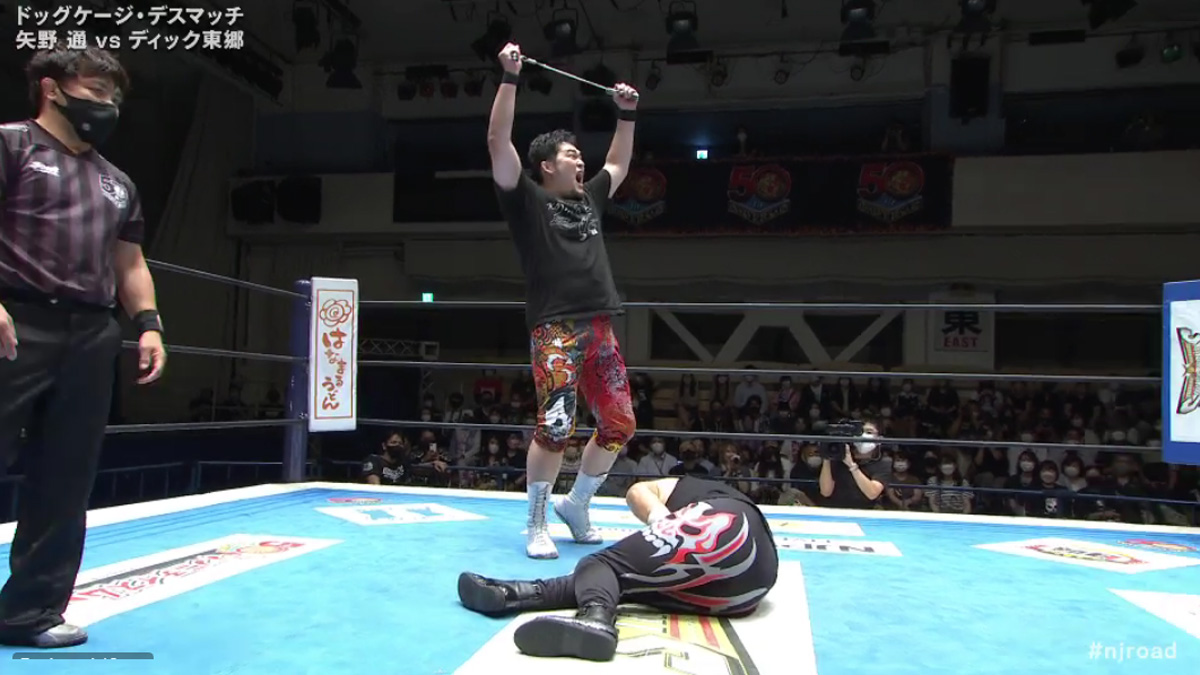 An atomic drop forces Togo to drop the garrote. As Yano brandishes the garotte the lights in the arena go out. When they come back on there is a steel chair in the ring and Togo is strangling Yano with the garrote. Evil, Sho and Yujiro Takahashi come out. They grab Yano and walk him to the cage. Hirooki Goto, Yoh and Yoshi-Hashi run out from the dressing room and swarm The House of Torture. Okada, the leader of Chaos, remains on commentary. Yano slingshots Togo into the cage and locks it to score the win. 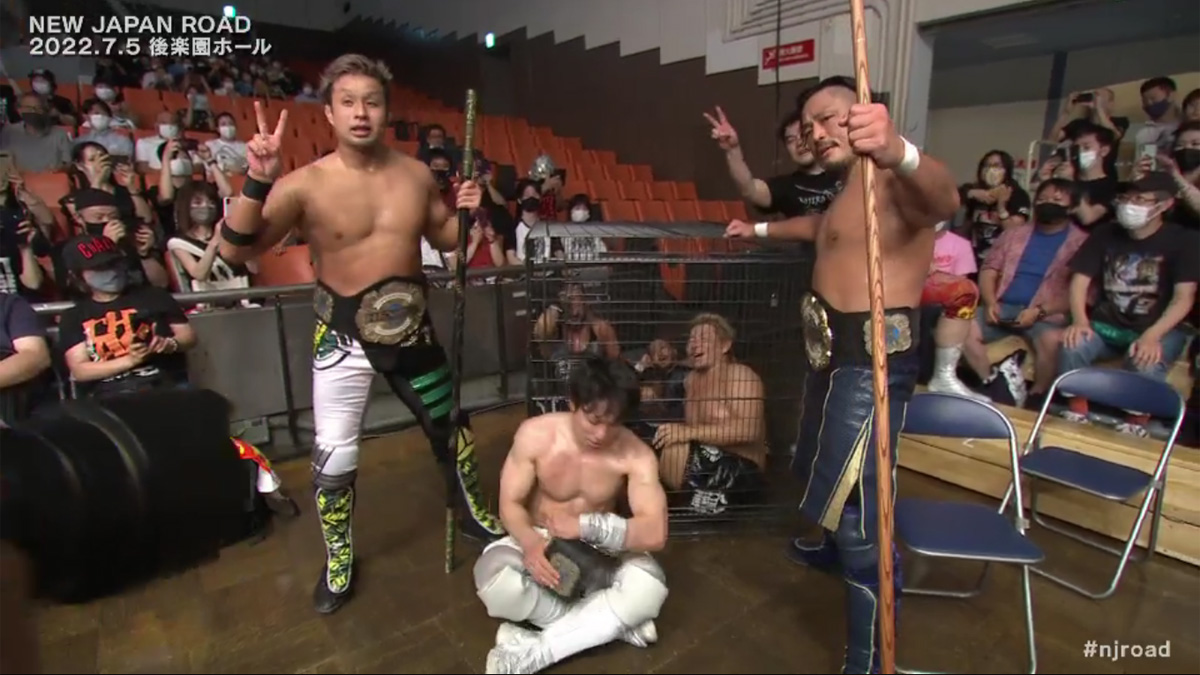 Chaos rubbing their title win in on a helpless House of Torture. Courtesy: NJPW.

The event also saw new NEVER Openweight 6-Man Tag Champions crowned as Chaos defeated The House of Torture. The dog crate came into play as House locked Hashi, Goto and Yano in the cage as they beat the stuffing out of Sho in the ring while the official remained knocked out. Chaos escaped the cage. Yano had hidden away a secondary key, apparently. Goto begins wailing on Torture members with his staff. Yano locked Evil, Yujiro and Togo in the cage leaving Sho in the ring alone to receive a massive beatdown at the hands of a vengeful Chaos. Yoh pinned Sho to win the titles for Chaos.

Wato gets the pin for his team.

Honma misses a kokeshi headbutt and is pinned by a Kojima Lariat.

DKC continues his mad martial arts persona. He challenges Ishii with a zillion chops and kicks during the match. Ishii absorbs them all and drops DKC with his. Ishii pins DKC with his Brainbuster. Connors and Ishii get into each other’s faces once again.

Gedo pulls out his brass knuckles. This distracts the official so that Kenta can bring his crutch into play. Tanahashi just ducks and clocks Kenta in the face. Jado submits to The Ace’s Cloverleaf submission. 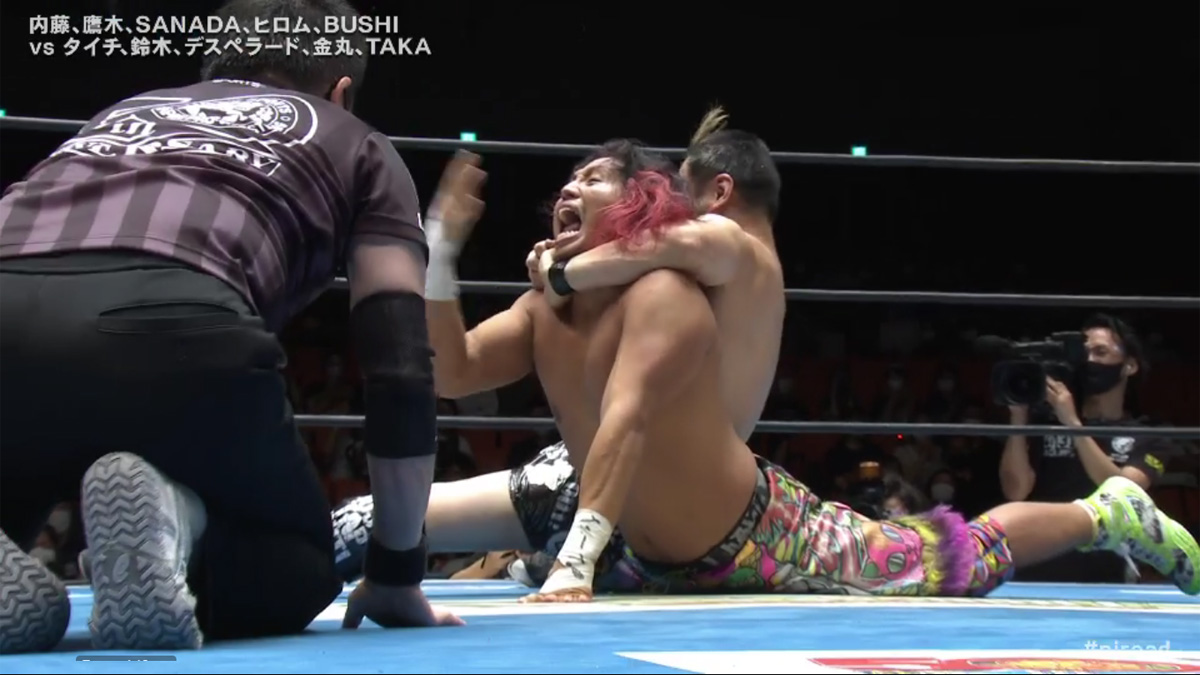 Taka submits to Hiromu’s D. Sanada and Taichi trash talk some more after the match.