Raw report: A new title contender has arrived (in Theory) 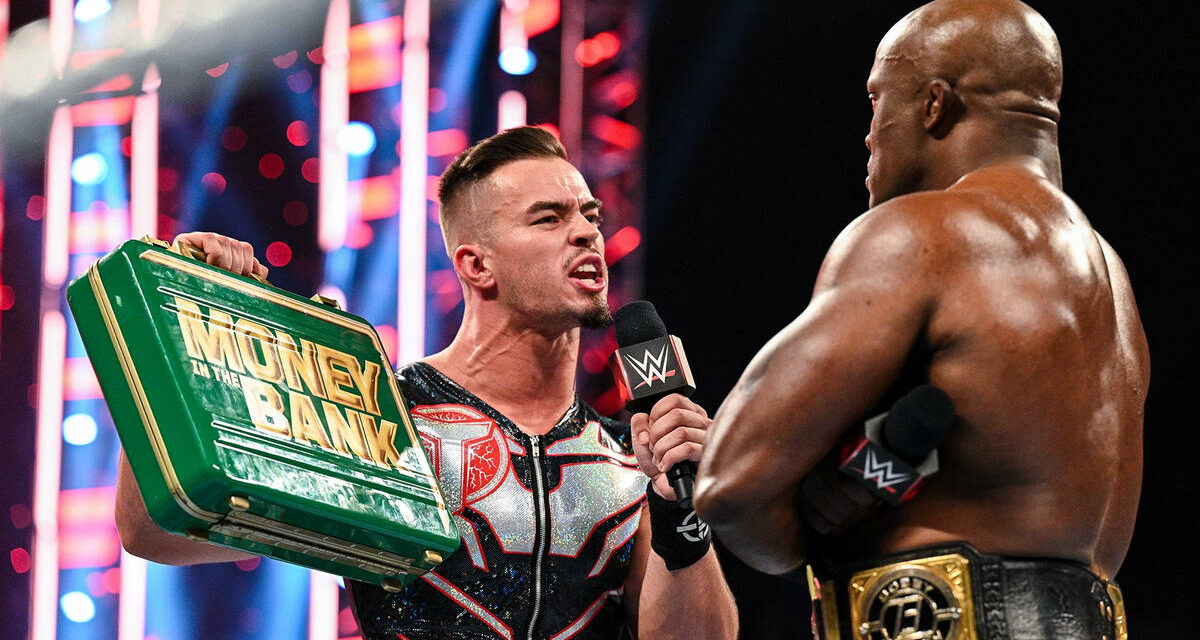 At Saturday’s Money in the Bank show, Liv Morgan (the babyface) won the SmackDown Women’s Championship in heelish fashion, while Austin Theory (the heel) became Mr. Money in the Bank despite not being one of the match’s participants. I suppose it’s time for Raw to sort some of this out and plot a hurried path to SummerSlam on July 30th.

First out through the curtain is the brand-new United States Champion Bobby Lashley, getting some love from the San Diego crowd and pumping up some love for the U.S. of A on this 4th of July. He lays down a challenge against any man in any division or any promotion, claiming that nobody can take that title from him.

Happy to interrupt is a very happy Austin Theory, toting his briefcase and claiming his moment in the spotlight. He says he’ll be riding his contract all the way to the top, but he also has a rematch against Lashley for the U.S. title at SummerSlam, and is already thinking about cashing in on either Brock Lesnar or Roman Reigns after their Last Man Standing Match at the same event.

Lashley is tired of listening to him and is ready to throw down, but Theory catches him with the briefcase and gains a momentary advantage. Lashley overpowers him, though, sending Mr. MITB scrambling up the ramp.

Backstage, Megan Morant wants to know what Rey and Dominik Mysterio thought of Finn Balor’s derogatory comments about the duo last week. Neither are too concerned and are planning on proving their superiority in the upcoming tag match.

Balor and Priest attack the Mysterios from behind, using their entrance as a distraction. It’s all right, though, the father/son team will get a chance to recoup during a commercial break.

Dominik is moving quickly around Balor, sending him rolling into his own corner where Priest tags in. A dropkick by the younger Mysterio stuns Priest, who then dives over the ropes as Dominik drops to the mat. Rey tags in and hits a seated senton from the apron, but when he follows Priest back into the ring a stiff right hand awaits him.

Dominik re-enters with a cross-body onto Balor, then sets him up for the 619. Priest tags in blindly though, and grabs Dominik in mid-swing, hoisting him and dropping him clumsily onto the edge of the barricade before another break. Back once again, Dominik drops Balor with a slow-motion slingblade and both teams tag.

Mysterio over-rotates on a tornado DDT and almost inverts it on Priest. Dominik then gives his dad an assist as he leaps up onto Priest for an avalanche hurricanrana. Both Priest and Balor end up draped on the second rope and the Mysterios hit a double-619 — Rey following up with a frog splash with Balor reversing it into a cradle for a two-count.

Looking for an advantage, Balor gets his hands on a chair, and Mysterio pays homage to Eddie Guerrero as he falls flat, feigning that Balor had decked him. That’s enough for the ref to call for the bell.

Winners via lying, cheating, and stealing (and disqualification): Rey and Dominik Mysterio

Megan Morant is backstage with another interviewee, chatting with The Miz about the signing of Logan Paul. He claims to want to mentor Paul about making the move from Reality TV to WWE. If Paul refuses his help, though, The Miz will be relentless in humbling him. Oh, and yeah … we’re still talking about The Miz’s balls, so that’s where things are right now.

In a clip from earlier today, The Alpha Academy crash a 4th of July party seemingly hosted by The Street Profits. The smack talk leads to a challenge for a hot dog eating between Angelo Dawkins and Otis, presumably to be shown later tonight.

Back in real time, The Judgment Day attacks The Mysterios backstage, so that fight is not over.

AJ Styles VS. The Miz

Styles is in charge early, with a dropkick and a clothesline sending Miz over the top. Styles has time for a semi-phenomenal forearm to the floor berore we need some commercials. Upon return, Miz gains an advantage by rolling out of a Calf Crusher and delivering a DDT for a two-count. A truly Phenomenal Forearm soon follows from Styles, though, for the very easy win.

Styles has a few moments to celebrate before Tommaso Ciampa attacks from behind, allowing Miz to hit a Skull-Crushing Finale on AJ.

SmackDown Women’s Champion Liv Morgan gets the ring to passionately, but rather repetitively, thank the fans. So, who’s going to interrupt the love-in? It’s Natalya who stalks out to claim that Morgan owes her a big thank you. Carmella also prances out, wondering why either of them are even here on Raw tonight. As the heels start a two-on-one beatdown of Morgan, Bianca Belair comes to the rescue, setting up a tag match, naturally.

Belair picks up where she left off on Saturday, taunting and overpowering Carmella. Both teams tag, and Natalya kicks Morgan down to the mat, only to have Morgan return the favour. A slapfest ensues before Morgan ends up in the Sharpshooter, only to have Belair throw her a braid and Rapunzel her to the corner for a tag.

Belair holds up Natalya in a stalled suplex, not realizing that Carmella had tagged in and takes a low superkick that also drives Belair’s head into the corner post. Coming back from a break, Morgan gets a hot tag and runs roughshod over Natalya, hitting a modified Jersey Codebreaker for a two-count. Things break down as Belair and Carmella fight outside, with Morgan pushing out of a second Sharpshooter attempt for ObLIVion and the win.

We’re back for more shenanigans at the 4th of July party. Mustafa Ali swipes food from Veer Mahaan, Dana Brooke runs away from her usual 24/7 pursuers, and Ezekiel accidentally sprays Seth Rollins with ketchup.

Next is a creepy vignette, which also aired during Money in the Bank. It’s The Fiend, right? No, it’s Edge. Undertaker. Boogeyman. Waylon Mercy? I guess we’ll see.

What, we don’t even get some kind of ketchup-based stipulation? Ezekiel hits a tall German suplex on Rollins, then mule-kicks Seth away from the corner before launching him high in the air to the floor. Another press slam by Ezekiel on the floor sees Rollins dumped over the barricade before a break.

Upon return, Ezekiel continues his strong run with a pair of corner splashes and a spinebuster, plus a lifting knee into Rollins’ face after he leapt off the second rope. The ending comes quickly, though, as Rollins escapes from a backslide and counters with a Stomp for the victory.

After the bell, Rollins re-enters the ring to continue the attack, but he’s felled by Randy Orton 2.0 Matt Riddle and an RKO.

Back at the party, Akira Tozawa is the surprise winner of the hot dog eating contest. Cool.

It’s Dawkins and Theory to start, as Austin opens with lots of flexing while Dawkins responds with a kick to the head. The heels start quick-tagging on Dawkins until Angelo rolls out of an ankle lock and tags in Ford. The tags break down, actually, as all three babyfaces enter the ring to clear the ring of the heels before ads.

Coming back, Otis flattens Ford in the corner with a Bundy-style running splash, tagging in Theory who takes a spike DDT for his troubles. Lashley gets a hot tag, causing Theory to turn and run which is always entertaining. Gable is fed to the wolf instead, taking a powerslam from Lashley that looked like it was going to be the end before Otis arrived to break up the pin.

After some bits of Otis taking punishment to the gut (which is hurting after the hot dog eating contest), Lashley hits a spear on Gable for the victory.

With only Gable and Otis left in the ring, Otis has had time to fill his mouth with puke and hurls all over the place.

Megan Morant is on the scene again, listening to Becky Lynch run down her full list of complaints ahead of her No Holds Barred match against Asuka later tonight.

In the ring, hopefully with a new mat cover, R-Truth is dressed up as Uncle Sam, and he’s booed a bit which is weird. He honours the main cast of the movie Independence Day, but he’s interrupted by the only slightly less stereotypical duo of Ludvig Kaiser and Intercontinental Champion Gunther.  I guess having Austrian villains is kind of a safe foil for Uncle Sam right now?

R-Truth gets a mild “U.S.A.” chant going before he is suddenly thrown into a match.

A boot, a powerbomb, and a victory.

This underwhelming segment brought to you by those in the booking committee who are stuck in the 1980s. 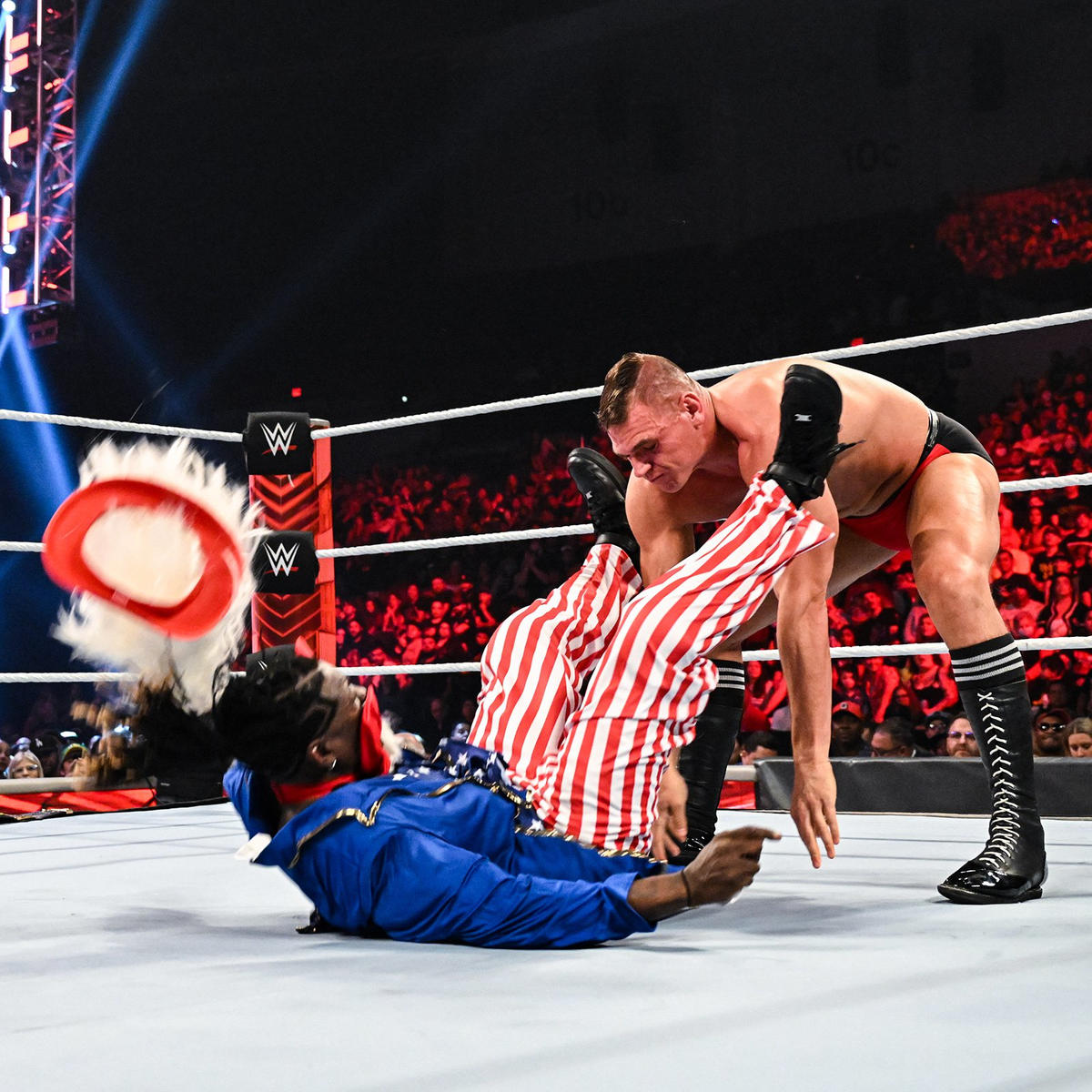 Down goes Uncle Sam on the fourth of July! Is this some kind of political statement? Photo: WWE

Backstage, Alexa Bliss is with Sarah Schreiber, saying she’s happy for Liv but ready for her own title run as well. She’s interrupted by Asuka, who is excited for her own match. Nothing to write home about here.

Immediately upon the bell, Asuka nails Lynch with the garbage can in hand. Lynch has a hard time wedging a chair into the corner, and when she finally does she’s sent running into it with an Irish whip (the nerve). Fighting to the outside, Lynch uses a Becksploder to land Asuka on a stack of chairs on the floor, but moments later Asuka uses her flying rear end to send Lynch through the barricade.

Coming back from a break, the crowd is chanting for tables as Lynch looks to leap off the top rope, only to be superplexed onto a stack of chairs inside the ring — that looked nasty, but it only gets Asuka a two-count.  At least the crowd thinks this is awesome. Asuka plants the can over a kneeling Lynch, striking her at will before hitting a missile dropkick as Corey Graves dubs her “Asuka the Grouch’. Darn you, Graves, for thinking of that first. 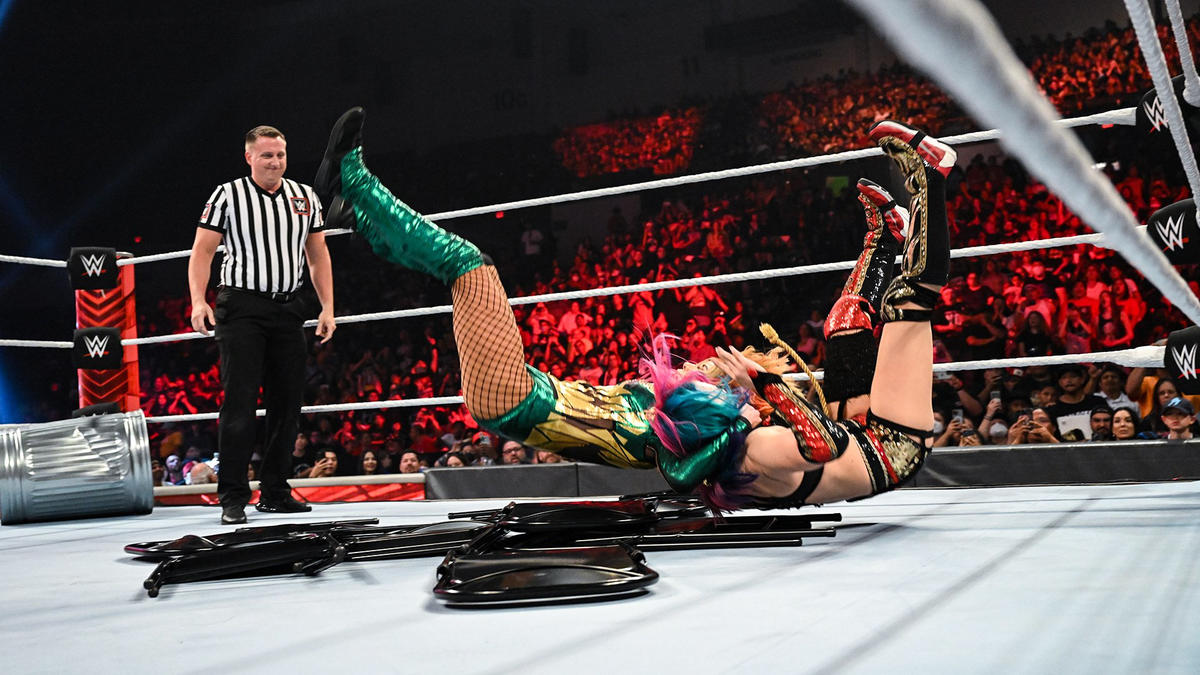 Moments away from what will surely be an uncomfortable impact. Photo: WWE

Asuka really goes for the crowd approval as she pulls out a table, but Lynch fights her off and sets it up in the ring herself. Undeterred, Asuka goes under the ring again and returns with a parasol. She strikes Lynch with it once, but Becky grabs it and uses it to block Asuka’s green mist.

Maneuvering Asuka up the ropes, she brings her current nemesis down onto the table with an avalanche Manhandle Slam and that’s enough.

TOP PHOTO: Austin Theory ups his insufferable gimmick with the briefcase in too, talking trash to Bobby Lashley. Photo: WWE

Feeling more like a Money in the Bank post-show than any kind of build to SummerSlam, this joins the incredibly growing list of disposable, “really didn’t need to see that” episodes of Raw.