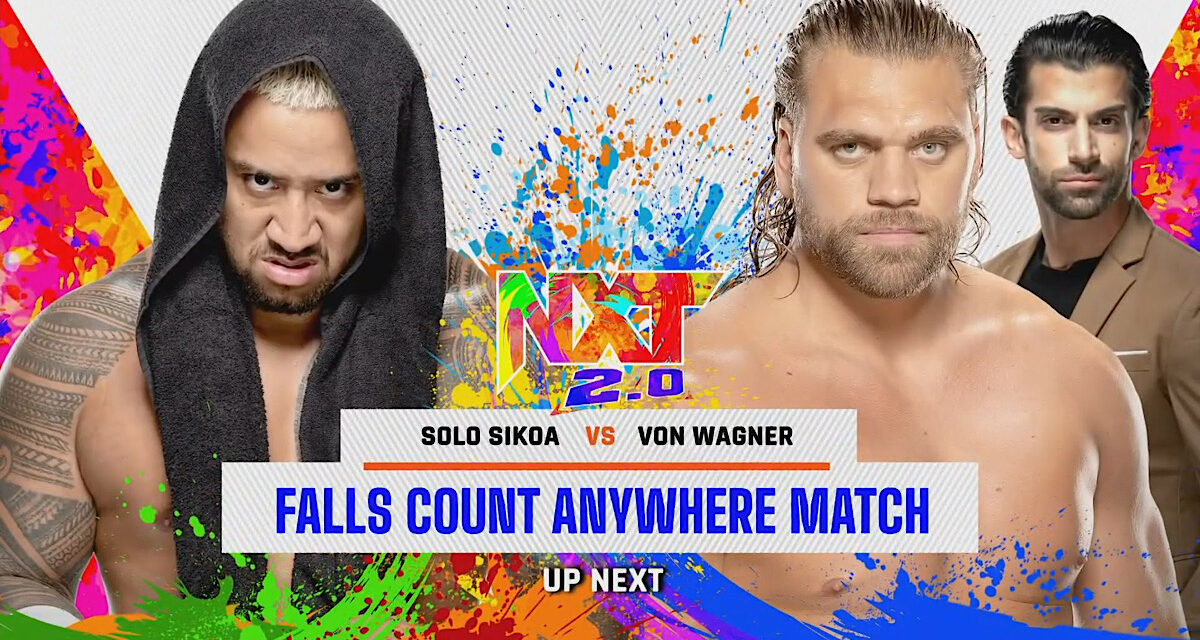 Sofia Cromwell left NXT and her client for male models on Smackdown, but Von Wagner is holding down the fort without her. Against rival Solo Sikoa, two of NXT 2.0’s best homegrown talents main-evented tonight’s episode in a Falls Count Anywhere match, showing that their ceilings are higher than Pure Life bottled water commercials – although that was admittedly very funny.

Alundra Blayze made a cameo last week, pulling the vacated NXT Women’s Tag Team Championships out of the trash. When Cora Jade turned on partner Roxanne Perez, it was an opportune moment to ditch the titles completely, but nevertheless, the winners of tonight’s opening match become the new strap holders. As the least polished team competing, Leon and Feroz are eliminated first by Diamond Mine’s Nile, who could potentially double the faction’s gold collection. However, when former champion Jayne eliminates Paxley, the result is clear – unless Toxic Attraction initiates another reign of terror. But Orlando erupts when Chance delivers the finishing 450 splash, gaining her duo the victory and titles.

Orlando sings “happy birthday” to North American Champion Carmelo Hayes, who is backed by “Trick Willy” Trick Williams. They issue an open challenge to the first competitor to enter the ring, and Giovanni Vinci makes his entrance. While posing for his usual snapshots, Vinci is beaten out by Nathan Frazer, who bolts right past.

Vinci joins commentary instead and argues with Vic Joseph about walking too slowly. Speaking of bolts, young Frazer is like lightning in-ring, and the agile Hayes is neck and neck. Wade Barrett compares Frazer to a freshman on campus in NXT, although he takes it to the champion, diving into Hayes ringside while inadvertently spilling Vinci’s drink. “John, my diet soda!” Meanwhile, Williams distracts the referee, Vinci pushes Frazer off the turnbuckle, and Hayes delivers his beautiful top-rope leg drop for victory.

In-ring, Wade Barrett conducts a sit-down with JD McDonagh and NXT Champion Bron Breakker. Irish Patrick Bateman and Steiner Junior trade average words of confidence before the challenger literally signs the contract with his own blood.

Toxic Attraction is infuriated backstage after losing tonight’s opening bout – on the floor throwing a tantrum as some would say.

Treated like a middle child, Sarray’s transformation entrance and much of the match happens in picture-in-picture. The broadcast returns to a crossbody fail, and from there, the momentum is gone. Nothing has clicked for Sarray in her year-long tenure in NXT, and frankly, it’s time to accept this run as a sunken cost. Finally, Rose puts it away with a running knee but grabs a steel chair from ringside. As the referee helplessly flails his arms in disapproval, challenger Zoey Stark makes the save.

A vignette for Tiffany Stratton highlights her gymnastics skills. “Everything I do is pretty,” she says, sending a message to rival Wendy Choo.

Backstage, the masked man Axiom is interrupted and towered over by Hudson. “You’re a nerd,” he remarks, and a brawl commences towards the ring where Hudson gets the upper hand: “And that, ladies and gentleman, is why you don’t believe in your heroes!” But the underdog wants a fight, so the bell officially rings. After taking Hudson’s offense, Axiom reverses a Razor’s Edge to gain the roll-up victory.

Joaquin Wilde, Cruz Del Toro, and Elektra Lopez back The Family while Damon Kemp corners Diamond Mine. Roderick Strong isn’t present and probably doesn’t want to be. Tank tops take over singlets throughout picture-in-picture, and The Family begins targeting Brutus Creed’s left hand. Julius Creed makes the comeback, and while Brutus clobbers Lorenzo, D’Angelo attempts to grab his crowbar. But the crowd pops when Santos Escobar returns, hitting D’Angelo with brass knuckles (that he wore without a problem), allowing the Creeds to capitalize for victory.

Roxanne Perez explains her feelings over Cora Jade’s turn. “Let’s settle this once and for all,” although this feud has existed for about three weeks. Jade’s response is interrupted by Mandy Rose, who asks her to take out challenger Zoey Stark.

Gacy is accompanied by The Dyad while Jensen has Josh Briggs and Fallon Henley. Jensen is wearing jorts – but not in the cool John Cena way, rather the post-ironic Southerner way. “We have Bray Wyatt at home,” Shawn Michaels insists as Gacy creepily delivers a Uranage. As the cornermen argue ringside, Pretty Deadly causes a distraction that allows Gacy to capitalize with a finishing lariat for three. He sends a message to Cameron Grimes, who is watching the monitors with others backstage.

Parallel to the previous women’s match, a main-roster ready competitor faces someone who isn’t ready for NXT, getting an entrance that starts in picture-in-picture. Meanwhile, commentary points out a breaking news tweet from Roderick Strong, who tells Apollo Crews to stay out of the Diamond Dojo. That match will slap. Legend attempts to utilize Fyre’s baseball bat, but the latter ducks, delivers the Gory Bomb, and Swantons to victory. Fyre would be a cool addition to Clash at the Castle later next month!

Carmelo Hayes and Trick Williams are in the parking lot, where they attempt to help three girls jumpstart their car. Not all heroes wear capes.

Nikkita Lyons responds to Kiana James’ slideshow presentation about her lack of clothing and vocabulary. Lyons issues an in-ring challenge for next week.

Tonight’s hoss-fight main event features two of NXT 2.0’s homegrowns and definite WWE superstars of the future. Mr. Stone is there too, presumably giving moral support to Wagner, who introduces steel chairs and steps into the ring. Sikoa finally turns the tide by delivering a Samoan Drop into the announce desk, and the fight heads into the parking lot. He hilariously pushes Carmelo Hayes, who is still chatting with the shorties, into the car before continuing his brawl with Wagner. “He’s the street chump!” Stone says after Wagner throws Sikoa into a WWE-branded dumpster. NXT’s multiverse continues to collide as Sikoa inadvertently takes out Cameron Grimes, who is just minding his business. “Street Champ” makes a comeback with multiple steel chair shots and a Uranage into the steps for two. Stone is headbutted by Sikoa, who positions Wagner onto the announce desk and delivers a finishing Samoan Drop for three.

I’m on that Von Wagner pack for real. Others may not agree, but I think this caveman has a big future in WWE, and obviously so does The Bloodline’s Solo Sikoa. The remainder of the card was your average Tuesday night but nevertheless pretty enjoyable.