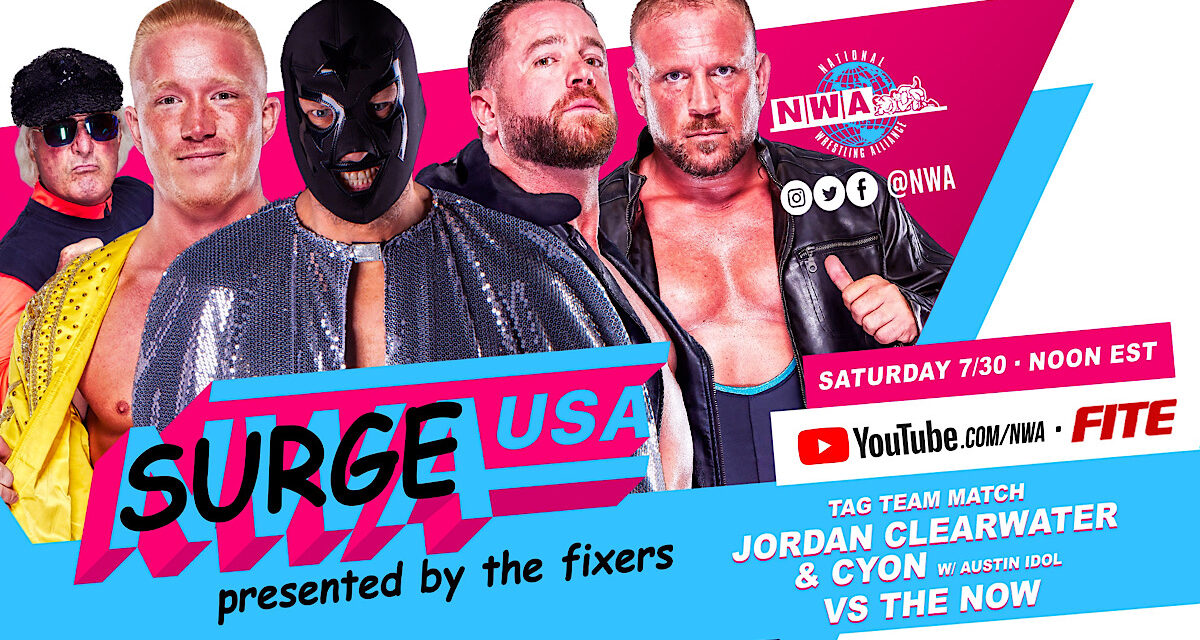 On a special episode of NWA USA, the National Wrestling Alliance deems it a good idea to have The Fixers present the show, in what is being billed as “Surge USA.”  Folks, just accept that it’s happening, the jokes are coming, with some wrestling.

We start with Wrecking BallLegursky, but no Jay Bradley.  Legursky mentions that The Boss is laid up with the “elephant-phitis” and he’s with “Mercado” (that’s Mercurio, by the way), and he digs Australian accents. Ha!  Okay, that made me crack up.

So we send it to the ring at the Skyway Studios in Nashville, TN.  Joe Galli, Tim Storm, and Velvet Sky have the call, and this is the First Match of this Surge USA… 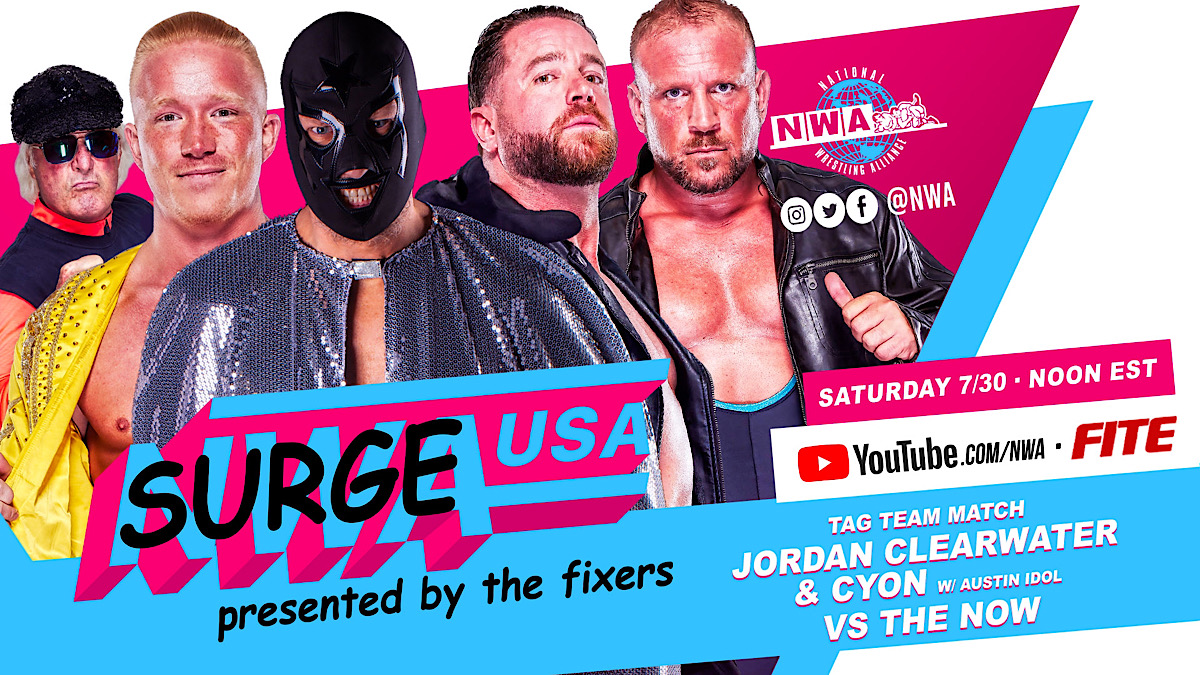 Clearwater and Dalishus wrestle, and he gets an early advantage over The Golden Boy.  He tags to Cyon, and fans light up with “Who’s your Daddy?” chants.  However the joking stops as he brings the fight to Dalishus.  He tags back to Clearwater and The Now isolate him in their corner with an elbow drop/knees-to-back combo.  Collins hit the ropes, and Cyon attacks from behind. Collins looks back and that gives Clearwater the opening to attack from behind, and now IdolMania is in control.  Cyon just whips Collins around to the ring corners, and he is Now in Peril.  Collins gets a desperation enzugiri to a Cyon, crawls to his corner for the hot tag to Dalishus, and he is Now En Fuego, clearing house.  He goes to his corner, but Cyon knocks off Collins before a tag can be made.  Clearwater levels with the Midas Touch finisher and secures the pin and the win.

Your Winners via Pinfall:  Jordan Clearwater and Cyon

Legursky and Mercurio are now with Velvet Sky and Angelina Love. Legursky asks the hard-hitting question on everyone’s mind, “Why beautiful people?”

(Hey!  Even I would be tongue-tied, and I’m a professional!)

Mercurio pushes Legursky aside and asks what restaurant they like…but not a fancy one. Love looks at Mercurio like he grew a second head. Sky mentions Ruth’s Chris Steakhouse (what?!  C’mon!!), but Legursky suggests Olive Garden, because when you’re here…you’re family. The Beautiful People go, “Yayyy…I think?”

Pierce was last seen on PowerrrTrip and this is his debut on NWA USA. Buffshay is still rising as “The Quad Daddy” of the NWA, and I will never get used to hearing that.

Your Winner via Pinfall:  Brady Pierce

Legursky and Mercurio is now with The Freeman Brothers, and the short jokes keep a-coming for Rush’s “big brother.”

This was a small segment that does little, but the jokes were a wee bit off. Rush’s big brother is tired of the jokes, and I’m a tiny bit tired of this short bit, anyway.

Thenkyew, I’m here all week!  Tip you wait staff, and try the nachos!

So let’s head to a fatal four way match with… 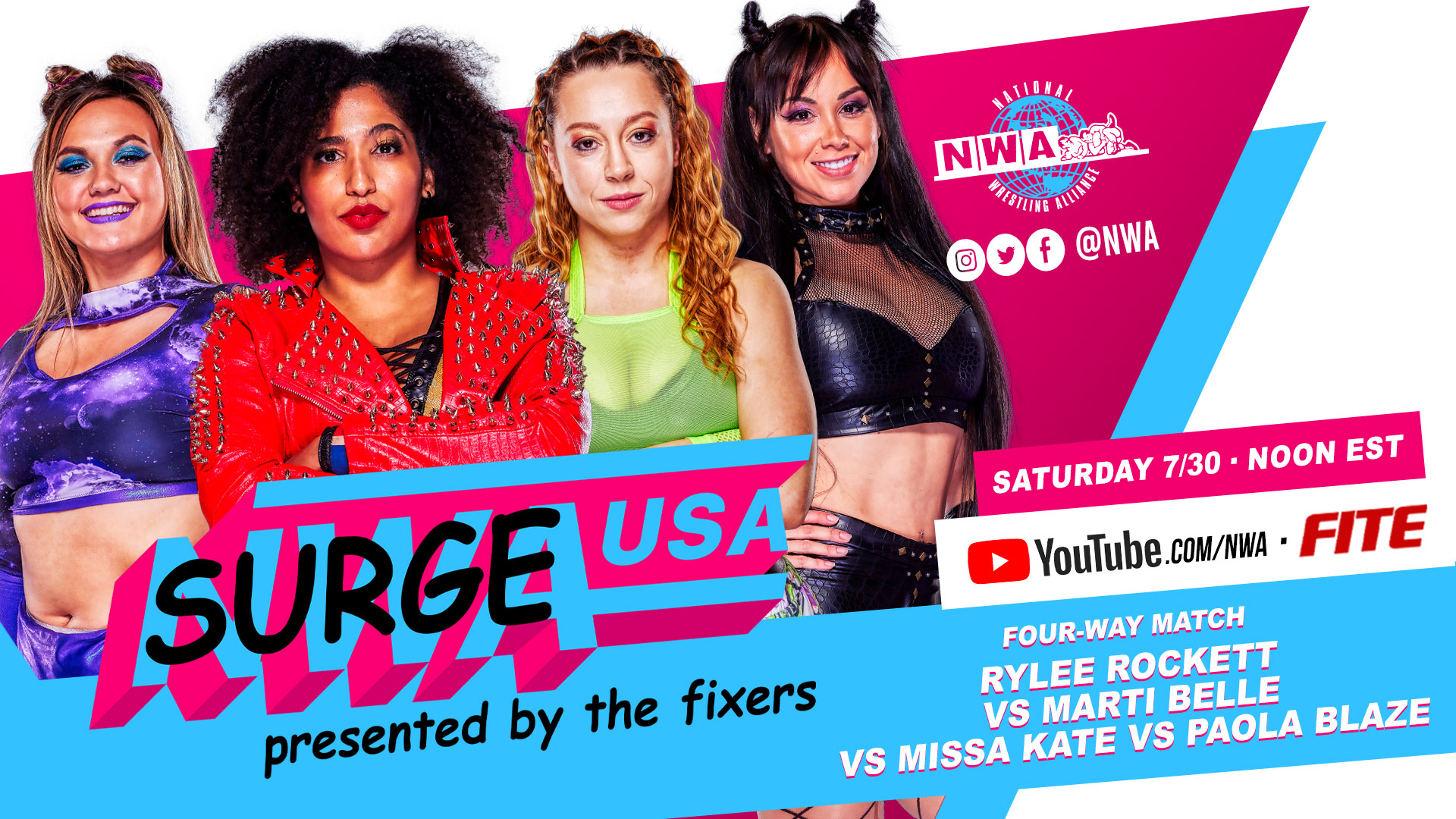 Marti Belle vs. Rylee vs. Missa Kate vs. Paola Blaze

Blaze ducks out, and it’s a three-way for a minute as Belle and Rylee get rid of Kate.  They go outside and take it to Blaze, and then Rylee and Belle go to work with a handshake, and Rylee tries a roll-up for a two count.  Blaze trips up Belle and takes her out of the ring, and now Kate is back in and rolls snake eyes to Rylee on the top turnbuckle.  Blaze and Kate team up and go to town Rylee. Belle inserts back in and the action goes all over the place, with Blaze and Kate getting double pins on Belle, and Rylee, respectively, for a dual two count.  The end has Rylee nailing Blaze with a springboard facebuster, but Belle gets her and says “Lo ciento”, and delivers the Protect ya Neck finisher to lay her out for the win.

Your Winner via Pinfall:  Marti Belle

Back to Legursky and Mercurio, this time with Taryn Terrell and Natalya Markova. Once again, Legursky has got a deep, thoughtful question for them…why aren’t they called The Beautiful People?

Author’s Note:  Say what you will, but I’ll take this over *any* backstage interview done by WWE.  Also, yes my expectations are super low.  why do you ask?)

But it’s time for the Main Event and we have… 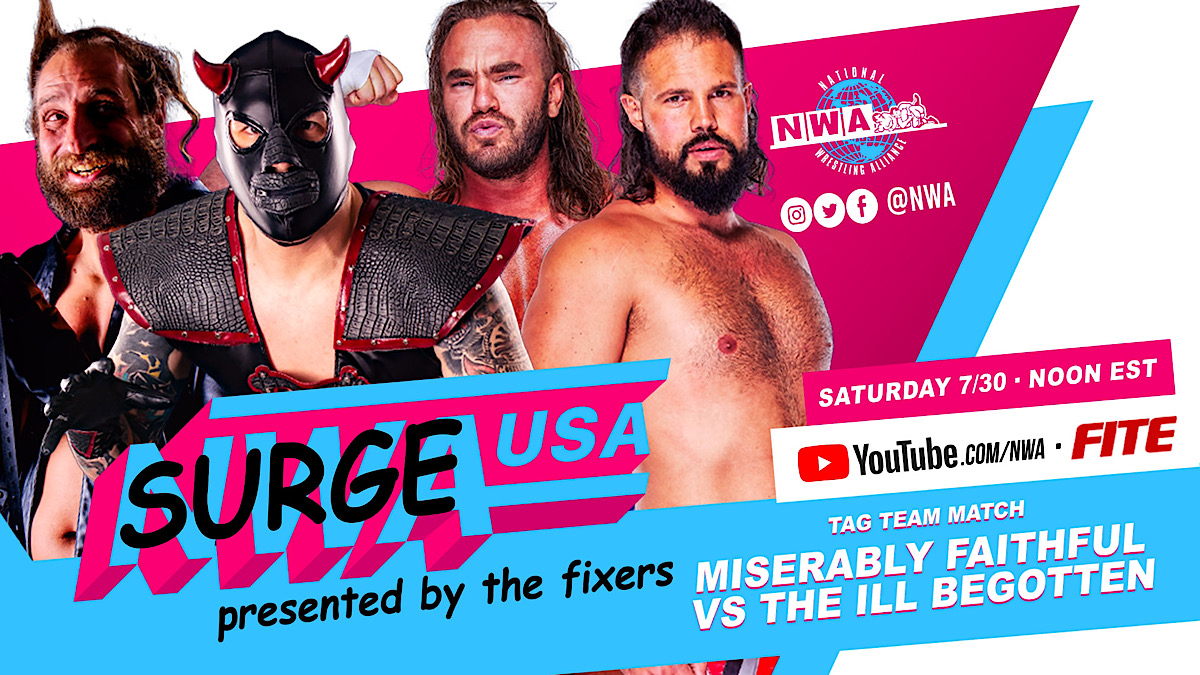 The Miserably Faithful (Sal The Pal and Gaagz The Gymp, with Judias ) vs. The ILL Begotten (Alex Taylor and Rush Freeman, with Jeremiah Plunkett)

So neither Father James Mitchell nor Danny Dealz are with their respective teams, but their stable mates are.  How this will play out is anybody’s guess.  Also, The Ill-Begotten switched up between Plunkett and Freeman this week, because Freebird Rules, I suppose.

Sal starts off with Taylor, but a quick tag to Gaagz, and Gymp-a-Mania™ is running wild.  Freeman tags in, and he uses his power to take down the Gymp.  They isolate him in the corner for more pain, and he is a Gymp in Peril (or in Paradise.  He loves pain, after all).

Taylor sends Gymp to the ropes for a dropkick that misses.  Gymp comes back and gets a desperation double ax handle, and crawls to his corner.  A hot tag to Sal, and he is Miserably en Fuego against The Ill-Begotten, and the punt to Taylor is good for the extra point, and he covers for a two count.  Tag back to the Gymp, and they get an atomic drop/ face to the knee combo, and Gymp hits Sliced Bread #2.  That should be it, but he tags Sal back, and he gets the one, two, and three.

Your Winners via Pinfall:  The Miserably Faithful

Surge USA is over and rolls to credits.  You should watch the credits because Fixers Rule!

The stars are for the solid matches on this NWA USA show.  The segments with Legursky were good, but you can tell he was missing Jay Bradley (and good luck with that “elephant-phtis”, Boss.  There’s a cream for that somewhere).  Mercurio (or Mercado, or Menudo, or whatever) was game and was a good straight man for the most part, even if he was channeling “oily bo-hunk.”