Slobberknockers and street fights rule the night on this AEW Rampage 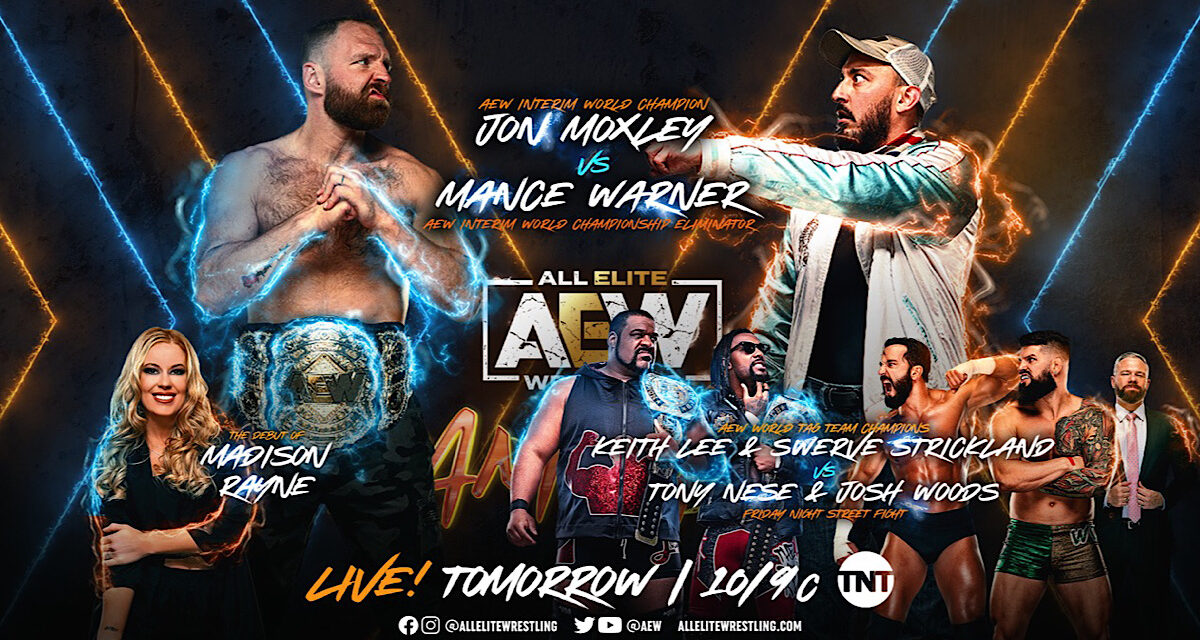 It’s Friday night, and you know what that means?  No, Not to see Ric Flair’s Last Match (you missed it) nor to welcome Doomsday (tick tock).  It’s time for AEW Rampage, and this show has something for everyone, including a street fight for the AEW Tag Team titles between Swerve In Our Glory and Tony Nese and Josh Woods.

From the Van Anel Arena in Grand Rapid, MI. Excalibur, Tony Schiavone, and “Good ol’ JR” Jim Ross have the call, and William Regal is at commentary because here is your First Match between… 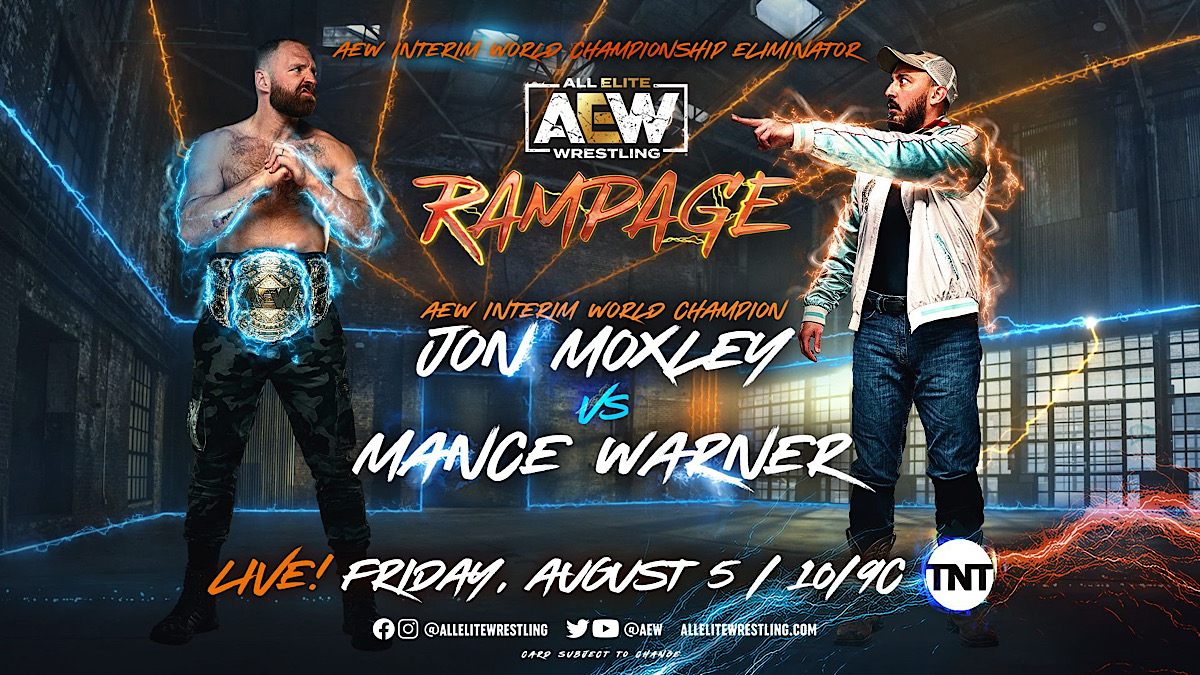 If this is your first time seeing Warner, he is mostly wrestled in Major League Wrestling in some bloody and violent matches.  Warner won a Bunkhouse Battle Royale, and if he wins tonight, he is in line for a shot at the top title.

As Warner comes down the ramp, Mox comes out and takes it straight away to the Southern Psychopath.  Yeah, forget finesse; this is a brawl ( a slobberknocker, if you weeel). Mox snap suplexes Warner to a chair that bends it back, all the way, but Warner has a high threshold of pain and manages to get back up and he crotches the champ on the guardrails and clotheslines him off it.

Back in the ring, Warner takes it to the champ with some haymakers.  As Warner chops away in the corner, Mox averts and gets his knee wrapped on the ropes.  He kicks it, then transitions to a figure four (Woo!) to snap some ligaments.

Warner and Mox go back out of the ring to brawl some more with steel steps, guardrails, and chairs (oh, my!), Now Warner goes for a figure four, but Mox blocks the submission and gets a high knee that sends both men back outside. Mox tries a suplex on the steel steps, but Warner reverses to a DDT, and oh the champ is feeling it.  During Picture in Picture, Warner is in full control and locks in the figure four but Mox punches his way out and escapes the submission.  Warner smells blood in the water and chop blocks the leg and then stomps hard on the ankle to further incapacitate Mox.  Warner lands with a spinebuster for a two count, and now chairs enter the ring.  As the ref tries to control the Southern Psychopath (Ha!), Mox uses a forearm to clock him with the chair, but he gets the worst of it.  Mox dives out to Warner, who’s bleeding profusely, and he kicks into high gear with a superplex and then hammer and anvil elbows rain down on his head.  Mox bites his head, but Warner connects with a lariat that levels both men.  Mox locks in a Kimura, and then switches to stomps and then a Piledriver.

.@JonMoxley may not be the one wearing the cowboy boots, but that's still gotta hurt 😬 #AEWRampage pic.twitter.com/ioH1qYBsdo

Then he cinches the bulldog choke, and Warner is out. With that, Regal says, “Thank you and good night.”

We go to an interview last Wednesday, as Lexy Nair interviewed Ricky Starks after he got jumped by Powerhouse Hobbs. Before he responds, The Factory offers protection but Starks refuses. Before they rush him, QT Marshall says to hold off because they’ll get him yet.

OK, I have to believe this happened because AEW DARK Elevation didn’t have enough space.  But, yeah, this deserves a Haiku Recap.

Gets hurt with a Driving Knee.

Bye, Not Quite Ziggler

Your Winner via Pinfall:  Konosuke Takeshita

We go to another interview Lexy Nair had from AEW Dynamite, as she caught up with The Best Friends and Orange Cassidy in the medical facility.  Cassidy was banged up after his match with Lethal, and they’re not doing well in singles action or tag team action, notes Chuck Taylor and Trent Beretta… so maybe trios action is what they should focus on with the new Trios tournament coming up.  They agree to that new partnership…including Dr. Danhausen.  Ummm, what?

But let’s go ringside for the debut of…

Since joining AEW, The Baddies don’t care for Rayne so this might be the first wave of the beatings to come for the new coach.  This is mostly an exhibition and Rayne shows no signs of ring rust, and she outwrestles Grey with a series of near falls.  At one point Hathaway distracts Rayne by stomping on the steel steps.  As she pauses to figure out what is going on, Grey kicks her out to the floor.  During Picture in Picture, Grey adds the assault with a suplex onto the floor, followed but throwing Rayne into the guardrails.  Grey tries to pin but can’t seem to put Rayne away, and then…

Ads (Yeah, I’m gonna let this slide this one time.)

Back to the match and Grey is getting trounced by a fired-up Rayne. She nails a beautiful Northern Lights suplex with a bridge for a two count on Grey.  Grey counters with a sitout slam but only gets a two count, and she is becoming more frustrated she can’t put away the veteran.  The end comes when Rayne lands with a sliding clothesline, followed by CrossRaynes (think CrossRhodes, only…Rayne) and she covers to get the win.

Your Winner via Pinfall:  Madison Rayne

After the match, the AEW TBS Champion Jade Cargill comes out on the mic and says good help is hard to find and she needs to handle this on her own. After introductions are made (with Cargill noting she is That B****), she invites Rayne next week on AEW Dynamite to show up and show out and get her @$$ beat. Rayne is all for it.  But, while Cargill was talking, Kiera Hogan tries to sneak up and attack Rayne, only to get a CrossRaynes for her trouble to send a message to the Head Baddie.

Mark Henry is with both Tag Teams and Sterling gets into why this street fight favors his clients. Swerve says what we’re all thinking to Sterling: shut up. Lee says there’s nothing smart about asking for a street fight with the two of them.

It's Time for the MAIN EVENT!
Friday night Street Fight: Swerve In Our Glory vs Tony Nese and Josh "the Goods" Woods w/ Mark Sterling

Looks like there’s been enough talk, Says Henry, because it’s time for the Main Event.  But it’s gonna be a… 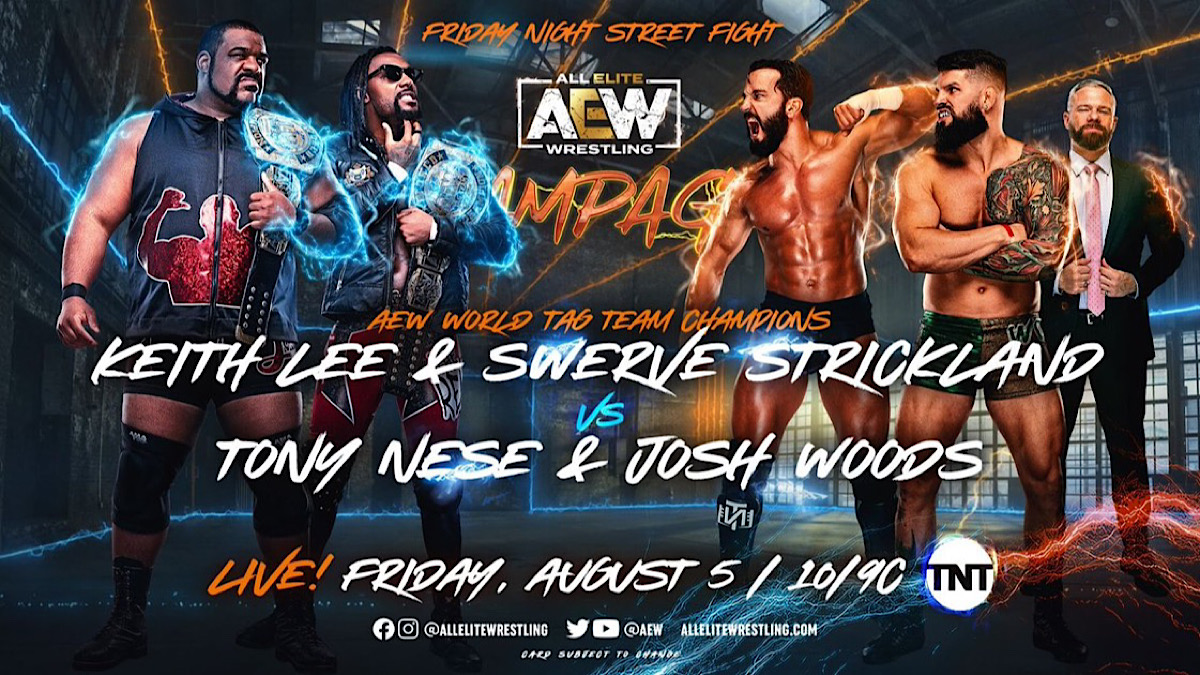 Again there is nothing scientific in this match; just straight-up violence.  As Strickland and Lee walk with purpose to the ring, it already becomes a Pier Four brawl.  At one point, Nese nails Lee with some protein powder (hey!  supplements are important) blinding him in the process.  Strickland doesn’t care for that stuff and kicks it in Nese’s face.  Now things get nasty as Strickland throws a toolbox at Woods and it barely misses his head.  Lee is still incapacitated and gets some fans’ water at ringside to wash his eyes out.  Meanwhile, Woods gets Strickland with a corkscrew suplex on the steel steps with a sickening thud.

Inside the ring in Picture in Picture, Nese gets garbage cans in play, slamming Strickland hard on the steel.  Nese whips Strickland hard to garbage can set up in the corner, and follows with a suplex to a garbage can lid.  Lee has been neutralized for much of this match, as he gets nailed by Nese and Woods with a garbage can on the outside of the ring.  Nese and Woods try to double team Strickland on two tables set outside the ring, but he keeps fighting them off.  Lee takes Woods off the mat, and Strickland attempts with a sunset flip to Nese, but he flips over and lands a basement super kick to cover, but Lee gets in and breaks the count.  Now The Limitless One is in the ring and Lee cleans the house.  Lee goes to hit the ropes, and Sterling nails a chair shot, and the fans rightly chant, “You f***ed up!”  As Lee turns to the knockoff Saul Goodman, Nese, and Woods double team with a double DDT to Lee on a steel chair to cover.  But Strickland goes up the top turnbuckle and lands a 450 splash on a pile of humanity.

Swerve with the 450 Splash right onto the pile of bodies here on #AEWRampage LIVE on TNT! pic.twitter.com/FeXFgBmXUV

As Strickland calls for Who’s House, Sterling comes from behind and hits his head with a steel pipe.  As they set him up on a table, Lee comes back in the ring and he clears out Nese and Woods.  Sterling, for whatever ungodly reason, goes up top to deliver a splash for the team.   Strickland manages to roll off the table, but that puts him in prime position for Lee to push him off and land on the table.  Woods gets behind Lee and he tries a German Suplex from the ring apron to the tables set outside, but to no avail. One kick by Nese to Lee’s mush, and now both men crash into the double tables to the fans’ delight.  Nese loads up with more weaponry into the ring, but Strickland body drops The Premier Athlete on all the steel.  That puts him in a perfect position for Strickland to deliver the Swerve Stomp and he covers for the one, two, and three.

Your Winner via Pinfall, And Still AEW Tag Team Champions:  Swerve In Our Glory

Lee and Strickland celebrate their hard-fought win as the show fades to black.

Overall a solid show.  Warner had a nice showing against Moxley, and Lee/Strickland and Nese/Woods made a case for a great main event that was full of mayhem.  Rayne looked good in her AEW debut and it’ll be interesting how she holds her own against Jade Cargill.

For now, See you for Battle of the Belts III.