Ricky Morton comes in the NWA USA like a “Wrecking Ball” 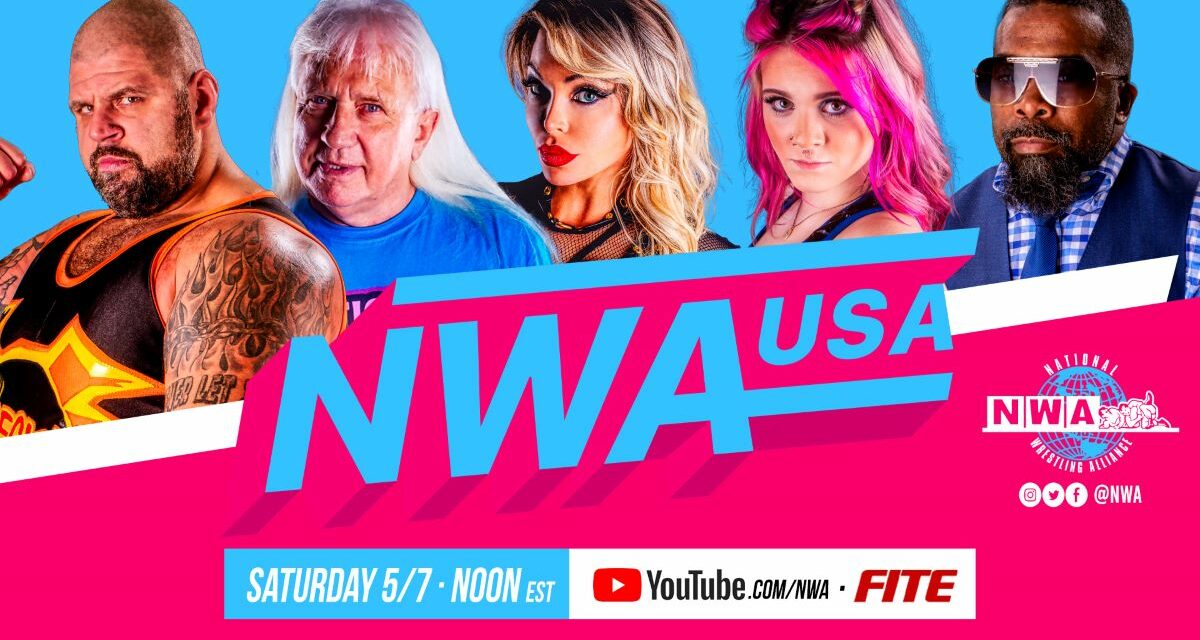 Apologies for the Miley Cyrus earworm headline, but it seems apt as this week, The Rock n’ Roller goes against “Wrecking Ball” Legursky for a chance to face Colby Corino at a later time.  But Does Ricky Morton have a chance against the behemoth, or are his chances Fixed?  We’ll find out on this NWA USA in the main event.

We start with a cold open, as May Valentine is with the NWA Women’s champion, Kamille, and her man Thom Latimer.  Valentine addresses the Brickhouse’s claim of there being a lack of competition, and Kamille doesn’t care about what people think.  Whoever Billy Corgan brings in, they won’t be enough to stop her, and she promises to be a one-time champion. Valentine then asks Latimer about his declaration to get a shot at the NWA National title belt. As he starts to speak, Kamille cuts him off and says it’s his time to shoot for the top.

Ain’t it cute when couples finish each other’s sentences?

Time to head to the Skyway Studios, where Joe Galli and Velvet Sky are at commentary, and it’s time for the First Match of the Saturday Show. 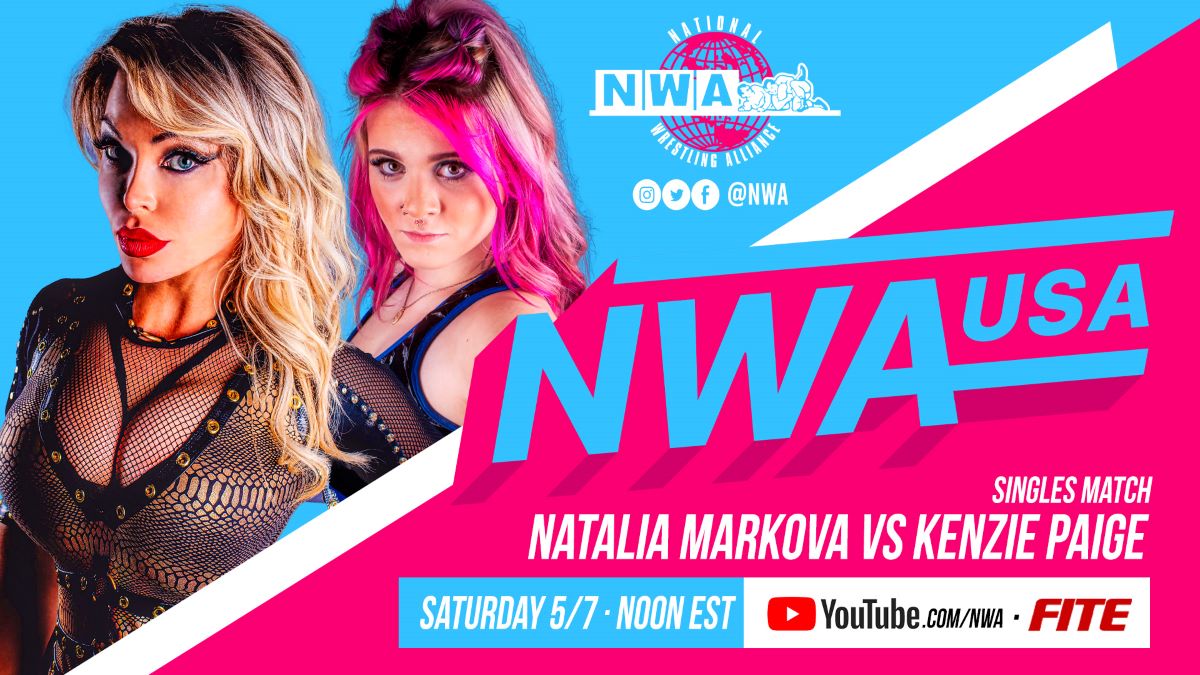 So, Markova is still “The Crush,” (thanks geopolitical upheaval!), but Paige is “Pretty Empowered,” and eager to continue this fierce rivalry.  Once the bell rings, Markova knocks Paige down with fists, but she gets back up ready for a fight.  Markova gets a front face slam and lights up Paige with kicks, then a neckbreaker to a pin cover but Paige kicks out at two.  Paige stomps her toes and chops at her chest, then goes for a sunset flip to a roundhouse kick, but that gets her a two count.

From there, we get “Yay/Boo” chops between Paige and Markova, but The Crush gets a Jazz Stinger for a two count, and then lands a running knee for another two count.  She goes up top, but Paige stops her and sends Markova crashing down with a slam from the top rope, and she gets another roundhouse kick but it’s another two count.  Markova goes for the Beautiful Disaster finisher, but Paige evades and rolls her up, but she over rotates, and Paige tries to fight out of the pin, but Markova escapes by the skin of her teeth as…

Your Winner via Pinfall:  Natalya Markova

Paige is upset by another loss, as Markova is happy she pulled out another win.  Better luck next time!

May Valentine is backstage with Kerry Morton, asking if he’s worried about his dad in the main event. Kerry admits he is concerned about, since Ricky is stepping in the ring with a 300-pound man.  Kerry says as much as he hates to say it, he would rather step in to take his dad’s place.

Kyle Davis at the Podium with BLK Jeez, and he “appreciates” the love Nashville is showing him (feel the sarcasm dripping, folks!).  Anyway, Jeez says growing up, he always idolized Homicide, and wonders what it would be like to step in the ring with him.  Jeez gives props to Homicide and says he’s a great fighter, but his time is ticking and there needs to be a new NWA Junior Heavyweight champion, and that is the Church’s Money.  Challenge laid down; we’ll have to see what The Notorious Legend will say.

On another Shoot Segment in Sixty Seconds™, it’s time for the Dane Event himself, Jax Dane:

“Who is Jax Dane? Well, let’s start with the current NWA National champion. And then let’s just throw in there, we might as well, the former world champion, former World Tag Team Champion, the former North American champion, the king of Bakewell, Tennessee…I could go on for days, but we don’t have time. We only got sixty seconds.

Galli recaps why we have the main event on this show, and there’s speculation on Morton can beat the Fixer himself.  Time to find out as we head to the Main Event with… 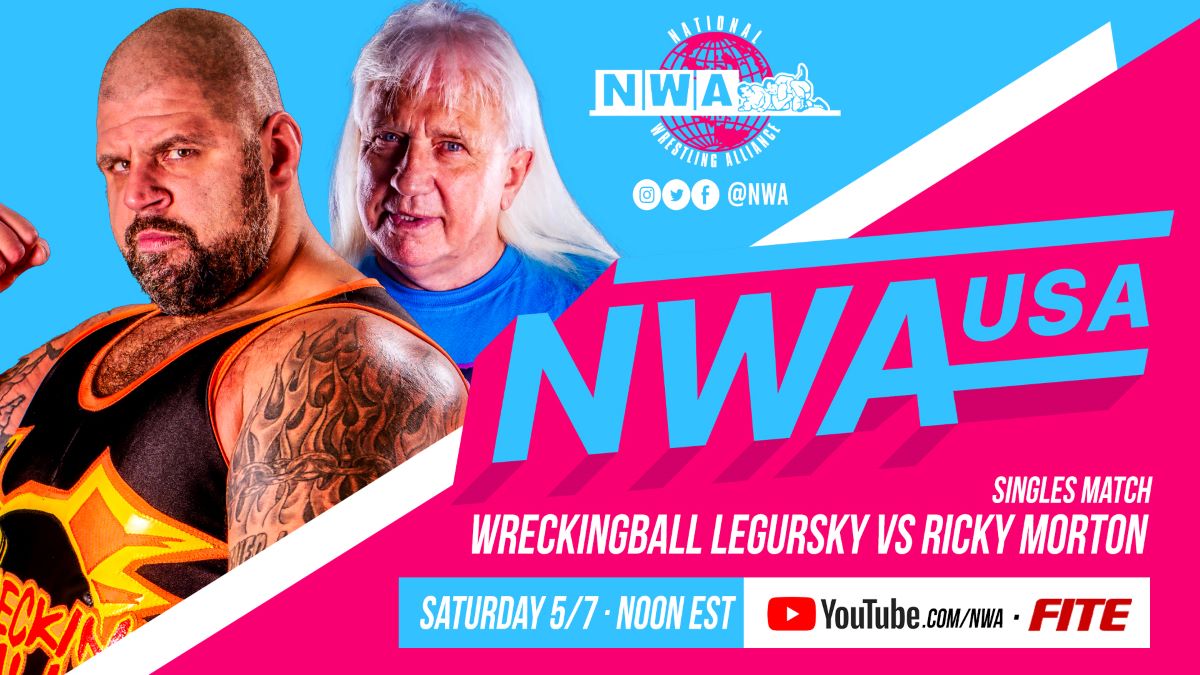 Early in the match Morton knows he’s dealing with an immovable object in Legursky, but a thumb to the eye gets some offense going for the wily veteran.  However, it is short-lived as Legursky gets Morton in a bear hug and slams him into the corner turnbuckles and this Fixer rules the ring.  Back to the center of the ring Legursky gets Morton in a bear hug to squeeze the air out, but the Rock n’ Roller twists his ears to break the hold, but “Wrecking Ball” slams him back to mat and follows with a diving headbutt that would make Harley Race proud.

Legursky goes back to the bear hug, and Kerry Morton comes out to cheer his dad on, and now Legursky releases to see the young man at ringside.  Ricky rolls out and as Kerry checks on his dad, Legursky’s charges at the youngster.  Kerry sidesteps and Legursky hits the ring post.  But soon, Jay Bradley comes out to knock down the younger Morton, and Ricky is sent back to the ring.  Legursky goes for a corner splash, but Ricky evades.   He goes for some offense but Legursky powerbombs the veteran Morton and easily gets the one, two, and three.

As Kerry gets in the ring to look over Ricky, both Legursky and Bardley stand tall amidst boos from the crowd because, well…Fixers Rule!

More heavy on the promotions than on the action, but the two matches drove home a great rivalry in Markova/Paige, and furthered a storyline with Ricky Morton trying to get his hands on Colby Corino, with The Fixers doing his bidding.  As for the interviews/promos, all in all a sold show.