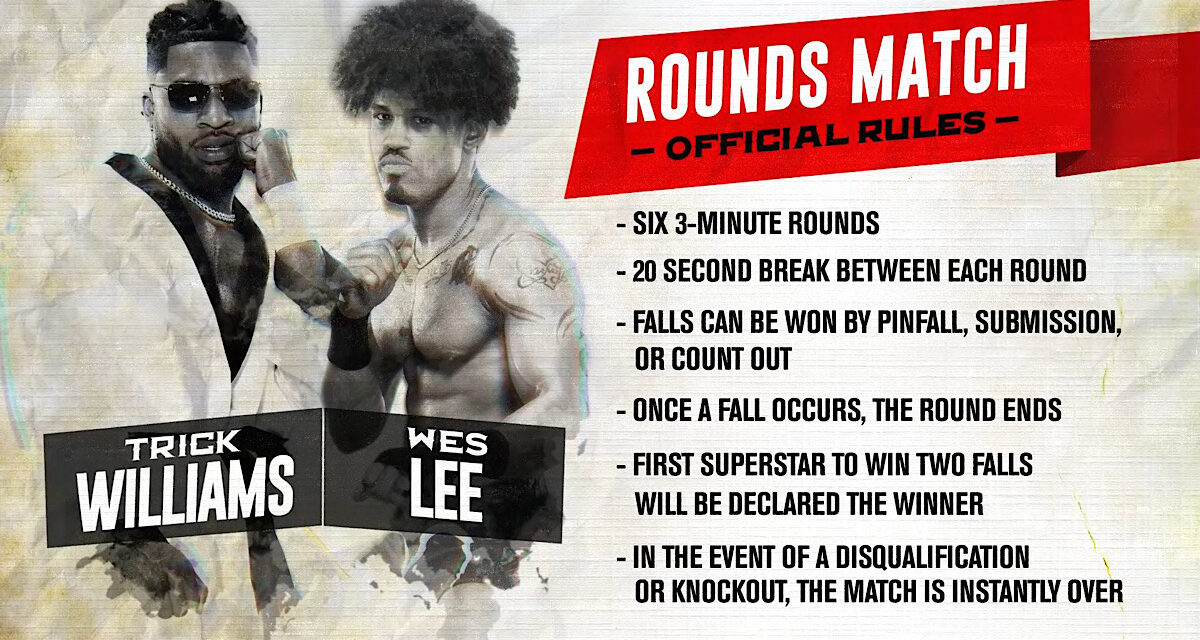 Considering the main roster’s recent creative shakeup, the outlook for NXT call-ups has improved greatly. Now, it’s NXT itself that prospects should be wary of. Tonight’s episode of NXT featured the brand’s habitually ridiculous segments with a Rounds Match that will surely go down in infamy.

Genuinely one of the fastest rising wrestlers in NXT is Lyons, who is teaming with Zoey Stark in the WWE Women’s Tag Team Championship tournament. They have no similarities besides hair color, but in a pre-taped interview, they explain their partnership over a huge opportunity. Meanwhile, James targets her opponent’s injured knee until Lyons makes an awkward comeback with a missed senton and kip-up. But the viral split-legged cover gives Lyons the victory heading into her main roster debut. James comes from behind with her accounting briefcase, standing tall anyway.

Apollo Crews is watching tape with the Creed Brothers, which upsets Diamond Mine leader Roderick Strong. He claims his absence last week was a test and ultimately challenges Crews to a match tonight.

Lash Legend is on the phone talking about reservations before approaching Malik Blade. The segment fades out to Wade Barrett’s dismay: “I wanted to hear what Lash had to say!”

“The rules of the match are as follows: there are six three-minute rounds with a 20-second break between each round. Falls can be won by pinfall, submission, or count-out. Once a fall occurs, the round ends. The match ends when one superstar has won two falls. In the event of a disqualification or knockout, the match is instantly over.” Lee and “Trick Willy” don boxing gloves as the Tale of the Tape gives advantage to the latter.

Williams does his best Muhammad Ali impression, but the actual striking is worse than the Youtuber goons fed to Jake Paul. “This sucks” chants ring aloud before Williams is saved by the bell in round one. The gloves come off, and a wrestling match begins to the agile Lee’s favor until Carmelo Hayes interferes ringside; Williams delivers a big boot for the first pinfall. Round three is even in picture-in-picture, and afterwards, Lee gains a pinfall victory in round four preceding a cheapshot knockout from his opponent. “The air is lifted out of the arena” commentary tries to cover in round five, where Lee scores a pinfall victory with a knockout blow to finish the first and hopefully last Rounds Match in NXT history. Bless his heart, but “Trick Willy” can evidently neither box nor wrestle.

Andre Chase is speaking to Arianna Grace, who sports a black eye thanks to the inadvertent ball handling of Thea Hail. The accident happened on Chase University grounds, meaning Chase decides to settle this in-ring.

North American Champion Carmelo Hayes gets on the microphone to talk smack on Nathan Frazer. The latter’s music plays, but from behind appears Giovanni Vinci, who challenges Hayes to a match at Heat Wave next week. “I will put you on a t-shirt, and it won’t be designer,” spits Hayes before a pull-apart showdown commences.

Speaking of Heat Wave, a hype package previews the main event between JD McDonagh and NXT Champion Bron Breakker. Irish Patrick Bateman and Steiner Junior is definitely one of NXT’s feuds ever.

Lash Legend is back talking to Malik Blade when Edris Enofe appears to listen to her ramblings as well. The segment fades once again, which upsets Wade Barrett.

Cameras zoom in on Apollo Crews’ eye, which shows a mysterious image of Diamond Mine suffering in-ring. Crews shakes it off, clearly confused. Yeah, Vince McMahon stepped down from WWE; he took his bad writing to South Beach in NXT.

After winning last week’s Street Fight, Solo Sikoa is told he has a sprained PCL. He’s approached by Cameron Grimes, and Sikoa shoots his shot at the North American Championship “for guys like me and you.” Grimes doesn’t like that…

On paper, this is a barnburner. But in the periphery is ongoing Diamond Mine drama and whatever superpower Crews is discovering for himself. Strong gains control with his technical chops and literal chops, but the competitors take each other out preceding commercial. Crews makes his signature comeback with multiple Germans thereafter, but Strong recuperates with an apron back bodyslam. They trade big maneuvers as Crews’ incredible strength is on display, finally putting Strong away with a slam for three.

Lash Legend is still talking to Malik Blade and Edris Enofe when Pretty Deadly walk in. “After listening to Lash’s voice for an hour, I got some pent-up aggression!” says Blade.

Diamond Mine is watching tape before Roderick Strong storms in. He smashes the computer and blames Apollo Crews for Diamond Mine’s problems, although Julius Creed notices something that cost them the match against The Family.

Shot like a movie, “one final accord” between Tony D’Angelo and Santos Escobar occurs at a darkened park. Sitting across a table, they discuss Legado del Fantasma and The Family. Escobar offers a match at Heat Wave, where if he loses, he’ll leave NXT forever. If he wins, Legado del Fantasma is free from D’Angelo rule. While this would’ve been opportune for Escobar and his crew to head towards the main roster, D’Angelo insists on keeping his “sheep” if he is victorious.

Tiffany Stratton enters her room, where Wendy Choo attacks her with night goggles. “This isn’t over,” Choo states over Stratton’s fallen body.

Enofe and Blade release their pent-up aggression over listening to Lash Legend speak for an hour. Out come the NXT UK Tag Team Champion Josh Briggs and Brooks Jensen to startle Pretty Deadly. Briggs attempts to take away an illegal chair from them, but he’s inadvertently taken out by Enofe. Pretty Deadly gains the victory, and ringside, Legend appears to take out Fallon Henley.

Cameron Grimes is bullied about running into a door last week before The Schism approaches from behind. “I’m going home,” mutters Grimes. “To who?” Joe Gacy questions. Being another scraggly white guy, Grimes fits in perfectly with The Schism; he should really consider joining.

Despite losing the NXT Women’s Tag Team Championships, Toxic Attraction’s weekly segments continue regardless. They deliver unconvincing voice overs to footage of them acting hard at a vinyl shop.

An enthusiastic Apollo Crews is interviewed backstage until Grayson Waller steps in. “On behalf of 2.0, you’re not welcome here,” says Waller before backing away from a fight.

NXT Women’s Champion Mandy Rose joins commentary, watching as mercenary Jade attempts to take out challenger Stark. The booth argues over Rose being the best women’s champion in NXT history, but remember, it’s quality over quantity, and Rose’s reign of terror is solely the latter. Jade retains control following picture-in-picture, grabs a foreign object, but runs into a German. The competitors exchange strikes, but Stark continues powering out of maneuvers such as Sliced Bread. Ringside, rival Roxanne Perez provides a distraction for Stark to capitalize on for the pinfall victory.

Perez attempts to attack Jade with her foreign object, chasing her towards the backstage area. Meanwhile, Rose tries cheapshotting Stark but inevitably falls into the challenger’s brutal-looking finisher to close the show.

That Rounds Match will be a memory of NXT 2.0 that people will look back on and say, “What the hell was that?” The remaining matches were standard NXT television, but of course, the episode wasn’t without its eye-rolling segments.