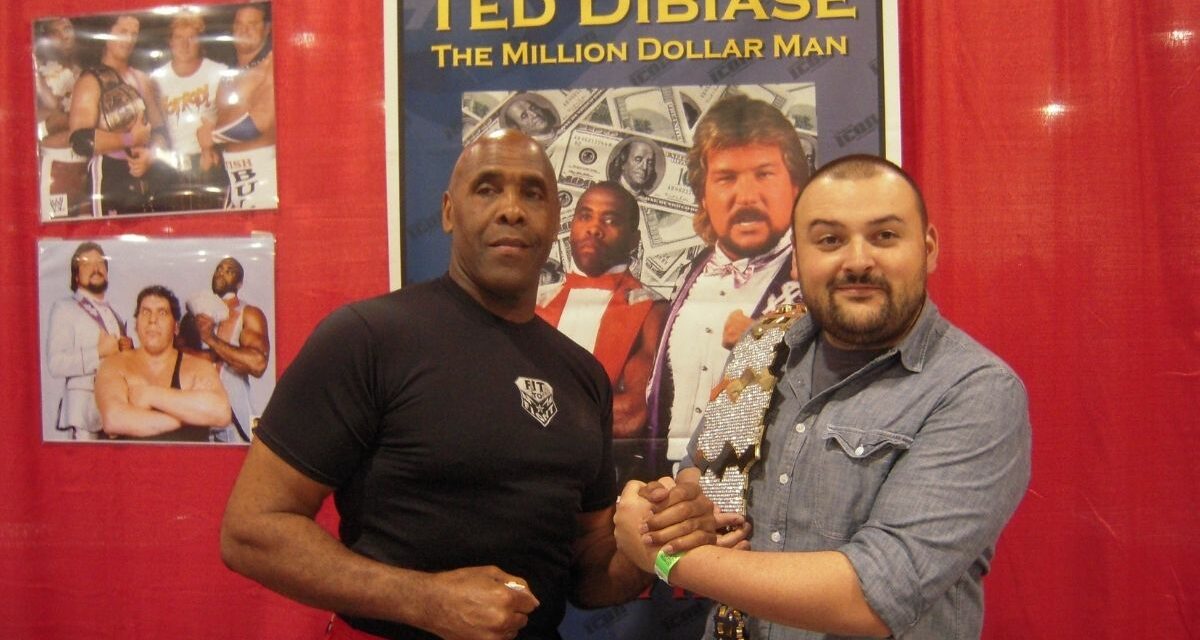 Virgil was the first professional wrestler I ever paid to meet. He was a guest at the Motor City Comic Con in May 2012, and I paid him to sign a glossy color copy of the cover of the January 1988 WWF Magazine featuring him and “The Million Dollar Man” Ted DiBiase, and then I took a picture with him, our fists interlocked, while I held the gold-plated, cubic zirconia encrusted Million Dollar Championship belt. I mentioned that I saw him wrestle live once, in my hometown of LaCrosse, Wisconsin, and he said, “LaCrosse, Wisconsin … Colder than a motherf******, right? I remember that sh*t,” and then we parted ways.

I met Virgil a second time a little less than one year later, in March 2013, at Heroes and Legends Wrestling in Fort Wayne, Indiana, my first independent wrestling show and fan convention since I became interested in pro wrestling again, as an adult. I did not give Virgil any money that day, even though he insisted — almost demanded — that I pay him to take a selfie with him or have him sign an autograph. Instead, I paid for meet and greets with Koko B. Ware and Colt Cabana, but I felt like I spent nearly as much time socializing with Virgil, wandering the fan convention, and lounging at the bar above the covered ice rink used for the venue, as I did with the friend who drove with me the 2 ½ hours to Fort Wayne. 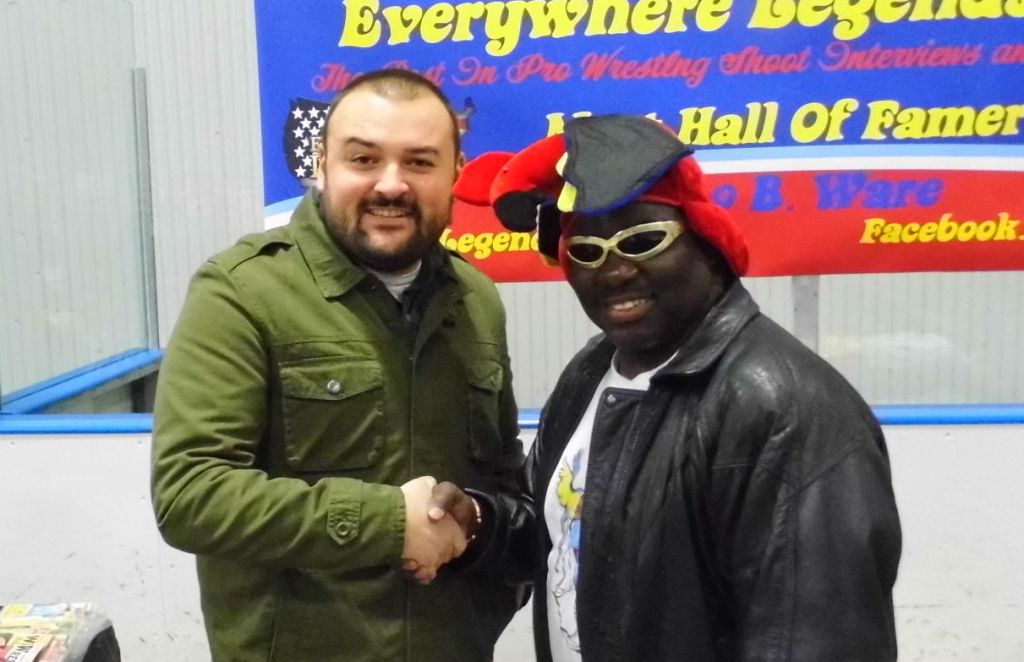 Josh Olsen and Koko B. Ware.

Neither of these times did I mention to Virgil that he was the first professional wrestler I ever shook hands with. I figured that might have been a little too personal and off-putting, and reserved that detail for myself. But it was true. Virgil was the first professional wrestler I ever touched. I was at a WWF house show with my brother and stepdad, and before Virgil made his way to the ring, in his red and white striped tights, my brother and I ran to the guard rail, like all of the kids did, like all of the kids still do, no matter who was making their entrance, and we leaned over so Virgil could slap our hand. And he did. Virgil slapped my hand, like he did with all the other kids I saw on TV. Virgil wasn’t the most popular wrestler on the card that night, and in the years since, Virgil has become known more as a punchline than a professional wrestler, but since he was the first professional wrestler to ever make contact with my hand, Virgil will always hold a very special place in my memory.

It annoys me that I don’t remember more about the wrestling shows I attended as a kid, and the memories I do recall barely feature the actual wrestling that took place. I remember Virgil slapping my hand, as previously mentioned, but other than that, my list of memories is short and vague. I have foggy memories of seeing Hulk Hogan and Andre the Giant. I remember seeing Nikolai Volkoff, the despised Russian heel, and I remember that as everyone in attendance at the LaCrosse Center aggressively chanted “USA, USA, USA,” I thought it would be funny to chant for the USSR instead, and my stepdad smacked the back of my head for doing so. I remember leaving events early so my stepdad could beat traffic. I think I went to at least two WWF shows with just my stepdad before my brother was old enough to come with us, but I never previously thought to ask my brother if he remembered anything about this. I haven’t spoken to my stepdad in nearly 25 years, so I wasn’t about to call him up and ask if he remembered taking me to see the WWF, so I decided one day, on the 10th anniversary of the death of “Macho Man” Randy Savage, to simply ask my brother if he remembered anything about going to watch wrestling with me, and I was pleasantly surprised by his reply.

“I remember seeing Virgil,” he immediately texted, and I thought it was quite funny that Virgil was the highlight of both of our nights. He said he also remembered getting a pair of Bret “The Hitman” Hart sunglasses from the merch stand, and I was immediately jealous, because I didn’t remember ever getting a souvenir, although I later recalled being allowed to buy a yellow and red Hulk Hogan foam finger. The fact that we both remembered Virgil was a solid detail though, because if nothing else it pinpointed a specific time in Virgil’s career. This was after his departure from the Million Dollar Man, his longtime in-ring “boss” and dehumanizer, after he turned babyface and went on a briefly successful singles run. Thanks to a website called The History of WWE, which archives the results of WWF/E shows, my brother identified that the house show we attended was on January 24, 1992. As far as my brother could find, that was the only WWF show at the LaCrosse Center where Virgil appeared as a singles wrestler after turning on DiBiase. It was a small victory, but I was so excited that he found this detail. I read the concise tally of results, and nothing felt familiar, aside from the appearance of Virgil, but I was convinced this had to be the show we attended. In January 1992, I would have been 12 years old, and my brother would have been 8, nearly 9. I would’ve still been a fan of wrestling, and specifically the WWF, but it would have been near the eventual decline in my interest, when my passion would have started to shift to baseball cards and other “real” sports. 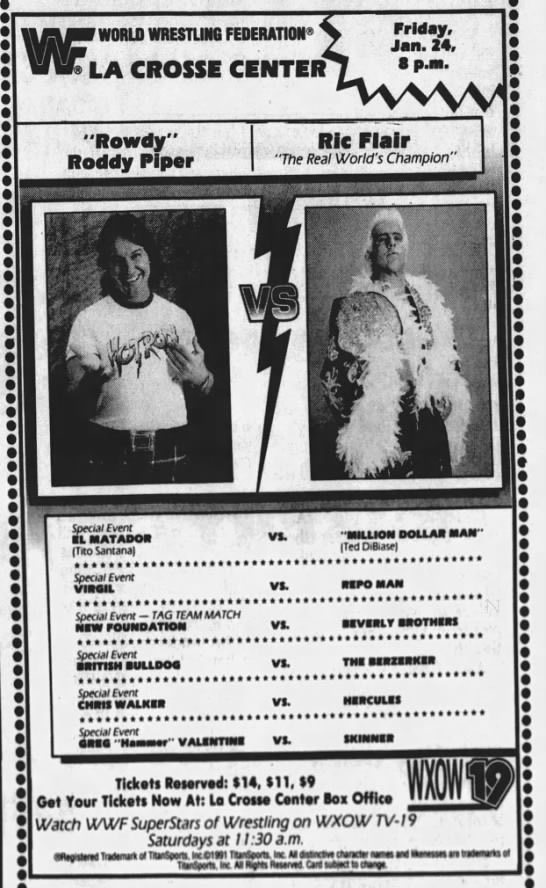 Overall, the match card for this show looked pretty lackluster (Chris Walker defeats Hercules!), a rather typical house show but, on paper, the main event of Intercontinental Champion Rowdy Roddy Piper versus WWF World Champion Ric Flair looked like a real standout match. I couldn’t believe I might have seen Piper and Flair locked up in a ring together and not remember it, but clearly I was more excited about in-ring performers like Virgil, Skinner, and the Berzerker, at the time, and I guess I wasn’t alone in that. In a January 25, 1992 LaCrosse Tribune article titled “Theater in the Flesh,” journalist Geri Parlin dedicates the first three paragraphs of her review of the January 24th WWF show to the Berzerker, “flaunting his Viking helmet and skimpy tunic,” and later refers to the crowd, “with blood lust in their hearts and programs in their fists,” chanting “Virgil, Virgil, Virgil,” and barely mentions the main event between all-time greats Roddy Piper and Ric Flair, other than briefly referring to Piper pulling down Flair’s tights, before losing to him via disqualification.

In May of 2015, I would meet Rowdy Roddy Piper at Motor City Comic Con, the same venue I met Virgil three years before, and where I’d eventually meet Vader and Diamond Dallas Page, as well. I didn’t mention seeing Piper wrestle Flair in LaCrosse, Wisconsin, because I had completely forgotten that I had ever actually seen him live, but when he asked me when it was that I saw him for the first time, I mentioned the wrestling program Saturday Night’s Main Event. I didn’t reference a specific match, but I told him my mom would occasionally wake me up on Saturday nights, after my bedtime, if Saturday Night’s Main Event came on NBC instead of Saturday Night Live. Piper told me that my mom was a good woman, then we took a series of absurdly blurry pictures together while the man helping out at Piper’s booth struggled to learn how to use the camera in my cell phone. Piper suddenly died two months after I met him, at the age of 61, and at the news of his death, I felt immensely grateful that I had that brief opportunity to meet him, shake his hand, and thank him for his legendary body of work. 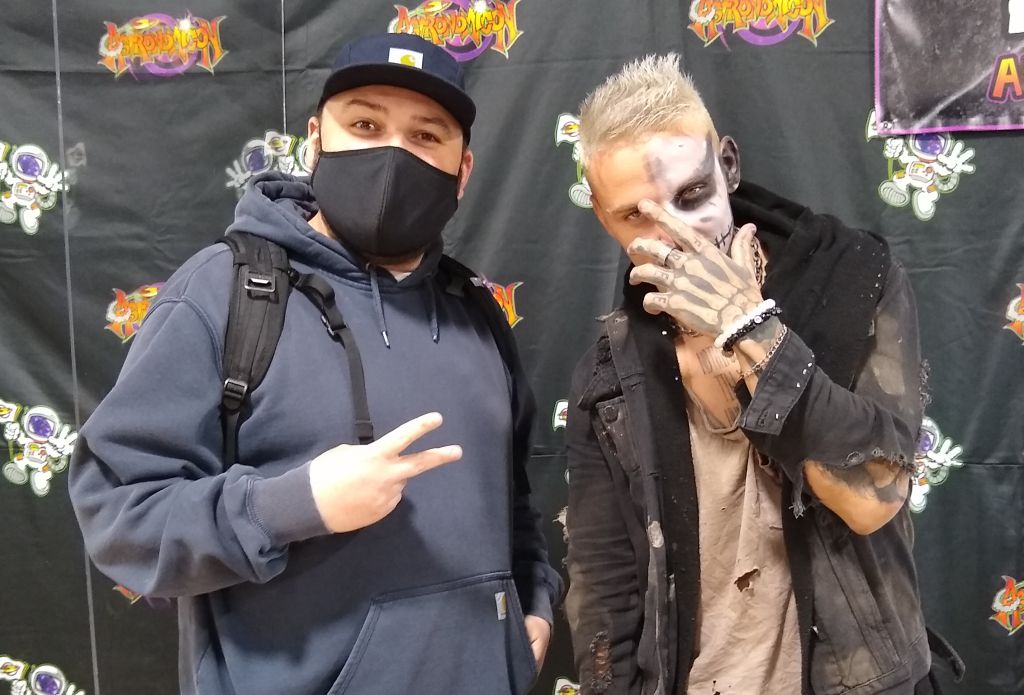 So, while Virgil may have been the first professional wrestler I ever paid to meet, he would be far from the last. I’m currently 42 years old, and just a few weeks ago, I walked five minutes from my home to State of Comics in Plymouth, Michigan, to meet AEW’s TNT Champion Darby Allin, a lithe, tattooed, skateboarding wrestler with a painted face whose name is an homage to Darby Crash (of the Germs) and GG Allin. The morning of my first meet and greet in well over a year, during breakfast, I sincerely asked my partner if she thought I was getting too old to pay to wait in line to meet professional wrestlers, especially those who were nearly half my age, rather than the retired legends I grew up watching, but by the time I got to my local comic shop, where Darby Allin was making his special appearance, and I saw the extended line of excited fans waiting to meet Darby, some with their faces painted like his, many holding Darby Allin action figures (mine was safely nestled “mint in box” in my backpack), others with replica championship belts over their shoulders, and almost everyone wearing wrestling t-shirts or hoodies or hats, I felt fully in my element, and confident in my decision to spend the better part of a gorgeous spring afternoon standing in line, waiting to meet another professional wrestler.