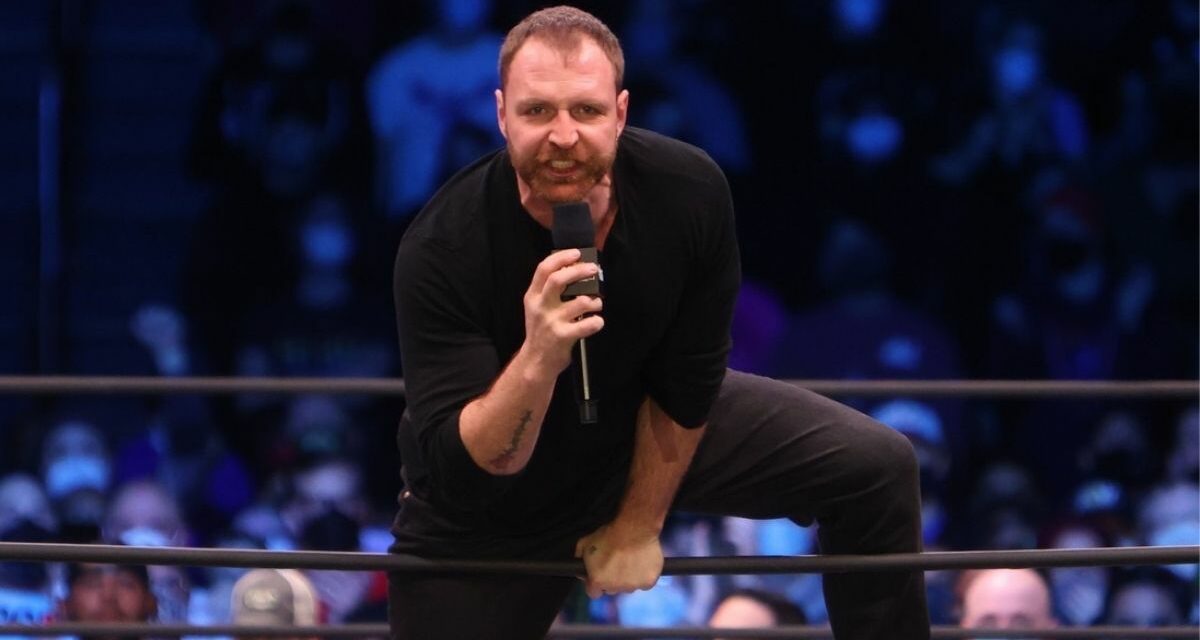 What’s in a name? In the case of Entertainment and Sports Arena, the venue for tonight’s AEW Dynamite from Washington D.C., literally nothing. OK, truth in advertising, I suppose, since it is indeed the home to entertainment and sports (like the WNBA’s Washington Mystics). But no sponsor, locale or famous person attached to an arena is a bit strange. That would be like if this was called Pro Wrestling Site instead of Slam Wrestling. Despite the lack of a memorable name, the building should be just fine for tonight’s card, which includes a mixed tag bout and a non-mixed tag team main event. To TBS we go, live for Dynamite.

“Wild Thing” can only mean one thing: Mox is back! The fans greet the returning Jon Moxley with enthusiastic cheers and a “welcome back” chant, and the man himself wastes no time dropping an f-bomb on a heckler and asking for them to be removed. The former AEW World Champion tells a personal story about a dream featuring him talking directly to his demons and the scars that people carry on the inside as well as their bodies. Mox says it’s those scars that make us the people we are, and that everyone should be willing to stand up in front of the whole world and bare those scars for all to see. A hyped up Moxley goes on to say he doesn’t run from his demons and thanks everyone who stood behind him before promising to grab the pro wrestling business by the balls this year. Oh, and he delivers a warning to … well, everyone, that he’s thirsty, and if you thought he was dangerous before, all he drinks these days is blood.

Think MJF is done with CM Punk? Not by a longshot, as he taunts Punk for his lucky win last week. MJF also apologizes to Wardlow for the way he’s treated his enforcer, but then quickly shows his true colors by docking Wardlow’s pay for putting his hands on his boss and praising Shawn Spears. That’s no birthday present, sorry Wardlow. 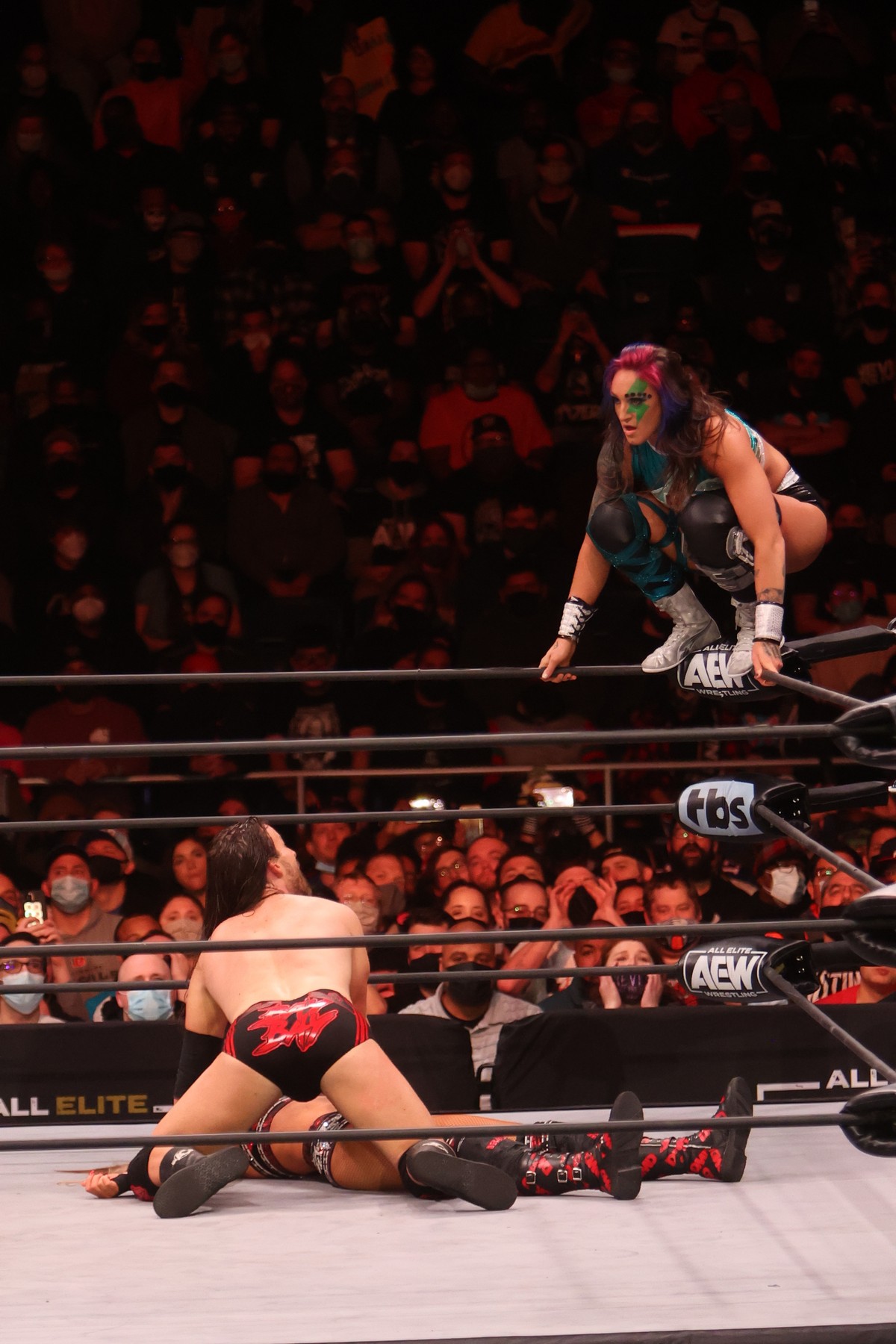 Interestingly, Excalibur informs us that Cassidy and Statlander have been tag team partners more often than IRL couple Cole and Baker. They execute a cool spot where Statlander has Baker in a delayed vertical suplex until Cassidy finally tips the doctor over in his own good time. There’s also a battle of hugs vs. kisses, and you likely don’t need me to tell you which side is which here. While the referee is occupied, Baker hits a Stomp on Cassidy but finds herself almost immediately under assault from Statlander. Cole puts his body in harm’s way to protect Baker, but Statlander hits an Area 451 on him anyway. Turnabout is fair play and all that, and the fans are digging this now. Cole teases a Panama Sunrise on Statlander, but it’s just a ruse so Baker can hit her own move. A Panama Sunrise in the ring on Cassidy should do it, but Orange kicks out at two. The heel power couple sets up the timekeeper’s table on the floor, but it’s Baker who takes an accidental fall through it from the apron. An angry Cole uses a low blow and running knee shot to put Cassidy away and hustles to check on Baker.

Santana and Ortiz sound like they’re having some second thoughts about their loyalties to Chris Jericho, who seems stunned that they would hint at being more loyal to Eddie Kingston than the Inner Circle. Then again, that faction has shown cracks in its foundation before and always held itself together.

Fresh from the Jericho promo, Alex Marvex finds Cole, who promptly dismisses him. Cole accuses Cassidy of putting his hands on Baker, which isn’t technically what happened, but it matters not as it’s going to be Cole vs. Cassidy next week in an anything goes, no DQ, lights out match. Hey, the last one of those was Baker against Thunder Rosa and turned out amazing.

A Shawn Spears video package is possibly necessary since he’s not wrestled much on Dynamite in recent months. He’ll face CM Punk next.

That third entrance theme belongs to MJF, who joins the announcers and watches in horror as Punk hits a quick GTS and puts Spears away in less than 30 seconds.

MJF tries to rush Punk while he’s celebrating in one corner, but Punk is wise to his tricks and winds up holding only the trademark scarf as Friedman slithers away to the relative safety of the ramp. He’s not going to go back for that scarf either. 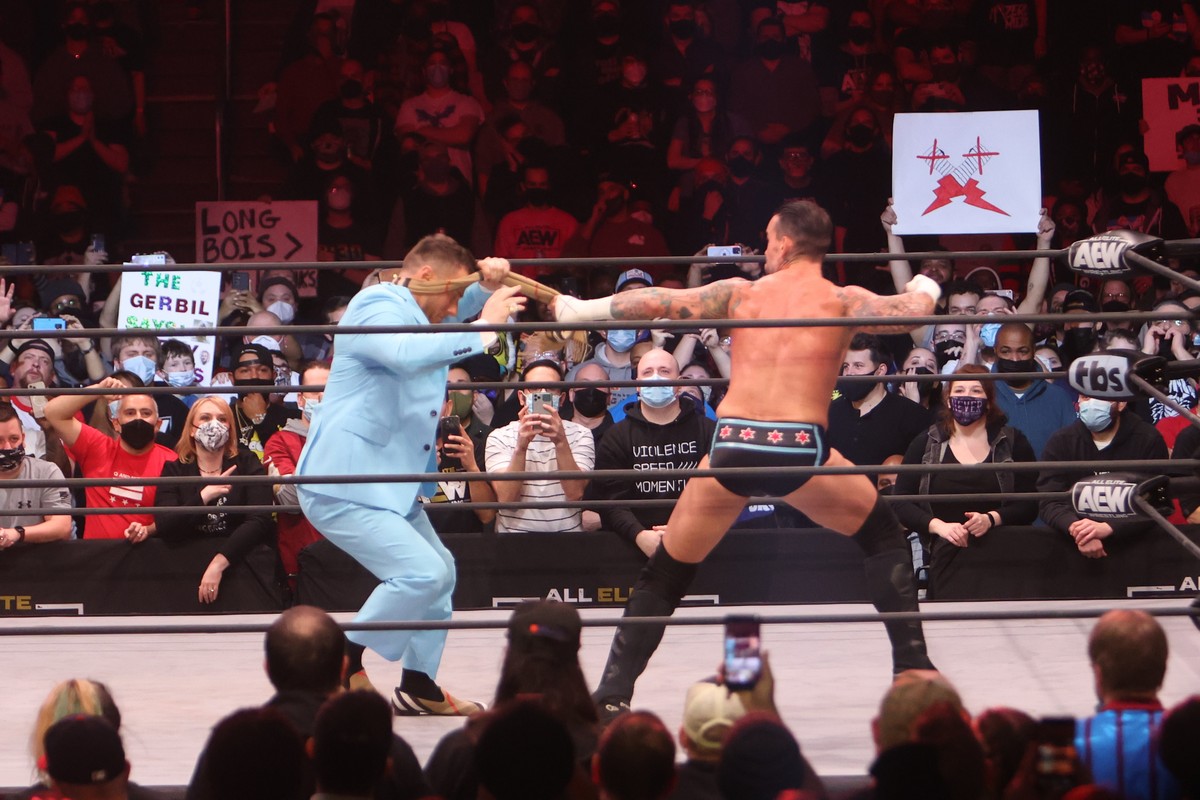 Outside the arena, Billy Gunn has commandeered a camera to tell Christian Cage that his sons deserve a shot at the tag team titles. Christian tells Billy that the Gunn Club needs to make a statement and then they’ll talk. They do exactly that when the younger boys arrive and throw Cage off a couple of metal roll-up doors. Statement made.

It’s story time with Cody Rhodes, who is in a biographical mood tonight. He claims to have built the Forbidden Door with everything he’s done throughout his career, which turns out to be a springboard not into a discussion of his own much talked about contract status, but instead some musings about recent AEW arrivals. Rhodes moves on to squash the notion of secondary belts with regard to the TNT Championship and says there’s a contract in the mail to settle things with Sammy Guevara (and also quips “maybe it’s not the contract that I wanted,” so there’s your reference to the rumors for you) and unify the regular and interim belts at Beach Break. 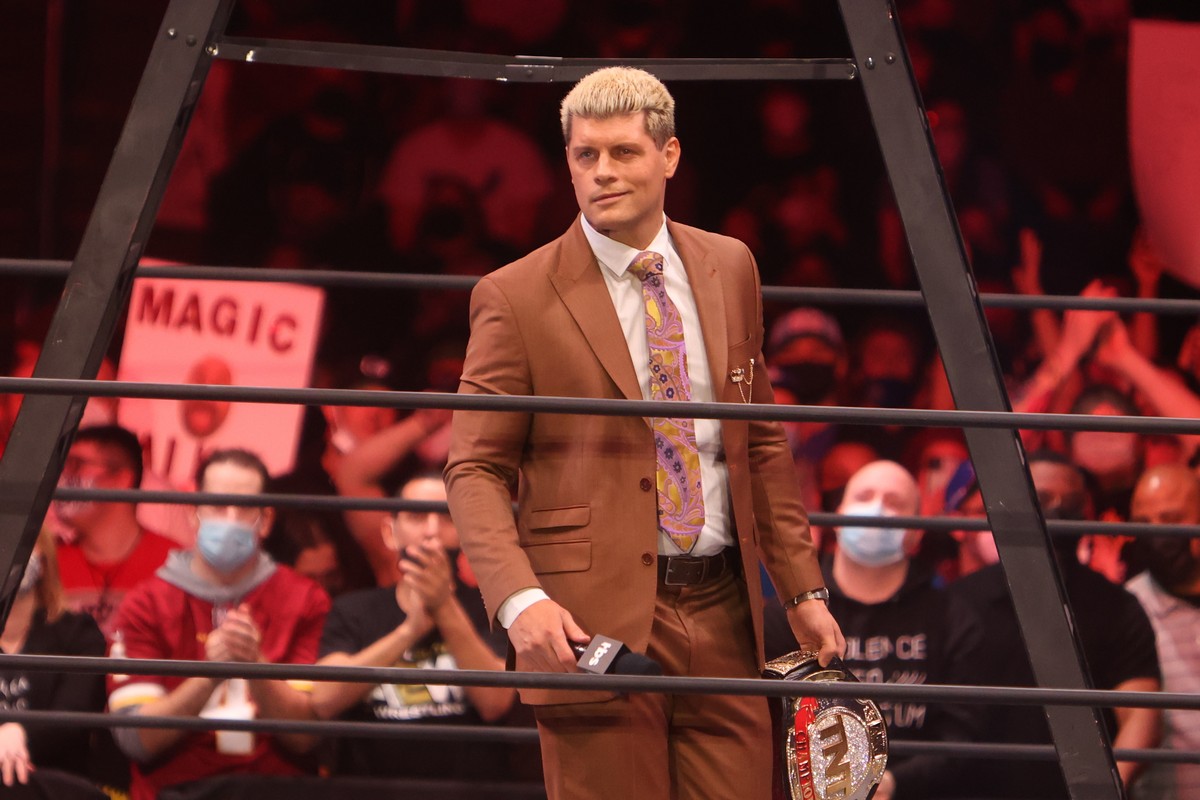 Jade Cargill has issued an open challenge for the TBS Championship that Anna Jay has accepted, and their backstage showdown gets John Silver involved, so that’s a win in my book.

Ah, kind of forgot the Blonds are still feuding with Black and now King, since they’ve fared so poorly against them to date. I don’t expect much to be different, but maybe they’ll at least get in more offense as a tandem. Uh yeah, not so much. Black and King roll right through them in just a few minutes.

What can answer the House of Black? Another creepy Pac promo, of course. His eyes seem to have recovered from the black mist, and he claims he’ll make a martyr of Black.

Roppongi Vice is reuniting for one night only. They’ve beaten the Young Bucks before, so they figure they’ll do it again in the U.S. Trent is even nice to Brandon Cutler, which no one ever is, so that’s nice.

The announcers puzzle over the supposed business arrangement between Roberts and Lambert, considering the latter once took the Blackout from Archer. This is a tough spot for Kaz, who has won lots of matches in AEW but largely to no real effect as a singles wrestler, and he’s certainly not claiming a victory here. Kazarian puts up a decent fight but eventually succumbs to the Blackout. 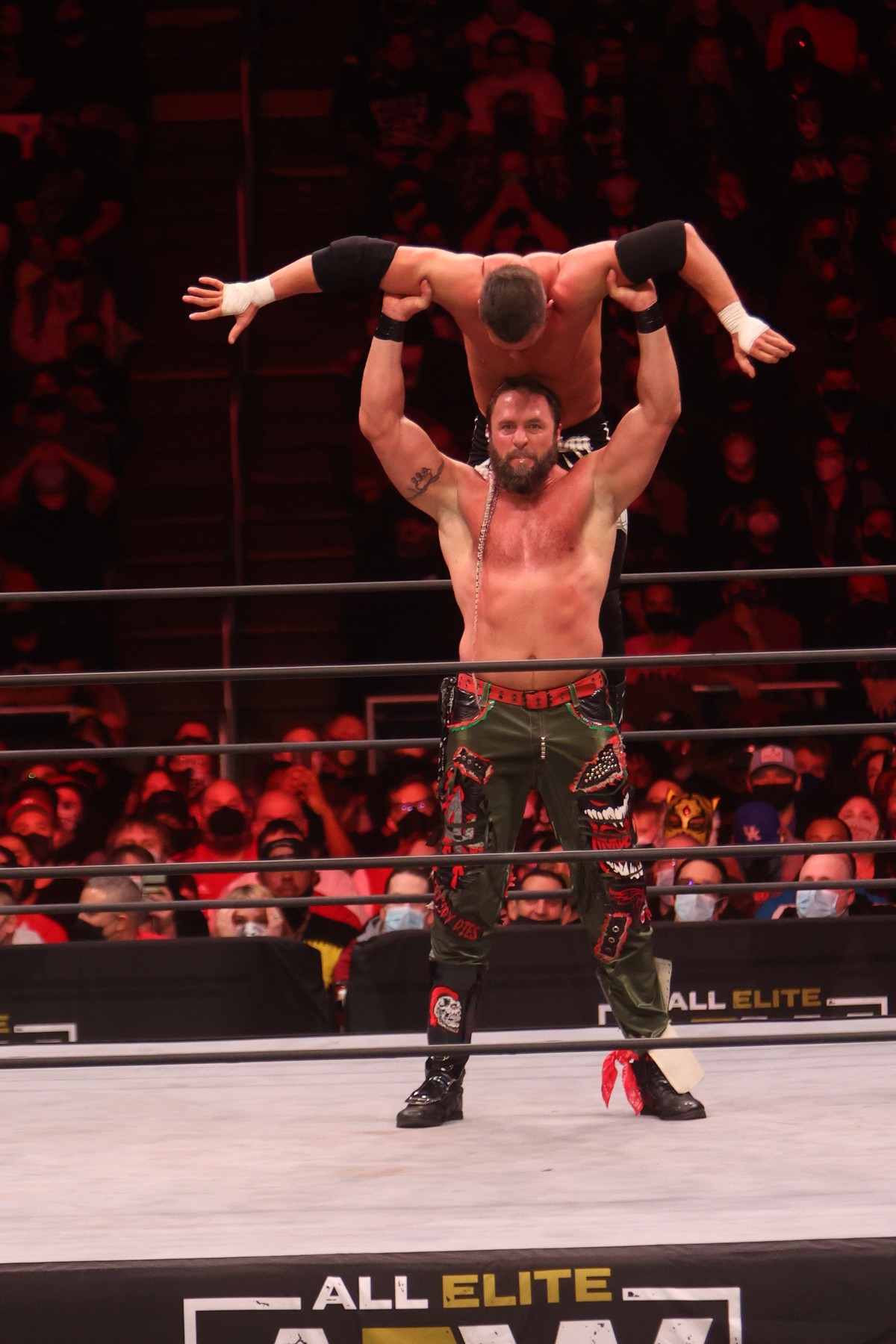 Tony Schiavone does the investigative journalist thing and is immediately rebuffed by Lambert, who accuses Hangman Adam Page of being a fake cowboy for the second straight week. Archer doesn’t need Lambert to speak for him, or to speak at all, as he intends to show Page exactly what he’ll do to the champ by using Kaz as a proxy. Chokeslam on a chair incoming … or perhaps not, as Page emerges from the tunnel and starts trading shots with Archer. A title belt shot wobbles Archer back into the ring, and though the Murderhawk Monster evades the Buckshot, Page eventually clotheslines him out to the floor. Round one to the Cowboy, it seems. 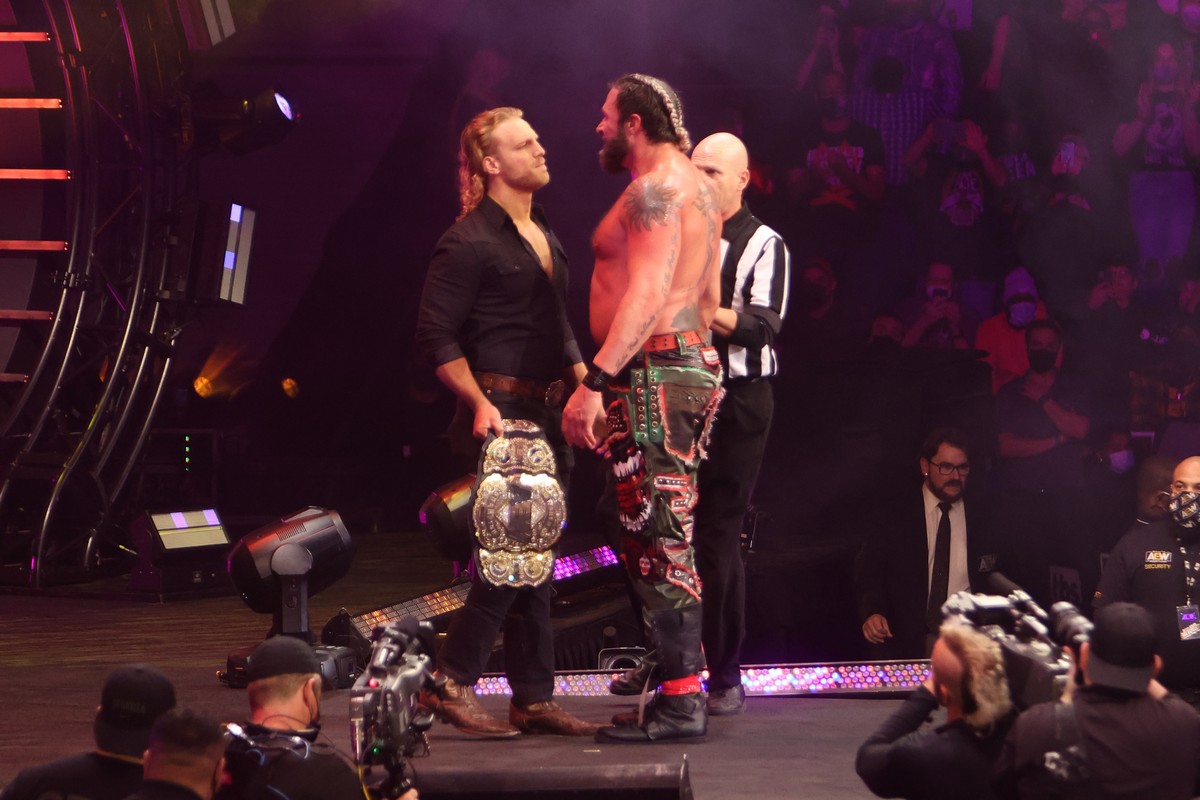 Go Marvez go. Dante Martin says he has the backs of Lee Moriarity and Matt Sydal until his brother returns, and they pledge to watch his in return. Ricky Starks and Powerhouse Hobbs are less than impressed.

It’s unclear how many people are enjoying the Statlander-Red Velvet-Leyla Hirsch drama, but if you are, you’ll be pleased to know it’s getting even hotter, with the women throwing down in the middle of an interview with Schiavone.

This feels like another potential squash, unless Hikaru Shida intervenes in this match. I did not know Deeb was from the D.C. area, making it more logical when the fans cheer her on as she decimates Blue. The Serenity Lock proves to be Blue’s end.

Ethan Page is more than happy to volunteer to be Moxley’s first opponent now that he’s back, which might be a mistake, but what do I know?

A video package provides context for the feud between Roppongi Vice and the Young Bucks, and teases Hook in action this Friday on a live Rampage.

Time for some business news. Matt Hardy is selling 51% of the Hardy Family Office to Andrade El Idolo. It will now be the AHFO, Hardy will be CEO and Andrade will be President. Look for more details on Bloomberg TV tomorrow.

The Acclaimed live up to their promise and do a mildly amusing video mocking Darby Allin and Sting. Someone in the crowd is down with that vibe, holding up a “Goth Phase” sign.

The Acclaimed vs. Darby Allin and Sting 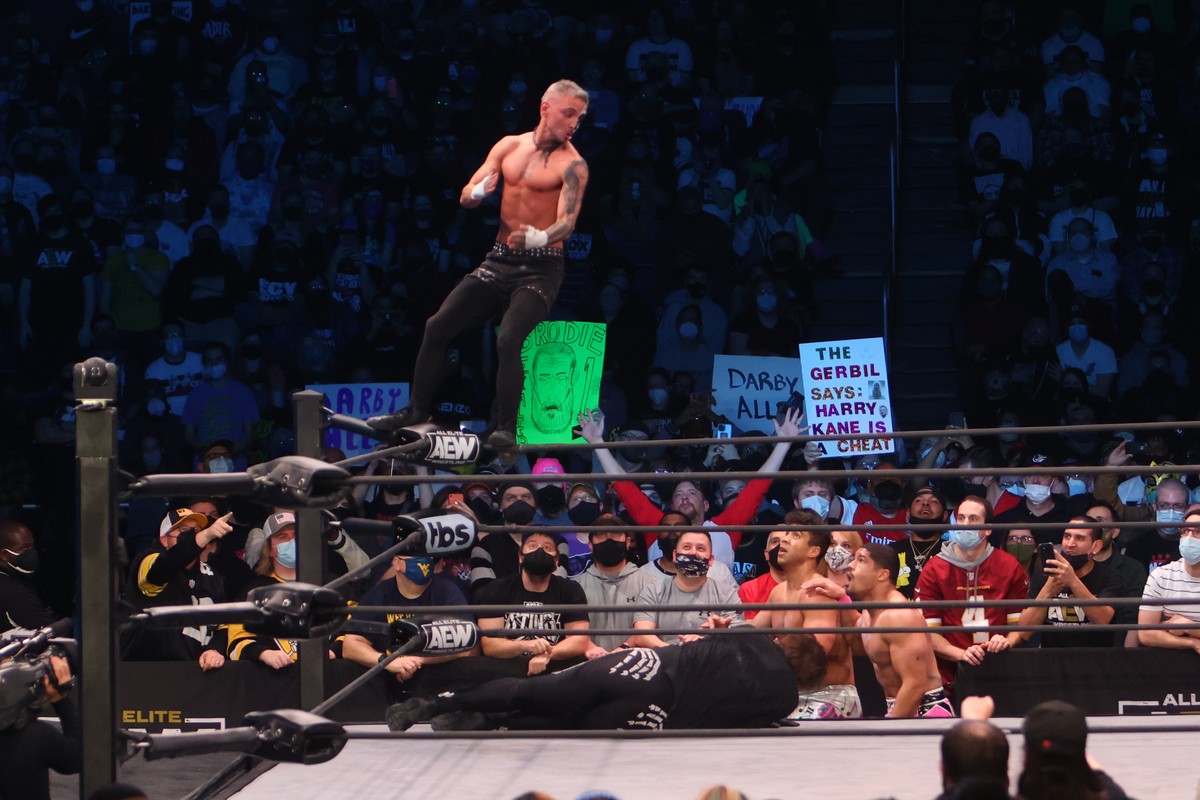 The Acclaimed vs Darby Allin and Sting at AEW Dynamite, at the Walter E. Washington Convention Center in Washington, DC, on Wednesday, January 19, 2022. Photo by George Tahinos, https://georgetahinos.smugmug.com  MORE PHOTOS IN THE GALLERY!

Every time I watch Sting wrestle on live TV in the Year of Our Lord two thousand twenty-two, I pinch myself a bit. I like his look tonight as well, sporting a scorpion t-shirt over his black pants. The heels’ plan is to take Allin out of the equation early, meaning before the opening bell, which isn’t a bad thought, except that Sting is Sting and Darby is harder to kill than a slasher movie franchise villain. Sting makes his younger opponents take some bumps out to the floor before taking flight from the stage and (sort of) smash Max Caster through a table on the floor. Allin hits a Coffin Drop on Anthony Bowens to get the three count.

And we’re out of here with a minimum of fanfare tonight. May all your arenas find naming rights sponsors, and see you in seven!

That opening promo from Moxley and Cody’s microphone time were the highlights tonight, and both felt straight from the heart while addressing very different topics. The in-ring portions were fine but not spectacular, though much respect to Sting for putting his body on the line like that at his age. Beach Break looks to be suitably loaded up, so next week should be fun.