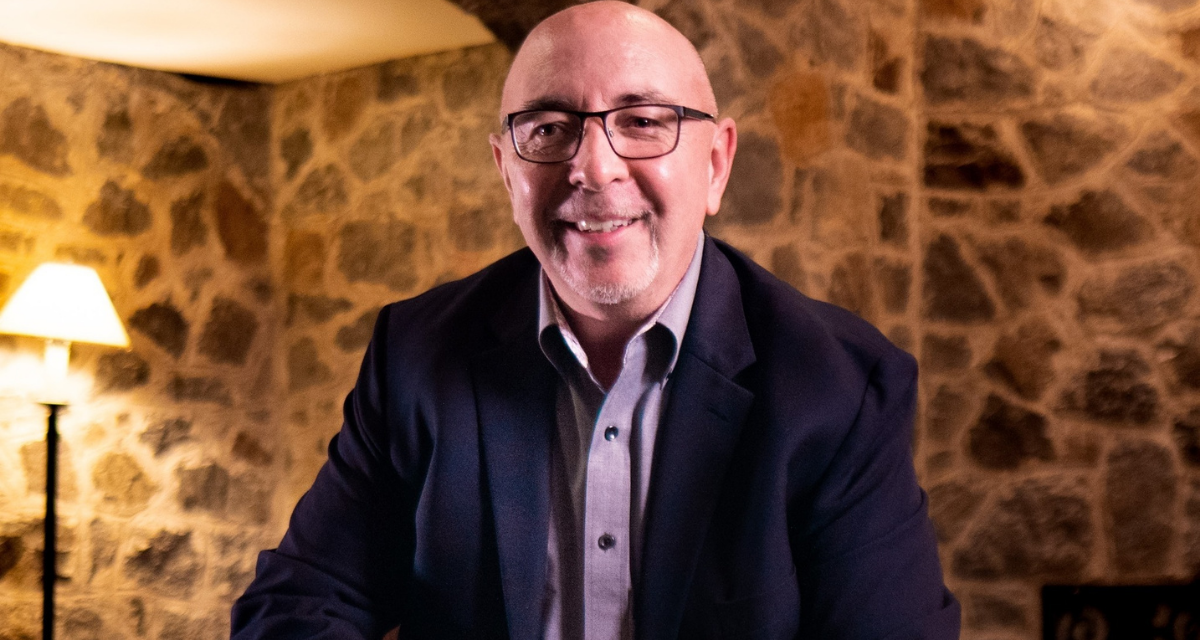 It’s the early 1990s. Van Halen, The Crüe and G’n’R still rule the hard rock world before grunge explodes out of Seattle. On the other end of the continent, Big Stephen Petitpas walks into the arena dressing room and introduces his latest wrestling protégé, a 7-foot-1 kid from nearby Ste-Marie-de-Kent. Tall, shy and with the physique of a freshman college basketball player, I shake the hand of Robert Maillet – “The Bouctouche Giant.”

I respond by telling Stephen, “That’s not going to work. We can do better.” 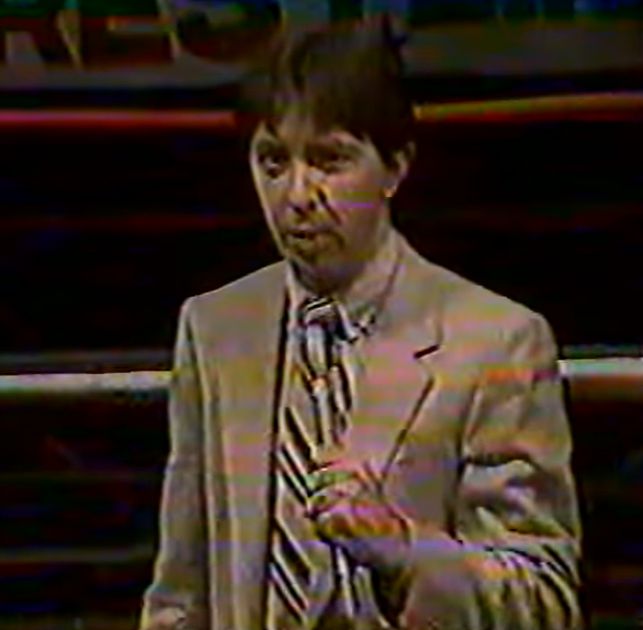 That’s my earliest recollection of a deep dark secret unbeknownst to the titans of industry that I speak to and consult with all over the world. As a globally recognized branding expert, I receive frequent invitations to address executive forums throughout North America, Europe, the U.K. and Asia on the subject of how companies and organizations create an ‘irresistible’ brand; one that exerts a powerful, magnetic force that inspires customers to line up out the door and come back again and again. In my presentations, corporate audiences are held spellbound as they learn the real difference between a brand that becomes legendary as opposed to one that languishes in any product/service category mosh pit of being perceived as run-of-the-mill and ordinary. Metaphorically speaking, it’s like the journeyman jobber who never appears at the top of any card with a definable character that captures the wild imagination of the wrestling public.

Appearing in the main event and wearing the strap is an exclusive domain reserved for the legends. In pro wrestling that list would include Gorgeous George, Kowalski, Sammartino, André, Hogan, Piper, Flair, Savage, The Rock, The Undertaker, The Bulldogs, The Hart Foundation and too many other to name here.

Can you start to smell what’s really cooking here?

Are you ready for the ultimate reveal of a cloak-and-dagger technique that could make you a stylin’, profilin’, limousine riding, jet flying, kiss-stealing, wheelin’ n’ dealin’ son of a gun?

What if there is a direct connection between larger-than life brands with enduringly irresistible, magnetic appeal and the creation of outsized wrestling personalities whose fame transcends the four corners of both the squared circle and the entire world?

Despite the pleas from many friends and colleagues to do so, I never explain this connection between mayhem and marketing to mainstream business audiences.

Until the “Super Scribe of Slam” Mr. Greg Oliver asked me to do so, I have been reluctant to publicly reveal this clandestine source of insight that dramatically impacted some of the stories and case studies captured in my latest book. Nearly four years in the making, Big Little Legends takes you behind the metaphorical curtain so you can explore the origin of legends, see how they are created and how that might help you build an irresistible brand that positively influences buyer behavior in your favor. The way we choose what to buy, like the way we choose to vote, which football team, rock band or pro wrestler we support will never be logical. This is why the brand legend in any product/ service category will always enjoy a hefty competitive advantage over many other players hoping and trying desperately to get noticed.

In the world of pro wrestling, it’s similar to what happened to a certain Mr. Steve Williams formerly known as “Stunning Steve Austin”, “The Ringmaster” and member of a tag team called the “Hollywood Blonds.” He would wear glittering red sequin robes, hob nob with “The Million Dollar Man” Ted DiBiase, but for years he never felt he owned a character and persona true to himself.

In 1996, his entire story and personal brand strategy changed with four words:

Those four words became the brand story that captured the personality, in-ring talent, and promo ability that was already present.

The bedrock of his brand — four carefully chosen words — allowed Steve to create an iconic image that would extend to the “Austin 3:16” moniker and eventually merchandise. It made the Texas Rattlesnake seem larger than life; a certified mainstream celebrity he who refused to tell young fans to say their prayers and take their vitamins. The “Stone Cold” brand was all about rebellion. Austin had no qualms about drinking beer in the ring, flipping the bird, peppering promos with cuss words and showing no respect whatsoever for authority.

Flashback to that dressing room at the Cocagne Arena and now you can see why I am explaining to Big Stephen Petitpas that our new wrestling star needs to be named, “The Acadian Giant.” Perhaps that will be a concept that has a chance to catch on. To make people in the Maritimes connect with this home-grown talent with the potential to tap into the pride of an entire region that already has their own distinctive language, holidays, music, traditions, flags and celebrations. Otherwise, we run the risk of having the promising Robert Maillet being perceived as just another local-yokel jobber. 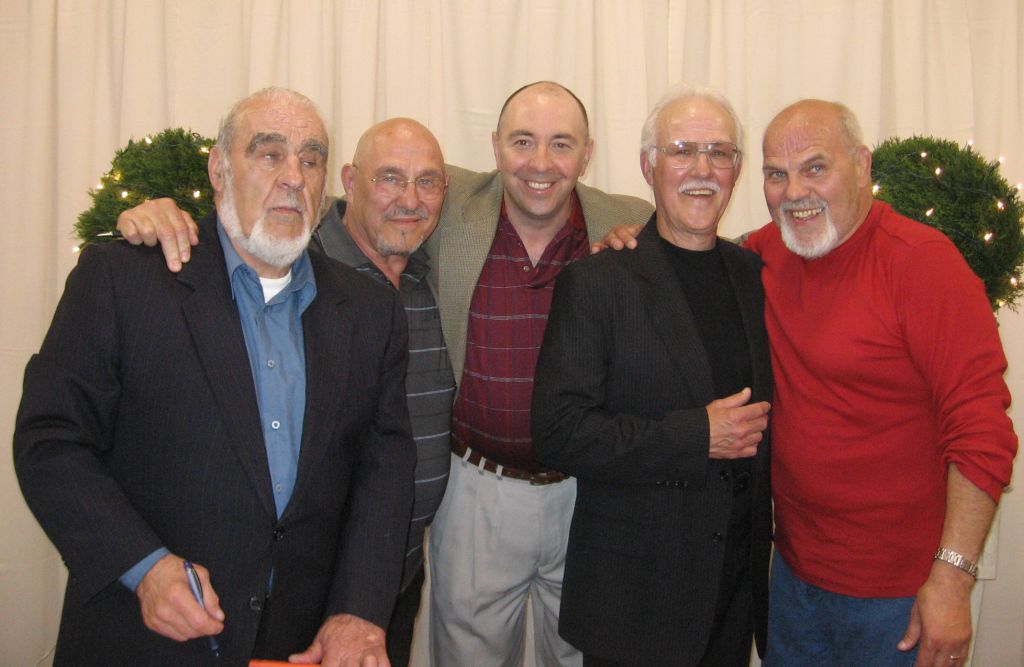 Gair Maxwell, center, at a reunion of the Cormier family in 2006; left to right, The Beast, Rudy Kay, Gair, Bobby Kay and Leo Burke.

History will show the Acadian Giant eventually got enough attention on the Atlantic Grand Prix circuit to warrant a look from the WWF. Maillet made his big-league debut on November 11, 1991, when he wrestled as The Cajun Giant, defeating long since forgotten Bob Bradley in a dark match in Utica, NY. Maillet’s character went on to evolve as “Kurrgan”, becoming a member of The Truth Commission and The Oddities before appearing as an actor in films such as Sherlock Holmes, Pacific Rim, Hercules and Deadpool 2.

At one time, Steve Williams, Robert Maillet and the businesses profiled in Big Little Legends were hoping to get a break that would make the world sit up and take notice. Although you won’t see any connections in the book between what happens behind the scenes in mat wars and marketing, you are now aware of this previously undisclosed link to the 12 chapters. Timeless lessons that anyone with sufficient curiosity, courage, initiative and vision can apply to step into the ring and create a compelling brand that is both substantially different and enduringly relevant.

Gair Maxwell was the announcer for Atlantic Grand Prix Wrestling in the mid-1980s. For more information about Gair and his social media links, visit www.gairmaxwell.com. For more on his days as an announcer, read our 2011 story: Wrestling keeps following Grand Prix announcer Gair Maxwell around.