It’s mid-January, and Gair Maxwell is a featured speaker at the Atlantic Brand Confabulation, and is on just before the keynote address by Gene Simmons of KISS. But after it was all over, one of the audience members came up to Maxwell and wanted to talk about Atlantic Grand Prix Wrestling.

There’s no getting away from his past, and Maxwell is okay with that.

The 49-year-old Maxwell was the host of a Moncton, New Brunswick, sports radio show when he approached Grand Prix promoter Emile Dupre about having some wrestlers on his program.

“I think Emile Dupre, in the back of his mind, was looking for a new announcer anyway. He had heard me on the radio, obviously, in that market,” Maxwell recently told SLAM! Wrestling.

Dupre invited Maxwell to come down and do some guest commentating. It grew from there, and Maxwell was the host of the TV show during the later 1980s.

“By accident, I just slipped into it,” he said.

There was a steep learning curve, he admitted, and he had to gain the respect of the locker room. “I kind of had to earn it along the way. I really did just learn as I went. But there were a few guys that helped point out things, like Leo [Burke], like Frenchy Martin — he was a good one, and Buddy Lane, and Bobby Bass. Yeah, Bobby Bass was a great one to work with early on, and I never forgot that.” 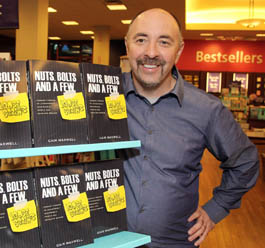 Gair Maxwell poses with his book.

The summer tours brought in a lot of names during the years, and Maxwell starts listing names he met: Ric Flair, Harley Race, the British Bulldogs [The Dynamite Kid and Davey Boy Smith], Killer Karl Krupp, Bulldog Bob Brown. “Let’s face it, I got to meet some great people, I really did.”

The local babyfaces were the Cormier family (The Beast, Rudy Kay, Leo Burke and Bobby Kay), that he looked up to as youngster. “I was probably no different than a lot of Maritime kids. I grew up just worshiping The Beast and Leo Burke, all the different personalities on the Grand Prix circuit.”

In his current role as a speaker, Maxwell has given some thought to his legacy in sports and wrestling, especially how it ties into what he does now.

“I think it fits into its place,” he said of his past. “The fact is that a lot of what I do as a professional speaker and the way I entertain an audience, a lot of it, a fair amount of it, comes from what I learned in the wrestling business. … Which is unpredictable, you have to say and do things that will emotionally engage your audience, good, bad or indifferent. You’ve got to find a way to really zero in and hone in on emotion. That’s one of the things that I do on every stage I speak at.”

In short, whether he is speaking to car dealers, manufacturers or marketers, “people are people and they will respond to things that effect them on an emotional level.”

During a 20-year career in broadcasting, Maxwell figured he racked up more than 10,000 interviews and 30,000 broadcasts. Besides working in his hometown of Moncton, he also spent time in Calgary and Red Deer, Alberta (where he worked alongside future Hockey Night in Canada host Ron MacLean).

Yet he knew, in the back of his mind, that he couldn’t do broadcasting forever and tried to plan. “I kind of saw the writing on the wall, for me, in the broadcasting business,” he said. The radio station that was his primary employer was about to downsize, and it did, wiping a lot of veterans out. “I didn’t want to be swept away without having an actual say in it.”

When he was cast aside, he was lost and devastated. “It was the only thing that I’d ever done my whole life.” 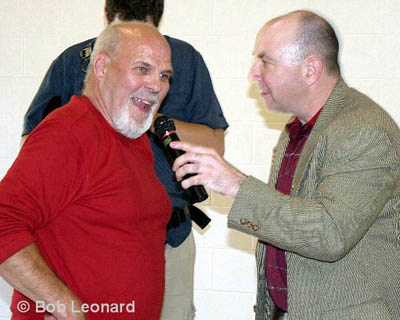 Gair Maxwell, right, returns to his old role, interviewing Leo Burke at a 2006 celebration of the Cormier family in Memramcook, New Brunswick. Photo by Bob Leonard

Complaining to a friend one day, she invited him to a small business seminar to get his mind off his woes. Though Maxwell didn’t understand the content, he did think he could do the job of the presenter — or better. When he spoke up after the seminar, his friend said he could have his chance, half a day, to present something.

“I came up with, on the spot, the only thing that I actually had expertise on, which is, I will train them what to do when the media calls,” Maxwell recalled. He then developed a media training program. “I went in and taught that class, and I was hooked, because it was much more real than the broadcasting business. And you actually had to deliver value as opposed to fill a timeslot.”

He started looking into corporate training, and started a distributorship for the Canadian Training and Development Group. Maxwell now does almost a hundred speaking engagements a year.

“After a while, you start to develop your own theories, you start the whole business of writing. You eventually follow a path that leads you to putting all of your thoughts together in a book, and then you get published. Then it just keeps going,” he explained.

His Nuts, Bolts and a Few Loose Screws came out in mid-2010, from Wizard Academy Press.

Reception has been positive so far, given that it isn’t a major publisher.

“It seems to be developing its own groundswell, that people who actually read the book love it,” he said, launching into a description how the book came about.

“I wrote the book like a rock concept album. I did. After a couple of years of trial and error and frustration, I literally said, ‘Fuck it, I can’t write a chapter book. And the world doesn’t need another business book that’s in a traditional format.’ So I wrote my book my way,” he said, crediting Pink Floyd’s The Wall, and The Whos’ Tommy as a couple of inspirations.

The idea is that Maxwell gets points across through his stories or essays, like songs. It doesn’t matter where the reader picks it up, since you can skip around, but there are underlying themes that connect everything together.

Part of the goal of Nuts, Bolts and a Few Loose Screws is to ask, What makes a great brand stick, and what’s it all about? “It’s way more than just logos and tag lines, slogans and marketing fluff. That’s got nothing to do with it,” Maxwell said.

Having expounded on marketing, the conversation comes back to wrestling — as it always does. Hearing about the fate of some of the wrestlers he knew in the Grand Prix days, Maxwell laments that he didn’t know then what he knows now.

“They were 100 per cent commissioned contractors,” Maxwell concluded. “I’ll tell you from my business experience, where these guys all went wrong — and now, of course, it’s all too late — is they thought of themselves as wrestlers first, entrepreneurs second. They really didn’t understand the scope of what they were doing.”

Ask around, and you’ll find that Greg Oliver has a few loose screws too. Greg can be emailed at [email protected].