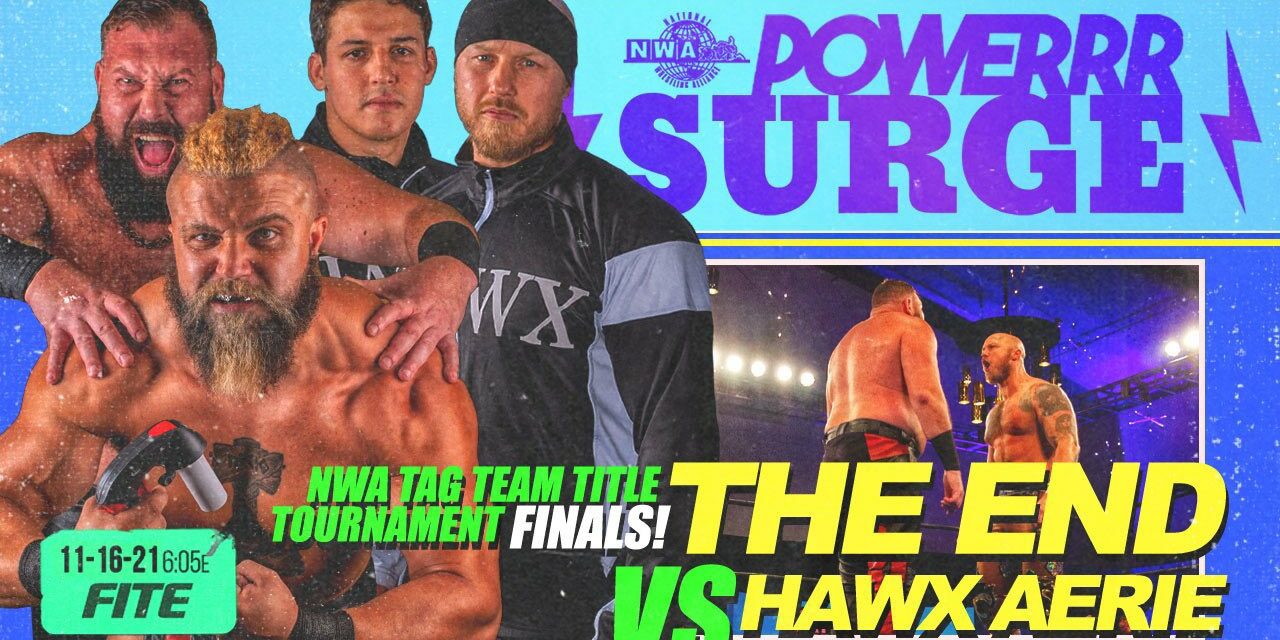 NWA brings us the November 16th edition of NWA PowerrrSurge! Tonight, the living legend Melina is in action, and the Tag Team Title Tournament reaches its conclusion! 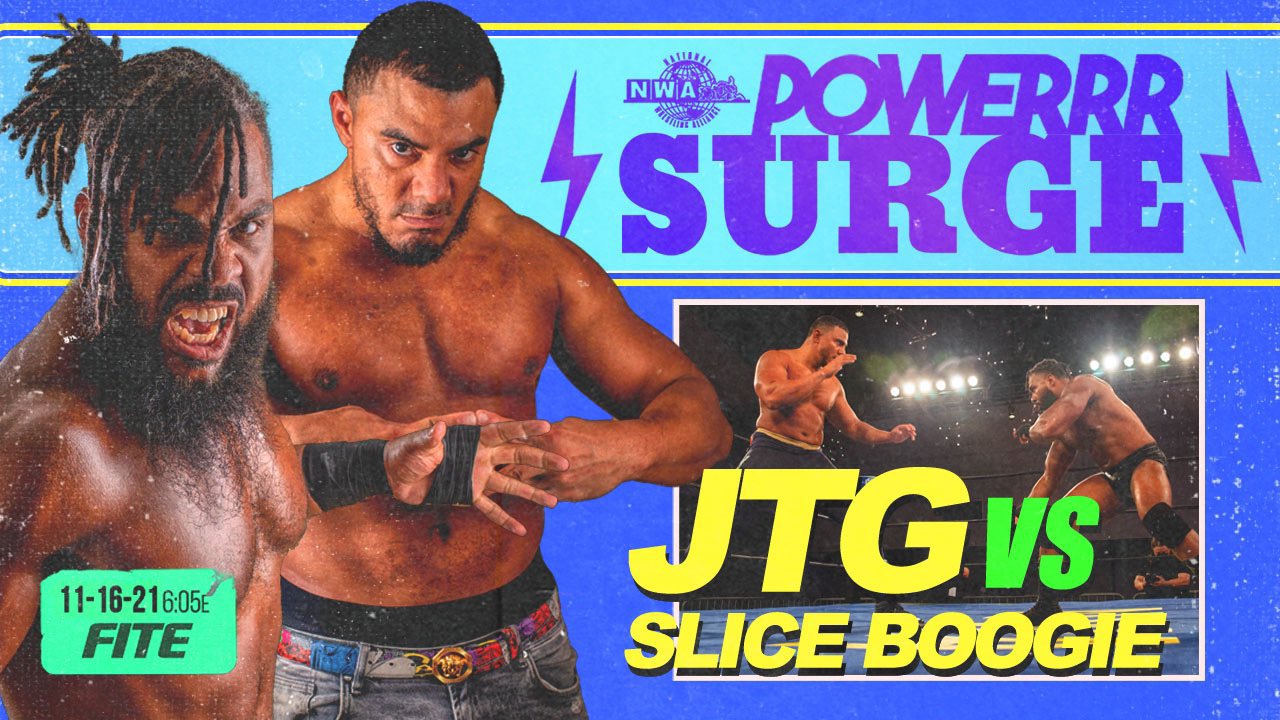 JTG starts off the match by controlling Slice Boogie with wrestling holds, before Boogie hides behind the ref and then strikes with a sucker punch to gain the advantage. JTG regains control with a dropkick and a slingblade, but it only gets him a 1 count. JTG traps Boogie in the corner with some elbows, but when JTG goes for a kick, Boogie reverses it into a slam followed by an elbow drop for 2.

Boogie delivers a clothesline and a suplex, but he only gets another 2 count. Boogie applies a head crank, but JTG escapes with some elbows and a punch, followed by a big clothesline and a neckbreaker. JTG delivers a creative facebuster and a spinning slam, but Boogie kicks out at the last second. The veteran JTG hoists Slice up to the top rope and looks for a superplex, but Boogie shoves him away.

Colby Corino distracts Boogie, allowing JTG to roll Boogie up. Corino comes back in to attack Boogie, but Sal Rinauro comes out to take on Corino. JTG and Boogie join the fight, and ref is forced to call the match as it was getting too chaotic. 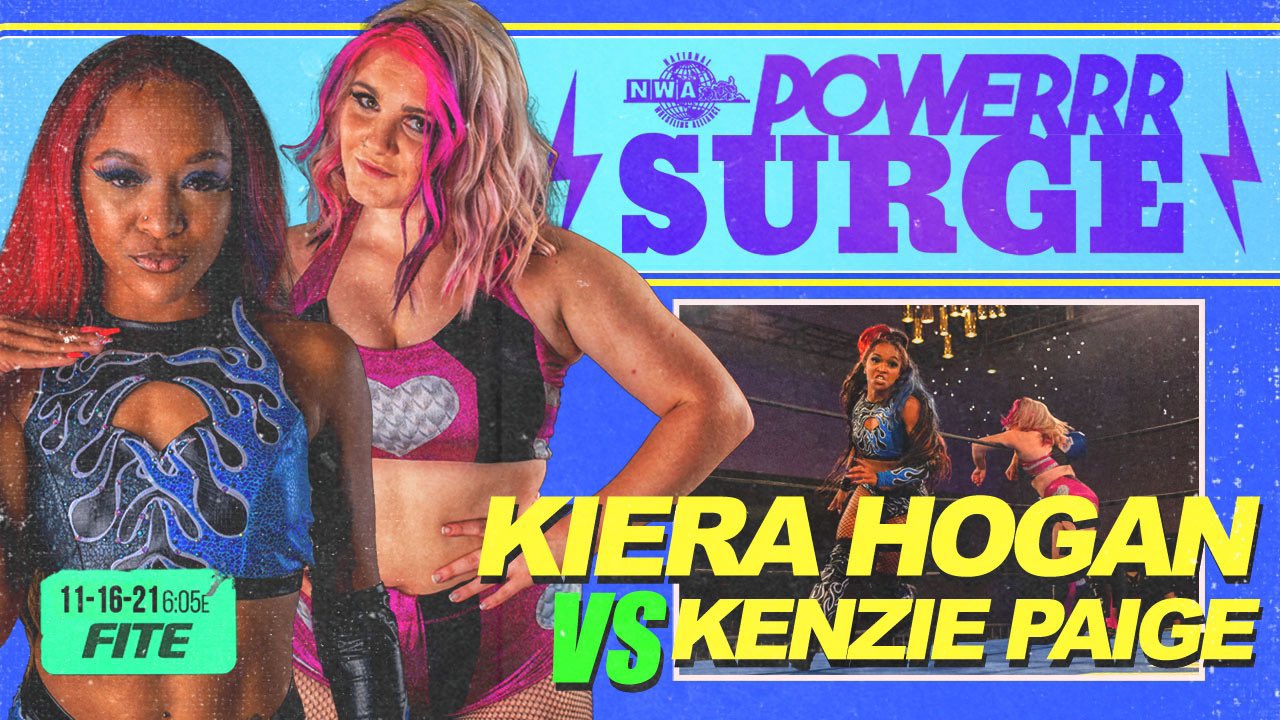 Kenzie Paige and Keira Hogan start off by trading armlocks, with Paige gaining control with an arm drag, before delivering a double knee strike to Hogan on the ropes. Hogan dodges a clothesline in the corner and attacks with a kick with blinding speed. She hits a brutal kick to the chest followed by a mean neckbreaker that gets her a 2 count. Hogan locks in a headlock, and when Paige tries to escape, she rains fists down upon her back. She looks for a German suplex, but Paige avoids it and delivers a superkick.

Paige rallies with some clotheslines and a powerful elbow strike, and adds on a step-up enziguri that gets her a 2 count. Paige locks in a full nelson that Hogan tries to reverse into a German suplex, but Paige reverses it into her own suplex. Paige looks for a running knee, but Hogan avoids it and hits a roundhouse kick followed by a Fisherman’s Neckbreaker to pick up the win. 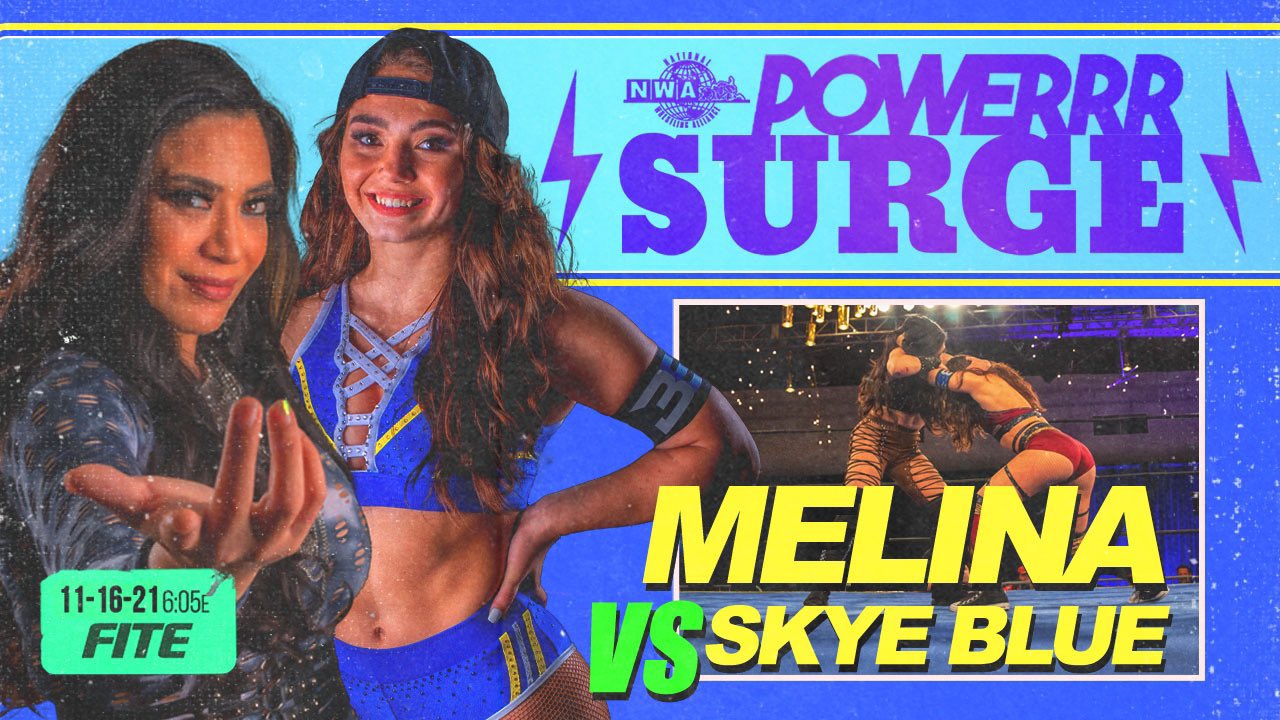 Melina fairly easily outwrestles Skye Blue to start the match, using her experience to fight circles around her younger opponent. She delivers a series of arm drags and gets a 1 count out of it, and when Blue tries to fight back with a forearm, Melina uses a creative move to drive her opponents head right into the mat for a close 2. Blue avoids a sunset flip powerbomb and tries for a suplex, but Melina reverses it into a leg sweep, putting Blue in position for the California Nightmare, which forces Blue to tap out.

BLK Jeez locks in a painful arm wringer to control YUMA, but YUMA reverses it into his own arm wringer. Jeez escapes and hits a shoulder tackle, before blowing his nose on YUMA. YUMA delivers a forearm and what the commentators called a “hip attack,” but when he goes for a monkey flip, Jeez puts him up on the second rope.

YUMA shoves Jeez away and hits a flying crossbody, but Jeez cowers between the ropes before delivering a cheap poke to the eyes. He utilizes a chop and a back elbow before yanking at YUMA’s moustache. YUMA tries to fight back with some punches, but Jeez delivers a Heart Punch and a tilt-a-whirl backbreaker to get a 2 count. Jeez locks in a knee-assisted straightjacket, but YUMA fights out and delivers a series of punches, as well as a running hip attack and a jumping kick for a close 2 count.

YUMA goes to the top rope, and Jeez jumps up there as well. YUMA shoves him away, but Jeez lands on his feet and ducks YUMA’s flying kick. YUMA looks for a hip attack, but Jeez avoids it and delivers the Conversion Brainbuster and a Frog Splash. He adds on a Heart Punch and picks up the victory.

Following his victory in a cage match at By Any Means Necessary, NWA Champion Trevor Murdoch was taking pictures with some fans when Mike Knox made his appearance and locked himself in the cage with Murdoch, beating the champ severely with chairs and choking him with his shirt. He ripped open the cage door and left, and not a single person stood in his way. Following this attack, Billy Corgan has announced that Knox will face Murdoch at Hard Times 2.

Parrow starts off against Luke Hawx, with Luke attempting and failing a shoulder tackle on the bigger Parrow. The two shout insults and taunts at each other before Luke stomps on Parrow’s toes and tags in PJ Hawx, who immediately gets grabbed around the throat. PJ escapes and dropkicks Parrow to his corner, where he tags in Odinson, who comes in and tosses PJ around the ring effortlessly. PJ tries to rally with a headscissors, but Odinson tosses him to the ground. He tags in Parrow, and they execute a powerslam/splash combo for 2.

Parrow locks in a sleeper hold on PJ, but PJ fights out with a flurry of punches. Parrow stops his momentum immediately with a chokeslam, but he underestimates PJ and pins him with just his foot, and PJ kicks out at 2. Parrow beats the chest of PJ while taunting Luke, and he shoves Luke off the apron before tagging in Odinson and picking PJ up. PJ escapes his grasp and shoves him into Odinson, before tagging in Luke, who uses incredibly fast kicks to stun the members of The End.

Luke goes for a hurricanrana, but Parrow catches him and hoists him up onto his shoulders, and Odinson climbs to the top rope and the two deliver the Doomsday Device to pick up the victory and win the Tag Team Title Tournament. They’ll be going on to face La Rebelión at Hard Times 2 for the NWA Tag Team Championships.

Winners via pinfall: The End

This is my first time watching any NWA show, and this was a really enjoyable experience! Great action across the board, the only match I have something to complain about is JTG and Boogie Slice, and that’s only because I tend not to like double disqualifications endings.