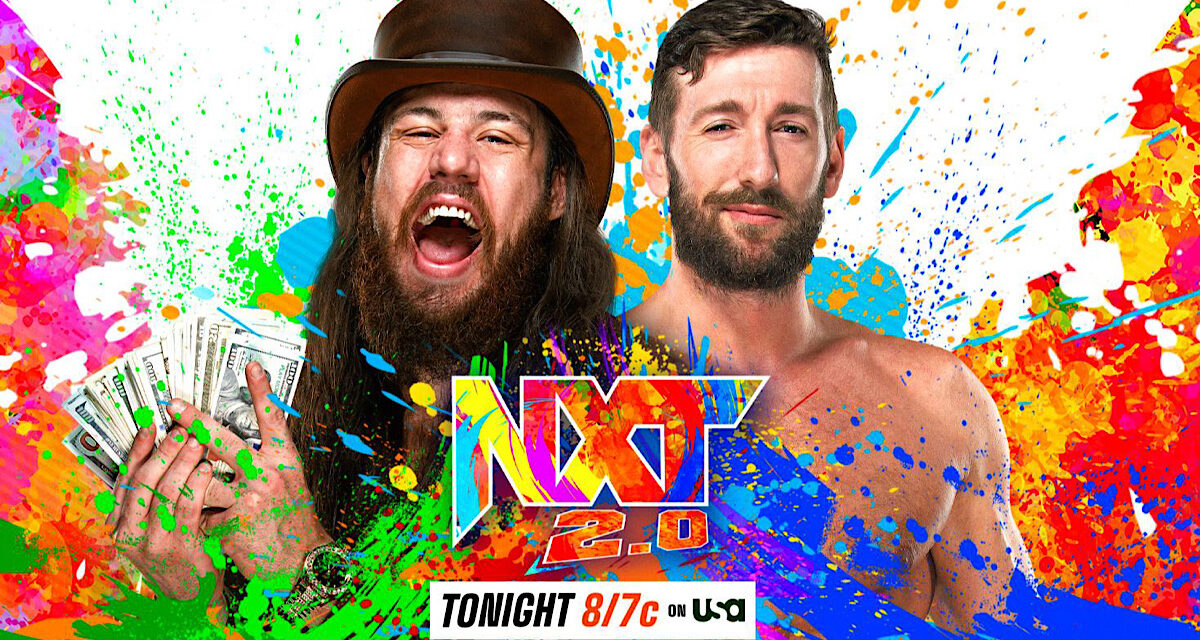 While NXT 2.0 has struggled to produce some solid wrestling programming, the brand is evidently pretty good at this No-Limit Texas Hold’em stuff. Cameron Grimes and Duke Hudson’s high-stakes game highlighted tonight’s episode, which is simultaneously a testament to both men and a downright diss to NXT 2.0.

Lumis reveals a painting of D’Angelo “sleeping with the fishes,” because mobster cliches are the whole shebang. After escaping Lumis’ comeback and choke-out attempt, D’Angelo grabs Lumis’ easel as a distraction. He pokes the eye, hits the finishing deal, and gets the victory. The beating isn’t done for Lumis though as Trick Williams and Carmelo Hayes attack from behind. Hayes crushes Lumis’ hand between a steel chair, and Johnny Gargano makes the late save. Since tonight’s opener wasn’t Toxic Attraction again, the hilarious D’Angelo and crew were a nice change of pace.

Gargano takes the microphone to call out Hayes, but Pete Dunne enters instead. On second thought, Hayes and Williams appear from the balcony. Hayes “talks (his) talk” and challenges both opponents to a triple-threat match for next week. A North American Championship banger is incoming!

Joe Gacy interrupts a backstage Diamond Mine promo, and Malcolm Bivens shoos him away with tryout information. Of note, Roderick Strong is still there. Unluckily for him, he probably isn’t going anywhere.

An LA Knight vignette showcases his top-notch promo skills. He’s nowhere near the title picture though; instead, his feud with newcomer Grayson Waller persists.

Diamond Mine vs Jacket Time and Odyssey Jones

For those unaware, Jacket Time is Ikemen Jiro and Kushida (who has now joined “clown school” as commentator Wade Barrett says). Granted, Kushida wipes out Diamond Mine amid his comeback, but Roderick Strong and the Creed Brothers regroup throughout picture-in-picture. Strong sells Jones’ comeback with oomph and ultimately eats the pin. An elite talent like Strong needs a better trajectory, and that’s undisputed.

MSK made it through airport security, despite carrying on their “supplies.” The low-budget sitcom continues as Wes Lee and Nash Carter search for the shaman.

Chase University’s own, Chase, actually survives a few minutes with Quinn. But Quinn reverses the momentum and hits the Jackhammer for three. Speaking of numbers, tonight’s second two-on-one beatdown comes from Joaquin Wilde and Raul Mendoza of Legado del Fantasma. But two becomes three and four when Santos Escobar and Elektra Lopez join the assault, attacking Quinn for saying “no” to her offer.

Raquel Gonzalez is interviewed backstage regarding her match tonight against Dakota Kai: “Make sure you bring that shovel, chiquita. Because I’m gonna bury you with it.”

Ever see No-Limit Texas Hold’em played inside of a wrestling ring? Well, the table, dealer, and camera angles are in place for Cameron Grimes and Duke Hudson’s game. Grimes, with a win percentage of literally 0%, ultimately tricks Hudson into folding, which results in a sick powerbomb through the table. Hudson grabs some scissors from underneath the ring and chops away at Grimes’ hair before furiously exiting. This was surprisingly an NXT 2.0 segment at its finest — that is, being both ridiculous and very well done!

The famous Smackdown superstar Von Wagner is back to handle business. He’s painfully uncharismatic, but he’s really, really big. O’Reilly’s here too (not for long), but his offense is stifled by the brawlers in Briggs and Jensen. Wagner makes the comeback though and secures the victory as the NXT Tag Team Champions Imperium watch from backstage. Just a little longer, Kyle!

It’s time for Lashing Out with Lash Legend with special guest Grayson Waller. He cuts the nastiest heel promo, talking down upon the independent wrestling grind and “DIY” veterans. “This business isn’t about wins and losses anymore,” says the absolute madman. He’s so punchable.

Indi Hartwell left Pirotta to herself because Dexter Lumis hurt his hand. But wait, it gets worse. The legendary Robert Stone, with an updated track record of three released faction members, is scouting ringside. Pirotta gets the victory and perhaps the curse of the Robert Stone Brand.

Dakota Kai is interviewed backstage about Raquel Gonzalez, staring into trances and twitching like a theatre student before Toxic Attraction makes their contracted weekly appearance. Good samaritans the Grizzled Young Veterans return their championship belts back, and for that, Zack Gibson deserves the lion’s share of Nan’s inheritance.

The NXT Champion Tommaso Ciampa is here to vent, but rival Bron Breakker interrupts with a fired-up message. Ciampa hits the line: “‘You’ve got less than a 33-and-a-third percent chance’ of ever taking this title from me.” It’ll be the first of many mathematical promos directed towards poor Bron.

Gonzalez dominates the opening minutes until she runs shoulder-first into the post. Kai targets the shoulder throughout picture-in-picture and onwards, but Gonzalez fights to make the comeback. The former champion showcases her amazing strength, but Kai whips her into the exposed bottom turnbuckle. Kai introduces the shovel, but Gonzalez steals it away before Toxic Attraction crashes the party. Mandy Rose, Jacy Jayne, and Gigi Dolin just can’t help themselves. Cora Jade and Io Shirai make the save, turning the main event segment into an awkward brawl. “War Games!” says Shirai. Oh boy.

Gonzalez-Kai was actually pretty good before Toxic Attraction forced the no-contest finish. There’s no point in complaining, because it isn’t changing anytime soon, but NXT has become a worse version of WWE’s main roster product. But hey, the Texas Hold’em segment was swell!