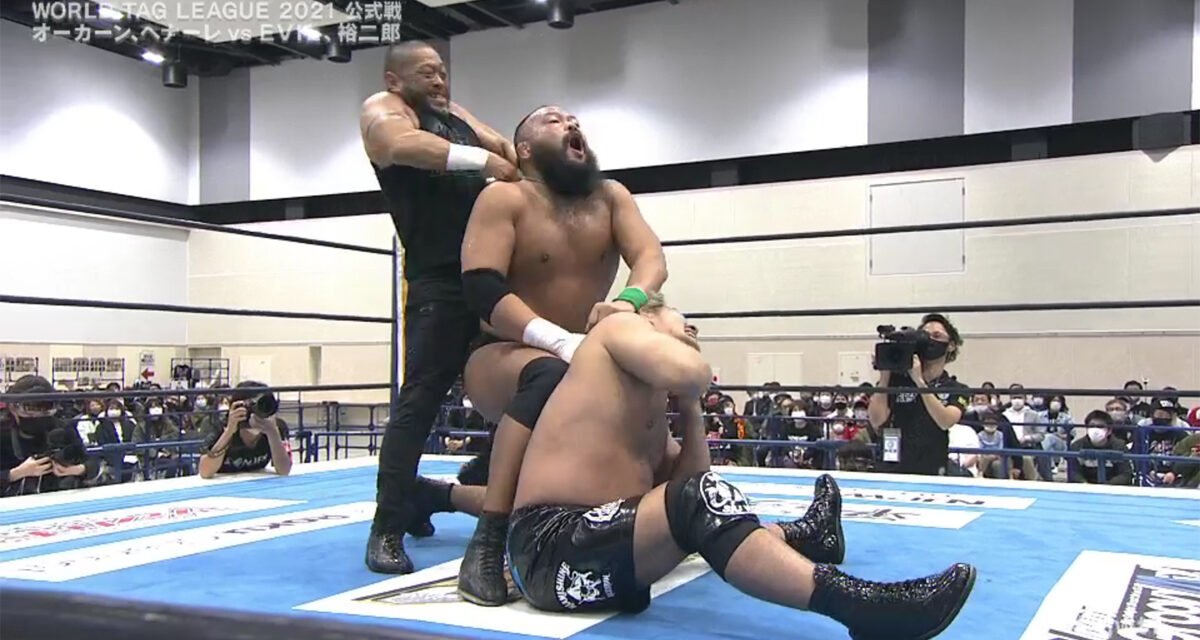 It is always weird when the bad guys become the good guys but that’s what happened at night two of NJPW’s World Tag League tournament as The United Empire took on Bullet Club’s House of Torture. The Great-O-Khan and Aaron Henare quickly became the fan favourites simply because those in attendance really, really, really hate Evil…and who doesn’t at this point?

Dick Togo got involved early tripping up Henare. As Evil distracted the official, both Togo and Yujiro Takahashi laid the boots to The Great-O-Khan on the floor. Togo jumped up on the apron where Henare greeted him with a punch.

Fighting fire with fire, Great-O-Khan removed the tag rope from The United Empire’s corner and used it to strangle Yujiro. Dick Togo climbed into the ring choking Khan with his garotte at the same time. Khan was forced to let go of Yujiro. Khan fought off Togo cleaning his clock with a punch.

Yujiro shoved Khan into the official taking him out of the equation momentarily. Togo snuck into the ring again using his garotte on Khan…again. Yujiro hit Henare with his cane and then Khan with it too. Evil slid a steel chair into the ring. Before he could use it on Khan, Henare super kicked the chair into Evil’s face and punched Togo in the “lower abdomen”.

Khan found a plank of wood under the ring, nailed Yujiro in the throat and back with it. Henare and Khan’s double stunner deal pinned Yujiro for the win.

What is it with these series of time limit draws? Is NJPW trying to send some kind of message? I don’t get it.

Tiger Mask kicks out of a powerbomb from Loa but taps out to a crossface submission.

Yoshi and Goto take out Kojima with a double-team and then pin Tenzan with their tag team finisher.

The Ace pins Honma with a High Fly Flow.

Winners: Aaron Henare and The Great-O-Khan

Owens is pinned with Zack Mephisto.