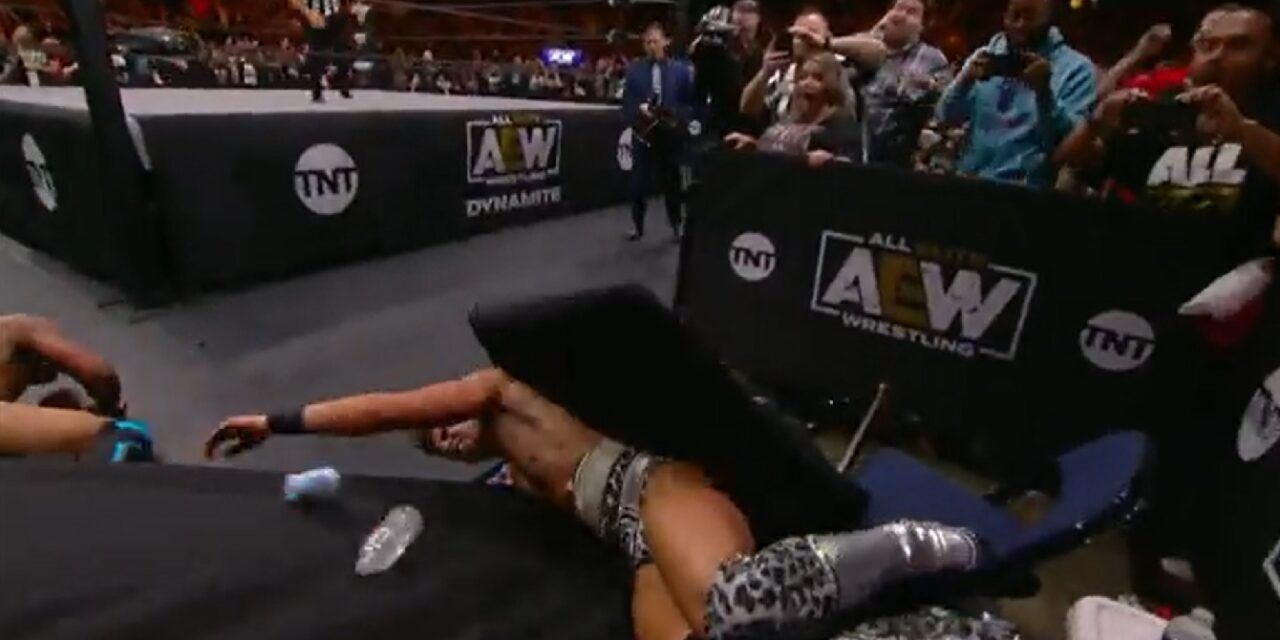 There’s been a changing of the guard in AEW. Wait, you didn’t watch Full Gear? Well then this is something of a spoiler, but there’s a new AEW World Champion, and he’s known to do some Cowboy S–t. The same show crowned his top contender, though, so there’s probably not going to be much rest for the Hangman, even in his home state. Let’s go live on TNT to see how the champ rides now that he finally has the gold.

Former AEW champion Kenny Omega sounds like he has some soul searching to do. While he makes some changes, he says he knows he can depend on the Young Bucks and Adam Cole to hold down the fort, which they promise to do, everyone speaking into the camera that Brandon Cutler is apparently holding.

It’s a much more festive atmosphere in the ring, where the Dark Order welcomes Hangman Adam Page. Though he doesn’t often spend a lot of time flapping his gums, Page says that since he’s now the champ, he can do whatever he pleases — and what he’d like to do is celebrate “National Cowboy S–t Day” with his bosses, the fans. Alas, the title comes with a lot of responsibility, and right now, that means the American Dragon, Bryan Danielson. The number one contender comes out to congratulate Page, but also admits he’s both surprised and disappointed it isn’t Omega standing across the ring. Page fires back that it’s because he kicked Omega’s ass, and he did it in less than 30 minutes. Danielson turns it into a bit of a “I wrestle all the time” thing, noting that when he won the world title at WrestleMania, he wrestled the next day. When the champ offers the title shot tonight, Danielson definitely leans toward a definitive heel turn by dissing Page’s outfit and making it seem as if Hangman would say he wasn’t ready if he lost. Page says Virginia is for lovers but he’ll still fight, and Danielson suggests again Page doesn’t really want to fight. Yep, he’s absolutely going heel for this feud.

My son just walked out and asked why Danielson is wrestling Evil Uno, and well, if he had just been out here one segment earlier, he’d know. The American Dragon is getting boos from the fans, so his turn is already progressing well. This is a hard-hitting encounter but relatively short encounter, and the announcers seem to notice the change in Danielson’s persona as he taps out Uno and doesn’t immediately let the hold go.

Hey, let’s really drive home Danielson’s heel status, shall we? Tony Schiavone goes to the ring to do just that, allowing Bryan to announce that he’s going to kick all of the Dark Order members’ heads in, starting with Colt Cabana in his hometown of Chicago next week.

MJF has no problem gloating about his victory over Darby Allin, saying he made everyone look like idiots for doubting his ability in the ring. He loved every single second of people chanting against him because they had to watch him prove how good he was. What’s next for MJF? We may find out tonight.

Maybe you don’t want to tease Eddie Kingston right after he lost to CM Punk, eh? Daniel Garcia and 2.0 do it anyway, interrupting his backstage interview segment, and they may come to regret it.

The Butcher and The Blade vs. Orange Cassidy and Tomohiro Ishii

Ah, now this is the good stuff, cementing the Best Friends’ membership in CHAOS. Announcers, please keep mentioning Kazuchika Okada and maybe he’ll show up, like a pro wrestling Candyman. I almost wondered aloud what Ishii would think of Cassidy’s hijinks until I remembered Toru Yano is one of his stablemates. Ishii vs. Butcher is what the fans really want to see, and Stone Pitbull doesn’t disappoint, dishing out ferocious strikes and a big superplex. Matt Hardy isn’t happy about any of this, and he and the Bunny both try to interfere. Brass knuckles are passed to Blade, but Rocky Romero prevents them from being used, and Ishii finishes things with his vertical drop brainbuster.

Schiavone talks to a frustrated Andrade El Idolo and FTR, who wonder if they can resolve all of their beefs with an eight-man tag match against Lucha Bros., Pac and Cody Rhodes. Ah, the fourth member of their team will be Malakai Black, right, right. Also, Tully Blanchard says he has one more match in him if Arn Anderson wants to go. Ayyy, that could be alright, honestly. Maybe?

A video package takes us back through the title match between Tay Conti and Britt Baker during Full Gear as Conti puts over the idea that she gained a lot of experience from her defeat. Afterward, Baker tells Schiavone she wants to direct the spotlight to future TBS champion Jamie Hayter, and even though the Doctor doesn’t like hearing Thunder Rosa’s name, she is confident Rosa will fall to Hayter.

Shida has an injured knee thanks to an attack on the Full Gear pre-show by Vickie and Serena Deeb, so watch for that to be the potential reason she loses this one and leads to a feud with Deeb, perhaps. The crowd is definitely behind her and wants no part of that. Guerrero ends up on the receiving end of Shida’s kendo stick, but that has slowed down the former champ and kept her from putting Rose away. I don’t like her chances all of a sudden. Sure enough, during the picture in picture portion of the bout, Deeb comes out and attacks Shida’s knee again. A nice sequence of counters leads to Rose getting Shida into a standing stretch muffler, and Shida ends up tapping out.

Black has a message of his own for the four faces his buddies challenged earlier. His is a little more stylized than most, let’s say.

No one seems jazzed about MJF coming to the ring, even after Shawn Spears tries to get them to be quiet. MJF says he is “easily” the most complete wrestler in the world and no one in the locker room is on his level. Who will beg to differ? How does CM Punk work for you? The fans take a moment to drink it all in before MJF offers a handshake. Punk just laughs and walks out, leaving MJF looking perplexed. Th silent treatment might work to get inside his head, for sure.

Geez, someone give Schiavone a break. Allin tells him he isn’t taking any time off and wants the biggest and baddest in AEW, which turns out to be … Billy Gunn? Screw it, let’s do it, Allin says.

Cole is really tired of Jurassic Express and Christian Cage, and the Bucks aren’t cleared for action yet. So that means Cole and Bobby Fish will take on Jungle Boy and Jurassic Express on Friday, and the Jacksons stop Fish before he can say that’s undisputed, presumably.

Dante Martin and Lio Rush vs. The Acclaimed

Martin was the target of Team Taz last week, which is interesting since Rush sort of stole him from Matt Sydal. The announcers think he and Rush are already a good tag team, but are in for a test against The Acclaimed. The fans are definitely digging what Rush is doing in the ring tonight, chanting for him like my friend Jack Crosby probably is right now. The other team can go too, and the “this is awesome” chant rings out. Some great teamwork sets up a frog splash for Rush, and that’s all she wrote for this one.

Team Taz comes to the stage to make another pitch to Martin, and their claim that they are patient is backed up by the fact that they waited a long time for Powerhouse Hobbs to decide to join them. Ricky Starks says the decision could be the difference between a hall of fame career and a mediocre one, and the choice is his.

Cage and Jurassic Express are definitely up for the challenge of Cole and Fish, with Jungle Boy saying the change inside him is here to stay, unlike his facial hair. Next up is a video package promoting the showdown between Red Velvet and Jade Cargill.

Through Alex Abrahantes, Penta says FTR was too pathetic to take him out when they had a chance, and Rey Fenix adds that Death Triangle and Rhodes are the best four-man team in the universe. Several solar systems away, someone just threw something in outrage.

Tony Nese has now entered full creeper mode as he is in the front row watching again. There’s a sign or two of respect in the evenly matched opening, leading to a “this is wrestling” chant. Lethal has no problem targeting Guevara’s injured ribs, and the fans are now split between both men, or seem to be from their chants. The ringside doctor even checks on Sammy, but of course he wants to keep fighting and takes it right back at the challenger. Guevara is able to catch Lethal on his way out for a tope suicida and give him a brainbuster on the floor, which is effective at evening things back up. Alas, with Lethal positioned in front of a table, Guevara goes for a somersault senton from the top turnbuckle and crashes and burns. Lethal misses on an elbow drop as well, so it’s anyone’s game. The fans would like them to fight forever, but hockey is coming up soon, so someone needs to win here. Guevara crashes home a big knee to the head, then another and signals for the end. He connects on the GTH and retains.

The Inner Circle comes out to support Guevara, and Lethal accepts Guevara’s handshake and raises arms with the group. That’s a satisfying way to end this Dynamite, so we’ll see you in seven.

As post-pay-per-view shows go, this was a good one, with Dynamite leaning on some strong matches and sprinkling in just enough forward motion on the most important storylines. Many are continuing on from Full Gear, but Danielson’s new attitude is noteworthy on its own, and MJF-CM Punk has a lot of potential. Lots to look forward to for the rest of 2021.