Looking back on my CWF Legends Fanfest trip 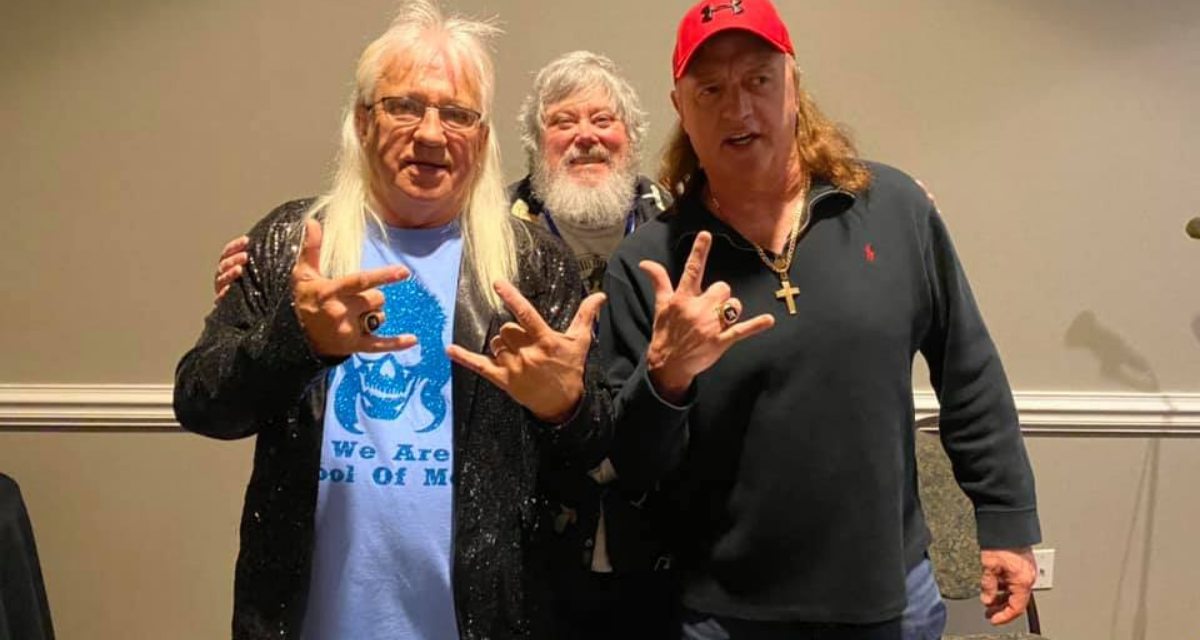 Now, a weekend removed from my trip to Lutz, Florida, for the CWF Legends Fanfest, I’ve had time to reflect, and catch my breath.

Wrestling fans started arriving Thursday, November 4th, for the seventh installment of the CWF Legends Fanfest, at the Residence Inn by Marriott Tampa Suncoast Parkway. The event is the brain child of Florida historian Barry Rose and former WCW ring announcer David Penzer. I’ve been friends with Barry since 1978 during the WFIA convention days.

By Friday, most of the out-of-town fans had arrived for a night of friendship and storytelling. Some took the traditional trip to Portillos for its famed Italian beef sandwiches, while others gathered at the across the parking lot at Glory Days. Eventually everyone ended up at Glory Days for a night of drinks and stories — many stories were courtesy referee turned manager Bill “Fonzie” Alfonso.

A late night didn’t slow anyone down for the Saturday main events.

If you never have attended one of the CWF events, they are purposely small, with only 125 attendees and the chance to spend more time with the legends. The event opened with Memphis wrestler/promoter Jerry Jarrett telling stories and answering fan questions from everything to Memphis booking to his living next to country singer Bobby Bare. Jarrett told a funny story about going to Las Vegas with Bare and, after being up thousands,  they lost it all and had to scramble to get money to get home. He shared the expected sales of some of the biggest angles in Memphis history and Jerry Lawler. 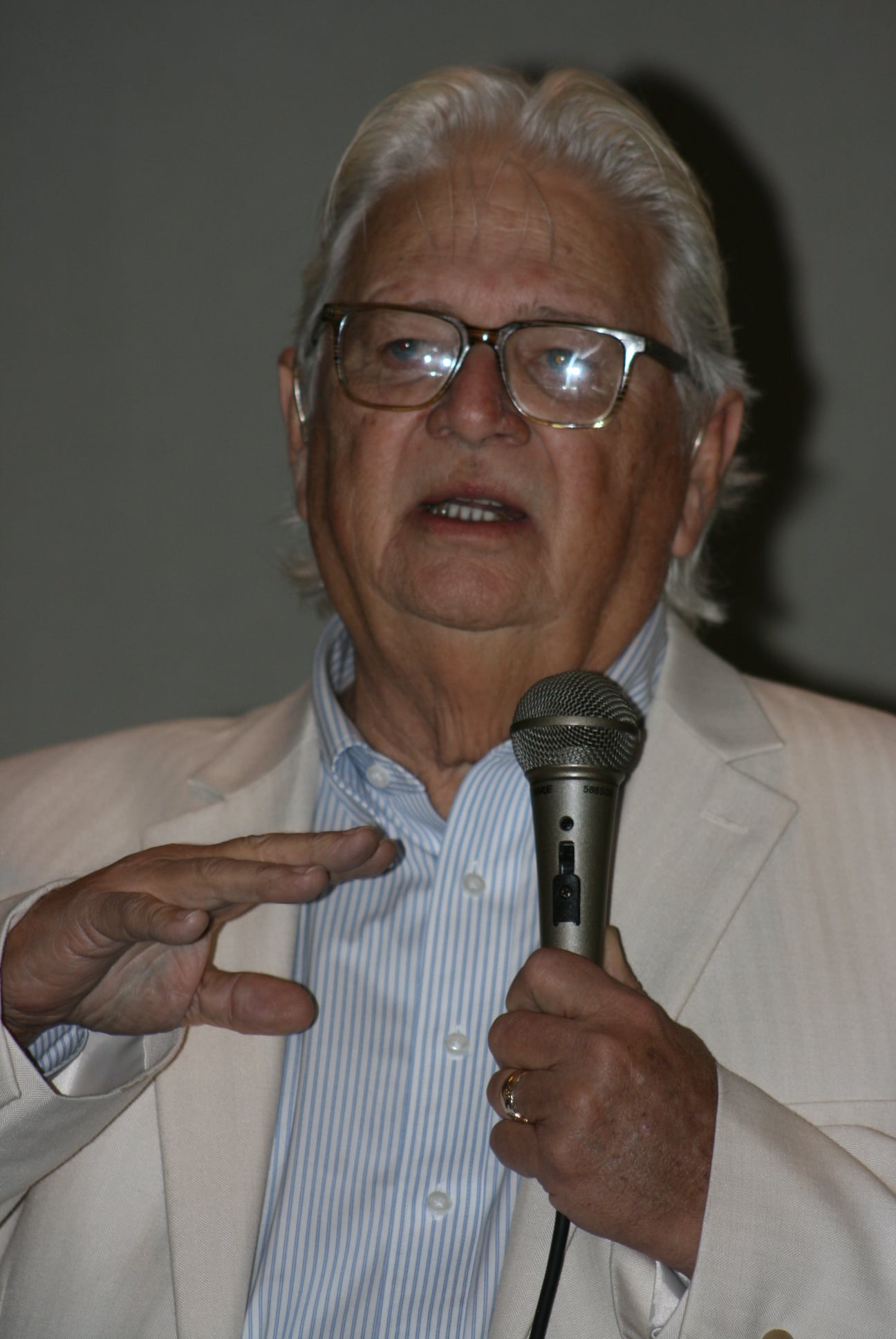 Unlike many of the bigger fan fests, there really are no lines and everyone could spend all the time they wanted with the attendees. Your fan fest fee gives you more tickets for autographs and photos than most of the fans could use. There were plenty of vendors selling old magazines, posters, photos, videos and books, action figures and comic books.

Barry Rose has a podcast called Breaking Kayfabe with Jeff Bowdren, and Jeff was selling his books and photos for Pete Lederberg, who was unable to attend.

Photographer Duane Long offered a deal to print of a 5×7 photo that you just took to get autographed while you waited.

The Rock ‘n’ Roll Express (Ricky Morton and Robert Gibson) had the biggest line but everyone got all the time they needed. 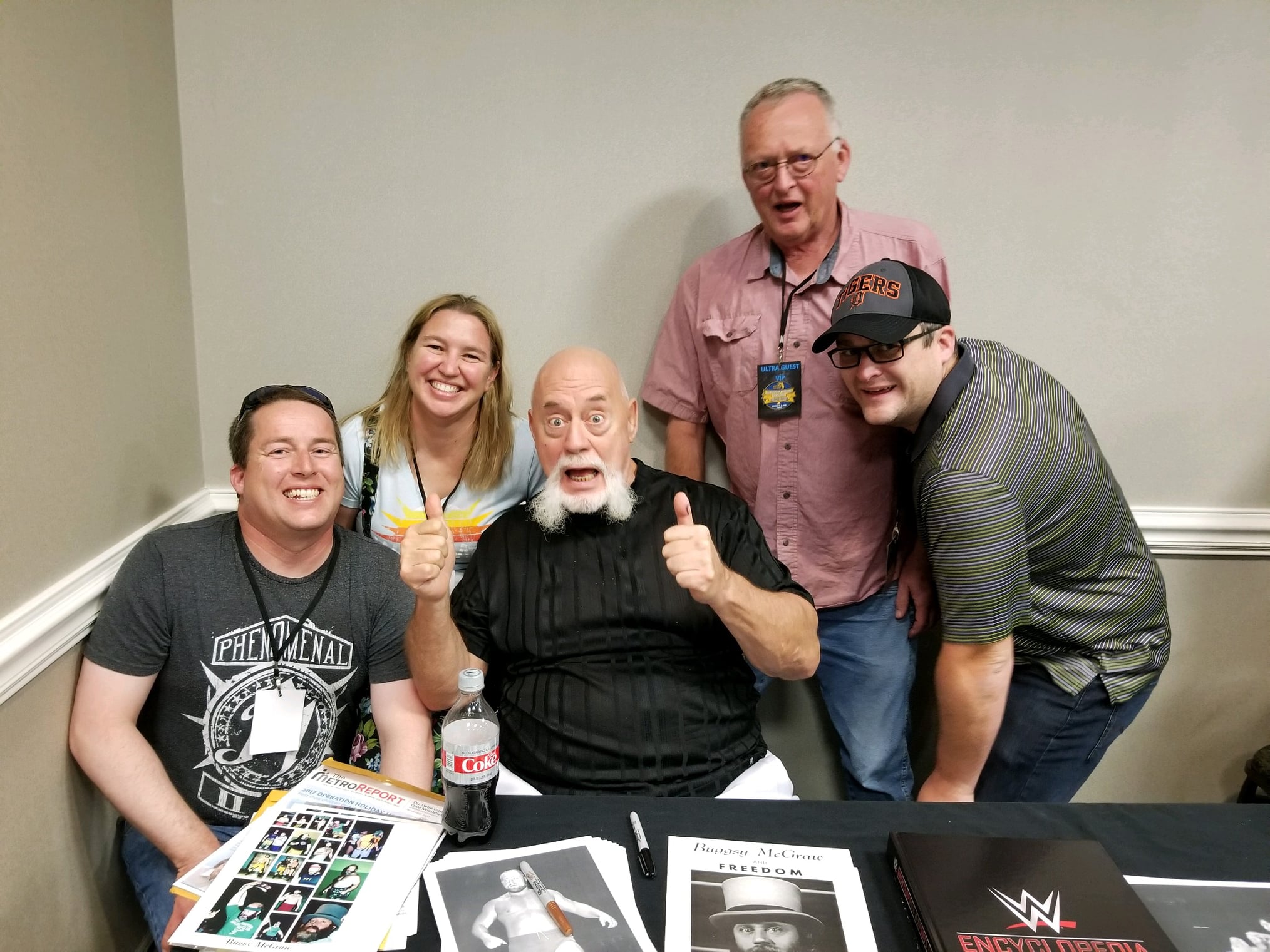 Bugsy McGraw and some fans.

Florida legend Bugsy McGraw was popular as well,  and Bugsy is a real unique character and love to chat with his fans.

Jerry Jarrett sold out of his books, and was very good with every fan, many of whom had never had a chance to meet him, since he rarely got down to Florida during his career.

“The Grappler” Len Denton made his first appearance and was popular. 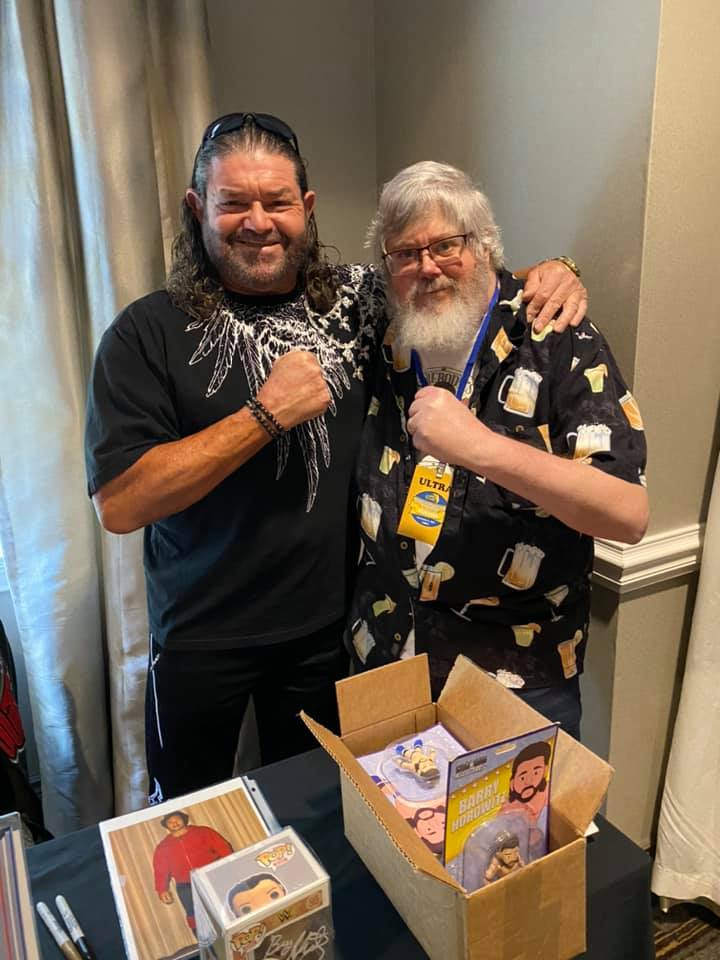 Barry Horowitz was one of the newer stars to appear, everyone seemed to want a photo with them slapping their back next to him.

“The Cuban Assassin” David Sierra is always gracious to the fans, he appeared both with and without his mask on. 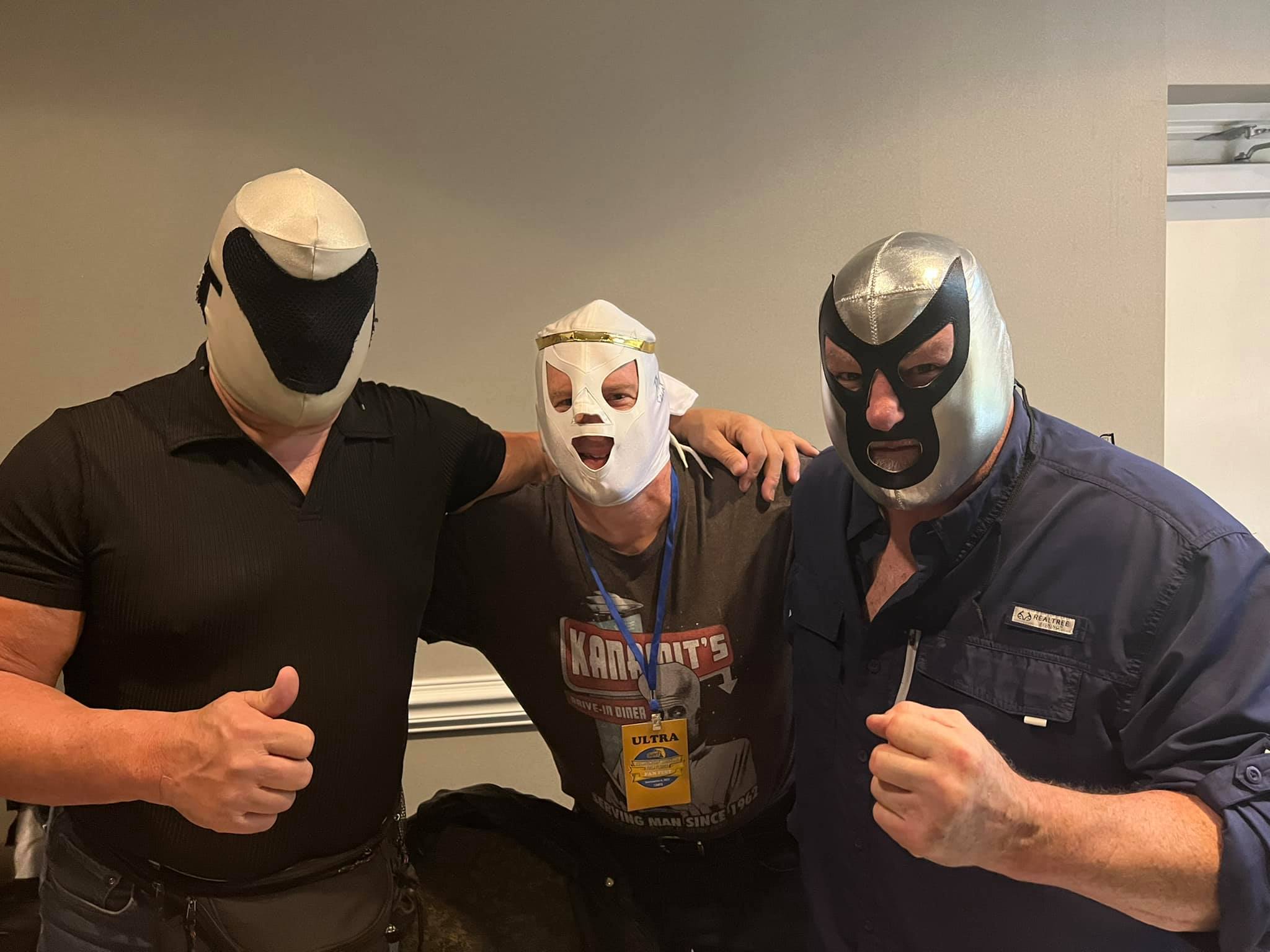 A masked Cuban Assassin, a masked fan, and a masked Grappler.

A extra surprise guest Denny Brown also was happy to meet his fans. Denny was happy to share his fishing photos of big catches he recently made with Mike Rotunda and Barry Windham off the Florida coast.

Jerry Brisco, who lives minutes away, also was great to talk with — though I now owe him a six-pack from football bets gone bad over the past three years. 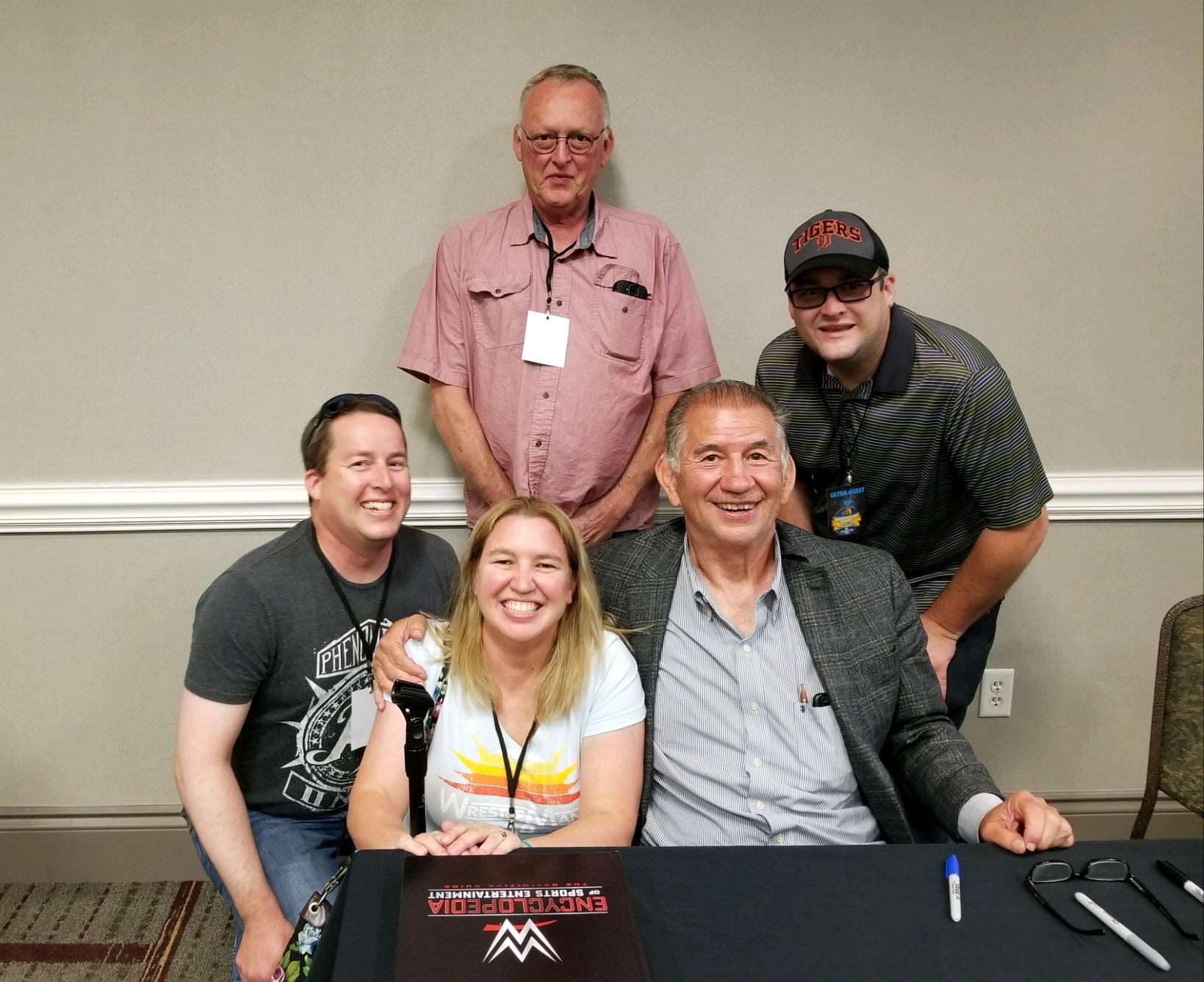 From 12:30 until about 3 p.m., fans talked with the legends as well as extra guest Bill Alfonso, and some wandered over to Glory Days for lunch or any number of close by spots; others just sat in the lobby and watched football or talked wrestling. I sat with photographer Howard Baum, whom I’ve known since the early 1980s, and Benjie Fido, Neily  J, and Randy Rusk, all of whom I met in 2019 and became life-long friends over wrestling and good music — and that is despite Neily’s love of really bad beer.

At 4:30, p.m, the next Q & A with the Rock ‘n’ Roll Express started and fans had lots of questions which Ricky and Robert weren’t shy to answer. The Rock ‘n’ Rolls delighted the crowd with funny and serious stories of matches and the road. Robert also shared stories about his start and his late brother Ricky Gibson. Morton talked about growing up in the Memphis territory and his dad being a referee there. A smart-mouthed fan asked what town had the best “arena rats,” meaning the fans that wanted to sleep with the boys. Morton danced around the question saying it was a different time in the 1980s and they were young and having fun, and he never slept with another man’s wife… that he knew about in advance. 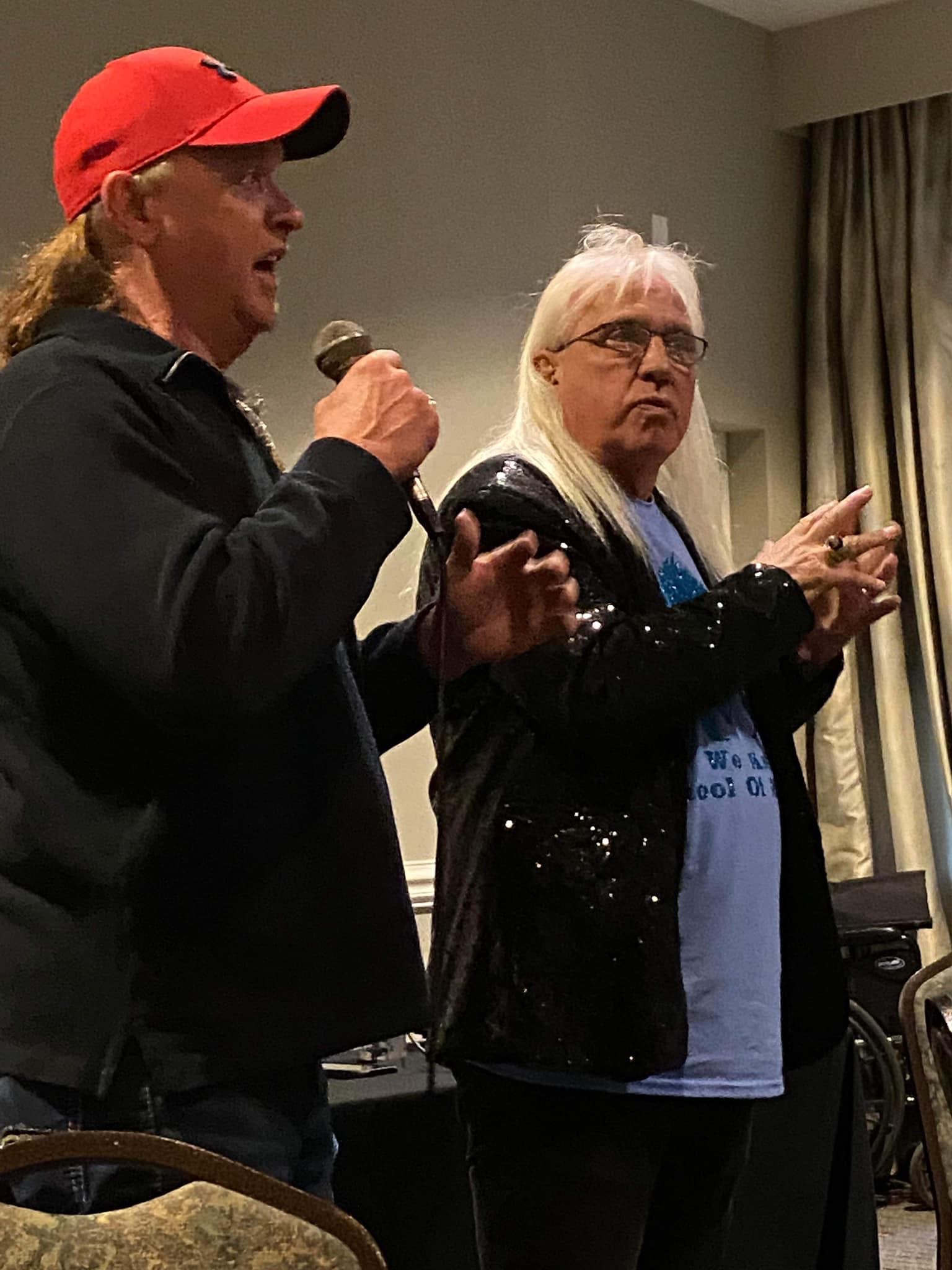 The late night show was Len Denton sharing his road stories in a comedic and multimedia style format. Len has a great personality and pulled no punches in his stories.

Afterwards the crowd poured back into Glory Days for more fellowship, drinks and food. Even after that cleared out, the crowd filled the entire lobby and breakfast area for even more wrestling talk, as well as some music.

If you’ve never attended one of Barry and Dave’s CWF Legends Fanfest events, don’t miss the next one, booked for June 4, 2022. Guests already announced are Demolition (Bill Eadie and Barry Darsow) and Madusa Micelli.

There is a lot to be said for such an intimate setting and the time you get with each legend is better than the mega-conventions where the lines are long and some guys don’t have time to look up as they sign autographs. Overall, it was evident that the organizers and their staff and volunteers worked very hard to make this event fun and memorable for all who attended.

I’m a part of a very dedicated core group that make this a return event year after year; so needless to say, June 4th is on my calendar for next year’s event!