Dinner with the legends turns into a book

In many ways, Jeff Bowdren is a pretty ordinary guy. He has worked at the county courthouse in Fort Lauderdale for over thirty years, with a wife and two kids. But on the side, he’s been meeting up with some pretty interesting people, and recording their conversations at lunch or dinner. Those transcripts of his experiences with some of the legends of professional wrestling are the meat of his first book, Breaking Kayfabe.

Bowdren, 55, has been a fan of pro wrestling since the early 1970s. His grandmother was an even bigger fan, and brought him to the matches at the Civic Center in Savannah, Georgia. The main event that night has stuck with him: Bobby Shane and Doug “The Professional” Gilbert versus The Assassins (Jody Hamilton and Tom Renesto). 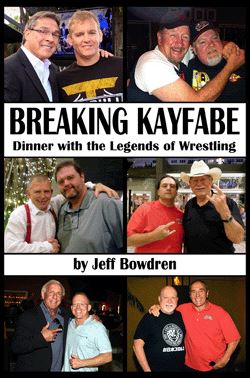 His eyeopening moment, however, came when Bowdren’s mailbox started filling up with copies of the Wrestling Observer Newsletter in the summer of 1986. All of a sudden a wider world was opened up.

“I met some guys on the Florida circuit and became friendly a couple of years later with the guys who were locally producing the Global Wrestling Federation show,” recalled Bowdren. “Guys like Bob Roop, Rusty Brooks and Boris Malenko. The way I describe it in my book is that all these people were ‘links in a chain.’ Meeting one guy caused me to meet another … and so on and so on. It was the same with the wrestlers themselves and the hardcore fans, you know? I met Dave Meltzer and through him I met Ron Lemieux and Bruce Mitchell and John Hitchcock and other guys.”

As his circle of wrestling friends grew, so did his interest in the inner-workings of the mat game. Bowdren couldn’t believe that he had a chance to visit with so many wrestling stars, his home in Florida being close to so many workers of the past and present.

“There were a few that I had before on a fairly casual basis, but to actually get to sit with these guys and to interact with them on a more personal basis, is a real dream for someone who considers himself a fan/historian/writer,” said Bowdren.

The idea of Breaking Kayfabe: Dinner with the Legends of Wrestling is to preserve the stories of the past. Bowdren had been posting his interviews to Barry Rose’s Facebook page on the history of wrestling in Florida, and that lead to interest from Scott Teal, the man behind Crowbar Press.”One of the things that Scott Teal, who is my publisher, likes to say is that as we lose the stars of the past, we lose all of those stories that they had,” explained Bowdren. “I am also a huge movie buff, and my favorite movie of all time is Blade Runner. There is a scene at the end of that film where the lead heel in the movie, played by Rutger Hauer, is dying and he reflects on all the things he had seen in his life that will be ‘lost … like tears … in the rain.’ One of the things the dinners do is to preserve all those stories so they won’t get lost.”

Teal, who worked in the Florida and Nashville wrestling offices at various times, offered up a pair of reasons for publishing Bowdren’s interviews: “One, I thought they were really interesting and, two, I’m a big mark for information about wrestling in Florida since I cut my teeth on wrestling there in the late ’60s, early ’70s.”

Bowdren and “The South Florida Marks” were a group of friends that grew to include Dan Lambert, Robert Mitchell John Menhennet, Bob McKeon, Greg Goode, and Duane Long, and they tried to get together for dinner with a particular wrestler.

Asked about a favourite interview, Bowdren wavers.”The great thing about the dinners is that each guy has their own particular favorite, and it might be for a completely different reason,” he began. “Some guys loved Steve Keirn because of his funny stories about playing ribs on other guys, and some guys loved Terry Funk from an historical perspective.

“I loved Stan Hansen because I was a huge fan of Japanese wrestling in the ’80s. But my own favorite was Ricky Steamboat. During the dinner, Ricky shared with us the story about his Japanese mother reconnecting with her family on one of his tours of Japan. It wasn’t a wrestling story, but it seemed very personal and I felt like he was really sharing something with us outside the norm.”

The flipside were sit-downs with Mick Foley and Ric Flair that didn’t go too well. “Mick kept steering the conversation back to today’s WWE product, which quite frankly most of us aren’t interested in. Ric sat down at the table, looked at his watch and said, ‘Okay, you’ve got two hours.’ He just made it seem that the whole experience was a real inconvenience for him. And you know what? If that’s the way you feel, that’s fine. But don’t take the gig then.”

A wish list of future guests with ties to Florida would include Dick Slater, Don Muraco and Michael Hayes of the Fabulous Freebirds, meaning that Bowdren is still hopeful that the dinners continue — especially because he’s only four years away from retirement from his day job.