From being a young kid with a severe speech impediment who watched Dick The Bruiser’s Indianapolis territory to becoming a main event wrestler for many territories, including selling out Madison Square Garden with Bruno Sammartino, Buggsy McGraw’s autobiography is a revealing portrayal of his wrestling career.

Before he became the legendary Buggsy McGraw, Michael Davis grew up in Indianapolis and was a fan of the NWA territory when Jim Barnett was the promoter. The main attraction of the territory in the 1950s was Dick The Bruiser, which Davis talked about incessantly. The book, Brute Power: The Buggsy McGraw Story, does a great job of detailing what professional wrestling was like in the 1950s in Indianapolis. 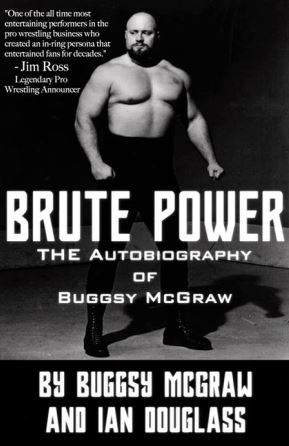 Unfortunately for Davis, the second territory he worked was unpleasant to say the least.

“About a year into working for the (Original) Sheik he sent me to Calgary. So, I went to Calgary and went through all kinds of hell. It was really, really cold weather. It was one of the worst winters they had and the window on my car shattered and then once I got to Calgary and went to the hotel, I parked my car and in the morning my car wouldn’t turn over. Absolutely no sound,” Davis told SLAM Wrestling. “I found out that you had to get a freeze plug so I had to get my car towed in and get a freeze plug otherwise you can’t run your car. The trips were really, really long. Money was not that good so I was miserable. No money, long trips, and extremely cold.” McGraw’s autobiography has many other entertaining stories about his unhappy time in Calgary.Davis’ luck changed after he called the Sheik to get him out of Calgary and send to another territory. He packed his bags for Florida, where the weather, travel, and money was better.

However, even with the improvements over Calgary, the booking in Florida was out of touch and behind the times.”When I got there the guy who had the book was Buddy Rogers and he was a disaster, a true disaster. I had always been told by a few people to never trust him and I never did trust him. He went in there to take the book and the promoter was Eddie Graham and Eddie Graham told him, ‘You are going to take the book, it’s your job, that’s it. You do not work in the ring,'” recalled Davis. “Well, if you read my book you are going to see that Sonny King told me, ‘I’ll get Rogers to work.’ And I said, ‘No way is Rogers going to work. He’s already been told, you do the book, you never get in the ring to work.’ And sure enough in maybe three to four weeks Rogers was in the ring working and Eddie Graham didn’t like it. So he got fired.”

“Then they brought in the Dream, Dusty Rhodes, and he took the book and did an excellent job. In 1979, we were wrestling for Florida, working in the Tampa office and he had five shows that were the same every week. We worked the same towns every week. Week in and week out. Every time we drew that year, every week we either had a packed house or we had a sell out every night, the whole year long.”

McGraw started outshining Rhodes and Rhodes protected his spot on the card by holding McGraw down. “If he perceived you as a threat that could be a problem,” said Davis.

New York is another favorite territory that McGraw worked. McGraw and Bruno Sammartino sold out Madison Square Garden. “I really liked Bruno Sammartino. He was really nice to me and he was looking out for me.”

In contrast to the caring Sammartino, Vince McMahon Jr. shorted McGraw on his paycheque.

“We went to New Haven, Connecticut. That was a fair size town. They didn’t run that a lot but we went in there and we had a really good crowd. Usually, when you work under Vince Sr., when you work a town, a week later you get a cheque on that particular town. You got individual cheques for each town usually. So we waited a week, we waited two weeks, three weeks — no cheque; four weeks, no cheque; five weeks, no cheque. Then after six weeks we got our cheque. Well, I was expecting a lot more than I got. The crowds were really good. It was a larger place and I got $100. Lou Albano had the scoop on that. (Vince McMahon) Jr. was involved with some shady guys. I don’t know if they were the mafia or not but anyways, they wanted their money and they wanted it now. So he went into the box office and he took half of all the money in New Haven that same night so that he could pay his debt. So I figure that I should have got roughly for that night $500 plus interest. So I figure he owes me well over $3,000,” said Davis.

The book, Brute Power, does a great job of following Davis’ career from a young inexperienced wrestler to a main eventer at Madison Square Garden in New York. As you turn the pages, you can see Davis’ growth as a worker increasing. One particular wrestler that helped McGraw was Killer Karl Kox.

“My real confidence came after I went to Australia. My first trip down there, I think it was 1970. I was working down there and the promoter down there was Jim Barnett. They brought in Killer Karl Kox. Karl Kox was a real master. We were tag team partners and I learned a lot from him and also from other guys from time to time too. I knew that I wanted to learn because I wanted to be successful,” said Davis. Although, not everyone had a willingness to learn or better themselves. The book gives great details on wrestlers that Davis did not learn from because they refused to adapt their style.

In addition to McGraw’s journey in professional wrestling, the book also provides a lot of the history in each territory that McGraw worked in. This allows the reader to learn about each territory’s history and understand the environment Davis was working in during his personal journey.

“I became interested in the project after looking into a little bit more of Mike’s career, realizing that he wrestled in Detroit, which is where I grew up, and he also had an extensive career in Florida, which ties right into the work I was hoping to do on the Bahamas. On that basis, I agreed to help him with his autobiography and it was a thrill to be involved with the project,” Douglass told SLAM Wrestling.

With the initial release of this book there is a lot of positive feedback. “I think it’s a testament to just how much the territory system has shaped how wrestlers are viewed or came to be viewed. In terms of modern popularity, obviously he wrestled as the Brute, he wrestled in Australia, Nebraska, Georgia championship wrestling, the Maritimes, Oregon, Vancouver, and in nearly all of those cases he would be a heel main eventer. He had a substantial run as a main eventer in Vancouver as the top box office guy. They sold t-shirts for him when they weren’t selling t-shirts for the babyfaces.”

“If you saw him as the Brute or even if you saw him during his run in Florida, initially when he was a heel, you have a hard time thinking of him as anything other than a top drawing heel or a top drawing figure. Whereas if you saw him toward the tail end of World Class Championship Wrestling where he was this child-like character or your first exposure to him was when he was in Mid-Atlantic, dancing around teaming with Jimmy Valiant, you tend to view him more as this clownish buffoon character. That’s really unfortunate because the majority of his career was as a cruel, physical, big bumping heel and that’s lost on the present generation,” said Douglass.

The transition of McGraw from a monster heel to a comedy wrestler is another theme in the book that McGraw gives an in-depth explanation on. There are many stories in the book that I have not heard before. Unlike some other autobiographies that do not pull the curtain far back during their time in the ’60s to ’80s, McGraw’s autobiography pulls the curtain back on the wrestling business during his time where kayfabe was enforced.