Grappler’s story makes him the ‘Forrest Gump of wrestling’

Through the years, a lot of people told Lynn Denton that he needed to write a book about his days as The Grappler. A great storyteller, with a yarn about just about everybody, he finally found his co-writer in Joe Vithayathil, a veteran TV news reporter in Portland, Oregon.

Together, they weaved Grappler: Memoirs of a Masked Madman, a self-published tale that takes Denton from humble beginnings in Humble, Texas, to reigning as the North American champion in the hot Mid-South territory, to down days eking out a living, to his long stay in the Pacific Northwest.

From conception to completion, the book took about 15 months, said Vithayathil. 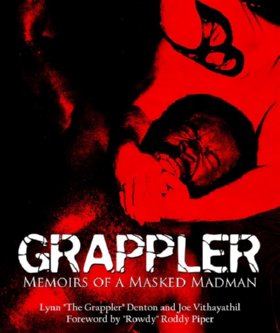 “He reminded me of the Forrest Gump of wrestling; if you’ve ever seen that movie, Forrest Gump was a simple guy … that was always at all these major places, historical moments with major figures. Lenny was kind of like that,” said Vithayathil. “When Harley Race was fighting Vince McMahon for his life, Lenny was his booker. When the Portland territory was on its last legs, Lenny was there. Right before (Ric) Flair won the title, he was driving him all over the Carolinas. It was just an interesting perspective.”

Though he had his time as a headliner, Denton is far from a nationally-known name; even when he was in WCW, it was on the secondary shows — unless being a part of Goldberg’s win streak counts.

He’s proud of what he did in pro wrestling and of being able to share his tales.

“What I wanted to show was what the guy in the middle of the road in the territory days, just the trials and the things he had to go through just to stay there, to keep a job and hit that level … just somebody that really had to pay their dues and work their way through it. There’s a lot of us,” said Denton.

In the book, Denton never comes off as a know-it-all.

“He’s a humble guy, which is one thing I tried to instil in this book. Here’s a guy who had a nice career, but keeps things in perspective,” said Vithayathil. “Like wrestling isn’t his whole life, a); and b) his accomplishments that he did have, I think he keeps those in perspective too. … He’s not a guy to brag.”Vithayathil and Denton would sit down and go through periods of his career with the recorder on, and it was a learning experience on both ends. Vithayathil found out all kinds of things about Denton, and because he had researched so much, “Joe V” managed to resurrect old memories buried in Denton’s mind, reminding him of things that he had forgotten. 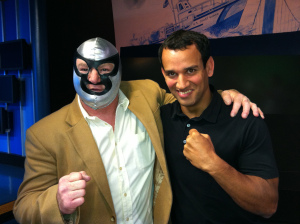 The Grappler and Joe Vithayathil.

For Denton, the more personal parts of the book mean as much as the wrestling aspects.

“Joe’s a good writer, because I’d have tears in my eyes, when he’d be talking about my mom or my dad, or my brothers whom I haven’t seen in forever,” said Denton. “It touches you in all those places.”

Denton is now in the process of getting copies out to his family. Already, his sister Sandra has threatened to make the media rounds if she takes issue with anything he wrote. She is three years older than Lynn, and he chuckled at one particular memory from when they were teenagers. “We got into a fight in the kitchen, and she got a headlock on me, and I could not get out of it. So my sister beat me. I could have punched her, but who hits their sister? What kind of guy does that? … She never lets me live that one down.” Grappler is equally readable for hardcore fans or newbies, and that was by design. “As far as the book goes, we tried to make it so that everyone could understand it, whether they were a first-time fan or what, and try to get the drift of what was going on,” said Denton.

And the way that Denton tells stories, Vithayathil isn’t ruling out another project down the road. “There are stories of Lenny that I’m only just now learning. He’s got so many of them,” he said.