Hitman Hart DVD flashes back to WWF of 1992

The latest offering from Kayfabe Commentaries, The History of the WWE – 1992 – As Told By Bret Hart, is an interesting tale that provides nuggets of information that the casual fan would find very interesting. Host Sean Oliver leads Bret Hart through one of his most important years in professional wrestling which saw “The Hitman” win not only the Intercontinental title, but the biggest prize of them all, the World championship. 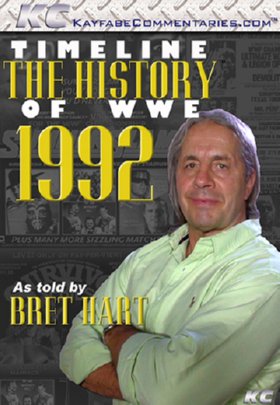 Early on in the 135-minute DVD, Hart opens up about the effect the steroid scandal had on the wrestling business at that time. He felt that attendance certainly dropped off as a result of the scandal and the ring attendant sex scandal that would follow.

Throughout the show Hart talks a lot about Shawn Michaels. From the breakup of the Rockers to the rivals having the first ladder match in WWE history together, Hart has glowing remarks for the young Michaels declaring that Curt Hennig and Shawn Michaels were the two best athletes in the WWE at that time. We find out that if Summer Slam 1992 would have been hosted in North America the Hitman and the Heartbreak Kid would have premiered the ladder match on pay per view.

The video moves systematically throughout 1992 stopping at each major event or happening along the way. Sometimes these moments move Hart to pontificate about the backstory and at other times he has little or no comment about the situation.

Many of the topics touched on in this time capsule interview can be found in Hart’s book where he covers them in detail. At times Hart comes off as a person who is not a talker. In fact when asked about his and Vince McMahon’s relationship when he first won the World title Hart said that his boss wanted him to phone every day. Hart admits that he is not the type of person who phones someone just to talk to them and he eventually just stopped phoning his boss because he didn’t know what to say.

Oliver’s preparation and detail for hosting this interview was obvious. His questions were thoughtful and kept the interview moving in a smooth direction. Some of the more revealing parts of the interview were Bret’s thoughts about different wrestlers from Hulk Hogan, to Ric Flair, Jacques Rougeau, Papa Shango, Xanta Klaus and Davey Boy Smith. It is revealed that The Underataker loved working with Hart because he would be able to showcase his wrestling abilities instead of fighting immovable monsters each night.

While much of the material has been written about in Hart’s book, and elsewhere, it is interesting to see his emotional reaction to the subjects. In fact, Hart becomes quite animated when discussing how he visualized, created and executed his Wembley Stadium match with his brother in-law. He described the match as one of the greatest in wrestling history.

A funny segment has Bret Hart relating his experience recording a song for the WWE’s Slam Jam record which was produced by Simon Cowell. It turns out Cowell wanted Bret to sing his song, but the wrestler insisted he talk the lyrics instead. When Cowell finally coaxed the Hitman to sing he said to the pugilist that perhaps he should in fact just talk.

The History of the WWE – 1992 – As Told By Bret Hart is a captivating documentary that gives you a thorough understanding of the life of Bret Hart at that juncture. While it is a lengthy show it is certainly worth the watch to any wrestling fan interested in the history of the WWE during that time period.