NWA’s Byron Wilcott all about giving back

NWA North American Champion Byron Wilcott is — and always has been — a champion for the underdog. But now, with his stature in the wrestling industry, he spreads that philosophy through outreach opportunities with the nation’s youth.

The 6-foot-5-inch Wilcott, of South Beach Miami, Fla., by way of Shreveport, La., has been spearheading the “Say NO to Bullying Campaign” under the NWA name since May, something his cousin and fellow wrestler Jerome Daniels said Wilcott has “believed in his entire life.”

“He has his view like he’s a bigger guy, he was born that way, [but it] doesn’t make me better,” Daniels said. 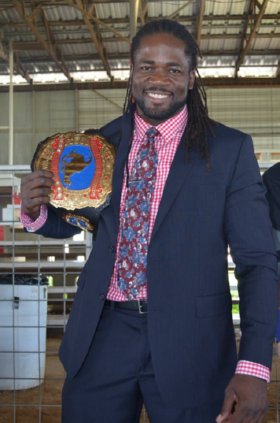 People thinking being different is grounds for bullying offends Wilcott “on a certain level,” according to Daniels.

“But he tries to find non-violent ways to go about it,” Daniels said. “I’m all behind it. It’s an honest thing for him.”

This work, Wilcott said, is his way of “giving back to the community” and getting children involved.

“[You] see a lot of stuff happen like with the Columbine shooting, the Batman theater shooting… [and] I don’t necessarily know what’s causing all that. It wasn’t like that,” Wilcott said. “Now, it’s a real worry.”

Some people, according to Wilcott, blame such events on “people not knowing how to cope with bullies or feeling depressed or feeling pushed in a corner about bullying.” And that’s why NWA Main Event raises awareness of the issue.

“One way my company can stop that from happening — or at least persuade it not to happen — is by telling kids who are being bullied different ways of coping to deal with it and how to prevent it,” Wilcott said.

Franco D’Angelo, who has known Wilcott for nearly a decade, said the anti-bullying initiatives go “hand-in-hand” with what the nation’s schools are doing. Though D’Angelo said it “sounds a little counterproductive” using a violence-based product to spread such messages, it also shows that people can act a certain way as a job requirement, but it is not a true reflection of how people should act.

“I think it’s great what he’s doing,” D’Angelo said. “I think that he has a platform right now, and you if have a platform like that you need to use it for something good.”

Sometimes, children who are bullying don’t realize that’s what they’re doing, according to Wilcott. They may think it’s “just jovial fun,” not realizing some children take the joking personally and are hurt by it. But Wilcott also contends that current society “is a little softer than it was 20 or 30 years ago.”

“Things are more politically correct. Some things are nicer… but then also I think people’s skin is not as thick as it used to be so things get to people more,” Wilcott said. “So, I think everybody has to be educated on that.”

Wilcott’s venture into the NWA truly began three years ago with NWA Houston when owner Chris Ronquillo was looking to add talent to the roster. Scott Summers, the champion at the time, suggested Wilcott, and the duo had two matches. Then after a two-month break from the company, Wilcott returned and hasn’t missed a show since.

“Once I got in just kind of embraced it, started trying to push NWA as much as I can in the media and anything I do,” Wilcott said. “I was allowed to hop on the horse, and I just started riding, you know. Like, give me the reins.”

Daniels said Wilcott is “one of the most inventive, innovative” wrestlers today.

“His creativity is like second to none,” Daniels said. “He’s one of the most creative wrestlers of our generation. And he just knows how to get the job done.”

D’Angelo said Wilcott’s passion for professional wrestling is “sort of second to none,” and his understanding of the business-side of the sport has only increased in the time they’ve known each other.

Wilcott, who co-owns NWA Main Event with Mark Vaughn, has combined his knowledge from college-level marketing classes and seeing first-hand what works and what does not in WWE (he was in FCW for a time), New Japan Pro Wrestling and other companies to promote NWA.

Wilcott said NWA “started to emulate” what he learned in everything from stage set up to the “whole presentation” of the product.

Part of that Wilcott credits to looking the part and being likeable when promoting the company.

“[You have to] take all your opportunities and also make your own opportunities [and] reach out,” Wilcott said. “If you’re doing something positive, there’s usually a person who wants to help you.”

NWA Main Event, according to Wilcott, does not put on “wrestling shows,” but rather “wrestling events.”

“It’s an event for the whole town to come to and support,” Wilcott said.

Everyone from parents to church leaders to youth counsellors can take what happens in the matches and, according to Wilcott, apply it to real-life situations that help children learn life lessons.

And after a decade in the industry, Wilcott believes he has found his place in life.

“I love wrestling and love doing what I’m doing now,” Wilcott said. “I think it’s my calling to put on wrestling shows and be an active part of the community. Wrestling is an avenue that lets people get out their aggression and yell and scream, and we teach life lessons of good and evil.”