Given how many things Trish Stratus has on the go at any one time — acting, running her Stratusphere Yoga business, raising her son — it’s no surprise that she has to multi-task, like conduct this interview over the phone while taking her son out for a walk. Or like this weekend, where she’ll combine a visit from her “bestie,” Amy “Lita” Dumas, with an appearance at Fan Expo Canada.

“Team Bestie” will be at the event, which takes place at the Metro Toronto Convention Centre this Thursday through Sunday, where they will be holding autograph sessions, photo ops, and a joint Q&A session.

“It’s great any time I get to spend time hanging out with Amy,” Stratus told SLAM! Wrestling. “We have to work at (scheduling things), but in some ways it can be easy. She can say, ‘Hey, I’ve got this project coming up, so I’m going to swing through Toronto for a couple of days on my way there.’ In fact, we just baptized (Stratus’ son) Max about a month ago, and (Amy) came in to Toronto for that.” 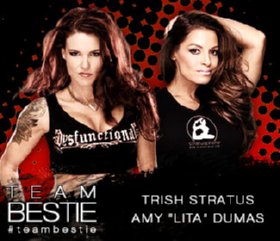 Fan Expo Canada is the largest event the two have done jointly on their current “Team Bestie” tour, and Stratus is looking forward to getting to spend a full four days with Dumas this time.

“We have so much that we can relate to each other,” she explained about their tight bond. “It’s nice that we were able to stay friends beyond (wrestling). It’s funny, because we’re total opposites in a lot of ways. On paper, you’d never think that we would hang out together. But we lived so much of our lives together on the same path — we were in the trenches together, from the beginning all the way through the end when we both retired — that we just stayed in touch.”

Indeed, the two of them are so close that Trish even asked Lita to be Max’s Godmother, “just so that she can continue to be part of my life, and his life, forever.”

Talking about her son instils an even higher energy in Trish than her normally high levels, evidenced by a quickening of her voice, despite trudging up a hill at the time.

“Mommyhood is the best, I love it, I love being a mom,” she rapid-fired. “I can’t imagine life without him.”

Though she acknowledges that, quite understandably, she had to make some major adjustments in her life.

“There was this point at the beginning,” she confided, “where I was questioning how I was going to handle it along with everything else. Because I’m a workaholic, I love working. So I was wondering how I would be able to, for example go to meetings while maintaining his feeding schedule. And so I did what I had to do to make it work. For the past few months, I was shooting a movie, and feeding him between scenes. And I’m actually bringing him to the Fan Expo, so it’s possible he’ll be at our booth when people come by.”

The movie she mentioned, set for release next September, is called Gridlocked and is about a SWAT team that must defend their training facility against a hostile invasion force. Stratus is the only lead female in an all-star cast that includes Dominic Purcell from TV’s Prison Break, Stephen Lang (the baddie from Avatar), and Lethal Weapon legend Danny Glover.

“It was just an amazing opportunity,” she said about the film. “Acting wasn’t something that I was necessarily actively pursuing, but I always said that if a good project landed on my desk, I’d certainly consider it. I had taken a break (from acting) after my last movie (2012’s Bounty Hunters) to focus more on my business and my brand. Then after a few months, I was meeting with an agent, and thought, ‘Yeah, let’s see what’s out there.’ Then suddenly I got this opportunity. They were filming Toronto, it was an action movie, which is a natural fit for me. I believe it was the universe saying, ‘Yep, here’s something amazing for you.'”

Stratus was also happy for the chance to be part of a cast that included many recognized names — since their Hollywood clout garners higher production values.

“I’m very proud of what we did with Bounty Hunters, and it was a great vehicle for me as my first film, but I’d say that the things that were missing in that one, we got to have in this one. With a smaller independent film, you don’t necessarily have the time to shoot it, the budget for giant explosions and extravagant set pieces.”

“If you saw Bounty Hunters, you may have noticed that even though I got beaten up a lot, I didn’t spill a single drop of blood. I remember we were doing a panel, it may even have been at Fan Expo, and someone asked why there was no blood. The producer joked that, ‘Well… blood’s expensive.’ So I got to bleed in this movie. You know you’re in the big leagues when you can bleed,” she laughed.

But the movies isn’t the only big leagues in which Stratus is playing. As a business-woman, she’s bringing her Stratusphere Yoga brand to even new heights — literally, as she’s recently opened up a second location at the Ritz-Carlton in downtown Toronto.

“It originally started as a pop-up shop,” she explained. “We were just going to take it slow, knowing that the summer isn’t necessarily the best time to build something (new). But it took off, it really did so well, and the residents loved it. So we’re continuing it for now.”

And for those that can’t make it out in person, Trish is happy to report that her new DVD will be coming out shortly — September 16.

“Along with the style of yoga I created,” she explained, “the DVD adds the strength training element. With my style, I lost my butt, and my shoulders, and I kind of looked a little skinny rather than fit. So I started integrating some strength training into it, and that’s what this DVD is.”

With all of that on the go, it’s hard to imagine that Stratus still has time to relax, but she does, including keeping up-to-date on the current WWE product.

“Of course, I’m always tuning in,” she confirmed. “For me, I always want to see what the girls are up to.”

That includes the recent storyline between Stephanie McMahon and Brie Bella, a program that Stratus really enjoyed.

“I texted Stephanie and told her, ‘Girl, you’re looking good — great to see you out there again.’ She was freaking out over not having worked for so long. But she looked fantastic. I love watching Stephanie, and I love how she’s come out to help build Brie Bella by putting her in this program. And I think Brie did an excellent job — she’s a great character, and a great person, and great for the product as well. It’s tons of pressure to work with the boss, and (you have) to be your best every week. If you’re given the opportunity, and you come through, that’s great. That’s the kind of challenge I love.”

The other thing Trish loves is the chance to meet her fans, something that she hasn’t been able to do very often recently, given her other commitments. Which is one reason why she’s looking so forward to this weekend.

“It’s great that I get the chance to meet and greet fans, because that lets you know who you are performing for. We truly appreciate people watching us do what we do on TV. As a fan, I loved to meet the (people) that I watched every week — so I know exactly what it’s like to be a fan at this event.”

In fact, there’s still a little bit of fan-girl left in Trish, even though she’s one of the marquee names in attendance. Though the hero-worship isn’t necessarily directed towards the most obvious target.

“I really want to meet the cast of Napoleon Dynamite,” she said. “Pedro from Napoleon Dynamite would be really cool to meet. He and Napoleon,” she laughed, “they’re kind of like Team Bestie — just maybe a little more awkward.”