Sometimes you just stumble upon a great nickname. Collin Cutler is current half of the tag team champions for the British Columbia-based All-Star Wrestling, and he and his partner, Kyle Sebastian were joking around in the locker room one day and stumbled upon “Cougar Meat” as a moniker.

“I looked at Kyle and said, ‘You know what? I’d really like to get a shirt that says ‘Cougar Meat.'” Kyle looks at me and his eyes just lit up. I said, ‘Don’t you dare *&%$# steal that from me.’ He gave me this look, like, let’s see who makes one first, right? That was probably three months until I got the shirt made,” recalled Cutler.

The young stars are being mentored by former WWF referee Kevin Jefferies, a veteran of the B.C. scene. They met that fateful day at Jefferies’ home for their road trip together. 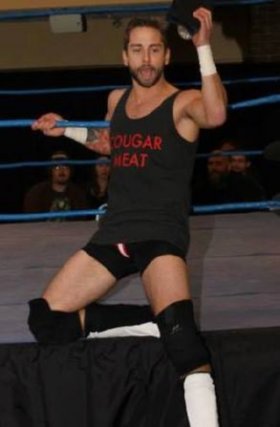 “I show up to do our road trip to Vancouver and we always meet at Kevin Jefferies’ house, and I’m wearing my Cougar Meat shirt. I get out of the car and Kyle looks like, ‘You *&%$#.’ I pull out a second shirt and I throw it at him. I made him one too. It slowly went from there, we built it as a tag team and pushed it on shows where we weren’t really supposed to push it. We’d wear the Cougar Meat shirts and come out during other people’s matches and just stand in the crowd, until the promoter had to take notice.”

And notice has Michelle Starr, the All-Star promoter.

“Kyle and Collin are a team in and out of the ring. They live in the same community. They party together and are best buddies. They’re almost like a couple who finishes the others sentences. Definitely a bromance,” said Starr. “The audience they target (cougars) are in love with them. While the men hate them. Most guys are thrown together to be a team not these kids. They were born to be a tag team.”

He and Sebastian make a quality team. Both are young — Cutler is 26, and Sebastian 25 — good-looking, and have worked at their craft. “Training with Kyle Sebastian regularly, we used to have a ring set up all the time, which unfortunately we don’t now, but we watch a lot of Japanese wrestling so we try that style.”

“The Cougar Meat team has really been working for us. We get to be ourselves and have fun with the gimmick,” explained Sebastian. “We feed off of each other, both inside and outside of the ring. We will go to the beach, in our Speedos, working on our tans, be at home studying tapes, or just goofing off shooting The Meat Market — when we are together it’s always wrestling, all the time.”

The road to pro wrestling started early for Collin Polmear, of Kelowna, BC. “I’ve been in love with pro wrestling since I was about five years old. The Bret [Hart] and Shawn [Michaels] Iron Man match is probably what really hooked me into wrestling,” he said. “‘Stone Cold’ Steve Austin was a big idol for me growing up [but] what really made me want to get into professional wrestling were the ladder matches between the Hardy Boyz and Edge and Christian.” With four cousins all around the same age, there was a lot of rough-housing, including wrestling on a trampoline.

As a teen, he decided he wanted to wrestle, and learned about Lance Storm’s new school in Calgary, Alberta, Canada.

In Calgary, he was fortunate to be able to live with his aunt, whose home wasn’t far from Storm’s school. During early 2008, Cutler concentrated on his mission, eschewing partying, doing “nothing but workout and train five hours a day. I put on about 20 pounds, and went from about 150 to 155 to about 175, doing everything I needed to. Sleeping 10 hours a day. It was the best three months of my life.”

Racking his brain, Cutler believes the class started with 14 students, and nine were left at the end; Cutler lasted, but was frustratingly on the sideline by the end of camp.

Cutler described the camp with Storm. 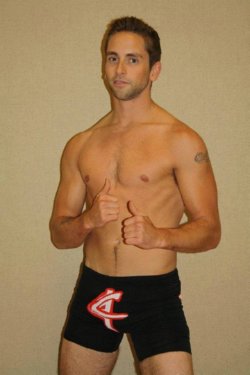 On the second or third last day of camp, Cutler was wrestling Storm. “When it got to the finish, I did a sliced bread, tucked too much, hit my head and gave myself a major concussion — and I still tried to keep myself going, even though I was loopy. So went to the top rope, with a major concussion, and then my knees buckled and I almost landed on his surgically-repaired knee. It was lucky he rolled out of the way.”

Cutler had to sit out the end of camp, and had been the only one who hadn’t gotten sick or no-showed during the three months — “it killed me.”

Just as frustrating was that Cutler had already gotten the ball rolling on a wrestling career.

“I actually ended up getting my first booking before I was done training,” he said. “In our final evaluations with Lance, he was telling us what we had to do to get booked, and when he got to me, I said I already had my first booking. He went, ‘Good for you.'”

Though he didn’t know it until he started training, he was related to British Columbia mainstay and now co-promoter of ECCW, Scotty Mac, who is his cousin through marriage. Cutler made his debut for ECCW in his hometown of Kelowna, against Sid Sylum.

“How did it go? Huh. How does anybody’s first match go? I completely cut out all of my stuff. When I got to the end of the match, I had gone to the top rope where I missed something, landed, and in my head went, ‘Now I’m going to … *&%$#!’ Sid just picked me up and tombstoned me and that was it. So in my head, I was the *&%$#. But no one’s going to notice that, and Sid got all his stuff in, so he didn’t care. It was definitely an interesting experience.” 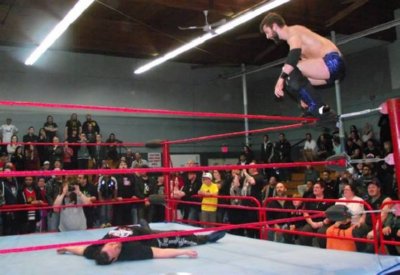 The 5-foot-10 Cutler had another setback in late 2008, when he tore his pectoral muscle while doing stucco — “I lost almost every pound I put on, and back down to about 160,” he recalled. “Funny story. I was told not to workout for eight months with the torn pec. I still kept working shows, because I could not stop, I was brand new … I probably didn’t do my shoulder any favours.”

The wrestling business can be pretty tough, he admitted. “One thing you are humbled with in training is that this business is a lot harder than you think it is, getting into it, and then you’re always, always learning,” said Cutler. “The shoulder injury was a huge setback. I had aspirations until then, but it’s really hard for me to put on size, like genetically.”

Jefferies agreed that Cutler’s build is his biggest flaw. “Collin needs to improve on his size. This young man has the ring savvy and psychology to do well,” said Jefferies. “He’s very good at extreme and high flying along with putting a story together.” 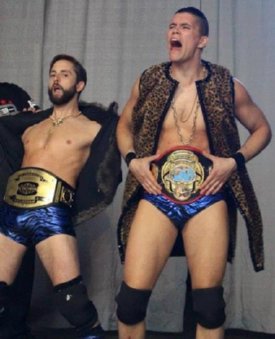 Sebastian wishes they could go back to the days when Jefferies refereed often, and there was tons of ring time for the workers. “Unfortunately in our area there are not a lot of permanent set up rings, so we all don’t get as much ring time as we would like,” said Sebastian. “The only way to really perfect the art of timing is practice. If we could fine tune our skills with more practice we could be a great tag team.”

Cutler has really only worked in Western Canada, and admits he is somewhat lacking in drive as far as wrestling goes. He has a good job as a wellness coach at the YMCA in Kelowna, with all the appropriate personal training certification from the local college, and further education in process to be able to work with osteoporosis patients and seniors.

“I don’t feel like I have quite pushed myself enough to do so — I’m not saying that I can’t, it might not be a bad idea,” he confessed. He’s never done a special seminar or had a tryout with any of the major organizations. “I’d love to do a Mexico tour or matches in other countries. I’d love to train in England; that’s always something that I’ve thought about, because I really love that style — huge fan of Jonny Saint.”

Cutler was surprisingly self-reflective when asked about his lack of drive.

“I’m always trying to grow as a wrestler, but I think the biggest thing for me over the last six years has been my confidence,” he began. “I had a real confidence issue coming out of Lance’s school. I think everybody as a fan, every wrestler as a fan thinks they can be the world’s greatest wrestler. Then you go to camp and you realize you’re in a room with 20 people who think they’re going to be the greatest wrestler. Then you get trained by someone like Lance Storm and you realize you’re maybe not hot s— like you thought you were. For me, just coming out and getting into the world of pro wrestling was just so crazy and overwhelming, so my first four years were a bit of a struggle. Even though I got singles titles and I got crowd reaction, and I identified with the crowd, just my workrate and all the other workers around me, especially the younger guys, like Kyle Sebastian, who is a year younger than me and just incredible, I had a real confidence issue. That’s starting to build a little bit now with some of the more training I’ve done over the years, and even working with Kyle — Kyle’s been a huge help with helping me grow as a wrestler and get a little more confidence. It’s coming and we are getting better opportunities now with the tag team now, with me and Kyle; we’d love to see where that goes.”

Jefferies, for one, will continue to believe in them: “These two young wrestlers just gel so well together, work hard and make it look so easy ,as if they were born to be a team in the ring and on the mic.”

— with files from Pat Laprade