At the 2013 San Diego Comic-Con, Papercutz and WWE announced a partnership to produce a line of comic books based on various wrestlers, legends, and personalities. While the WWE Superstars series garnered much of the attention due to the fact that WWE Legend Mick Foley would be co-writing it, Papercutz also launched the WWE Slam City series based on the animated shorts of the same name that have been airing since March of this year on the WWE Network and YouTube. 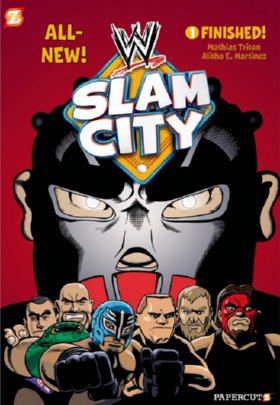 In the first trade paperback, WWE Slam City – Finished!, the series primarily focuses on John Cena, Rey Mysterio, Santino, and Kane with occasional appearances by other WWE Superstars such as The Big Shown and Sheamus, as they venture out into the fictional world of Slam City.

When reviewing a series based on a show from another medium often the central question is whether or not it can stand on its own or is it necessary to have been exposed to an episode or two of the program in order to be able to follow the comic book.

Thankfully, in the case of WWE Slam City, writer Mathias Triton does an effective job at setting up the premise which has the mysterious figure The Finisher firing the WWE Superstars and sending them out into Slam City to survive on their own. From there the story shows what happens when Cena, Mysterio, Santino and Kane go out and try to use their wrestling abilities in every day jobs to sometimes humorous effect. Also, The Finisher and later his henchman The Instigator return later in the story which results in the various WWE Superstars reuniting in order to help each other.However, an additional question about this comic had to be asked which was whether or not the WWE Superstars would be recognizable to those who had only ever watched them on WWE’s RAW. Again, writer Triton and also artist Alitha E. Martinez ensure that Cena, Mysterio, Santino, Kane, and others are all recognizable and distinct in terms of character, appearance movement, and distinct wrestling holds – such as the 619 or the Attitude Adjustment – while at the same time maintaining the more Claymation look of each wrestler as they were depicted with in the animated shorts. 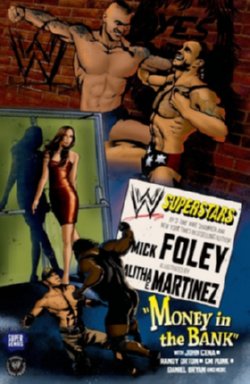 MINI REVIEW: I really liked this book because it was written by Mick Foley and because it stars lots and lots of WWE superstars. – Quinn Oliver, age 7

Also, Martinez’s artwork does seem to bear some influence by comic artists Ed McGuinness, Mike Allred and animator Bruce Timm with its deceptively simple line work. However, when looked at more closely there is a great deal of sophistication to Martinez’s art which is used to great effect with its ability to depict Triton’s story with a good pacing that keeps the attention of the reader.

While the WWE Slam City comic can be enjoyed by people of all ages, there is little doubt that its ideal target audience are kids interested in discovering a bit more about wrestling and the realm of World Wrestling Entertainment. With that of course comes questions about whether the series is appropriate for children as sometimes wrestling has been seen as being too violent especially for the very young.

Such a judgement is something that at best should be left up to each individual parent and their child, but in the comic what violence is shown is fairly cartoonish with it being readily apparent that everything is taking place in a kind of superhero environment that bares a passing resemblance to the real world. It is also fairly brief with a great deal of the focus of the story more towards humor rather than any serious confrontations between characters.

Ultimately what Papercutz have produced with the WWE Slam City comic is a fun and humorous series that is a good entry to World Wrestling Entertainment that may result in them wanting to find out more and become a lifelong fan.