Victory on TV is the dream of Rosa Mendes

Here’s something you probably didn’t know about Rosa Mendes, and it’s certainly something she hopes to change in the near future — she has never won a singles bout on WWE television.

It is a bit hard to believe for someone who has been on (and off) WWE TV since 2008.

“I would like to win a match,” Mendes laughed while talking to SLAM! Wrestling during her SummerSlam media rounds. “I haven’t won a match yet on TV and a victory would be really nice. It would be a great accomplishment. So that’s my dream right now. To have a run for the Divas title, I would love to have that.” 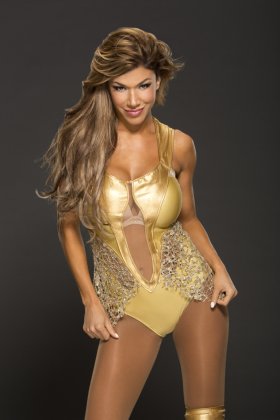 Given the background of Milena Leticia Roucka — she was a Vancouver, B.C. model before getting into wrestling, she has heard a lot of the naysayers talk about her lack of wrestling experience.

But she said that isn’t the case, and that she has a real love of the business.

“When you have a passion for something, and you can’t practice it enough,” she said. “Now that I get to be in the ring more, I’m a lot happier. But I would just love to have a victory, and I would love to have a run for that title.”

With her unique mix of Czech and Costa Rican parentage, Mendes has always stood out compared to other WWE Divas, whether she was stalking Beth Phoenix, acting as the valet for Epico and Primo Colon (who apparently have become bullfighters), or participating in the girls from E!’s Total Divas show against the girls who weren’t on the show.

The bouncing back and forth from wrestler to valet to wrestler to off TV has made it tough to keep her in-ring skills sharp, admitted the 34-year-old Mendes.

“It’s hard because right when I start to get in the realm of things, with matches and matches, and I’ll start getting better, and then I’ll start valeting. You kind of get a little rusty,” she admitted. “But then you get back in the game, and it’s like riding a bike, basically. You start to remember all the moves.”

In the summer of 2006, Roucka competed in the WWE Diva Search and reached the final eight. She won the first round, a dance competition. After she was eliminated on August 24, WWE then signed her to a developmental contract.

She definitely learned from some of the best in Danny Davis and Rip Rogers in WWE’s past-developmental territory of Ohio Valley Wrestling.

“You actually learn little things from each person. I feel blessed that I’ve learned from so many different coaches and stuff, because a lot of people don’t have that opportunity,” she said. “I definitely feel grateful that I’ve gone to train with so many of the best people in the world.”

Rip Rogers, in particular, switched her mentality from modelling to wrestling. “He was a very tough guy, he was tough. But for me, coming out of the modelling industry, I think the timing was perfect for him to be my coach. I became a lot more humble, that’s for sure,” she chuckled.

With some training in kickboxing, Muay Thai and Brazilian Jiu-Jitsu, Mendes is proof that the packaging can be deceiving. She hasn’t ruled out bringing some of those skills into the ring at the right time: “Maybe in the future I will do a couple of moves. I can’t really use the triangle, because somebody else uses that, but I would love to.”

Off television for almost a year and a half, partly for personal reasons, Mendes is back into the game big time. She’s a part of the cast for the third season of E!’s Total Divas and is committed to her trade.

“I trained to be a wrestler, I trained to be in the ring, when I went to OVW, FCW, and I went back to the Performance Center for a couple of months as well,” she began. “Right now, the fact that I’m doing live events and I’m doing a lot more in-ring work, it’s really, really awesome, and I’m having such a great time.”

But not winning does affects one’s psyche, she confessed.

“Yeah, it sucks,” Mendes concluded with a big laugh. “But, you know what? When you don’t have something, for me, this is my outlook on life — when you want something bad enough and you work hard for it, you will achieve it. I never thought I would get to be on Total Divas. I was like, ‘I haven’t been on TV for a year and a half, just matches here and there, but really I haven’t been working that much.’ So when I got Total Divas, now that I have Total Divas, I was like, ‘Anything is possible.’ I’m going to work hard, and I’m not going to let my fans down. I am going to get my victory and I am going to get a run for that title soon.”