No matter what people told him, Fidel Sierra knew he would find success as a professional wrestler. Born David Canal, Sierra’s family emigrated from Cuba to the United States when he was less than a year old. Sierra fell in love with wrestling as a child in West Tampa, through Eddie Graham’s Championship Wrestling from Florida.

“I was 11 or 12 and went to the matches,” Sierra told SLAM! Wrestling, “and I remember at 12 years old I would tell people that was what I was going to do as a living.” 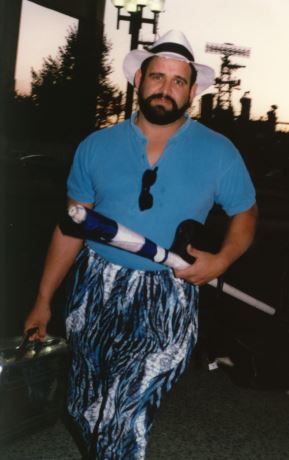 Cuban Assassin heads into Buffalo’s Memorial Auditorium during his run in World Championship Wrestling in the late 1980s. Photo by Terry Dart

Through Graham’s Saturday morning workouts at the Tampa Sportatorium, Sierra gained exposure to amateur wrestling technique. When a teacher in high school told him that he’d never make it in wrestling, instead of discouraging Sierra it fueled a desire to prove the teacher wrong.

After matches with outlaw promotions, Sierra formally began his professional career in 1978. It ultimately would carry him through multiple countries and bring him into contact with some of the finest promoters and performers of the last 50 years.

“Wherever I went, I was ready,” Sierra said. In many ways, he is a member of a fading fraternity of wrestlers who could always be counted on by promoters to deliver a solid performance. Whether as a babyface or a heel, on the top of the card or opening the show, under a mask or in fatigues, in the United States or abroad, Sierra’s versatility, hard work and toughness in the ring earned him steady work and wrestling success.

Sierra got his start through a connection with King Curtis Iaukea, Rocky Johnson and Rocky’s then-wife Ata Maivia, who hooked Sierra up with Dallas, under World Class Championship Wrestling booker Gary Hart.

His first match in the territory was with Dale Hey, later known as Buddy Roberts. “He was going at that time as Dale Valentine and his manager was Johnny Valentine,” said Sierra. “What battles; Johnny had him chopping me like crazy!” Hart dubbed Sierra David Patterson, and under his new name he travelled the Texas circuit working for Paul Boesch in Houston, Fritz Von Erich in Dallas and Joe Blanchard in San Antonio. “Joe Blanchard said, ‘You speak Spanish? Why would they call you David Patterson if you speak Spanish?’ I didn’t even come up with the name, you know what I mean?”

World Class referee Bronko Lubich recommended Sierra to booker George Scott, who then brought Sierra into the Mid-Atlantic territory, again as David Patterson. “George Scott was one of the best bookers I ever worked for,” said Sierra.

Travelling to the Carolinas, he interacted with that area’s extraordinarily rich early 1980s talentpool. “I was working with Ricky Steamboat and Jay Youngblood. It really made it great,” he says. “Sgt. Slaughter, Roddy Piper, Blackjack Mulligan; it was unreal. It was such a great crew of guys that it was hard not to have great matches.”Returning home to Eddie Graham’s Florida territory, he adopted the name David Sierra and was able to work with Dory Funk Jr., Jack Brisco, and a number of other legends he had admired as a teenager. “Dory Funk Jr. was the booker and he knew that I was Cuban and spoke Spanish,” said Sierra. “I had a six-man elimination match on TV. It was me, Tommy Gilbert and I think it was Cocoa Samoa were my partners against Buzz Sawyer, Dory Funk Jr., and I believe it was Bobby Jaggers. Within 15 minutes it was me and Dory Funk Jr., and we went the whole hour. My first time on Florida Championship Wrestling, they had one match in that whole hour and it was me and Dory Funk Jr. to a time-limit draw.”

In the mid-’80s, Sierra worked as The Saint, dressing in a full white body suit and mask. “Eddie Graham loved it,” Sierra told Jim Valley, host of Pro Wrestling Torch’s Saturday Morning Wrestling. “I would go to the towns dressed all in white, and I would put my hood on when I got there. When I wrestled I would change into my spandex white with the gold halo. Eddie Graham pulled me aside one time and said, ‘You know what I like about you, kid? You live your gimmick.'” 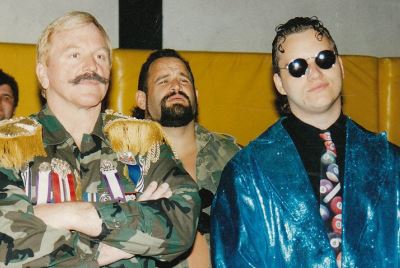 Sierra would stay in Florida until the mid-’80s, eventually winning the Florida Heavyweight Championship from Kendall Windham. While in Florida, Sierra also endured the death of Eddie Graham. “Between him and Dory Funk Sr., they were the best,” Sierra mused. “They were like history books in wrestling when it came down to showing you what to do in a match.”

During his time in Florida, Sierra developed a close relationship with trainer Hiro Matsuda. “Hiro took me under his wing. Hiro saw that I had more potential,” he said.

Matsuda sent Sierra to work in Japan where he wrestled, among others, Antonio Inoki, Tatsumi Fujinami, Seiji Sakaguchi and Andre the Giant. “Inoki was really good to me,” said Sierra. “That whole office was good to me. I don’t know if it was because Hiro sent me and they had a lot of respect for him.”

Sierra was tested physically in the ring, but was able to give as good as he got. “I knew that in Japan if you let those guys beat the hell out of you your first night there the rest of the tour you were going to have your hands full,” he said. “And they did put me to the test. I saw a lot of guys not defend themselves and they ended up getting eaten up the whole tour.” 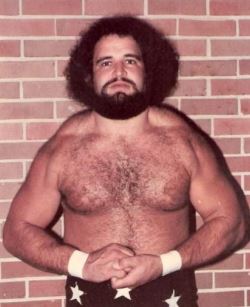 In addition to his work in Texas, the Carolinas, and Florida, Sierra became a mainstay in Don Owen’s Portland territory. There he adopted a number of characters and masks, and worked as both a favorite and a heel. “My first time to Portland I stopped to wrestle in Dallas and I called Don Owen and I said, ‘I’m in Dallas headed to Portland,'” said Sierra. “He said, ‘I need you to find a mask because I’m going to have you wrestle as The Destroyer.’ I said that Dick Beyer was already the Destroyer. Don said, ‘I don’t care. You’re going to be the Destroyer. You’re in the Northwest. It doesn’t matter.'”

Following his run as The Destroyer he transitioned to wrestling as The Assassin and into a feud with “Playboy” Buddy Rose. After another tour of Japan, prompted by losing a loser-leaves-town match to Rose, Sierra returned under yet another mask. Now a fan favorite he wrestled as Top Gun, entering the ring to Kenny Loggins’s “Danger Zone,” the theme song from the 1986 Tony Scott-directed vehicle for Tom Cruise from which Sierra took his new name. Sierra worked frequently with “The Grappler” Len Denton and developed a close friendship with the veteran masked man. While in Portland, Sierra held most of the major championships in that area, including the Pacific Northwest Tag Team Championship, Television Championship, and Pacific Northwest Heavyweight Championship. 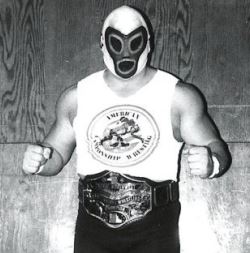 Sierra moved to World Championship Wrestling, wrestling as the Cuban Assassin and Fidel Sierra. While Sierra could pull off work as a babyface, he excelled as a heel. He had a world-class snarl and could back it up with a physical ring attack. He engaged in a memorable feud with Hacksaw Jim Duggan. Duggan who, after defeating Sierra in a flag versus flag match on WCW Saturday Night, memorably blew his nose with the Cuban flag and broke the flag pole over his knee. “People were so into anything against the United States,” said Sierra. “And back then, Cuba wasn’t open. I used a lot of ‘Castro’ and that I loved him. That got me a lot of heat.”

While in WCW, Sierra also reunited with Hiro Matsuda. Matsuda was working as a trainer and involved Sierra in helping along younger talent, in particular Jorge González (El Gigante, Giant González). Sierra let the seven-footer practice suplexes and other holds over and over. When given the chance to reverse roles, he could apply enough extra pressure to be sure the younger wrestlers knew who was in control. “The business back then, old timers would help you out but they would make you go through hell,” said Sierra. “Hiro knew that these guys I was training, I would put them through a little bit of hell.” 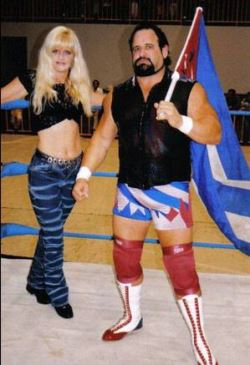 As he did in WCW, Sierra used his Cuban heritage to enrage fans while working for Carlos Colon’s World Wrestling Council in Puerto Rico in the early 1990s. “I would say, ‘If it wasn’t for Cuba, Puerto Rico wouldn’t exist,’ and, ‘We’ve got more Cuban-owned businesses in Puerto Rico than Puerto Ricans.’ Carlos Colon and I sold out so many weeks in a row!”

Sierra enjoyed a career that as a child he was only able to dream about. He followed his dreams, though, and they carried him around the world. Sierra now lives in Florida with Fantasy, his long-time wife and manager, and runs Crazy Dave’s Sports Bar in Largo.

Earlier this year, he was able to visit Cuba for the first time since leaving as an infant thanks to an easing of travel restrictions under President Obama. “It was beautiful,” he said.

Wrestling is still in his blood, and he continues to wrestle on occasion. At the upcoming Cauliflower Alley Club reunion at the Gold Coast Hotel & Casino in Las Vegas, he will be presented with an award recognizing his years as a pro wrestler. “It’s one my biggest honors to be [honored by] the Cauliflower Alley Club,” he said. “To see all the guys who paved the road before me, and the road that I paved for some of the guys after me. It means the world to me.”