Bill Alfonso brought his client Sabu to Toronto last week despite the protests of ECW.

“We’re here not in ECW’s best interests,” said Alfonso backstage at the Canadian Wrestling Alliance show at Medieval Times. “They didn’t want us to come because Sabu’s got a real hurt neck and we’re got the big thing coming up January 10 — I’m talking about our big pay-per-view, live from Kissimmee, Florida. … So Sabu’s taking a big chance by being here tonight but that’s what Sabu’s all about. He actually f—ing suicidal, homicidal, genocidal.” 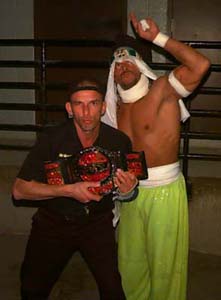 Alfonso looked in pretty rough shape himself, and in his raspy voice he showed off his plastic cast on his arm, following $30,000-worth of reconstructive surgery. He’s been on the road constantly, just back from the ECW tour of Japan, and was really looking forward to a little down-time at his Florida home.

Despite the ragged-look, Alfonso is having a great time.

The referee-turned-manager is loving his role taking care of Sabu, and ‘Mr. Monday Night’ Rob Van Dam, who missed his booking for the Toronto show. It’s not just a show either. Alfonso really does manage some of Sabu’s affairs, including finances.

“I’m the hardest working manager in the business today, I think personally,” he said. “I bust my ass, I’ve got ring knowledge, and been around for 20 years. And I’m a shoot manager, I’m a real manager. I take care of a lot of Sabu’s affairs. Now I handle some of his monies and stuff. So it’s lot more than just going out there and busting your ass.”

Alfonso was a referee for years, and worked all around the world.

Shane Douglas brought him in to ECW in 1995 as a by-the-book referee. Of course, in the twisted world of ECW, that made him a heel for DQing people for using chairs. From there, he grew into a full-fledged heel and feuded with ECW founder Tod Gordon. That feud even led to matches between the two non-wrestlers, which Tod Gordon said were his greatest wrestling memories in a previous interview with SLAM! Wrestling.

“I had my fill of refereeing in about 17 years,” recalled Alfonso, moving on to his current role. “I didn’t know I had this hidden talent inside me. ECW brought it out in me. They created a small monster and I love it. It’s fun and I’m having fun, making money and I’m 41.”

“Things change all the time,” Alfonso said. “It’s not bad for us, but it’s definitely not good for us. But ECW as a whole is a survivor. That’s what it’s all about, a team effort. This is not one guy. It’s not Bam Bam Bigelow. It’s not one single person, except maybe with the exception of Sabu and Mr. Monday Night, the whole F’n show. It’s a package deal and the people are interested in it because it’s different: hardcore, violent, sex. So that’s what sells and we’ve got the whole market.”

He knows that ECW can’t compete with the big dollars being thrown around by WCW and, to a lesser extent, the WWF. And he insisted that neither he, nor his two clients, are looking around for a new gig.

“We’re happy right where we’re at. We’re just re-negotiating contracts. Everybody wants us but we like where we’re at and we’re having a good time making money.”

Will ECW ever make it up to Canada?

“One step at a time. We like where we’re at,” he said. “We’re rolling slow. We try to outdo ourselves and that’s how you get killed. Just one step at a time. We’re doing good, selling out wherever we go. There’s a lot of markets, and Canada is definitely one of them and we’re definitely interested in. But we’re so built-up now, we don’t even have room in our schedule for Canada. But we’d definitely love to come to Canada, period, and show what hardcore’s really all about.”

The Toronto audience was truly pumped for the Sabu vs Scott D’Amore match. Sabu did all his trademark moves, like the Arabian Facebuster, the dive into the crowd, and the table crunching. And Alfonso ran around ringside blowing his whistle like some deranged referee.

However, the fans in Toronto, despite being really into the match, don’t compare to the ECW hardcore fans in locales like Philadelphia.

“You’ve got to be careful and protect yourself at all times,” explained Alfonso. “You’ve got to keep watching. You never know what’s out there.”

On one occasion, he almost bled to death after being bashed in the head with a cookie sheet that a fan had shaved the edge off of. That resulted in 14 stitches on the outside and six on the inside.

And it certainly wasn’t his only trip to the hospital.

“I’ve had my shoulder separated four, five times. I’m having back surgery. My knees are f—ed up. All the injuries. You never forget those, and I’m going to carry those around for the rest of my life.”

His client, Sabu, recently got married to “a gorgeous girl from Japan. But that’s kind of personal.”

During the tour of Japan, tribute was also paid to Sabu’s uncle, The Original Sheik Ed Farhat.

Alfonso and Sabu both loved the time with The Shiek, and consider him a mentor.

Talk of The Shiek brought up one final memory from Alfonso.

“The first professional match I refereed, and actually got paid for, was in Olympia, Texas working for The Funks — they were the promoters at the time. The first match I did was The Shiek, [Sabu’s] uncle, against Terry Funk in a chain match. I was scared to death. I was 21 years old, a kid. I said ‘Oh my God, look at me!’ Boom! I was a natural. I fit right in and I’ve been rolling ever since. Now I’m an ECW superstar and loving every minute of it.”