The Canadian wrestling community has lost another legend. 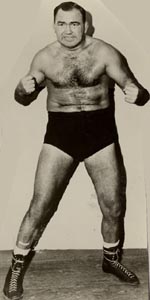 Christie, who’s real name was Joe Kayorie, was one of the meanest villains inside the ring, and a nice guy outside it.

Ted Beare, sports columnist for the Brantford Expositor, shared this story in his column after learning of Christie’s death:

“One day the sportswriter had stopped to talk to a friend in the supermarket when Kayorie came down the aisle, pushing a cartload of groceries. They stopped to chat for a few minutes. After Kayorie left, the sportswriter asked his friend: ‘What do you think that man did for a living before he retired?’ ‘He’s big enough to have been a football player,” the friend replied, ‘But he doesn’t seem to be mean enough.’ ”

Christie was born in Buffalo, NY, but moved to Brantford when he was just two.

He started wrestling in 1946 and made it his business for 23 years to frustrate fans by beating on their heroes.

And when he couldn’t show his face around town, the 6′-3″, 235-pound Killer would don a hood and become The Masked Marvel or the Destroyer.

Christie wasn’t much for holding titles over his long career. He was a world junior heavyweight champ in 1951, and held the Texas-version of the world tag titles with Danny McShain in the early sixties.

Long-time wrestler and current ICW president Waldo Von Erich said Christie was “a likeable guy” who was always the heel.

In his 1997 interview with SLAM! Wrestling, Stu Hart talked about Christie:

Visitation for Christie is at the Thorpe Brothers Funeral Home from Saturday 7 – 9pm and Sunday from 2 – 4 pm and 7 – 9 pm. A prayer service will be held in the Thorpe Chapel on Monday at 11am. Interment Mount Hope Cementery. In lieu of flowers, donations in Joe’s memory may be made to a charity of your choice.