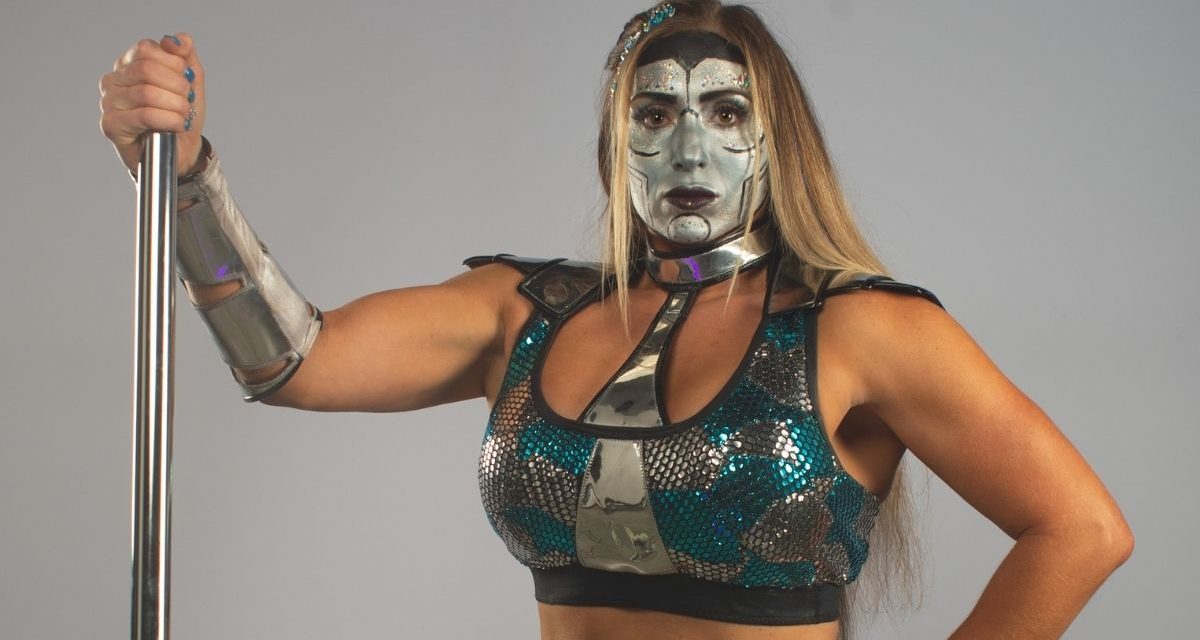 The pandemic and a serious car crash were a double-whammy that changed Jenna Van Muscles into Jennacide. The relatively new character will be on full display at this Saturday’s all-women’s NWA Empowerrr pay-per-view.

“Jennacide was after everyone is locked in their house for a year in the pandemic, I was able to kind of re-brainstorm and I just felt like I needed a change and it’s good to evolve and I wanted to tell my story a little bit more and be open,” Jennacide told SlamWrestling.net.

Slimmed down by more than 40 pounds from her days as Jenna Van Muscles, when she was heavy into powerlifting and bodybuilding, Jennacide is about something more now.

“My face paint symbolizes metal and everything. I survived a horrific car accident and I do have metal and wires in my body. I’m healthy now and I work really hard on being in shape that after everything I’ve been through,” she said. “I hope my story can inspire others and it took me a long time to be comfortable with everything I’ve gone through and share my story. I’m hoping I can motivate someone.”

Studying Muay Thai and jiu-jitsu is part of the reason for the smaller, but more agile, wrestler.

Change and doing new things has always been a part of who Jenna Van Bemmel is. “I’ve always done athletic things,” she said, beginning to list off a variety of interests through the years: swimming, water polo, flag football, powerlifting , bodybuilding, CrossFit, boxing, adventure events like mud runs, roller derby. “You name it and I tried it.”

She recently paid tribute to her parents on social media — her mother was a Rockette, and her father played football and was an amateur wrestler at Missouri State (though they have never seen her wrestle in person).

“My dad is where I get the athleticism from…he was a big man and played football and in his offseason wrestled and my grandfather stood at six four and was a giant man, my dad was 6-2. In my boots, I’ll say I’m six [foot]. Being big runs in the genes,” said Van Bemmel. “I would say more of the entertainment side comes from my mother, more of the entertainment definitely comes from her being a show girl and everything. Don’t ask me to dance though.”

Her parents have been supportive all along, even when, later in life, when their daughter decided to give pro wrestling a whirl. That was in 2011, when Van Bemmel headed to Lexie Fyfe‘s Slam Shack in Brandon, Florida. She studied under veteran Rain, and further benefited from a rehabbing Mercedes Martinez, who was coming back from shoulder surgery. “Having strong women off the bat training me, I know how lucky I am, because I’ve heard horror stories of other trainers and coaches,” said Jennacide, who considers Martinez, recently released from WWE/NXT, one of her best friends.

Further education came alongside Chris Silvio, who Van Bemmel now calls “my other half and my life partner.”

“He’s been in the business for 20 years. So he’s really helped me further develop all my wrestling skills and I really would not be the wrestler I am today without him,” she said. 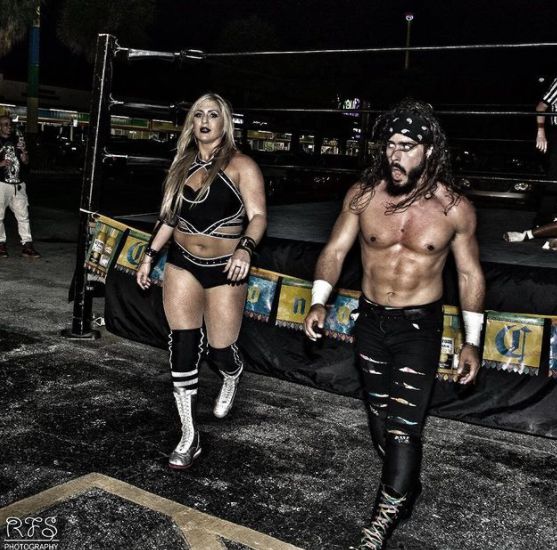 The 36-year-old Van Bemmel is not all-in on wrestling. She has a career in merchandising and sales with an infomercial company that keeps her busy. “I’m corporate during the day, and I train at night, and on weekends I travel for wrestling,” she explained. “I have two different personalities, I’m trying to rein it all in. It’s a lot — two separate lives.”

“I did it a little backwards. I went to college and made sure that I got my degree, and I have a back-up plan, and I can have that all set up. I’m the one that’s going to be taking care of my parents,” continued the Florida native. “I know a lot of wrestlers, and sometimes they don’t have a backup plan. And once you hit that point, and you can’t wrestle anymore, it’s kind of like, ‘Oh, what’s my next chapter in life?’ I don’t want to be in that situation.”

The Jennacide character is a separate persona from her Jenna Van Muscles gimmick — and “Van Muscles” was actually a historic nickname, not just for wrestling.

Jennacide debuted the “rebrand” at one of Thunder Rosa‘s Mission Pro Wrestling all-women’s shows in 2020. “Mission Pro is a whole other experience in itself with Thunder Rosa leading the charge there. It has such a special magic when you’re there. Not only the fans in the crowd that are so loving and generous, it’s a sisterhood in the locker room and everyone’s supporting each other — drama free zone, really just everyone going out there and killing it and supporting each other. It’s like nothing I’ve experienced in wrestling. That’s why I keep going back there,” she raved. “Without her, Thunder Rosa, I probably wouldn’t be at NWA. I’m sure she put my name in there. She’s an amazing woman with a great mission, and I fully support her leading the charge on Mission Pro and for the women — and having a safe and encouraging environment.” 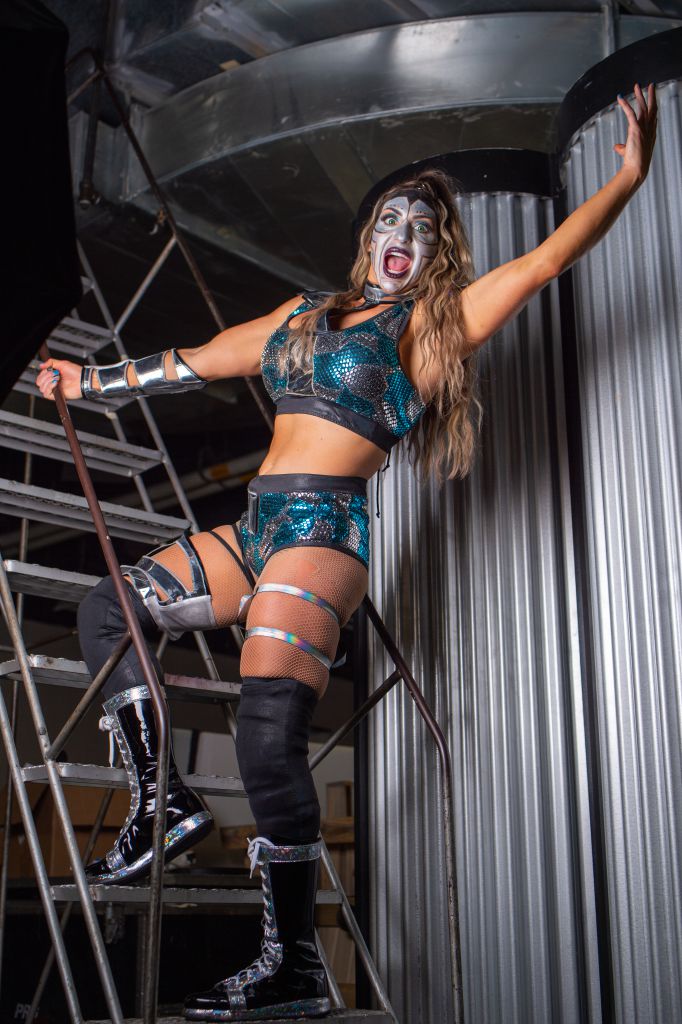 The toughest part of Jennacide has been the facepaint. “Let’s just say I’m no makeup artist,” she laughed. “You should see me cursing in my mirror sometimes with my paint brushes, because I don’t know what I’m doing half the time, but I watched a lot of videos and taught myself how to do it.”

The reward is worth it. “There’s nothing more I love than kids after the shows, and I love being their superhero. So it’s definitely worth me learning to do the makeup. I get to be like a comic book superhero to all of them and inspire them.”

The journey has been varied for Van Bremmel. She’s gone to seminars to learn, including at SHIMMER weekends, and done enhancement work for most of the big companies. The NWA Powerrr show has been a great opportunity to show what she can do.

At Empowerrr, Jennacide is competing in the NWA Women’s Invitational Cup Gauntlet, with the winner facing the NWA World Women’s champion at the NWA 73rd Anniversary Show on Sunday night, which could be current champion Kamille or her challenger at Empowerrr, Leyla Hirsch. The nine other women in the gauntlet are Tootie Lynn, Jamie Senegal (with Pollo Del Mar), Chelsea Green, Lady Frost, Debbie Malenko, Bianca Carelli, Masha Slamovich, Thunder Kitty and Kiera Hogan.

Jennacide wracked her brain and figured she had only competed against one of the women previously. “There’s a lot of new faces that I haven’t shared the ring with yet. I know I’m gonna have my work cut out for me. But I’m ready for anyone. I train so hard, it doesn’t matter who you want to throw in there,” she said.

Wrestling at the Chase was the TV show that ran in St. Louis for years at the Khorassan Ballroom of the Chase Park Plaza. It’s a historic location for two historic NWA pay-per-views, August 28-29. Ric Flair was announced as appearing on Sunday’s 73rd anniversary show only hours before Jennacide was interviewed, and she let out a “whooo!” at the news.

The Empowerrr show is her focus, though. “I can’t wait. I mean, how many girls are on the show, that many women and on one show? And who knows what other surprises, there’s always surprises. So I can’t wait to see what the big surprises are. Because there’s no pay-per-view without them.” 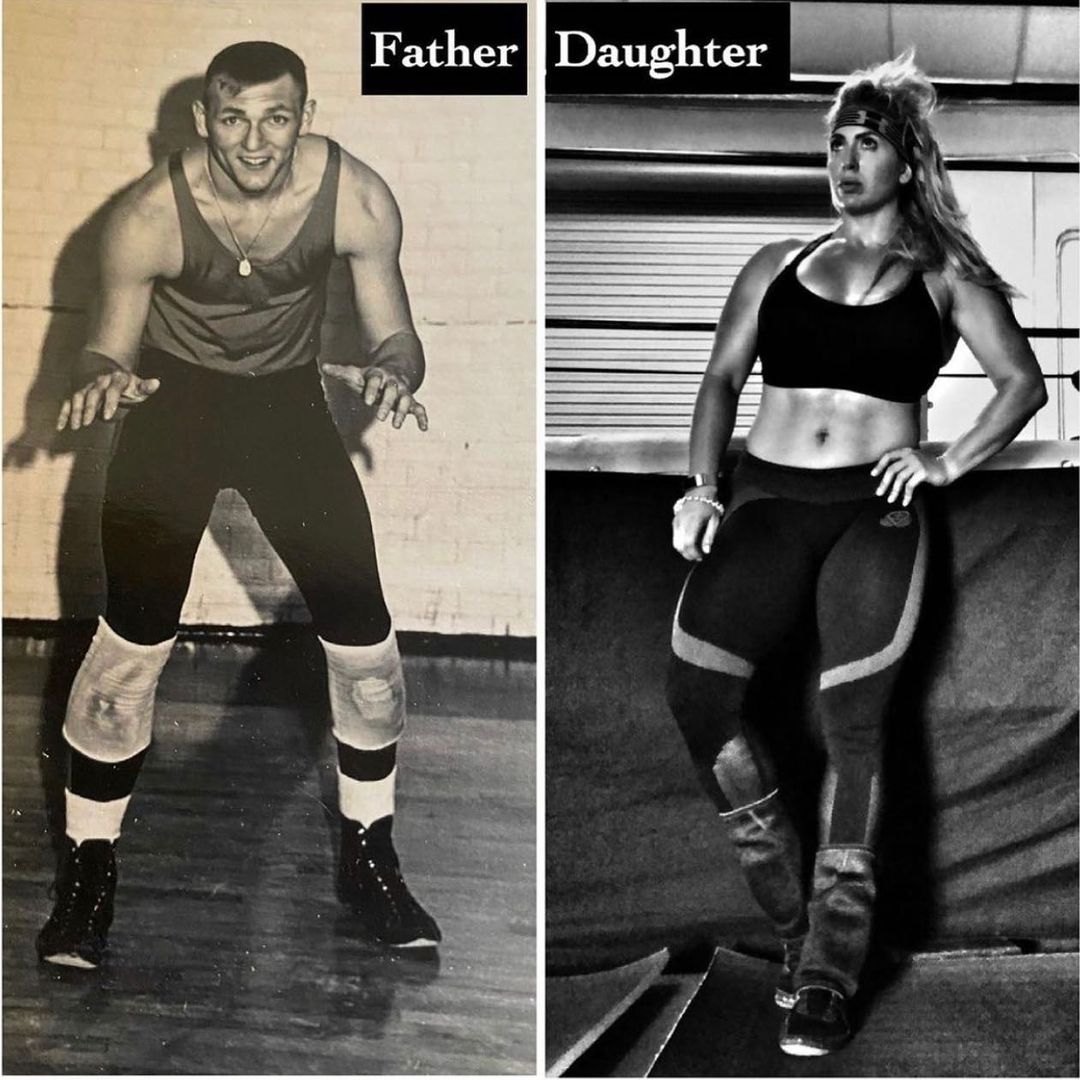