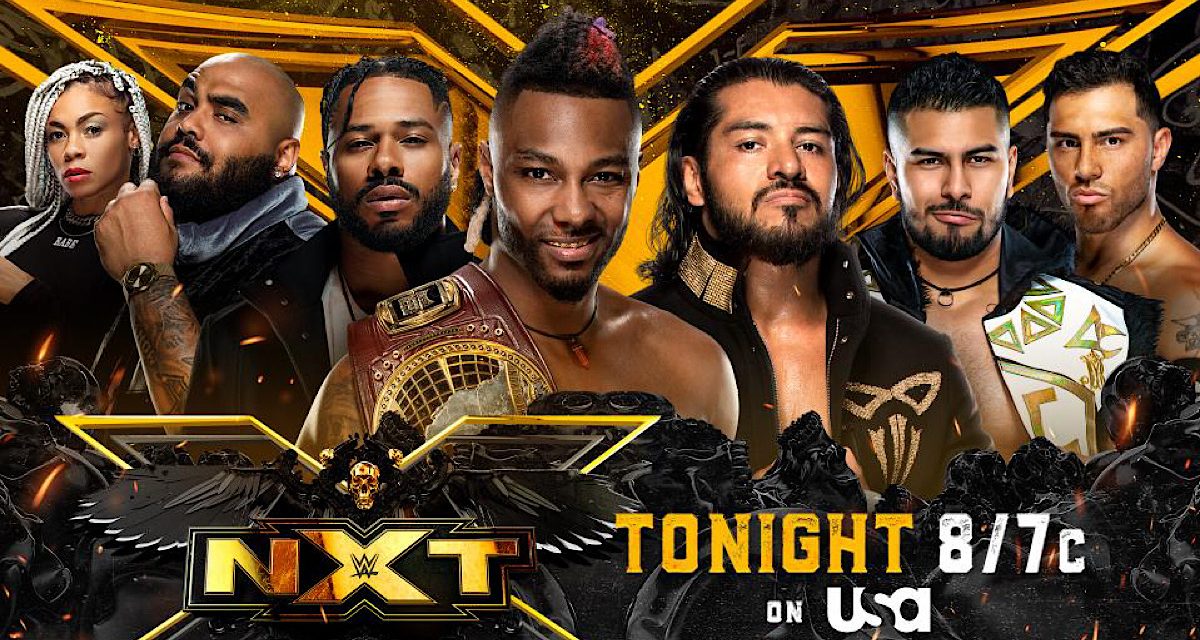 Following Sunday’s hot NXT TakeOver 36 event, tonight’s pre-taped fallout show was highlighted by a six-man faction warfare match between Hit Row and Legado del Fantasma, who shined underneath the spotlight. Plus, Odyssey Jones and Carmelo Hayes competed in the 2021 NXT Breakout Tournament finals match, wrapping up the weeks-long bracket. So, it appears NXT is prepping for the supposed revamp. But tonight, NXT was the usual dark, underground, and grimey black-and-gold brand.

Speaking of grimey, tonight’s episode opened with the Million Dollar Champion Cameron Grimes and Ted DiBiase, who arrived outside the Capitol Wrestling Center in a limousine. In-ring, the duo shared their props and congratulations before going “to the moon.”

The matchup revolves around “slapping meat”, as they say, but it isn’t pretty — much like “Toothless Timmy” himself. The competitors lethargically grapple about before picture-in-picture, which Holland dominates throughout with a series of chinlocks. They trade strikes, and Thatcher attempts a comeback until Holland reverses with a finishing slam for three. Ciampa ignites the energy, fighting back against Holland and Dunne. But on the outside, Oney Lorcan and a returning Danny Burch take him out. Being fair to Holland, the Brit is coming back from a gruesome leg injury. But tonight’s opening bout was desperately missing some oomph.

Commentary dubs Catanzaro and Carter the “TikTok tag team of NXT”… Anyhow, the newly formed duo of Dolin and Jayne make quick tags before Carter initiates the comeback. She assists partner Catanzaro with a 450 Splash, pinning Jayne for the victory. “The TikTok tag team tallies another triumph,” is a verbatim line from commentator Vic Joseph, which is almost as baffling as Dolin and Jayne losing here.

Kay Lee Ray is coming from NXT UK, where she reigned as NXT UK Women’s Champion throughout the pandemic. She’s got easy competition against Peroz, who tries fighting back. But the Gory Bomb from Ray quickly puts it away. Here’s a fun fact: Ray held the NXT UK Women’s Championship for a record 649 days, with assistance from tag team partner Coronavirus, which shut the world down.

Gigi Dolin and Jacy Jayne are met backstage by Mandy Rose, who says, “Ladies, if you never want to feel like this again, come with me and never look back.” The tag team obliges, because who wouldn’t.

The brand new NXT Champion Samoa Joe makes his entrance, but he “did not come dressed to celebrate.” Instead, he issues a challenge to whomever accepts, and Pete Dunne, “The Million Dollar Megastar” LA Knight, and bruised-and-battered Kyle O’Reilly appear one by one. But Ridge Holland attacks O’Reilly, and Dunne fends off an attack from Tommaso Ciampa. Ultimately, the NXT Champion Samoa Joe stands tall — and would undoubtedly have a great title match with any aforementioned option.

Kyle O’Reilly is met by 6’5” Duke Hudson backstage, which inevitably results in a pull-apart brawl. Let’s delve into this: O’Reilly slapped Hudson, he’s clearly in the wrong.

Hayes and Jones were the standout competitors in their brackets, so this finals matchup is fitting. But Jones clearly stands above, notably hitting a super high hip toss and pouncing Hayes preceding commercial. Hayes, however, targets the knees and connects with snappy offense, eventually grounding Jones with a huge top-rope scissors kick. He misses the second attempt, and Jones delivers a big splash. But Hayes reverses the pinfall into a crucifix, ultimately pinning Jones to win the 2021 NXT Breakout Tournament. Odd and unpredictable decision, but it’s respectable! General Manager William Regal meets Hayes with a contract, allowing him to compete against a champion of choice.

Pete Dunne and his three geezers — Ridge Holland, Danny Burch, and Oney Lorcan — put the locker room on notice. Where’s Pat McAfee when you need him?

Johnny Gargano is back to annoy General Manager William Regal, specifically about InDex’s wedding. LA Knight bursts in to complain about Samoa Joe’s “big bowling ball head” before Regal finally shuts them out. Really though, look at how enormous Samoa Joe’s head is.

Malcolm Bivens is at the Diamond Mine training facility, where Roderick Strong is teaching a “masters class”. Strong will be issuing another open challenge, which hopefully he’ll win this time.

Hit Row and Legado del Fantasma had a pretty enjoyable main event, proving that both factions are ready for more prominent positions in NXT programming — at least more screen time than Pete Dunne and Ridge Holland, please. Besides the six-man and the solid Breakout Tournament finals match, tonight’s episode of NXT felt somewhat unexciting, which seems to be habitual for post-TakeOver shows.