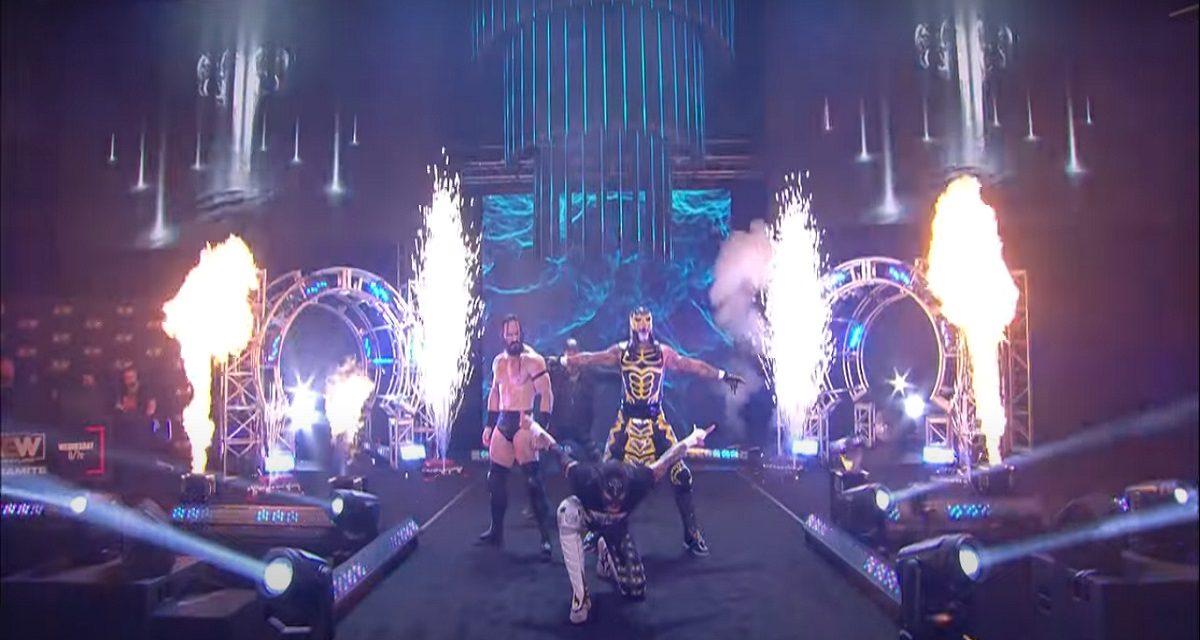 As much as I dig Dark Elevation and Dark, I do love it when both shows are under an hour as it makes for a quick evening. I also dig when there is a live audience which makes the show more fun to watch and both crowds did not disappoint, especially the United Centre crowd in Chicago.

Matchwise, there were a number of good matches on both nights. If I have to pick one, I’d go with Dark Order vs Death Triangle which was the main event on Dark Elevation. It had good action and pushed the Pac/Andrade storyline and the tension within the Dark Order. That said, I will hear arguments of the Dark Main event being the best match of either night as well. Best Friends and HFO had an entertaining match and I’m not even really a fan of Matt Hardy’s current character.

Kudos to Dante Martin who had two really good matches on both nights. He is one of the young guns of AEW and I hope this guy gets an opportunity in a main program. I’d also be remiss if I didn’t mention Anthony Bowens and Alan ‘5’ Angels who are also some up and comers in AEW (and incidentally were Martin’s opponents in his matches).

Finally, a word about Orange Cassidy. I know a lot of wrestling fans are not a fan of his gimmick. I’ve been hot and cold on it since I first saw him (although I’m currently hot right now)…BUT….if he can get the crowd reaction he got in Chicago just by putting his hands in his pockets, he’s doing something right.

Tony Schiavone, Paul Wight and Eddie Kingston are on commentary.

1. Dante Martin pinned Anthony Bowens after hitting a flip over cutter. Unlike last week, Bowens came out to the Acclaimed’s normal entrance music. Both guys hit some really good offensive moves such as a beautiful dropkick from Dante and a spinning DDT from Bowens while Dante was in the ropes.

2. Big Swole and Julia Hart promo backstage talking about Diamante and challenging her to find a partner for a tag match.

3. Brian Pillman and Griff Garrison (w/ Julia Hart) got the win over Warren Johnson and Zack Mason when Pillman hit the Air Pillman on Mason to get the pin. This was a good showing by the Blondes leading up to their match in the eliminator tournament.

4. Diamante backstage with Alex Marvez answers the challenge by Swole and Julia and introduces Nyla Rose as her partner.

5. Orange Cassidy, Chuck Taylor and Wheeler Yuta (w/ Kris Statlander) beat Angelico, Jack Evans and The Butcher (w/ The Bunny) when Orange hit the Beach Break on The Butcher to get the pin. After the match, Matt Hardy and Private Party came out to the ramp but left. The Best Friend did the hug giving the people what they want.

6. Tay Conti hit the DD-Tay to get the pin and the win on Promise Braxton in a short match. Despite Braxton getting a little bit of offence, this was pretty much a squash for Tay. She is someone who I think is ready for the main show.

7. In the main event, Pac, Penta El Zero Miedo and Rey Fenix (w/ Alex Abrahantes) beat Colt Cabana, Evil Uno and Alan ‘5’ Angels when Pac hit the Black Arrow on Angels for the pin. Andrade El Idolo, Chavo Guerrero and Jose (at least that’s what Tony called him) came out and sat ringside to watch the match and at one point tried to distract Pac. After the match, Uno and Angels got in each other’s face pushing the dissension within the Dark Order.

This was taped at the United Centre and the crowd was hot.

1. Thunder Rosa submitted Heather Reckless with the Peruvian Necktie in a quick opening match. Thunder Rosa was over with this crowd. Ricky Starks joined Taz and Excalibur on commentary.

2. Brain Pillman Jr and Griff Garrison (w/ Julia Hart) got the win over Ren Jones and Brayden Lee when Pillman hit the Air Pillman and Garrison getting the pin.

3. Powerhouse Hobbs (w/ Hook) hit the Town Business to get the pin on Shawn Dean. After the match, Hook grabbed a reverse sleeper while Hobbs beat on Dean. Ricky Starks cut a promo on Brian Starks.

4. Britt Baker (w/ Rebel and Jamie Hayter) cut a promo on Red Velvet. Velvet came out and went after Hayter. Hayter got the upper hand but Kris Statlander ran out before Britt, Rebel and Hayter could do further damage.

5. Dante Martin pinned Alan ‘5’ Angels after hitting a straight jacket death valley driver in a very athletic match. Both guys got some impressive offence during the match. These two are young guns of this company and have some serious skills.

6. Penta El Zero Miedo and Rey Fenix (w/ Alex Abrantes) defeated Aaron Solow and Nick Comoroto (w/ QT Marshall) after hitting the double team Fear Factor on Solow. At one point, Comoroto did a one handed press on Fenix while holding Penta in position for a suplex. The Varsity Blondes were ringside and they teased a physical altercation with the Luchas.

7. John Silver and Preston ‘10’ Vance beat Kal Herro and Isiah Moore in a very quick match. 10 got the pin after Dark Order hit a bunch of moves during the finishing sequence such as a powerbomb, spinning backbreaker and a bunch of kicks.

8. In the main event, Orange Cassidy, Chuck Taylor and Wheeler Yuta (w/ Kris Statlander) beat Angelico, Jack Evans and Matt Hardy (w/ The Bunny and The Blade) when Cassidy pinned Angelico using a sit out pin. After the match, Best Friends hugged giving the people what they want.

Thanks and c-ya next week.