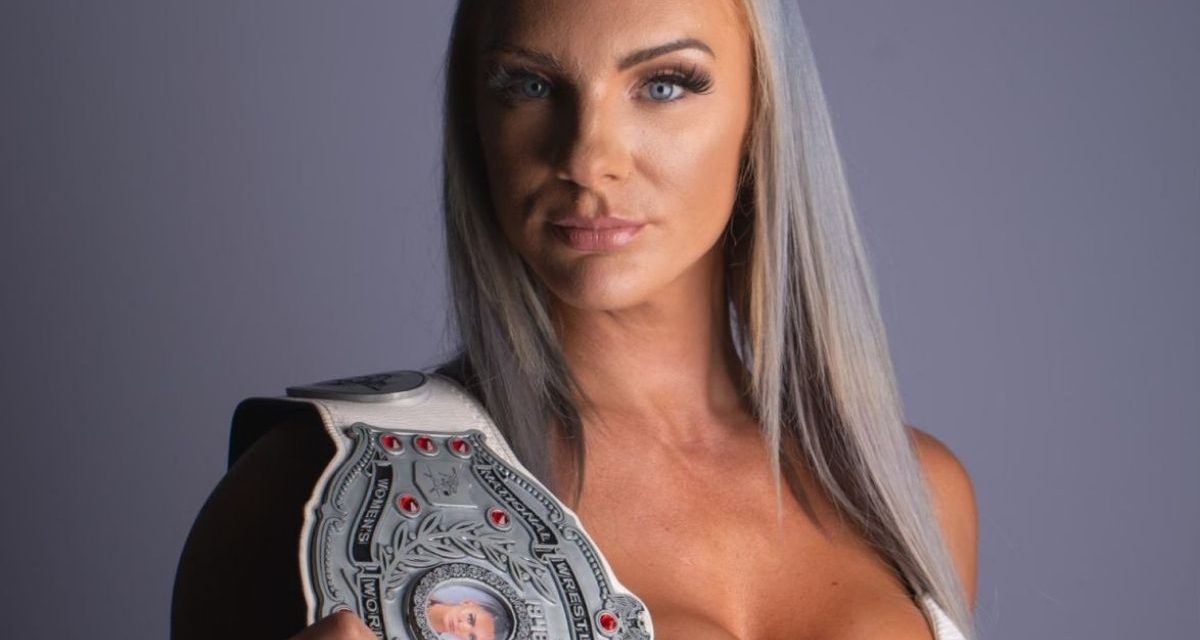 There have been many a pro wrestler whose debut was so striking you cannot help but take notice, such as Chyna or Brock Lesnar. Another name to add to the list is Kamille, the current NWA Women’s champion.

Since her introduction as the “insurance policy” of Nick Aldis at NWA 70, Kamille has progressed from an imposing figure alongside the NWA World champion to becoming a champion herself.

But it all started in Aldis’ corner, an idea from David Lagana, then-vice president of the NWA. “He sent me a message and was like, ‘Hey, are you really done wrestling? Like what’s going on?’” Kamille recalled for SlamWrestling.net. “And I just said, ‘I’m not sure.  Why? What do you got for me?’ And Aldis explained the ‘insurance policy’; that it might just be a one-off.”

There were no expectations beyond that first appearance … but things change. “We realized it was such a strong-looking package, and there was something there. Once it happened, we continued that working relationship,” she said. 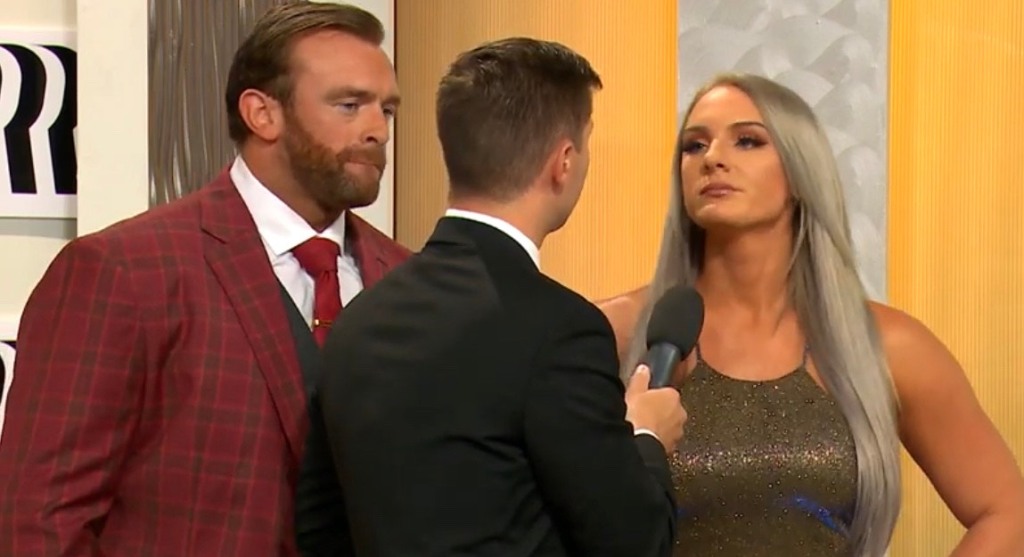 Kamille is silent alongside Nick Aldis on NWA Powerrr.

The matchup between Aldis and Cody Rhodes vying for the vaunted Ten Pounds of Gold was enhanced by having the muscularly-imposing 5-foot-10 Kamille as a silent enforcer to counter Brandi Rhodes. It impressed the fans — and the NWA owner. “Even Billy Corgan told me afterwards, ‘You played your role perfectly.’ The whole point is I’m out there to protect Nick, but not take anything away from him.”  Her role was as a silent enforcer.

The gimmick changed through time. “That sort of happened organically and then we realized that the fans got into it,” Kamille explained. “We really didn’t have a reason at that point and then we were like, ‘Hey, let’s play off of this and keep people guessing like, well, why isn’t she talking?’ So we just kind of played off of the fans’ reaction to it, and just kept the story going from there and then rode with it as long as we could.”

That push built with each episode of NWA Powerrr in 2019 going into 2020, and was going to lead to her debut match heading to their next PPV for the Crockett Cup. “I mean, it was supposed to be a really big deal,” Kamille recalled. “Then COVID-19 [happened], and then we stopped filming and that episode of my first match, they ended up being on its own, type of special thing.”

The match in question was taped and played on YouTube in the early months of the pandemic. “Yeah, and I really wanted my first ever time talking to be in front of a live audience.”

The accompanying promo revealed a whole new side of “Kamille Brickhouse” and let fans know about Kailey Farmer, who was a gifted athlete, whether it be baseball or football, before she got into wrestling. She narrated the YouTube video. “I will say it was it was David [Lagana’s] idea to do the voiceover for the promo.”

The pandemic has meant hard times for everyone, including Kamille. “[It] just took a lot of wind out of the sails because we weren’t sure if we were going to come back. That was a really rough time.” There wasn’t even a place to practice. “We didn’t have a ring to work, in fact, because the school that was here in Clarksville [Tennessee] shut down.”

Of course, ever the athlete, Kamille found a way. “I had every reason to just sit and be a couch potato and gained 20 pounds, and I was like, ‘Well, I can’t let that happen.’ So I did my first ever bodybuilding show, [and] actually got my real estate license. So I did a couple of things just in my personal life to keep busy.” She had a great showing at the 2020 Daytona Beach Bodybuilding Classic, and won first place overall.

Her folks were in attendance that day, along with longtime boyfriend Thom Latimer (previously known on IMPACT as Bram) who surprised Kamille by popping the question. Did she expect a marriage proposal? “It’s funny, actually, because my parents came all the way to the show in Florida,” she laughed at the memory. “And I told them and I was like, ‘You guys, I’m going to be on stage for, you know, a couple of minutes total. I’ll send you video. You don’t need to drive all that way.’ But they were like, ‘Oh no, we want to come.’”

As the world slowly reopened, Kamille had been on a tear through the women’s division of the NWA, with her crowning achievement being winning the NWA Women’s championship — “The Burke,” in reference to the legendary Mildred Burke — at the When Our Shadows Fall PPV against “The Woman of a Thousand Holds” Serena Deeb. “I was so excited to go into working Serena. I just have heard nothing but amazing things about her,” she recalled. “I was really looking forward to it, and just being able to get in the ring with someone so professional; someone that’s been doing it for so long. I was really honored and felt it was very special to be able to get The Burke from her.”

Recently, Corgan purchased the original NWA Women’s title belt from the estate of Mildred Burke. “I was really excited just because everyone knows how historic and how amazing the Men’s World Heavyweight championship,” Kamille explained. “And now I feel we, as women, get a special part of history, too.”

Wrestling at the historic Khorassan Ballroom of the Chase Park Plaza in St. Louis is another thing that has left Kamille awed. “We went to St. Louis for a press conference, and we got to check out The Chase ballroom, where we’ll be having the wrestling [PPV], and just look up and see they have the original lighting there, and the original carpeting… you know, all that stuff is still there that they wrestled 38 years ago, that is something,” Kamille said. “It’s really crazy to think that we’re going to be in the same building. Doing the same thing that Ric Flair, that Bruiser Brody, that Harley Race did, and now we’re going to be there bringing it back.” 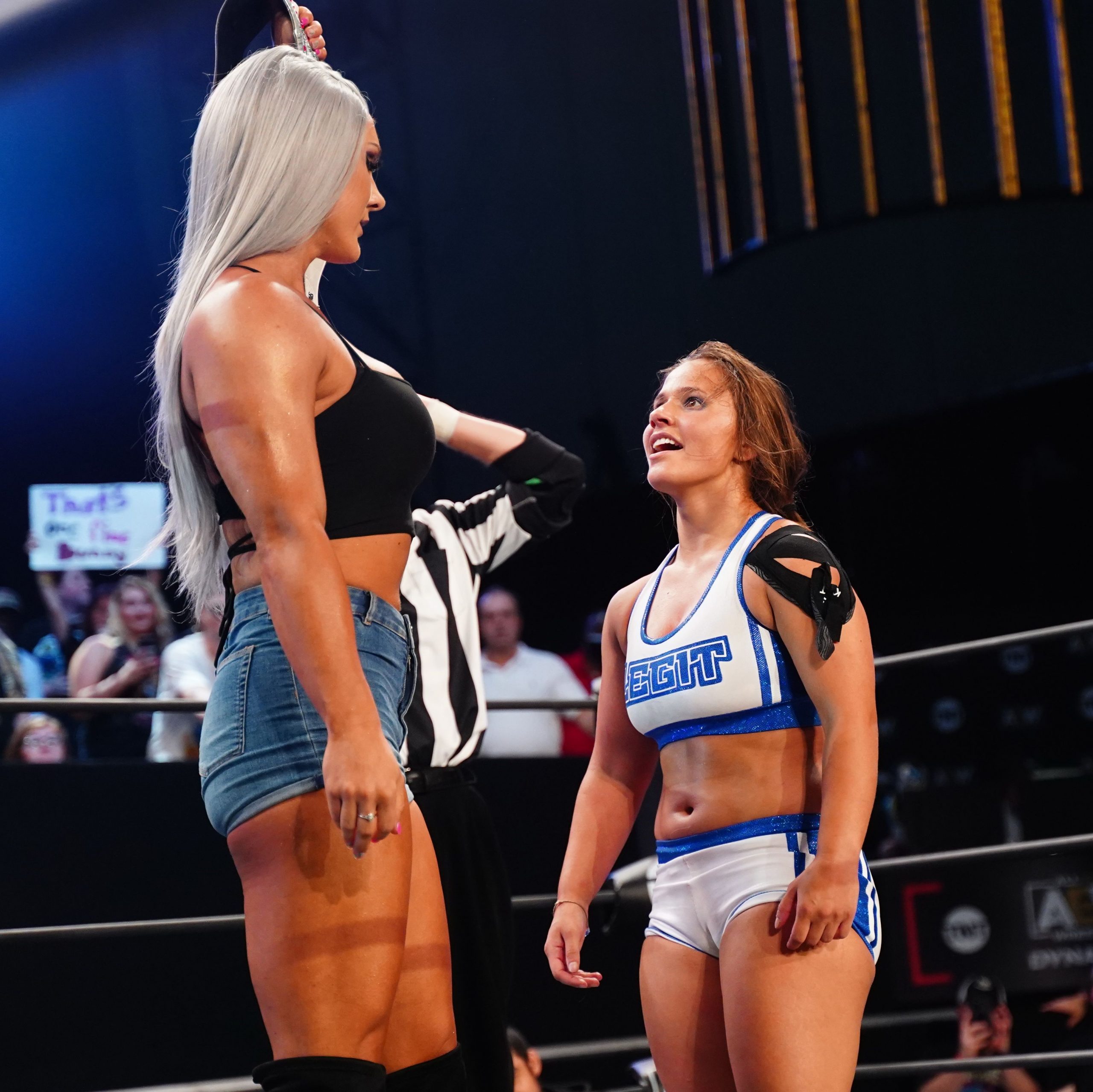 With the EmPOWERRR and NWA 73 pay-per-views coming up, where Kamille will be doing double duty facing “Legit” Leyla Hirsch at the all-women’s show, and the following night, the winner of Saturday’s NWA Women’s Invitational. Confidence is another of Kamille’s calling cards. “It’s not a matter of if I beat Layla,” Kamille said. “I’m going to have to work the next night and there’s really no way for me to prepare for that or the opponent because I have no idea who it’s going to be.”

Scouting the ten participants in the Invitational is tough. “I can kind of pick apart each and every one of their game plans, how they work and how they wrestle. But I just go into it and, like I said before, I kind of always just do me and make sure that I’m in the best shape that I can possibly be in,” she explained.  “Because the only thing that’s going to stop me is if I just pass out because I’m too tired. I just have to make sure that I’m in the best shape possible and bring my A-game.”

Both pay-per-views and the accompanying fan fest feature that missing element from the pandemic. “I’m just looking forward to having fans back, man! I mean, just getting that energy back from the fans, it’s something that I’m super stoked about,” Kamille said. “Because it’s one thing to wrestle and you’re really focused on what’s going on inside the ring. But the thing is, like I said before, when you get tired, you don’t have any energy feeding back into you. So, having fans there to really push you and keep you going; that’s something that is you can’t recreate.”