The past couple of years have been life changing for Kiera Hogan with her rise in the Knockouts division at Impact Wrestling and her new relationship with fellow Knockout Diamante.

Hogan transitioned from independent wrestling to Impact in 2017 and realized that she had to gain a wealth of knowledge. 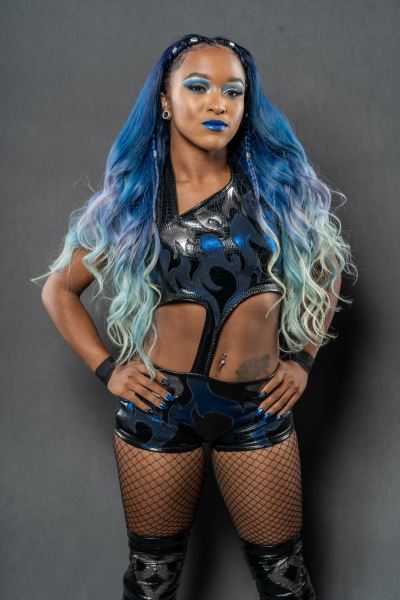 “I had to learn a lot. I’ve had to grow a lot. I’ve had to evolve a lot. I learned so much in my first week at Impact and it went from there. I just grew a lot as a person and as a performer, and as an individual within the company. I’m glad that I’m here for another two years so that I can continue to grow and develop as a performer,” Hogan recently told SLAM! Wrestling.

Each Knockout added another layer of development to Hogan. “All of the Knockouts have definitely helped me. Rosemary with character development, Tessa (Blanchard) with the business aspect, Taya (Valkyrie) with the glamourous side, Gail (Kim) with her wisdom of the business. Every one of the Knockouts because that’s who I’ve worked with the most has helped me a lot. Tessa was the first person to tell me in a No-DQ match that, ‘I’m going to get that fire out of you because I know what’s in there. You’re just too nice sometimes. You say that you’re on fire but I want to feel it,’ and she really helped me understand my character more than me just saying, ‘I’m the girl on fire.’ She actually made me feel it.”

While Hogan is at the top of her wrestling game, she is also at the top of the world personally with her relationship with fellow knockout Diamante.

“We always talked about how we felt about each other. We just have a really, really strong connection. She makes me happy and I make her happy and we couldn’t contain our happiness. Personally, I just wanted to share this information. I want to shout across the rooftop. I want to scream my heart out and I was just sitting in the locker room at an Impact TV taping in Windsor and Tessa, Jordynne Grace, and Alisha Edwards were sitting around me and asking me, ‘You just look so happy, why don’t you share that information?’ I was genuinely happy and even my friends could feel it. So they helped give me that little supportive push because I feel like I needed it because I was scared about judgement, scared about what people would think, scared about what people would say,” confessed Hogan.

After Hogan publicly announced her relationship with Diamante, Impact Wrestling gave her a platform to support the LGBT community with a series of events in Chicago, where Impact Bound for Glory takes place on Sunday, October 20th.

“I’m so excited to be able to have this opportunity to share my story because I would have never thought of even coming out or being this open. They (Impact Wrestling) is putting it at the forefront and given me my own tour to tell my story. I think it’s pretty awesome to be in this position and I’m truly blessed and grateful.”

The future seems bright for the girl on fire both personally and professionally. “Me and Diamante are long distance so we will eventually like to be closer with each other, like in the same place! Professionally, I just want to continue to grow. I want to continue evolving and be different. Being an individual and not be ridiculed for being somebody else or being something that I’m not. I want people to know me for me and not for what they see or get hints of online. I want people to see my growth as an individual. With this new darker character I’m doing, I’m pretty sure that I’m going to get a whirlwind of ideas. I’m just excited to see what the future holds for me in general.”