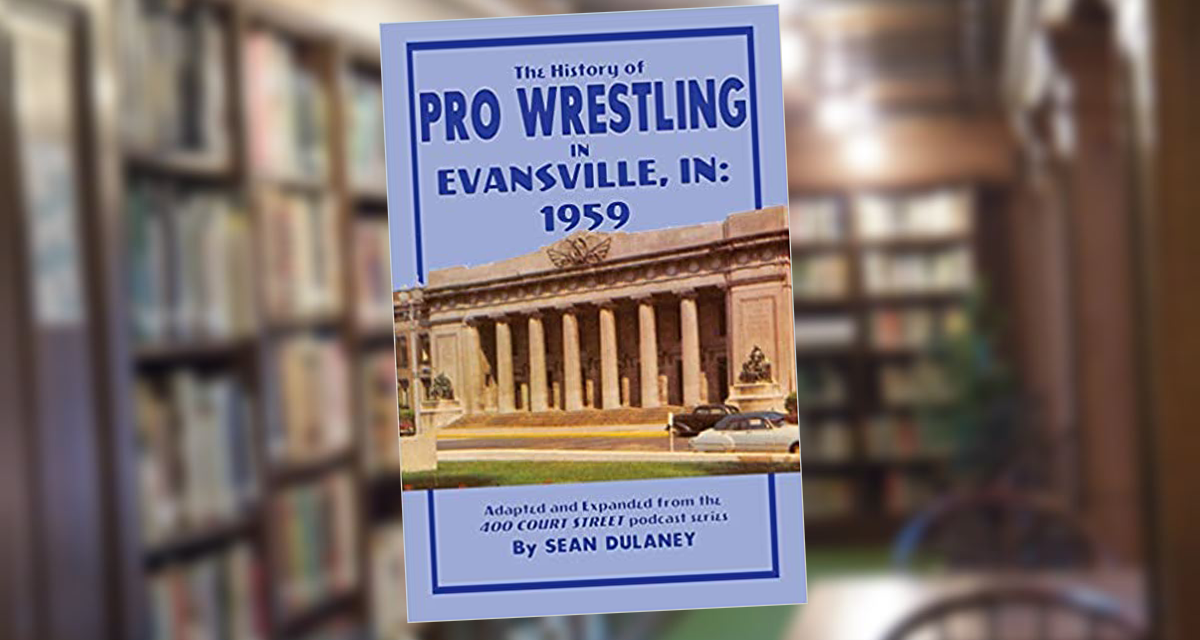 Like many pro wrestling fans Sean Dulaney has fond memories of staying up late to watch pro wrestling on Saturday nights. Dulaney, fueled with ample amounts of Mountain Dew and pizza, grew up watching the stars of the Memphis pro wrestling territory (he counts Jerry Lawler and the tag team The Fabulous Ones as his favorite wrestlers) and Angelo Poffo’s International Championship Wrestling (ICW) out of Kentucky. 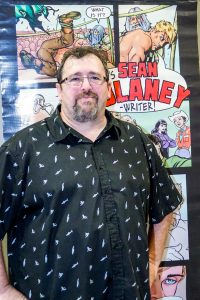 Dulaney, a lifelong pro wrestling fan and comic book writer, has now channeled his passion for the squared circle and its history into his first pro wrestling book, The History of Professional Wrestling in Evansville, IN: 1959, out now from BiMor Press.

It all started with a podcast. Dulaney, who by day is an operations manager for some local radio stations, thought it would be fun and interesting to do a podcast on the history of wrestling in Evansville, Indiana. Dulaney pointed out that Evansville was one of the three weekly towns that the Memphis pro wrestling territory would hit each week with live pro wrestling! On Monday it was Memphis, Tuesday was Louisville and Wednesday was Evansville.

Thus the 400 Court Street podcast was born. The weekly show debuted in the summer of 2018 and ran on Sunday mornings. Dulaney said he took on the role of host, head researcher, primary interviewer… basically everything!  Season one of the podcast consisted of approximately 50 shows. Season two is currently on hold with the outbreak of COVID-19 increasing Dulaney’s work responsibilities. Dulaney decided to adapt the scripts from the podcast into a book.

“There was such a rich history of Evansville wrestling,” said Delaney, who resides in New Haven, Illinois, in a phone interview with SlamWrestling.net. “I mean we had the NWA (National Wrestling Alliance) champion (Pat O’Connor) coming through on a regular basis. We had Lou Thesz. We had Buddy Rogers. We had all of these stars of the business. It just really intrigued me and 1959 in particular, I wanted to focus on because that was sort of the beginning of the end.”

Continued Dulaney, “I was shocked there was wrestling before 1972 in Evansville because thanks to YouTube and a lot of the Evansville tapes of the Memphis show being available online, it’s seen as a Memphis town. That is the only thing people think about with Evansville. But really, Jerry Jarrett and his mother reopened the town in 1972 after it had been dormant for a number of years. And starting in 1959, I basically get to tell the story of the last great run that promoter, Leon Balkin, had in the town and also get to explore why things went dark.”

Dulaney relied on newspapers for the bulk of his research into the podcast and the book. He revealed that at one point, Evansville had three different newspapers in publication: the Evansville Courier, Evansville Press and the Evansville Journal. Today there is only one, The Evansville Courier & Press. During his research, Dulaney was pleased to discover that the area’s local library had recently added the complete run of the Evansville Press to its digital archives as he “found that the Press would often go much deeper into their coverage of the local wrestling office than the Courier.” Dulaney shared that when he was in high school, he even remembered picking up the Thursday edition of the Press to read the results of Evansville’s Wednesday night live pro wrestling shows. Sadly, the days of newspapers giving any kind of coverage to pro wrestling today is pretty much unheard of. 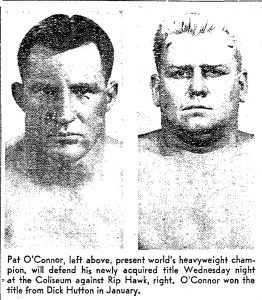 Caption from the book: Promotional blurb from the March 10, 1959 Evansville Press.

Dulaney added further, “As I go back into the ’50s and early ’60s, there was definitely more in-depth (newspaper) coverage. And I attribute that to there being an Evansville office, there being someone in town whose primary focus was getting people through the doors of the Evansville Coliseum. So, there would be a story on Thursday, the day after the matches with the results. There would be a story either on Friday, Saturday or Sunday announcing matches for the next week. There would be an article on Tuesday going, ‘Hey, tomorrow night at the Coliseum, this is going to happen.’ And they may even mention something that happened on the Saturday night TV (on) Wednesday morning…and then the cycle would begin again on Thursday. I mean, there would be a push! Balkin did not buy ads! As I go through all these old issues of the newspapers, there are no ads per se saying here’s the lineup. They would do full articles!”

For this book story, Slam decided to consult an expert and reached out to pro wrestling historian and 2018 James C. Melby Historian Award winner, Don Luce, 82, to provide his thoughts on The History of Professional Wrestling in Evansville, IN: 1959:

The book The History of Professional Wrestling in Evansville, IN: 1959 by Sean Dulaney is an interesting read. It covers 1959, one of the later years in the career of promoter Leon Balkin. Balkin came to Evansville as matchmaker in 1941 and promoted there until he sold out in 1961.

The various pro mat shows are covered using the months of the year for each chapter of Dulaney’s book. Balkin’s weekly live television cards from the WTVW studio helped to get his regular Wednesday night wrestling shows in Evansville over to the public. Before the main event of his last card of 1959, Balkin was commissioned a Kentucky Colonel.

Dulaney paints an interesting book which is good reading.

For Dulaney, Balkin was an effective promoter but he was plagued with some incredibly bad luck.

“He (Balkin) was a hard luck promoter,” observed Dulaney. “One of the first ever wrestling shows he promoted, he had a sellout in Cleveland and he wound up having to refund the money because it was an outdoor show and they had a massive rain. And another time he had this massive show planned and it turns out that was the night that (Franklin D.) Roosevelt got the nomination for (U.S.) president. So, nobody shows. I mean, the man had a difficult time as a promoter. But he was good. He was good at what he did.” 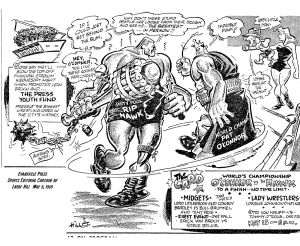 An Evansville Press sports editorial cartoon by Larry Hill from May 9, 1959.

Because of Balkin, Dulaney says Evansville experienced plenty of high points in pro wrestling in 1959. Hawk becoming a star attraction immediately comes to mind. Hawk not only wrestled in Evansville on a weekly basis, but he also moved to Evansville to live. Despite being a heel, Hawk immersed himself in the community and was even “scheduled to drive in the (local) stock car racing program.” On Hawk’s racing debut, Dulaney writes in the book: “As for Hawk’s race on Labor Day, the grappler took the #68 midget racer onto the track for some practice laps, but once the racing started, the car’s engine blew while piloted by another driver, causing that driver to suffer burns to his legs when sprayed with hot oil and water. Due to the time taken to clean up the track and the lack of another ride, Rip would forgo racing and leave for his match in Owensboro.”

But there were some low points in Evansville, too. Dulaney said that the old pro wrestling adage of “the card is subject to change,” really resonated with the local pro wrestling fans towards the end of 1959. There were a lot of substitutions to endure at the live Evansville shows. There was also the time Gorgeous George no showed.

“This was when he (George) was kind of in a bad place in his career,” reflected Dulaney. “He had lost a hair match so he was coming into the ring wearing a wig. He had lost the hair match so you didn’t get to have the full effect of having Gorgeous George come to town. And they sold the no show as he was injured in a car crash. And he was supposed to be on TV after his first appearance in Evansville in ’59. He was supposed to come in for the Saturday TV. He no showed. And he was supposed to face Hawk at the main event Wednesday night and he no showed. So, what was essentially going to be a dream match for the local fans never happened.”

Dulaney hopes readers will “appreciate the history” he is offering in his book and in the case of some fans, reignite their passion for pro wrestling, by remembering what drew us to it in the first place.

“(I’d like readers to) appreciate the fact that yeah, (pro wrestling is) a work,” concluded Dulaney. “Yeah, things weren’t always on the level. But it’s like a magic trick. Keeping the illusion. You enjoy the magic trick more when you have no idea how the sleight of hand has been done. That’s the whole point of it and so much of that has been lost.”

“The mayor (of Evansville) was at the match and a riot broke out,” Dulaney explained incredulously. “He seized the box office and basically put a ban in place that lasted until he died. That is going to be a fun one to do!”