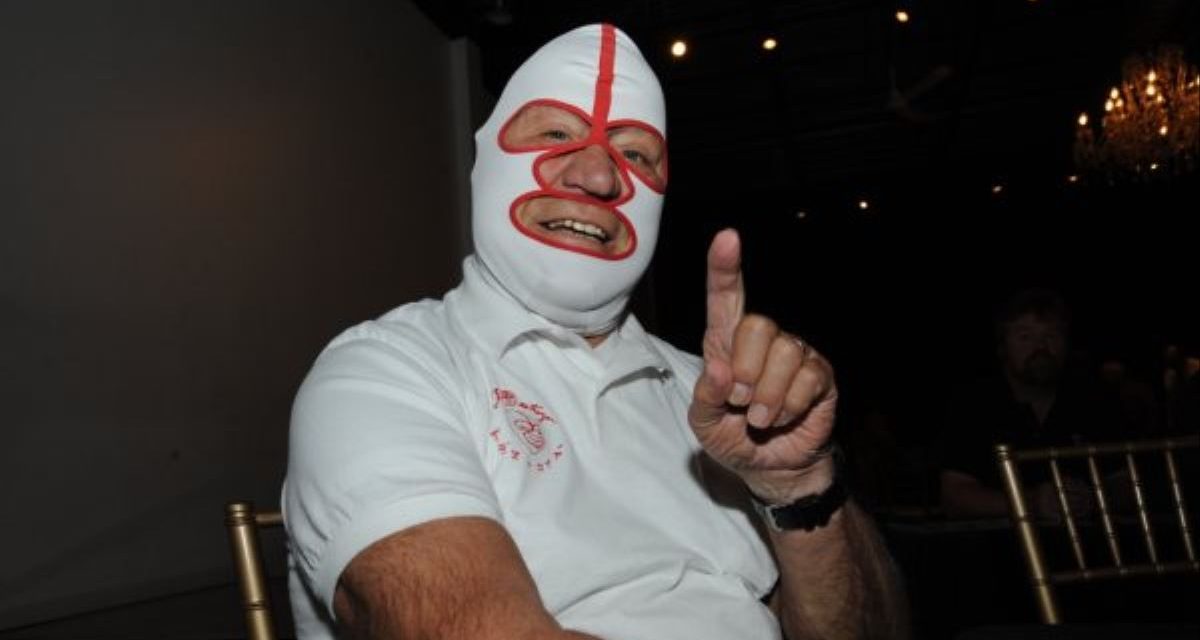 Dick Beyer, who left an incredible legacy as The Intelligent, Sensational Destroyer, as former AWA World champion Doctor X, and as a coach, died today, March 7, just after noon eastern time in his home just outside Buffalo, New York. He was 88.

“It is with a very heavy heart to let you know that Dad — aka The Destroyer, aka Doctor X, aka Dick Beyer, aka Coach — passed away shortly past Noon today. He was in bed at home, and was surrounded by all of his children and wife as he slipped peacefully away. I will have more to share later, but wanted you to hear this sad news from me first. Thoughts and prayers are most welcome at his time. Peace.”

The story of Dick Beyer’s transition to the Intelligent, Sensational Destroyer has been told often, but it is a tale worth sharing again.

It starts with a women’s girdle.

Beyer went into California in 1962, expecting to be a fan favorite, when Jules Strongbow told him he was going to wear a mask and wrestle as The Destroyer. A clean-cut, all-American type for most of his career, Beyer didn’t have a mask, so Vic Christy lent him a miserable woolen contrivance that stretched around his head and body, and buttoned in the crotch. “I got claustrophobia, I couldn’t breathe, I couldn’t do anything in the ring,” Beyer said. “I tore the mask off and I threw it at Hardy Kruskamp, who was the promoter in San Diego, and I said, ‘Hardy, tell Jules Strongbow up in L.A. that he’s seen the first and last of The Destroyer.’ ” Fortunately, Ox Anderson tossed him a more comfortable mask made from a woman’s girdle. “Gee, this is great, I can see, I can breathe, I can probably eat with it,” Beyer remembered thinking. The next day, he went shopping for girdles at Woolworths in San Bernadino, Cal., and the rest is history.

“The Destroyer?” Fred Blassie asked during a 2003 radio interview with Jeff Walton of the Los Angeles territorial office. “Greatest masked man there ever was. He was very scientific, knew all the ins and outs. He had an answer for everything. The Destroyer would have to go down as one of the top 10 wrestlers of all-time.” Oddly, it was Blassie who got Beyer to Los Angeles in 1962. The two wrestled in Hawaii, and Blassie excitedly returned to the Los Angeles office proclaiming Beyer the best babyface in the country. In the meantime, Beyer planted the seeds of his bad guy image by shaving his head and adopting the sarcastic personality of the Intelligent, Sensational Dick Beyer.

Intelligence aside, Beyer, born July 11, 1930, was closely identified with the East Coast before he gained worldwide fame. The Buffalo, N.Y., native wrestled Don Beitelman, later Don Curtis, in the Niagara District AAU finals in 1951, and lost 5-3, but local promoter Ed Don George took notice and told him to keep his options open.

Beyer was a guard on defense and a fullback on offense in the days of two-way football in high school. He was named the top prep player in Buffalo in 1948 and Mike Calandra of the Buffalo Evening News called him “one of the most talented linemen to come out of Buffalo in recent years.”

After playing on the freshman team at Syracuse University — first-years were ineligible for the varsity in those days — Beyer played right tackle and defensive guard as a sophomore in 1950. But just a month into the campaign, he went down with a season-ending broken collarbone. He recovered in time to join the wrestling squad and participated in the Eastern intercollegiate championships.

Beyer played tackle on Syracuse 1951 team, which finished 5-4 and blossomed as a heavyweight wrestler. A hint of a career to come occurred in March 1952, when pro star Verne Gagne, in town for a match, visited the Syracuse wrestling team. Gagne worked out with Beyer and announced Beyer “shows considerable promise.”

Beyer won three letters in wrestling, placed second in the 1952 Eastern intercollegiate championships, and also won the 1952 AAU heavyweight championship for the Niagara District. Back on the gridiron for his final season, Beyer played guard on offense at 207 pounds. The Orangemen went 7-3 and earned the school’s first bowl bid, though Alabama whacked them 61-6 in the Orange Bowl. Beyer continued wrestling in college and in the AAU as he worked on a master’s degree before turning pro in 1954. Working out of Al Haft’s Columbus, Ohio, office, he debuted on October 23, 1954, in a TV draw against Eddie Albers (Ed Miller). He and Ray Stevens were on the losing end of a tag match in Baltimore in December against Dick Hutton and the Zebra Kid.

Beyer was a talent, no doubt, as Wrestling Life picked him as its 1955 Rookie of the Year. “This is an unbelievably fast rise for one so recently out of the ranks of the amateurs,” Syracuse sportswriter Jack Slattery informed readers. “He doesn’t have blond hair. He doesn’t go into the ring bare footed. He doesn’t have a valet. Perhaps his singularity, in that he simply wrestles, has made him stand out.” 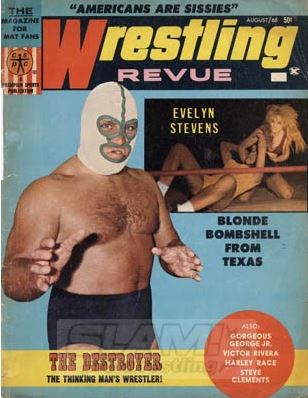 The Destroyer on the cover of Wrestling Revue in August 1968.

But as Beyer recounted years later, there was a glass ceiling on a hero of his size. At 5-foot-10 and 210 pounds, Buffalo promoter Pedro Martinez considered him too small to be a main eventer, and Beyer mortgaged his house to guarantee the gate in Cleveland, Ohio, one night, for a shot at reigning bad guy Fritz von Erich. So when the chance came to switch his colors, he jumped at it. “I wrestled as Dick Beyer for eight years. And wrestling as Dick Beyer for eight years, when I’d lose, people would say, ‘Ah, that Dick Beyer, he can’t win.’ It’s kind of like baseball teams that lose or football teams — the people don’t want anything to do with them. When you’re a good guy, you have to win. But when you’re a villain … I changed to being a villain as The Destroyer and I had people come to watch me just to see me get the hell get kicked out of me.”

The wrestling brass said the mask was great because it hid Beyer’s looks while letting him turn up the volume on his personality and showcasing skills unusual for a villain. Now, he was a great, athletic wrestler with a growling voice that everyone loved to hate. “He was one of the best real wrestlers who ever lived,” said Los Angeles promoter Mike LeBell. “We had a thing that he never had his mask taken off. The only trouble he had was whenever he went places, he went without his mask and some of the fans are too smart they can recognize you. So he wore his mask eating and the whole thing.” Art Williams who refereed and helped to promote Bakersfield, Cal., said Beyer was “in a class all by himself … probably the best I’ve ever seen,” On a scale of one to 10, Williams explained, “I’d give him a 12.”

Strongbow wanted a masked champion for the World Wrestling Association, and Beyer had three turns with the belt from 1962 to 1965. In 1963, he made his first tour of Japan, where he was a smash against Rikidozan, the Japanese wrestling legend. Their TV match attracted nearly 70 million TV viewers and was the second-highest rated TV program in Japanese history. Beyer also was in the American Wrestling Association regularly from 1967 to 1972 as “Dr. X,” a nod toward not wanting to rip the mask off The Destroyer. Beyer briefly held the AWA crown, but considered the piece of synthetic fabric to be his real title. “If you beat me two pinfalls out of three, I’ll take the mask off, and it went over big,” he said.

“The mask was the reason for his success,” said Harley Race, a star in the AWA at the time. “He had a unique thing about him also that Dick could outwrestle most of the guys that were wrestling, and if he had a babyface down and was doing that to a babyface, it got heat. If the roles were reversed, and he outwrestled somebody and they got up and started stomping the shit out of him because he had, then he was a babyface.”

Beyer said he did most of his heel work coming off the ropes, using, for example, a clenched fist to slug his foe. Quietly, he then whispered to a ref, “‘Put that fist up and ask me if I hit him with the fist.’ Then I turned to the people and said, ‘No, I never hit him with the fist. Open hand.’ So with that little exchange you establish heat between yourself and the people. It wasn’t on the referee.”

Tag team partner Don Manoukian liked the way Beyer treated both his profession and the mask with respect, instead of as some kind of gimmick. “You’ll see a lot of bad guys, they’ll have some humor to them. They’ll throw in some comic relief to get themselves over. Dick was a good amateur wrestler, and he was a serious professional wrestler. He was very convincing. He was very believable as a bad guy. He was a very convincing guy. Of course, with the accessory of the mask, it fit. He respected the business, and he’d wear that mask until he was in his bathroom at home. He was serious about keeping his identity.”

In 1973, Beyer inked a pact with Shohei Baba and NTV in Tokyo to wrestle in Japan for six years. He helped Baba establish All Japan Pro-Wrestling as one of the major forces in the business, and starred on a top-rated musical-comedy series called Uwasa No Channel that included skits, singing, and a bit of nonsense. “I’m as popular in Japan as any star in the United States,” Beyer legitimately claimed to his hometown Buffalo paper in 1975. Angelo Mosca put it succinctly: “This was like walking with God in Japan.”

He returned to North America in the late ’70s, and wrestled for several more years before becoming a coach at Akron Central School in Akron, N.Y. He’s a member of the George Tragos/Lou Thesz Professional Wrestling Hall of Fame, the Pro Wresting Hall of Fame in Texas, and the Buffalo Sports Hall of Fame, among others.

The English version of his life story came out in 2011, titled Masked Decisions, and written with Vince Evans. The Destroyer Park Golf course, run by his daughter, Kris, was adjacent to his home in Akron, NY. He was often out there encouraging players.

Even in recent years, Beyer still made regular trips to the Far East, for years taking a group of youngsters in the summer to Japan to compete in a national wrestling tournament.

And the mask stays put. “When I go to Japan now, I’m somebody. I go through customs and immigration and so forth with the mask on. I lived the part and I still wear it.”

Beyer had faced numerous health issues over the last few years and his public appearances got fewer and fewer. He had been in hospice care for a few weeks. His passing came on March 7, 2019. Funeral arrangements are not known at this time.