Mat Matters: Hideo Itami in WWE, how did it all go so wrong? 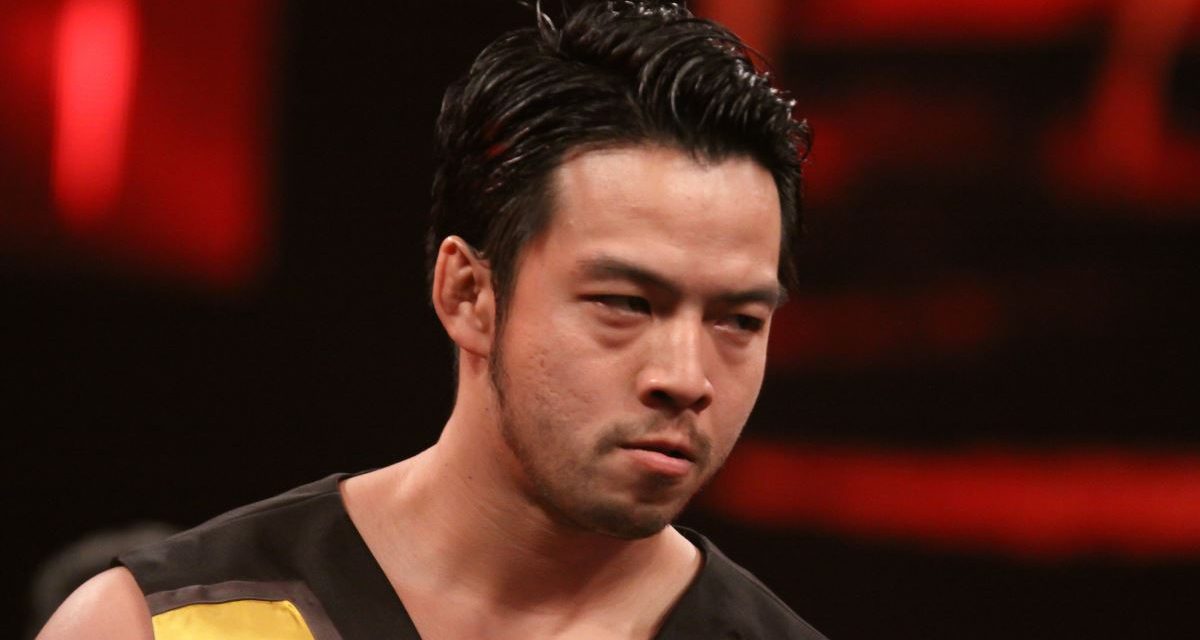 On February 22nd, Hideo Itami was released from WWE, one month after wrestling his final match for the company. That release brought Itami’s five-year run to a close, and now leaves fans wondering where the man formerly known as KENTA will go.

Will he go back to his home promotion of NOAH and reignite his classic feud with archrival Naomichi Marufuji? Will he make the jump to New Japan and try to claim the IWGP Junior Heavyweight Championship from his former partner Taiji Ishimori? Or will he swerve everyone and join All Elite Wrestling instead? 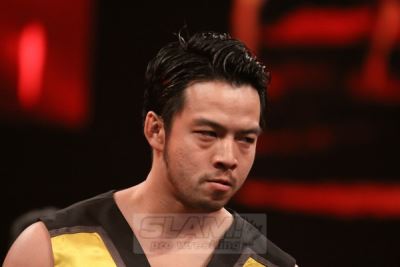 While it’s always exciting to speculate on a wrestler’s future, one must also take stock of what happened in their past as well. Why exactly did Itami flounder so much in WWE? How did one of Japan’s hottest wrestling stars become one of NXT’s biggest disasters?

To understand how and why Itami failed in WWE, we must first look at his career in Japan.

Itami, better known as KENTA in Japan, debuted in All Japan Pro Wrestling on May 24, 2000, alongside his soon-to-be archrival Naomichi Marufuji. Shortly afterwards, Itami, Marufuji and most of the AJPW roster left the promotion to follow Mitsuharu Misawa to his new company, Pro Wrestling NOAH.

One of the biggest reasons they did so was because AJPW under Giant Baba and his wife Motoko, junior heavyweights were not given much emphasis. This was something Misawa wanted to change, which he did with NOAH. Under his supervision, NOAH would have a strong junior heavyweight division, and KENTA would be one of its biggest stars.

Over the next seven years, KENTA became one of NOAH’s fiercest competitors. Trained by the likes of Yoshihiro Takayama and Kenta Kobashi, KENTA adopted a stiff, kickboxing-oriented wrestling style that took the term ‘strong style’ to a whole new level. Because of his diminutive stature (even by Japanese standards, he was small), KENTA had to rely on his realistic and brutal strikes to win his matches.

Over time, KENTA became one of NOAH’s top stars, both in singles and tag team competition. By 2007, word had spread to the United States of this small Japanese man who kicked people with the power of an entire soccer team.

That reputation soon allowed him to wrestle in North America, particularly for Ring of Honor. There, KENTA had legendary matches with the likes of Bryan Danielson, Low Ki, Delirious, and many others. By the end of the 2000s, KENTA’s reputation had spread to a worldwide audience, as people loved watching clips of KENTA striking his opponents with unrelenting stiffness.

But by 2014, KENTA had accomplished everything there was to do in NOAH. And soon, WWE pounced on the opportunity to sign a top Japanese wrestling star that was available at the time. His signing was considered such a monumental occasion that they even had Hulk Hogan preside over his contract signing. It was obvious that NXT and WWE wanted to make a big star out of this Japanese wrestler.

Unfortunately, KENTA went from being a big fish in a small pond to a minnow in an ocean. And that minnow had to struggle with multiple setbacks on his path to WWE stardom.

First, there was the language barrier. Even in wrestling-focused NXT, promos are still critical to a wrestler’s development. Every top wrestler must learn how to cut convincing promos just as much as they need to master WWE’s unique wrestling style. This was a frequent problem for Itami, as the language barrier was so profound that he required an interpreter in Funaki to answer basic questions from backstage interviewers.

This problem would’ve been much worse on the main roster, as Vince McMahon is much more of a promo guy than Triple H. One need only look at Itami’s fellow Japanese wrestlers, Shinsuke Nakamura and Asuka. It has been said that their respective main roster careers have stalled because they do not speak as clearly as their English-speaking counterparts.

Of course, that could’ve been overlooked if Itami could put on exciting matches without hurting his opponents, except for the fact that he couldn’t. Itami’s entire gimmick in Japan was that he suffered from a little man complex and compensated for his short stature by kicking people as hard as he could. On one hand, this made him very popular with both his native Japanese fans and certain sub-groups of wrestling fans that enjoy stiff strikes and ‘how-could-he-survive-that’ kind of brutality.

However, this simply couldn’t work in WWE. Neither the agents nor the wrestlers themselves would’ve been OK with a wrestler kicking someone so hard on a nightly basis — especially in the face and side of the head, which were signature strikes of KENTA’s. So by signing with WWE, KENTA lost a huge part of his mystique and appeal. He couldn’t wrestle at the same level and draw the same sorts of reactions because fans recognized that he wasn’t going to be kicking people’s heads in like he did in Japan. 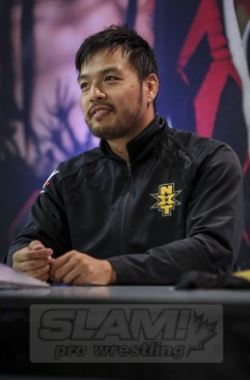 At a Fan Axxess signing.

Yet this could’ve been salvaged as long as Itami had a killer finisher … which he did, but only for a very short while. Back in the mid-2000s, KENTA created a move called the Go 2 Sleep while wrestling in NOAH. While he was in Japan, that move was adopted by a certain WWE wrestler named CM Punk. Although Punk never hit the move with the same stiffness as Itami/KENTA, the GTS did become synonymous with Punk for the WWE Universe. So while a minority of fans might cheer Itami for using his creation, most fans would associate it with Punk instead.

It also didn’t help that Itami was said to have hit his Go 2 Sleep too hard on The Brian Kendrick, breaking the latter’s orbital bone. And even when Itami wasn’t using his famous knee strike, any other signature move he tried to make his own was co-opted by someone else. His Busaiku Knee became Daniel Bryan’s knee strike finisher, Bryan had Itami’s Crossface as well, the Rings of Saturn was Neville’s move (even after Neville had left), and the diving double foot stomp became Finn Balor’s finisher.

So Itami couldn’t cut solid promos in English, couldn’t wrestle in the style that made him famous, and had his most iconic moves taken by other, bigger wrestling stars. But it couldn’t possibly get any worse than that, could it?

Oh, yes it could.

On May 20, 2015, Itami suffered a devastating shoulder injury that put him out of action for well over a year. During that period, Itami, a wrestler once pegged to be in the world championship picture, had to sit on the sidelines and watch as NXT’s popularity exploded and its roster became deeper. While Itami was nursing his injury, wrestlers like Finn Balor, Sami Zayn, and Kevin Owens arrived, tore the house down, and were promoted to the main roster. By the time Itami was cleared to return, his position as the hard-hitting Japanese wrestler was taken by Shinsuke Nakamura.

This was a serious problem as Nakamura had something that Itami sorely lacked: an identity that transcended language and cultural barriers. WWE fans adored Nakamura from the moment his entrance music first played, and Nakamura’s debut match against Sami Zayn at NXT TakeOver: Dallas was a frontrunner for 2016 match of the year.

And Itami? He wasn’t even on the card.

Things didn’t get better for Itami thereafter. Just as he started gaining momentum in late 2016, he suffered a neck injury that forced him to withdraw from the Dusty Rhodes Tag Team Classic. Had that injury never occurred, Itami would’ve teamed with then-freelancer Kota Ibushi, which would’ve likely made them favorites to win the tournament. 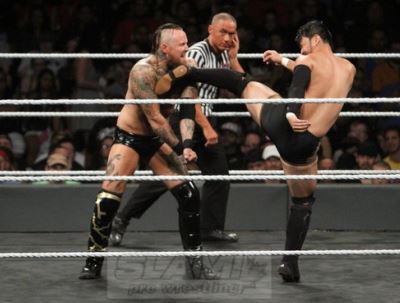 Aleister Black eats a kick from Hideo Itami during their match at NXT TakeOver: Brooklyn in 2017. Photo by George Tahinos

When Itami returned from that second injury, the landscape around him had changed once again. The crew of NXT stars he had debuted with had all gone to the main roster, and there were new stars in the main event. Wrestlers like Bobby Roode, Aleister Black, Johnny Gargano, Tomasso Ciampa, Andrade “Cien” Almas, The Velveteen Dream, and the returning Drew Mcintyre all ranked higher than Itami on the NXT totem pole. These other wrestlers all had assets that Itami didn’t, which meant Itami became less relevant to both NXT’s management and its fans.

Itami did eventually make his main roster debut, but it was for 205 Live, a cruiserweight-only show that has struggled to maintain a strong viewership ever since it was first introduced. That program could’ve been a vehicle for Itami to rise to the top, especially since he already had experience carrying a cruiserweight division when he was such a champion in NOAH. But those dreams never materialized, and Itami became just another guy on the show.

So when all was said and done, Itami’s WWE career was the perfect storm of bad luck and injuries. Not only did he struggle with his own wrestling character and style, but he was outclassed by his peers to such a degree that he looked less significant by comparison.

In retrospect, perhaps he should’ve stay in Japan and simply changed companies. After all, that’s what his former partner Taiji Ishimori did, and look where he is now.