New Japan Cup Night Two: One Canadian is out and one joins Bullet Club 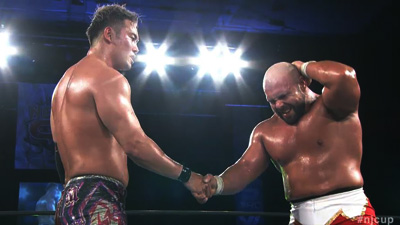 Canada has lost one of its entries in the New Japan Cup tournament. Michael Elgin was defeated by Kazuchika Okada in their Round One match. However, it appeared that a Canadian has joined the elite Bullet Club faction.

In a hard-fought match, Elgin turned a Rainmaker Clothesline into a powerbomb for a two count then quickly transitioned into a crossface. Okada was fading fast until he draped one foot over the ropes.

Okada was Buckle Bombed and took a back fist to the jaw knocking him to his knees. Elgin ripped off his elbow pad. Okada caught Elgin’s rolling elbow Tombstone Piledriving him and then hitting the Rainmaker Clothesline to eliminate Elgin from the tournament. Okada and Elgin shook hands after the match.

Canada’s other entry, Davey Boy Smith Jr., faces Toru Yano in their Round One match on Monday.

In a promo that aired during the middle of the show, it appeared that Canadian wrestler Riley Vigier (El Phantasmo) is the newest member of Bullet Club. Vigier was born in British Columbia and has wrestled for Extreme Canadian Championship Wrestling, PowerZone Wrestling, All Star Wrestling and Revolution Pro Wrestling in England where he won the British J Cup tournament.

Here is the full-length promo:

Will Ospreay beat Bad Luck Fale. Ospreay kicked out of The Grenade and countered a Bad Luck Fall into a rolling pin..even though one of Fale’s shoulders was off the mat. Bad call, Red Shoes.