No less of an authority than J Michael Kenyon called Don Luce, who is being honored by the Cauliflower Alley Club with its 2018 James C. Melby Historian Award, the “undeniable Godfather of our game.”

Luce, Kenyon wrote to me in an email two months before his death in 2017, “has done more to advance the understanding and knowledge of professional wrestling history in this country than any other five people.” A compliment like this from Kenyon, who many wrestling researchers consider the most important historian to ever haunt a microfilm machine, is rare stuff. Kenyon’s unqualified praise speaks volumes to Luce’s critical role in building a history of wrestling that all researchers and fans continue to benefit from, whether they appreciate it or not. 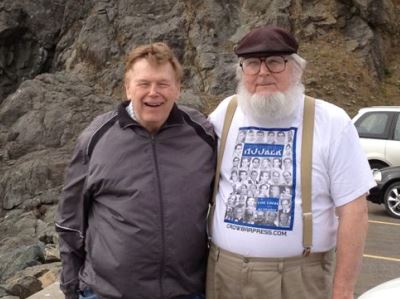 Born in Buffalo, New York, in 1938, Luce became a fan of wrestling first through the Buffalo Evening News, then WGR Radio broadcasts, and finally, Saturday evening television broadcasts of wrestling from Chicago. He’s one of the few living historians who can appreciate wrestling as a non-televised phenomenon.

“Both J Michael Kenyon and I blame tag team wrestling for changing wrestling a lot,” Luce tells me, with a sincerity almost no one else could match.

He attended his first live match in 1957, which featured a main event between NWA World champion Lou Thesz and Gene Kiniski. Suitably hooked on wrestling, his research into its history began in earnest in 1960, when he began looking into Buffalo promoter Ed Don George.

Luce soon began trading findings with other fans through the mail, and first published his findings in his Grunt and Groan newsletter. Luce lists Bob Nitsche, Australian historian Tom Gannon, and Burt Ray among the historians who were most important to him as he was getting his start. His network would grow to include Jim Melby, Fred Hornby, and Mark Hewitt. He switched to baseball research in 1980, and, like Kenyon, he joined the Society for American Baseball research (SABR).

As he busily poured through old newsprint sports sections, tracking down records for balls, strikes, and caught stealings, he found himself encountering the great names of wrestling’s past over and over: Tom Jenkins, Frank Gotch, Jim Londos, Wladek and Stanislaus Zbyszko. He felt a pull to return to wrestling.

“Like me,” Kenyon wrote me via email, “he finally had to forego baseball research — no man could do justice to both.”

“[Wrestling] seemed to be more interesting than baseball,” Don wrote me. “There were few who really know much about it.”

Luce was one of the first historians to seriously research the wrestling of the late 19th and early 20th century. By his own estimation, he’s “likely researched pro wrestling from the Civil War period into the late 1960s as much as anyone.” Curious what was going on in Tombstone, AZ in 1885? Don has a file on that. Little Rock in the 1920s? Check. Daytona in 1955? Covered.

Fascinated, in part, by a desire to track the careers of the great barnstormers who travelled the world, often wrestling under different identities from night to night and city by city, Luce has produced comprehensive studies of wrestling in a number of areas, including the key American cities of Buffalo, NY, and Columbus, Ohio.

“The reason I like to go through results,” he said, “is you find out who some of these guys are. These guys in the ’30s, if you get enough results, you might figure out what name they’re using in another city.”

Luce’s exhaustive findings, Kenyon wrote, “provided the guts of virtually every ‘record’ book published over the past 50 years.”

“It has finally happened,” Don wrote in a 2016 email that shared detailed match results from Waxahachie, Texas, in 1930, “I’m off my rocker for good. In searching for early Dick Raines matches, I ran into the Murdoch brothers. This is the best that I can do, unless I make a trip to Waxahachie to visit burial sites. There were so many people named Murdoch or Murdock in that area, finding one that knows the family history would be tough. When I joined SABR I should have stuck to baseball research.” Don’s chosen path was not one for those lacking in conviction.

He remembers, in particular, a trip to Ohio in 1965 when he encountered legendary Ohio promoter Al Haft. “I had been researching John Pesek at the Columbus Public Library,” writes Don. “On a Friday afternoon I went to [Al Haft’s] motel in Reynoldsburg. Al was plowing a field. He stopped and talked with me about 10 or 15 minutes. I remember him telling me, ‘Don’t take it so serious,’ when I started going into the John Pesek-Marin Plestina business (for more information on John Pesek, go here). “[Al] told me that he had to go back to plowing. However, he said that if I stopped back to the motel that evening, he would show me some of the belts he had. It was before the days of credit cards, and I was running low on money, so I returned back to New York. I kick myself even today for not going back to Reynoldsburg.”

Luce’s work draws uniform praise from the most important researchers working today. The inaugural winner of the Melby Historian award, Scott Teal, wrote me that Luce, “is one of the most committed researchers in the wrestling business and his output of work has been incredible. He was an inspiration to me when I began writing because he was one of the first people I knew who did detailed research and presented material as a true ‘historian,’ as opposed to simply being a result collector or recorder. In my opinion, Don Luce is one of the top five historians ever in the wrestling business.”

Tim Hornbaker, author of the authoritative books Capitol Revolution and National Wrestling Alliance: The Untold Story of The Monopoly That Strangled Professional Wrestling, adds that, “Don’s contributions to the study of professional wrestling are immeasurable. His dedication, over the span of many decades, is something all wrestling historians admire. In my opinion, Don, along with the late J Michael Kenyon, are the true Godfathers of wrestling research and have influenced us all.”

It’s hard to take stock of the time Luce has spent pouring through microfilm and other sources to recover the thousands of bits of information that make up the ever-changing story of wrestling. Without it, it’s unlikely our knowledge would stretch as far as it currently does.

I was fortunate enough to get Don on the phone and walk through wrestling’s history with him. It was a rare treat, and I consider myself lucky to have had the opportunity. He can talk as freely about better-known characters like Gorgeous George and Antonino Rocca as he can about Frank Sexton and Lord Landsdowne.

“Outside the ring it was all dark,” he said, describing the experience of live wrestling in the 1950s. “The only lights were in the arena. That was about it. There was more wrestling in those days, a lot more mat wrestling.”

Through his tireless work and relentless curiosity about the characters from wrestling’s past, Don has built a rich, comprehensive foundation for the next generation of researchers to pick up and build on. “It used to keep me out of the bars,” he dryly responded, when I asked him about what fueled his pursuit.

We’re all incalculably better off as a result of the devotion of Don Luce.