Preeminent historian Fred Hornby, dead at 76, had rich radio past

By STEVEN JOHNSON and GREG OLIVER

Whether he was running the desk at a highly rated all-news radio station in New York or compiling seemingly trivial wrestling results from worn newspapers, Frederick Harrison Hornby was a legend.

And his friends and colleagues in both worlds say life will be a little poorer without him.

Hornby, one of pro wrestling’s preeminent historians, died July 15, 2015, at age 76. He had been in declining health in recent months.

The contributions Fred Hornby made to professional wrestling research were legion. He authored or contributed to just about every major record book, whether it was Gorgeous George, Danny McShain or Jim Londos. He was still on the prowl for obscure Buddy Rogers results a few months before his death.

“Fred was a world class historian,” said Tim Hornbaker, author of such books as National Wrestling Alliance: The Untold Story of the Monopoly that Strangled Professional Wrestling and Capitol Revolution: The Rise of the McMahon Wrestling Empire. “His research and record books will be an influence on the study of professional wrestling for the rest of time. I’m proud to say he was a friend and will miss him a great deal.” 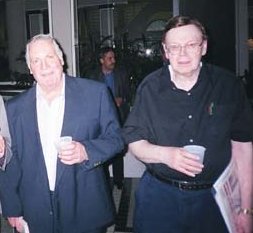 He was willing to share too, said Dotty Curtis, the widow of Hall of Fame wrestler Don Curtis. “Fred furnished me with so much on the history of my Don,” she said.

By Hornby’s own recollections, it was 1947 when he fell in love with pro wrestling, when a friend showed him a scrapbook filled with wrestlers. He bugged his dad to go to the matches at New York City’s Jamaica Arena, which was very close by their home. As televisions became more readily available, they could watch the glory days of wrestling on TV from Chicago on their small set with a round screen.

It meant that he was privy to tons of first-hand wrestling history.

Asked about Antonio Rocca and Miguel Perez, he launched into a story.

“Any time in the New York City area, they had to really be careful because it was primarily a Latin crowd, Puerto Rican, and all you had to do was rough them up a little bit. The illustration, of course, was at the Garden in November ’57 … I was right there down on the floor ducking the chairs,” recalled Hornby in 2004.

The reference is to the infamous bout on November 19, 1957, at Madison Square Garden, with a main event that pitted Dr. Jerry Graham and Dick the Bruiser against Edouard Carpentier and Antonino Rocca in New York’s Madison Square Garden. The post-match melee became headline news across the country.

The sight of blood got the crowd of 12,987 — ironically, the smallest of the season — riled to a fever pitch. Fans in the front rows charged the ring to get a piece of Graham and Bruiser. Other spectators splintered heavy folding oak chairs that had been braced together in groups of six. Bottles flew everywhere, and small fires set with paper appeared on the arena floor. Several fans climbed through the ropes as Bruiser and Carpentier policed the ring while Rocca and Graham continued their tussle.

“It got the Latin crowd more upset, yelling and screaming, so everybody got into it. That one particular night, Jerry and Tony, they overdid it a little bit. Some people got hurt, fortunately nobody got killed. Also fortunately, they didn’t have a capacity crowd for a change,” said Hornby. “Had it been one of those 20,900 nights, I think some people would have really gotten seriously hurt. But people had room to run.”

Even if you weren’t a wrestling fan in the New York area, chances are you knew Hornby’s name from his long career in radio news, especially as morning drive editor at WINS-AM. Former New York radio newsman Michael Kahn worked with Hornby and called him “a legend of the 1010 WINS all-news era.”

Kahn, who first met Hornby in the early 1980s, said his boss’s gruff exterior could put off some people but belied a gentle nature. “Personally, I’ll always remember Fred pacing around the newsroom at 90 Park, looking at the phone, waiting for [reporter] Paul Parker to call in, saying, ‘Come on Paul!’ ”

There was no question who was in control when a WINS announcer intoned “Fred Hornby at the editor’s desk” at the top of a newscast, Kahn said. “He’d say, ‘You do this, you go there.’ … In some ways, I learned how to run a desk from him.”

And run errands. Seems as though the subject of White Castle came up one day in discussion between Hornby and Kahn, who offhandedly noted that he lived not far from one of the hamburger joint’s franchises.

“The next thing I know, it’s like 5 o’clock in the morning. The drive-through window was the only thing that was open,” Kahn said.

“I’m bringing in excess of 100 hamburgers down the Palisades Parkway, over the George Washington Bridge to WINS for Fred and the others, all because I happened to mention White Castle to Fred. And I was glad to do it. That was Fred Hornby.”

Karen Hambel Montalbano also shared some memories of working with Hornby. “I’m not surprised at his expertise in wrestling — he was always copying wrestling materials after his first line-ups were done.” She said that Hornby initially didn’t know what make of the first woman working full-time in morning drive with him. “But then he became so comfortable with me he would always drag me into the edit booth with him to record his fishing reports,” she wrote in an email. “There were ‘road map’ line-ups, cooking frozen White Castle burgers at 7 a.m., telling me not to let John Montone say he will call me back when I had to wake him up when they needed extra help, trying to get Paul Parker to not follow the fire trucks and go to his assignments. Most of it was at loud volume, but after a while you realized it was because he cared about what he was doing and who he worked with.”

Longtime radio reporter Ross Klavan said Hornby mellowed after he nearly lost his life in a house fire. Before that … well, watch out, Klavan said in Facebook post.

“Before the fire, on the first morning WINS changed to its 20-minute format, Fred was totally enraged (as usual) and the newsroom was in complete chaos. Word got upstairs and the [general manager] came in to see what the trouble was …and Fred went over the editor’s desk, screaming, charging at him, until Alan Shaw and I grabbed him by his (then huge) arms and held him back. We were yelling, ‘No! Fred!’ while the GM did a crazy, clumsy back-peddle all the time sputtering ‘Why is that man so angry!?’ But that was Hornby.”

Hornby lived in Port Washington, NY, with his wife Edna. They had no children. Funeral arrangements are not known at this time.

STEVEN JOHNSON: Fred had a list of old Wrestling as You Like It magazines from the 1940s and 1950s that he wanted. Every time I went to a card show, I’d religiously take that list with me, hoping I could find some obscure issue for him. The time or two that I succeeded, Fred treated me like I’d just uncovered the Dead Sea Scrolls.

GREG OLIVER: I really got to know Fred at the Pro Wrestling Hall of Fame induction weekends in Schenectady and then Amsterdam, New York. He was always there for a phone call, too, helping me better understand wrestling history, or sharing a rumour that he’d heard for me to ask a wrestler about. He was a collector in a way that I’m not, and knowing that I did travel to Las Vegas for the Cauliflower Alley Club reunions or other events, like WrestleMania, he’d ask me to snag him a program. Not a problem, Fred. Happy to help.