Mat Matters: When I realized I couldn’t be Roddy Piper

Constant reader, you have followed the tales of my childhood struggle to watch wrestling as a kid and the main figure that fueled this wrestling obsession was “Rowdy” Roddy Piper. In fact Piper was such a mega idol to young me that I did anything I could to emulate the Scotsman (by way of Manitoba). 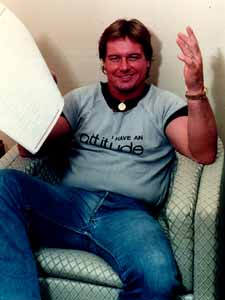 As you know from my previous article, Mat Matters: Confessions of a modest collector, Piper made such an impact on my life on a March afternoon in 1985 that the then fifth grader instantly fell in love with professional wrestling. I wanted to be Roddy Piper. Often on my walks to and from school I pretended to be Piper. I imagined strutting to the ring with a self-confident grin, head cockily moving left to right and ready to slap the heck out of the low life’s who dare touch me.

It was at this time that I made some unusual fashion choices. In the back of my mother’s closet were kilts that were old and didn’t really fit her anymore. I took to wearing those kilts, in my room, to be just like Piper. I examined my look in the mirror and tried to tell myself that I was incredibly cool. Perhaps Roddy would want me as a side kick; a sort of Robin to his Batman.

When my mother discovered me wearing her kilts she was horrified. I think she thought I was embarking on a life as a cross dresser. How could she not understand that Roddy Piper wore a kilt and he was very manly.

Over the next two years I also tried to create my own Hot Rod t-shirts that Piper wore to the ring. I dug up all of the white t-shirts I could find in my house and planned out my way to emulate Piper. After many hours of examining the Hot Rod t-shirt in magazines I began to practice drawing the logo on paper. I soon became very proficient at drawing that lightning bolt, orange, red and yellow design.

With my confidence bolstered I found some markers and went to work drawing the logo on my collection of white t-shirts. After five or so attempts I had made an outlined masterpiece. It was at this point that I decided I would wear my new shirt while I was on the pool deck at my next swim meet.

Not only did I wear my shirt, but my mother got a good look at it too. Good thing I wasn’t wearing a kilt. Very soon my mother had a serious discussion with me about destroying perfectly good t-shirts. She was right. It was a waste of my parents’ hard-earned dollars, but she didn’t understand that I yearned to be Roddy Piper.

In grade six I switched schools and one day a classmate strolled in wearing a Hot Rod t-shirt. It was thin, kind of grubby and the collar was wonky, but I coveted that shirt. It wasn’t as if you could just get those shirts anywhere. You either had to mail order the shirt from the WWF or go to a show. Readers, we all know I was not going to a show (as told in my wildly-popular article Mat Matters: Fond memories of an AWA ballpark show in 1988).

Soon enough I convinced the kid that he should sell me the shirt. After an exchange of cash and a sizable chunk of WWF trading cards I owned the shirt. When I got it home I looked at my Piper pictures that I had on the wall and I saw the one where he had cut his shirt into a muscle shirt. Yes, I too would show off my bandy arms and be like Piper. After some alterations my opus was complete. I was the man.

You would think that would be enough, but no. You see I was immersed in being like my idol. It was around this time that I changed my hairstyle. I decided that I needed to start parting my hair down the middle and feathering it back. I even consulted with my barber who told me my hair could be trained to stay back like Piper’s but only with diligent brushing (thanks for nothing, Al). I spent hours brushing my hair. Sadly, it worked.

I took my new look to the park, the swimming pool, the mall, the donut store and it produced absolutely no reaction. A butchered Hot Rod shirt and feathered hair parted down the middle was not enough. Sadly, it was as far as I could take it.

Very soon the t-shirt went in the drawer. I shaved my head (it was better for swimming is what I told myself). I realized that I could not be Roddy Piper. Maybe one day I would meet him and that would be good enough for me.